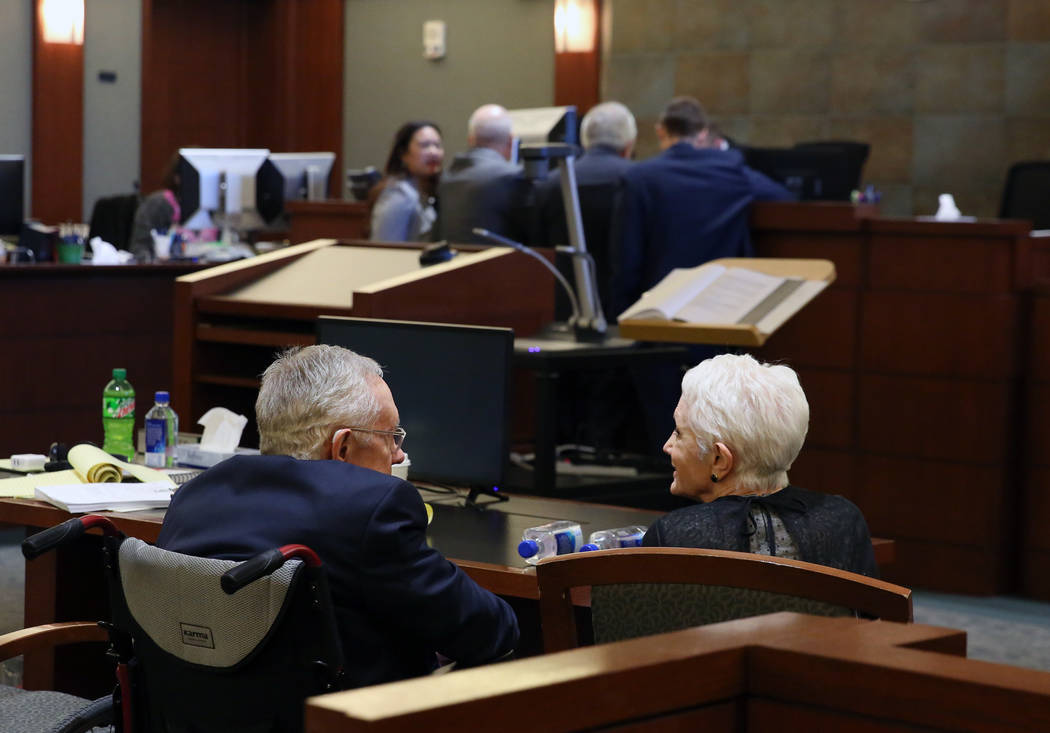 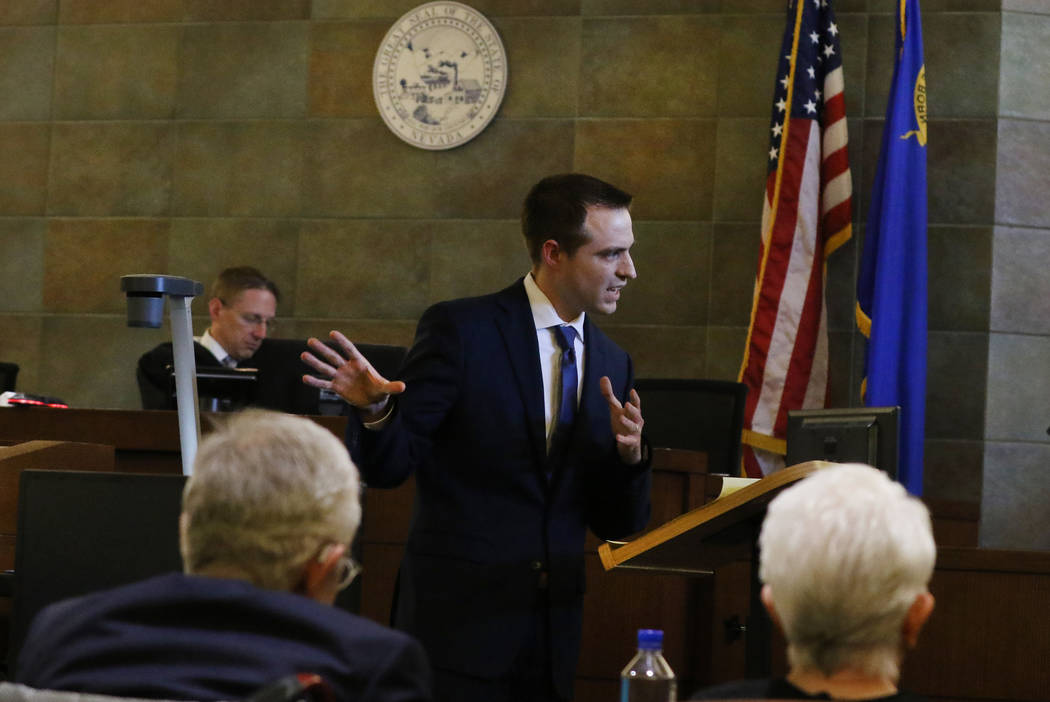 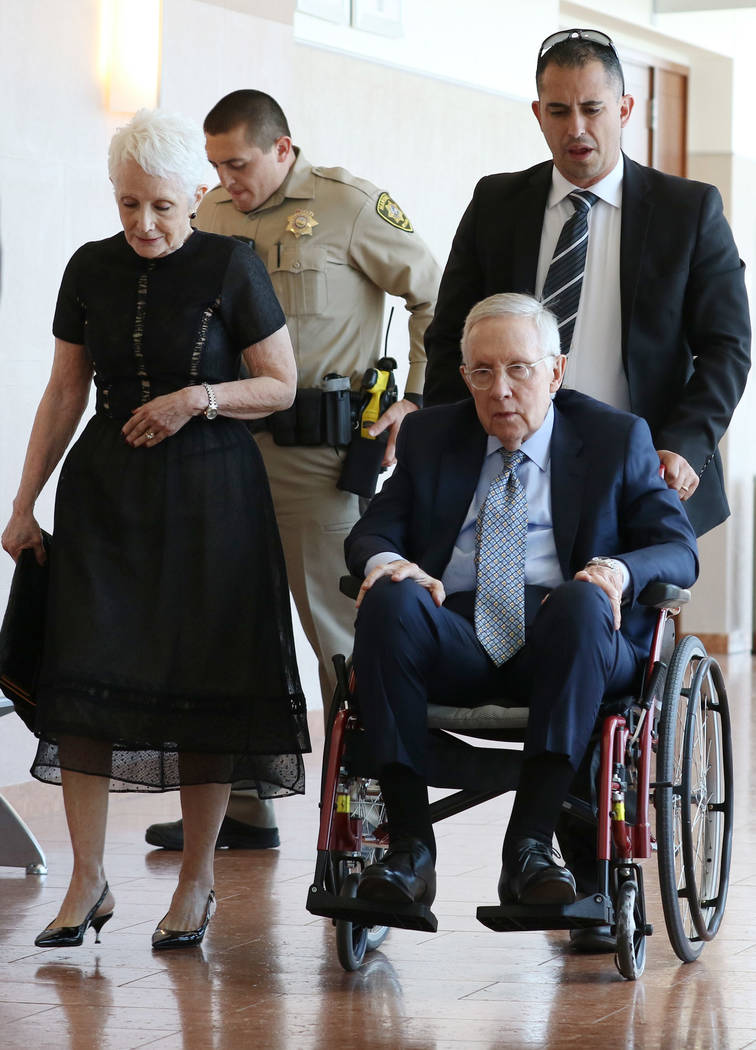 A Las Vegas jury rejected former U.S. Sen Harry Reid’s claims in a civil case against the makers of a resistance exercise band after about an hour of deliberations Friday.

Reid was injured while using an exercise band and blamed the injuries for ending his political career. He and his wife of nearly 60 years, Landra Gould, attended closing arguments Friday but did not return to the courtroom for the verdict.

One of the couple’s lawyers, Jim Wilkes, who called himself a “good friend” of Reid’s, said he expected that the former senator would respect the jury’s decision.

“He doesn’t want other people to have happen to them what happened to him,” Wilkes said.

Reid’s family threw out the band after he was hurt. Months later, he and Gould lodged a product liability lawsuit against three defendants: Hygenic Intangible Property Holding Co., the Hygenic Corp. and Performance Health LLC.

But jurors decided that the defendants did not manufacture the exercise band involved in Reid’s accident.

During closing arguments Friday, another of Reid’s lawyers, Colin Esgro, told the panel of three women and five men that the band was “unreasonably dangerous” and that Reid should have been warned that the band could slip out of his hands.

Reid incurred a little more than $238,000 in medical costs from the injuries that he suffered in January 2015, Esgro said.

But Laurin Quiat, a lawyer for the TheraBand makers, argued that Reid caused his own injuries because he used the band “contrary to every instruction he had been given.” The lawyer also said Reid had not been truthful about what happened and whether it led to his departure from politics.

After the verdict, Quiat said, “My client always believed in the product, believes that the product is safe, not unreasonably dangerous for anyone, and they stand behind it.”

Reid testified during the two-week trial that he was blinded in his right eye after he lost control of a TheraBand and struck his head on a bathroom cabinet in his Henderson home.

“This case is about taking responsibility for one’s own actions,” Quiat argued. “Sometimes you have to look in the mirror.”

Esgro told jurors that Hygenic applied for a patent for a band with handles two years before Reid’s injuries, showing that the band makers knew the product was harmful.

Quiat argued that Reid had a “duty to preserve” the band in question and that “it can’t even be confirmed as to who made” the band.

According to Reid’s lawsuit, with losing vision in his right eye, he suffered a concussion, broken orbital bones, severe disfigurement to his face, bruising and lacerations on his face, hand injuries, scarring and broken ribs.

About two months after his injury, Reid, who was Senate minority leader at the time, announced that he would not seek re-election. He had served in the Senate since 1987.

Reid spent several hours on the witness stand last week, telling jurors about his childhood in Searchlight and his days as a boxer, lawyer and Nevada Gaming Commission chairman. He testified that he had been diagnosed with pancreatic cancer, which is in remission.

Quiat questioned Reid’s testimony by playing short videos of news conferences and interviews in which Reid said the band broke and had played no role in his retirement.

“The one thing we do know is he struggles with telling the truth,” the lawyer said.

Gould testified about how, in the weeks and months after the accident, she helped care for her husband.

Reid testified that the injury occurred after he had looped an elastic resistance band through a metal handle on a glass door in his bathroom while performing an exercise routine. He testified that he lost his grip on the band, “spun around” and slammed his head on the cabinet.

Gould said she had the band thrown out before knowing the couple would file the civil complaint.

Wilkes, who represents Reid, attacked Quiat for trying “to shame a man for falling because he’s trying to exercise.”

Of the verdict, he later said, “I may not agree with the outcome, but I agree with how we got there.”

Asked whether the verdict may have been different if the band had not been discarded, Wilkes replied, “That’s called speculation. There’s no way I can say.”