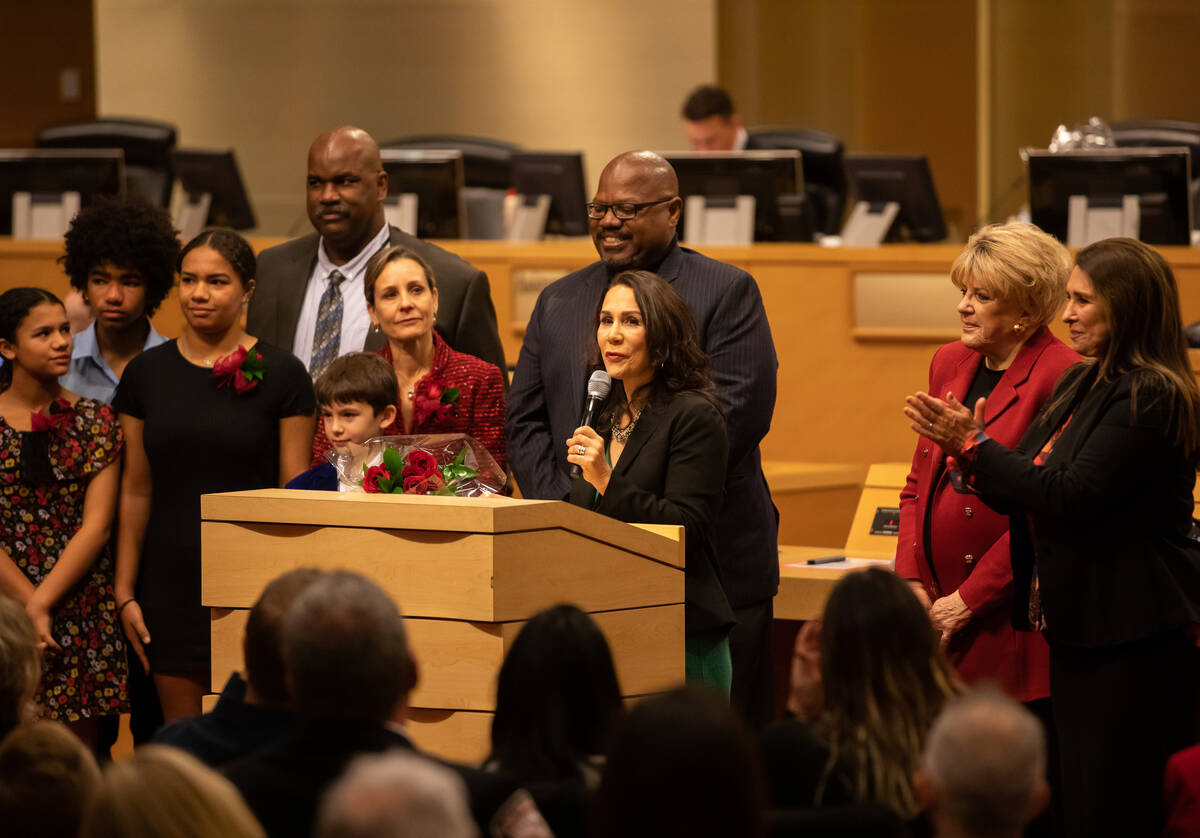 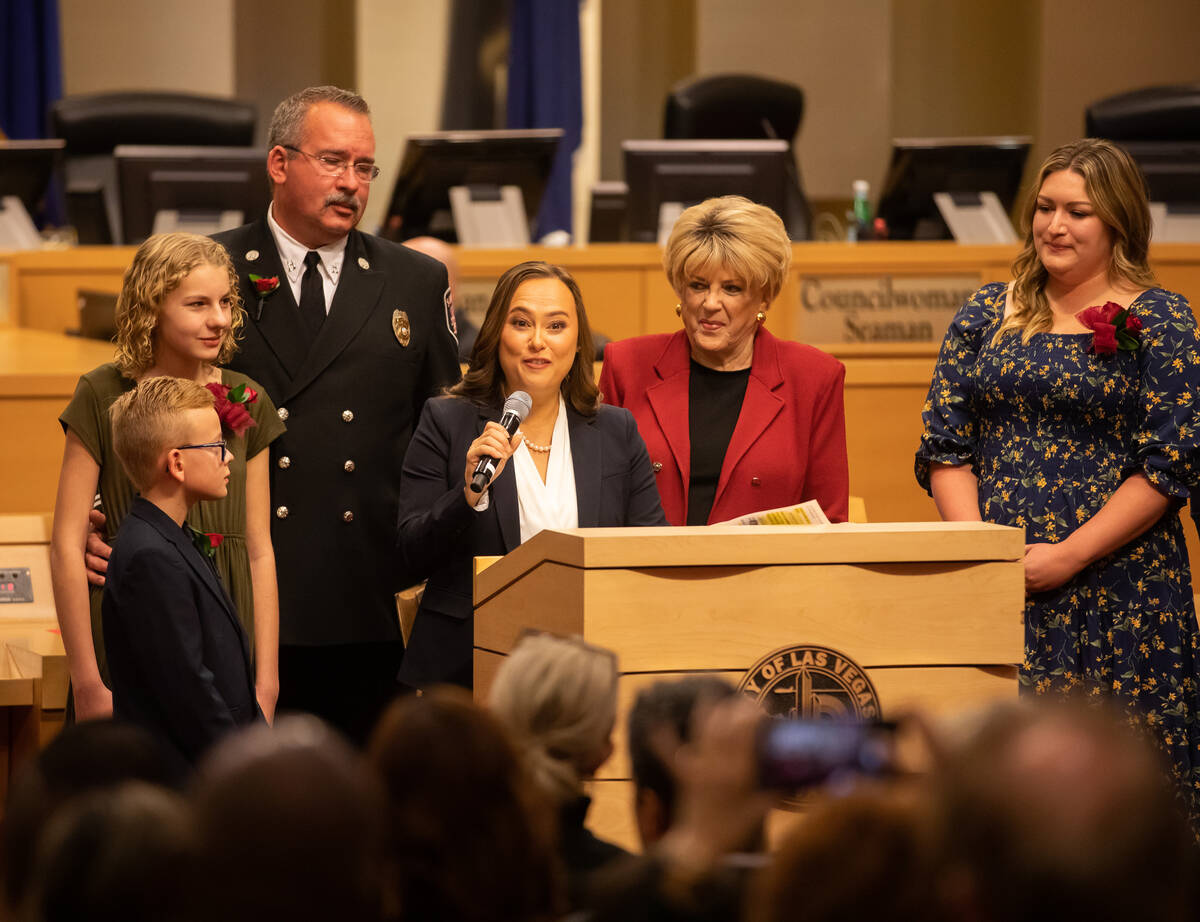 Filing paperwork to run for the Las Vegas City Council is perhaps the easiest part of the long, uphill process.

Candidates lean on resumes to pitch their platforms, hoping to earn enough votes. As soon as their election is certified, a phone call from the city clerk informs them that it’s time for orientation.

Newly-inaugurated Councilwomen Nancy Brune and Francis Allen-Palenske know they were as ready as they could be when they took an oath of office and presided over their first meeting Wednesday: one is a policy expert, founder of the Guinn Center research and policy think tank, while the latter was twice elected to the Nevada Legislature.

Still, they acknowledge a wide learning curve. But the councilwomen, who became friends on the campaign trail, are tackling it together.

“There’s a lot to learn,” Brune told the Review-Journal after Wednesday’s light-agenda meeting. “I warned everyone, I ask a lot of questions.”

To get the lay of the land, Brune (pronounced “Brew-knee”) and Allen-Palenske have attended lengthy, at times strenuous, City Hall meetings.

There, they’ve been handed “the largest binders you can find at the office supply store,” Allen-Palenske said. “And they give them to you until you can’t carry them anymore.”

“It’s like drinking from a fire hose,” said Allen-Palenske, whose husband is a captain in the Las Vegas Fire Department.

The councilwomen will be taking action on behalf of 667,679 residents, and a city with operating and capital budgets totaling nearly $2 billion in the current 2023 fiscal year, according to city-provided figures.

They’ll likely be part of tough negotiations and disagreements.

Take the years-long dispute with the developers of the defunct Badlands golf course, with court liabilities currently estimated at $87.45 million, or $130.97 per Las Vegas resident.

Mayor Carolyn Goodman wrote in a statement this week that the city has attempted “to reach a reasonable resolution, and move forward in a positive way for every Las Vegan.”

She added: “In the end, I await the Supreme Court’s last word on whether the City Council’s discretionary approval and denials of requests concerning the developer’s fully functioning private golf course — purchased for $4 million — should put the taxpayers of Las Vegas on the hook for hundreds of millions of dollars in alleged damages.”

In a phone interview, Goodman highlighted the diverse voices in the council, noting that she was “thrilled” to sit next to the new councilwomen, whom she called “very bright people.”

The council now includes five women, a Black man and a gay man.

“I think it’s an exciting time,” Brune said. “The City Council continues to reflect the diversity of Las Vegas.”

Goodman shared what words of wisdom she had for her two new colleagues.

“Look at the general public as a whole” and “my advice is to check with our legal office, with planning, state, federal and city law” when developing proposals.

Audience members at the packed City Hall pulled out their phones, and pointed their cameras to the dais as the morning ceremony commenced.

Loved ones surrounded Allen-Palenske and Brune as the mayor twice administered the standard pledge. The women — hands on family Bibles — answered “I do” after Goodman read the official oath of office.

They were then gifted roses and handed certificates of election to applause.

“I come from a long line of public servants,” Allen-Palenske said in her first public remarks as a councilwoman, paying homage to her great grandmother who served as a nurse in World Ward I, her police officer father, her Korean immigrant mother, and others who’ve served in the military. “I will continue their legacy of love and service to a cause larger than ourselves.”

Then she addressed Las Vegas residents: “I’ll be a diligent servant of the people, my door to the office will remain open to anyone who would like to speak with me.”

Allen-Palenske told the Review-Journal afterward that she’s learning to balance her newly packed schedule with her family life. Two of her three children are still minors.

She maintained that public safety continued to be her top priority for Ward 4 in the west valley.

Allen-Palenske knows there’s more learning to go, and more nights at home where she takes a highlighter to passages in the large binders.

“Nothing at City Hall is like the Legislature,” said the former assemblywoman. “I have a feeling I’ll be learning every day here of my four-year term.”

‘Looking forward to the challenge’

Brune told those gathered at City Hall that Wednesday was a special day for which she had “tremendous gratitude.”

“To be up here really is bigger than me,” she said. “It takes a team effort and the captain of my team is God.”

She described Ward 6 in the Centennial Hills area as “the best ward in Las Vegas.”

Brune noted her vision of “putting people before politics,” adding, “I look forward to working hard to continue to earn your respect.”

Later, she told the Review-Journal that she will have to translate policy to politics, which she felt nervous about. “But I’m looking forward to the challenge,” she said.

Brune lamented that her late father, a Latino who fought for civil rights in the Chicano movement, couldn’t be there to see her take the oath of office.

“I think it was his dream that we would run for office,” she said about herself and her sister, who is considering running for office in Texas. Her mother, who had planned a trip to the Galapagos Islands before anyone believed her daughter’s election could materialize, also wasn’t there.

Thus far, Brune has heard from constituents who’ve highlighted issues at parks. She kept on a staffer of former Councilwoman Michele Fiore, whom she replaced, for a transitional period. Starting next week, the new councilwomen said she will dive further into the workings of each city department.

She also plans to host Fiore’s regular meetings with constituents to help plan ahead.

“I listen before I speak, so I want to go to the process of just hearing and then figuring out what makes sense to address or tackle in the first 100 days,” Brune said. “And then the next 200 days, etc.”