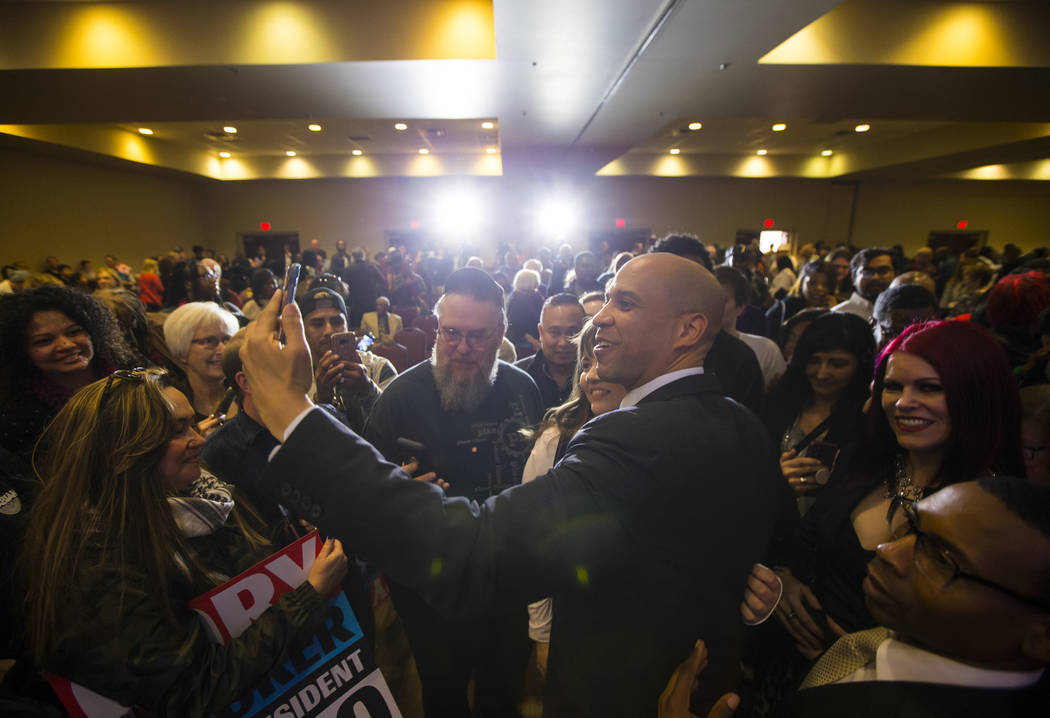 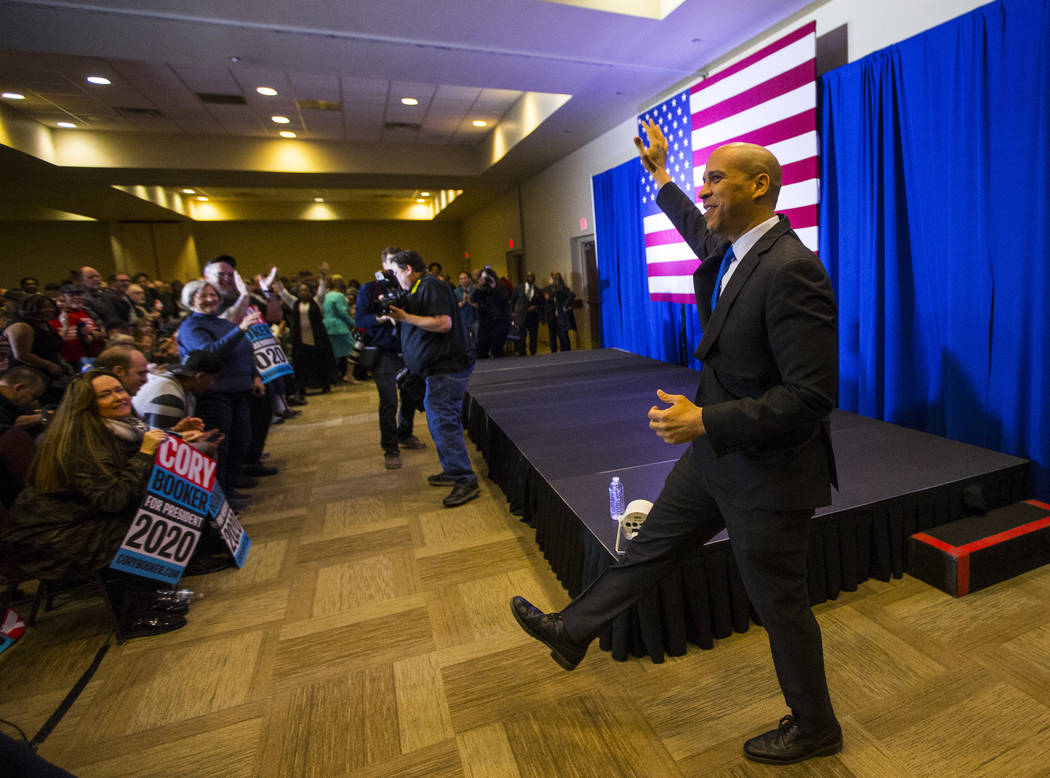 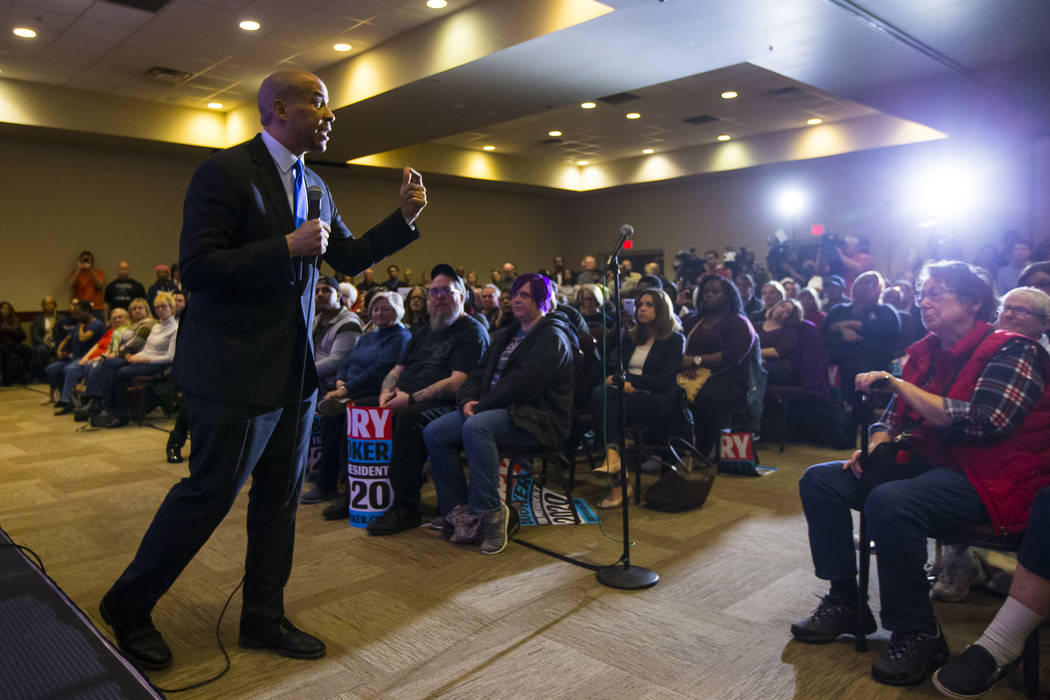 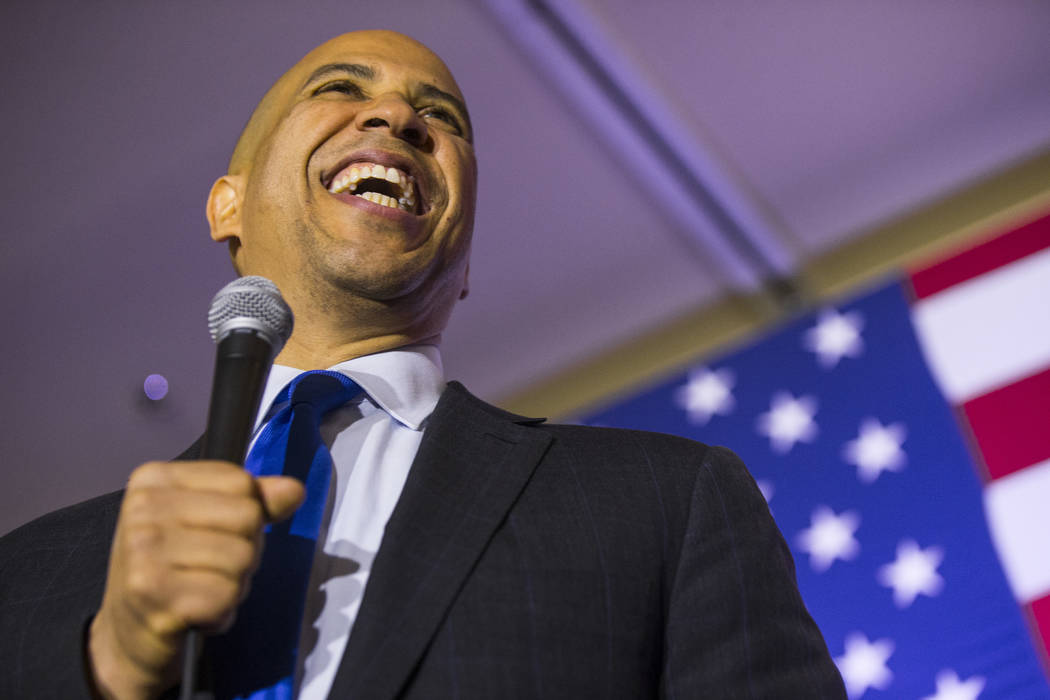 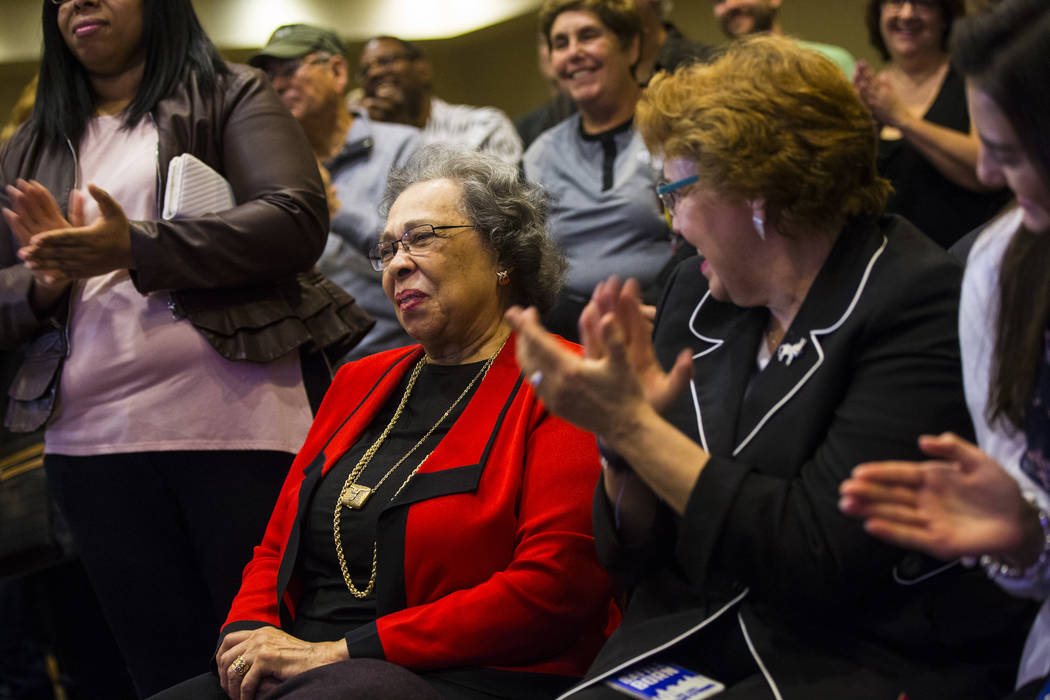 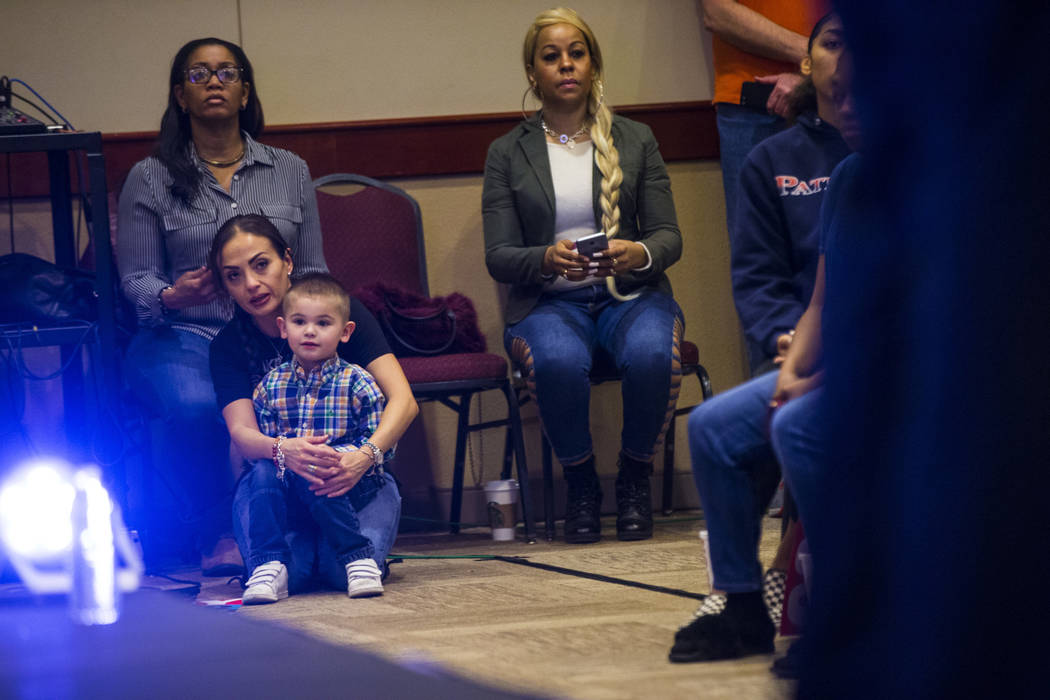 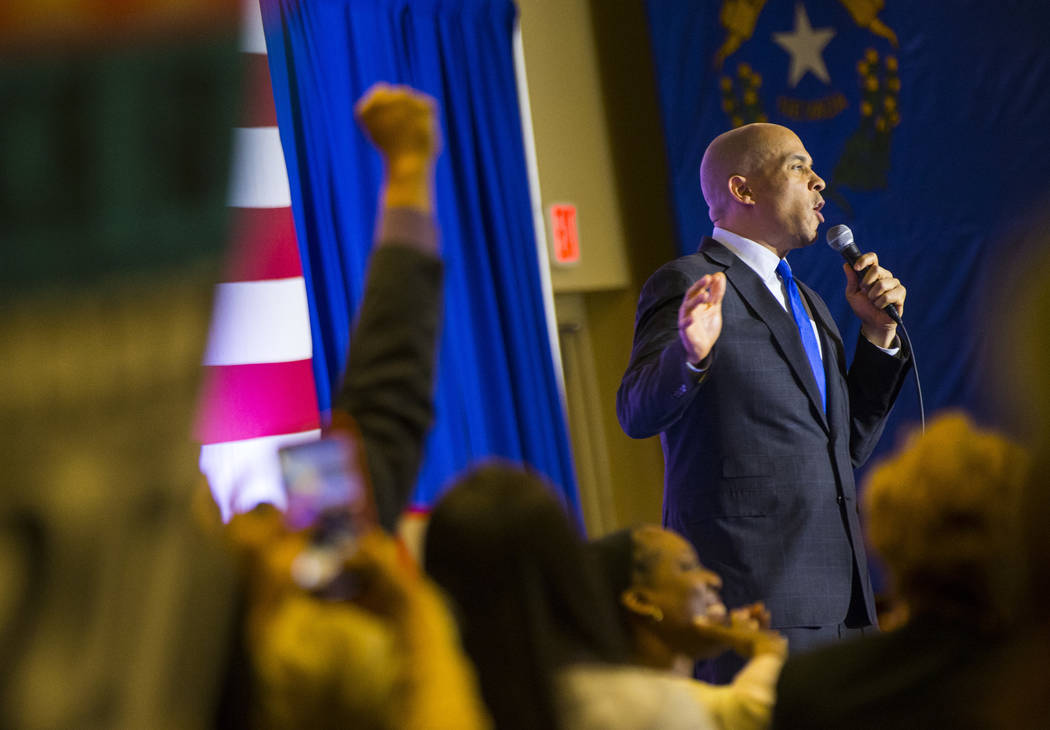 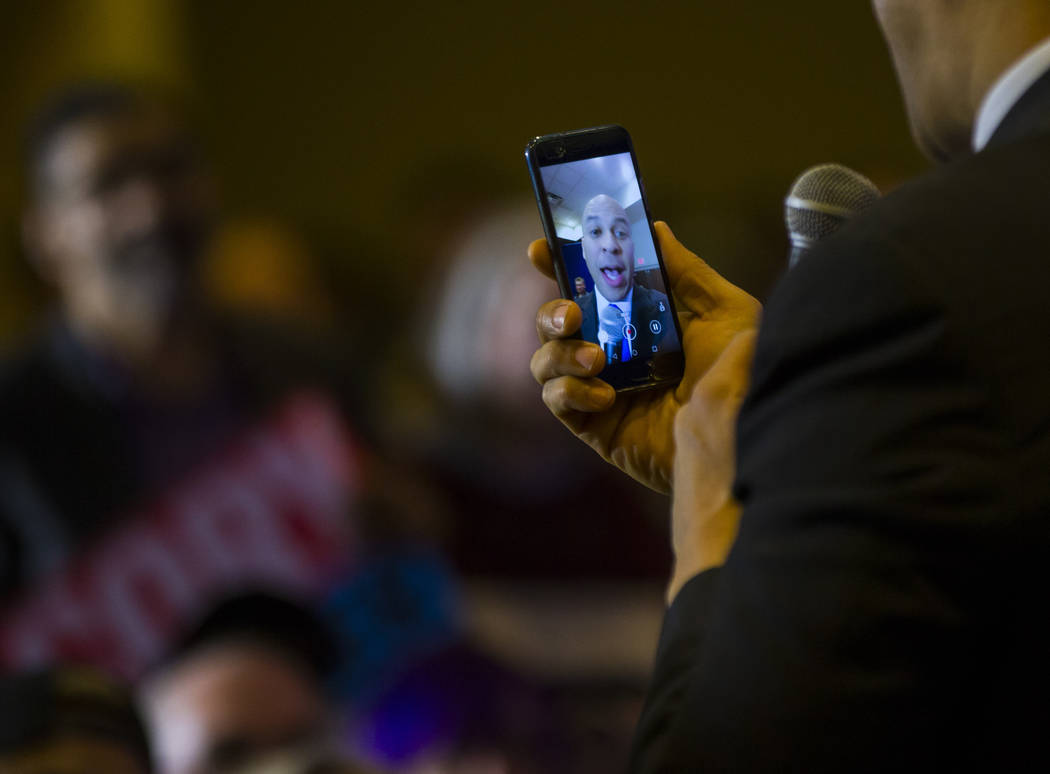 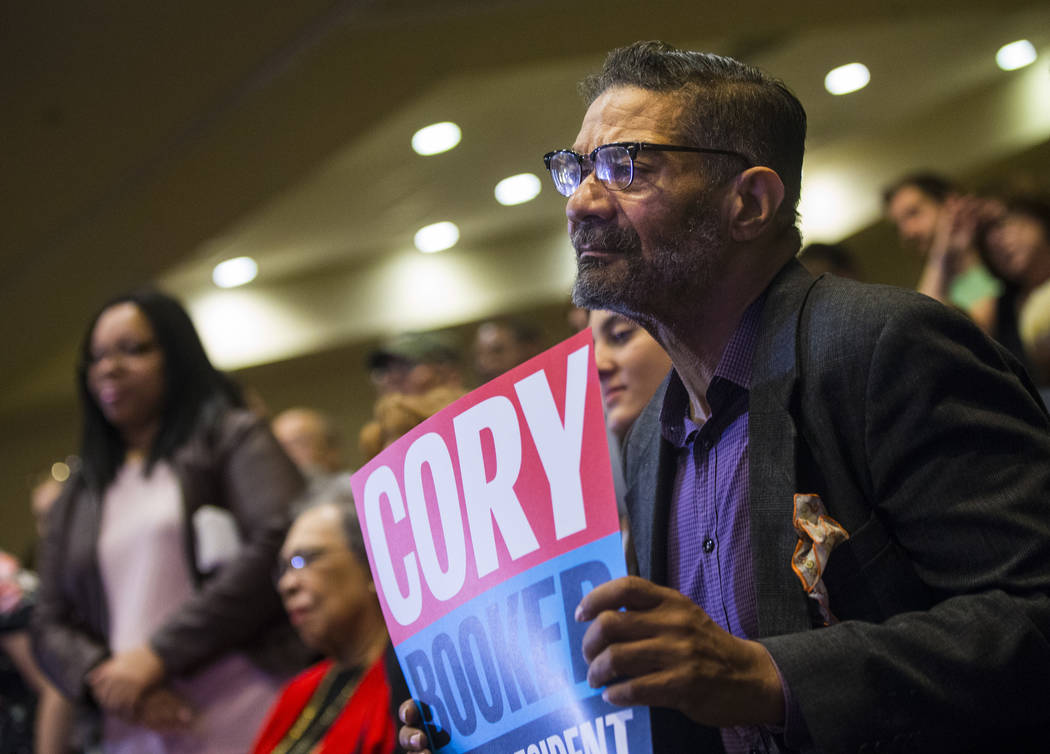 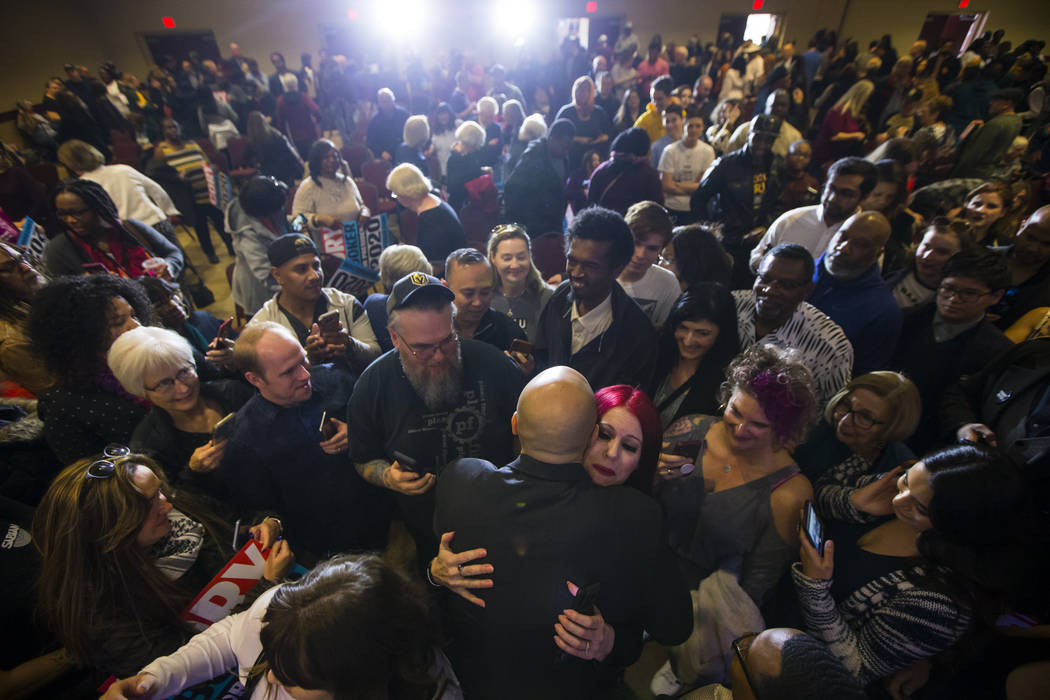 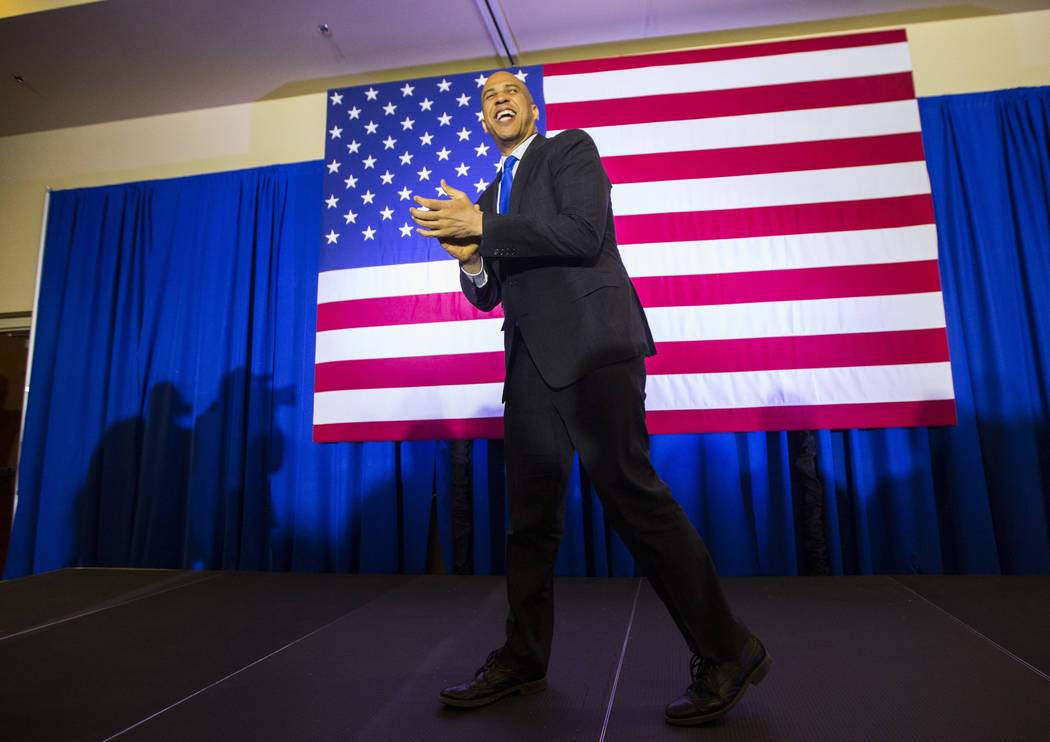 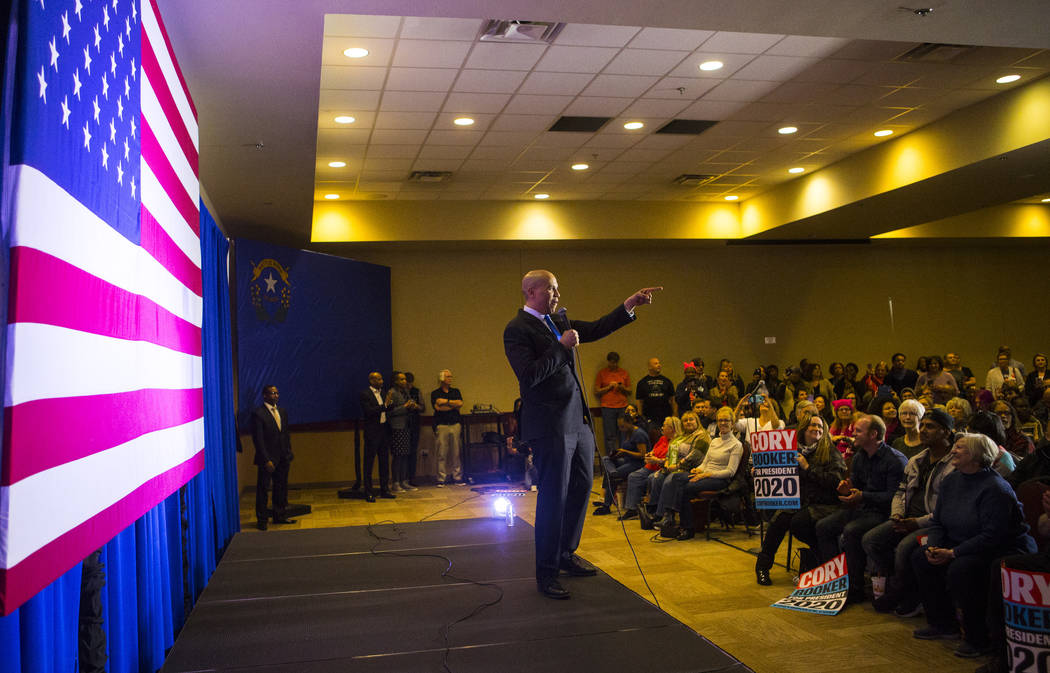 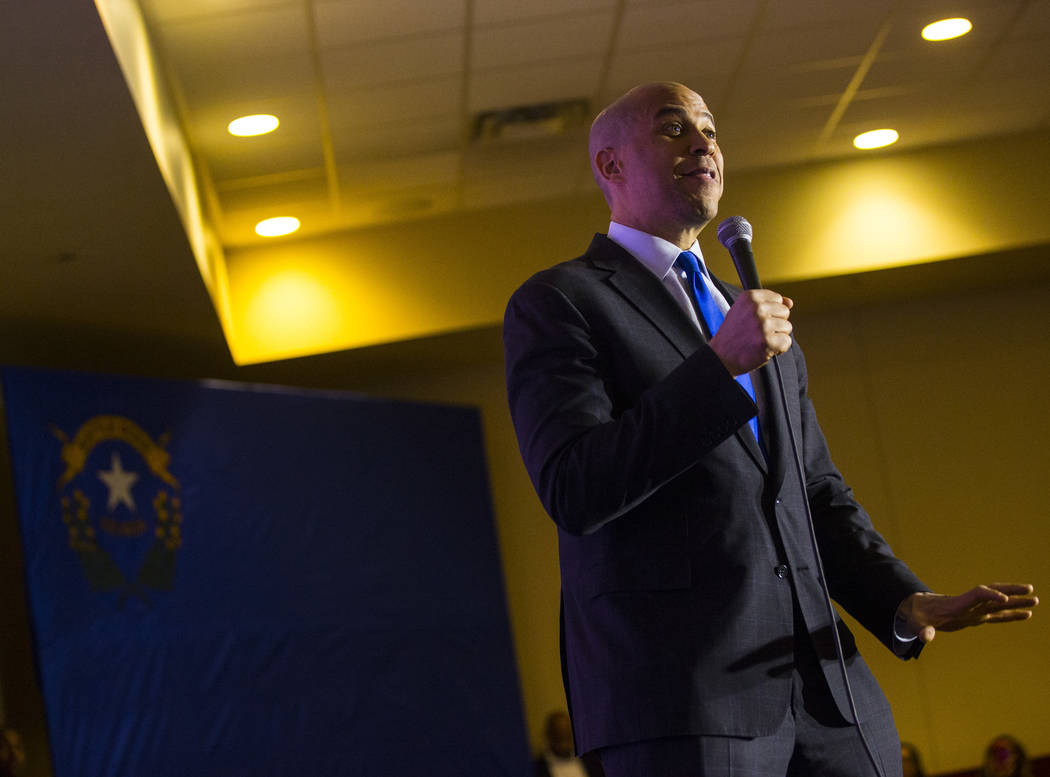 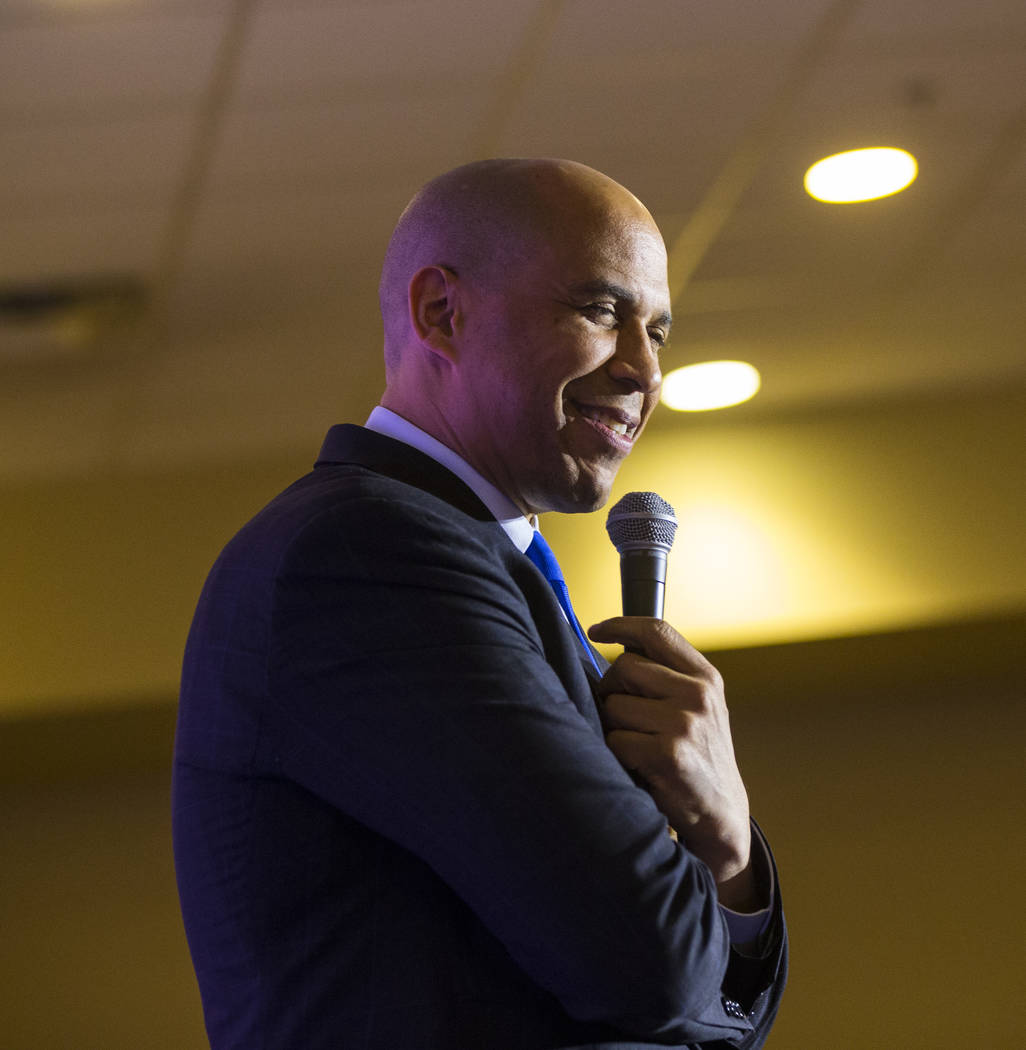 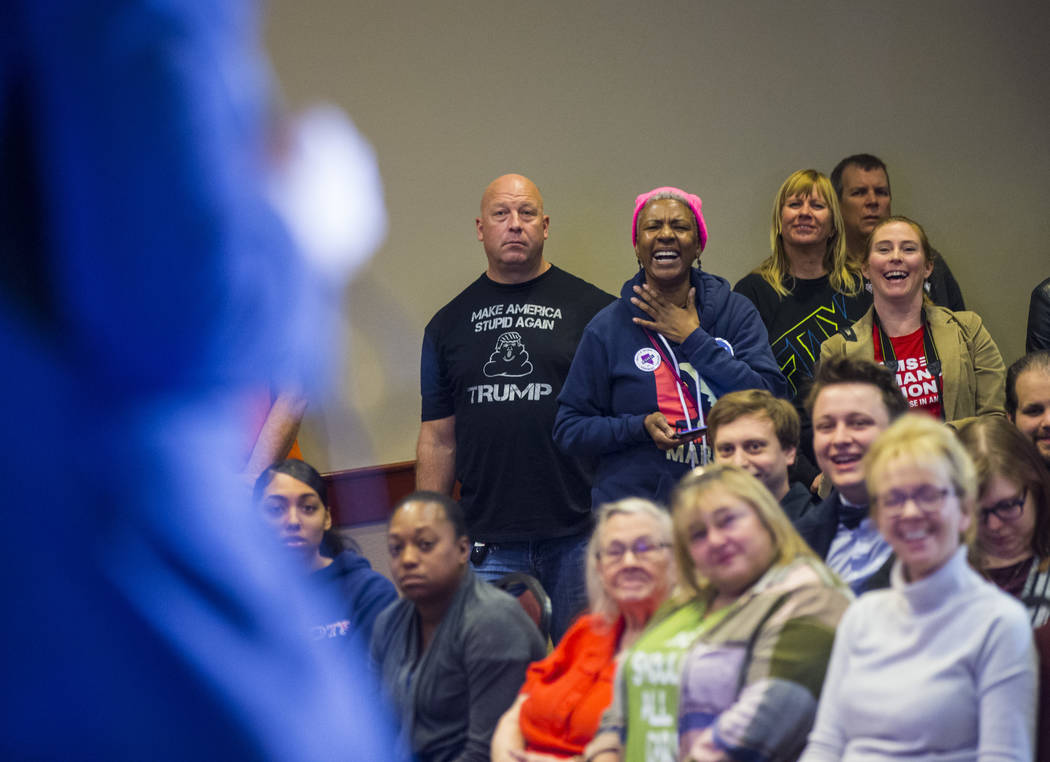 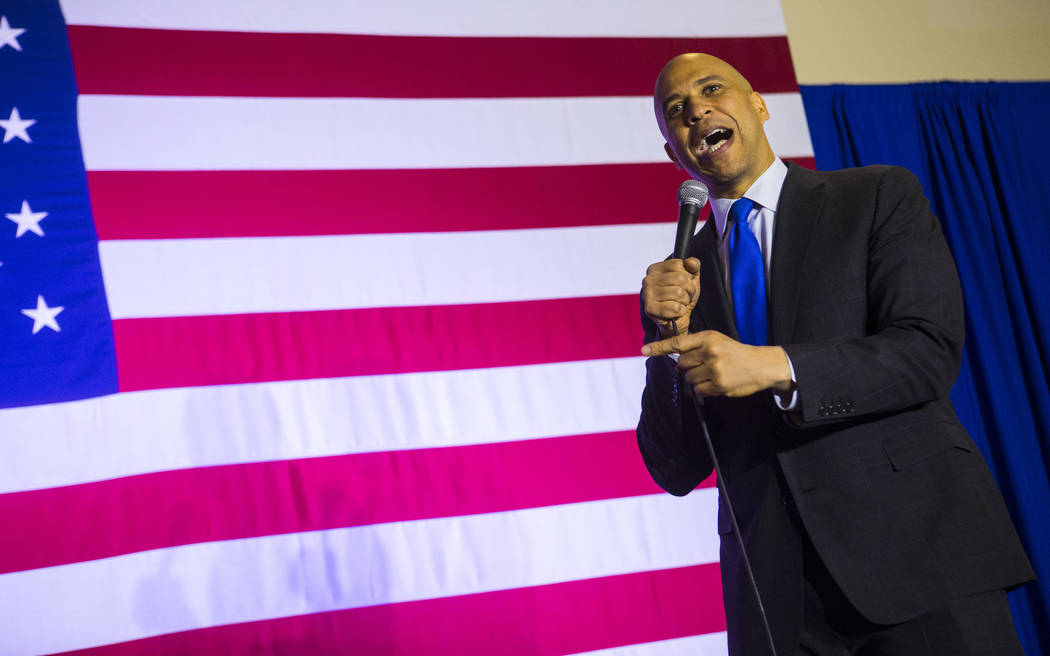 Presidential hopeful U.S. Sen. Cory Booker campaigned in North Las Vegas on Sunday afternoon, speaking to an audience of about 250 people that included his mother.

Decades before moving to Las Vegas in 2013, Booker’s parents faced discrimination while searching for a house in New Jersey in 1969, just after Booker’s birth. His parents’ refusal to be driven away from white neighborhoods, paired with the zeal of a volunteer lawyer who helped them overcome that discrimination, have informed Booker’s platform, he said.

“We are here as this incredible nation not because we’ve been bereft of injustice and bigotry and hatred,” said Booker, a New Jersey Democrat. “We have come this far because we joined together to overcome that.”

Booker’s parents would not have been able to move into his childhood home if it weren’t for a white New Jersey organizer who was inspired by a civil rights march in Birmingham, Alabama, that he had seen on TV, Booker said. Instead of being paralyzed by frustration, the man took action and recruited volunteer attorneys to enforce the Fair Housing Act.

“Does he allow his inability to do everything to undermine his determination to do something? No,” Booker told the crowd at the Nevada Partners event center, 710 W. Lake Mead Blvd. “He gets up and says, ‘I guess I can’t afford a plane ticket to Alabama, I can’t close my business, but I can do the best I can, with what I have where I am.’”

As president, Booker said, he would fight for universal health care, universal preschool and criminal justice reform, including expunging the records of people convicted of low-level drug crimes in states where recreational marijuana has since been legalized. He would work to pass responsible climate policy — including retrofitting buildings — to create jobs and expand the economy while reducing the nation’s carbon footprint, he said.

Booker said he wants to reform student loan programs and reduce student debt so that college is more affordable, as well as invest in training for professions that don’t require a degree.

Jane Hansen of North Las Vegas said she attended Sunday’s event because she wanted to hear more than sound bites from the candidate. After Booker left the podium, Hansen said she was most impressed by his push to remove corporate funding from politics and to explore funding training for vocations that don’t require higher education.

“I don’t see college as a solution for everybody,” Hansen said.

Booker said the past couple of years have been the most hopeful of his life. Before President Donald Trump took office, people were too “adjusted” to injustice, he said.

“This has been an incredible two years for me, because I’ve seen people who have never been involved in politics before that are getting involved,” he said.

Booker recalled seeing people organize at U.S. airports to protest Trump’s travel ban and welcome Muslim families. He hopes that his message will energize voters to follow in the footsteps of a white lawyer in New Jersey who was moved from his couch by the racial injustice he witnessed on TV in the 1960s.

“Every moment in your life, you have a choice to make to accept things as they are or take responsibility for changing them,” Booker said.

In a statement Sunday, the Republican National Committee criticized Booker’s proposed policies as extreme, unrealistic and costly to taxpayers.