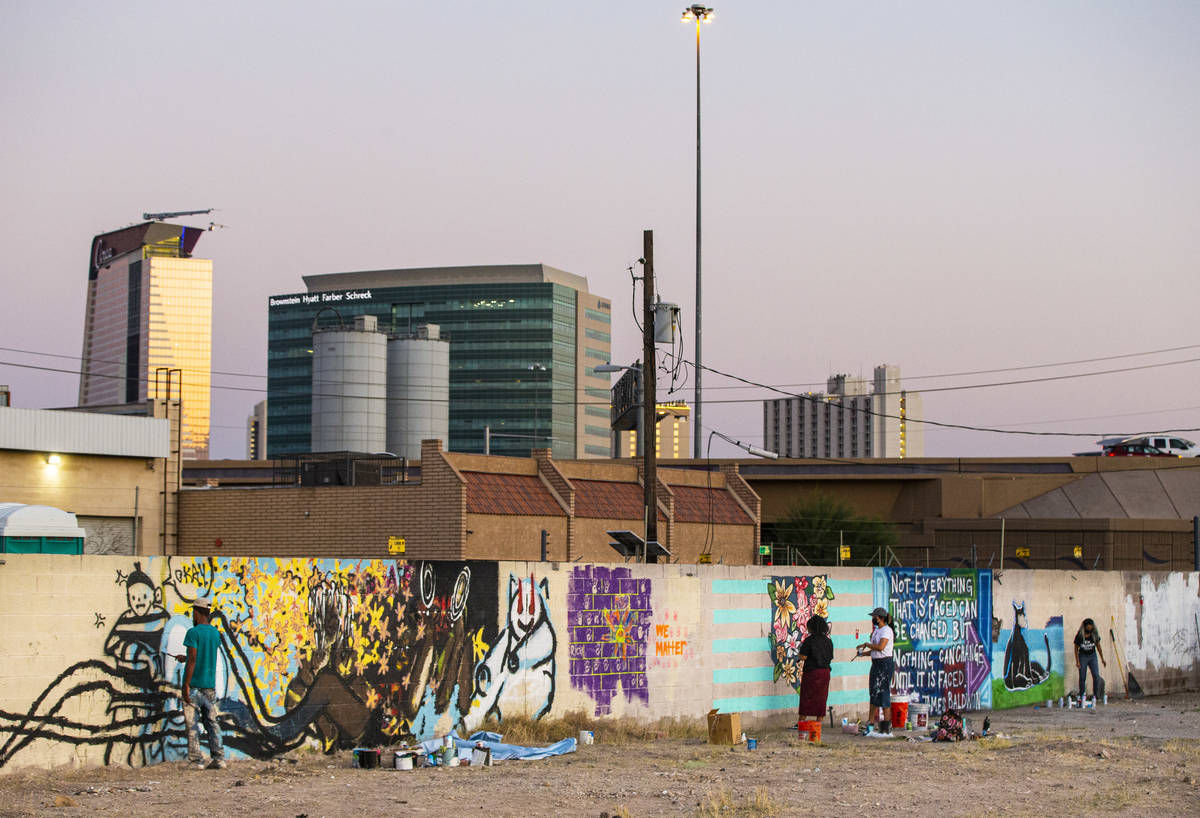 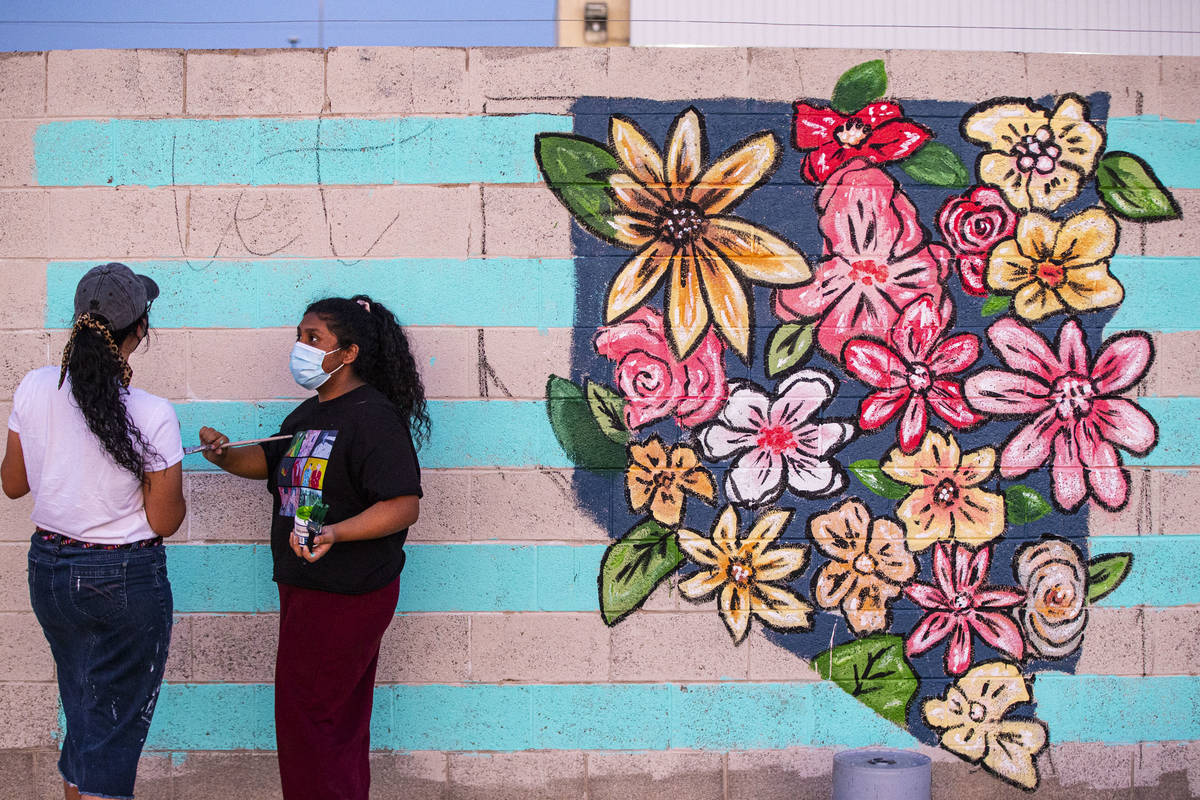 Artists Angie Castillo, left, and Vivian Avila work on a mural at the site of the former Moulin Rouge in Las Vegas on Saturday, Oct. 3, 2020. (Chase Stevens/Las Vegas Review-Journal) @csstevensphoto 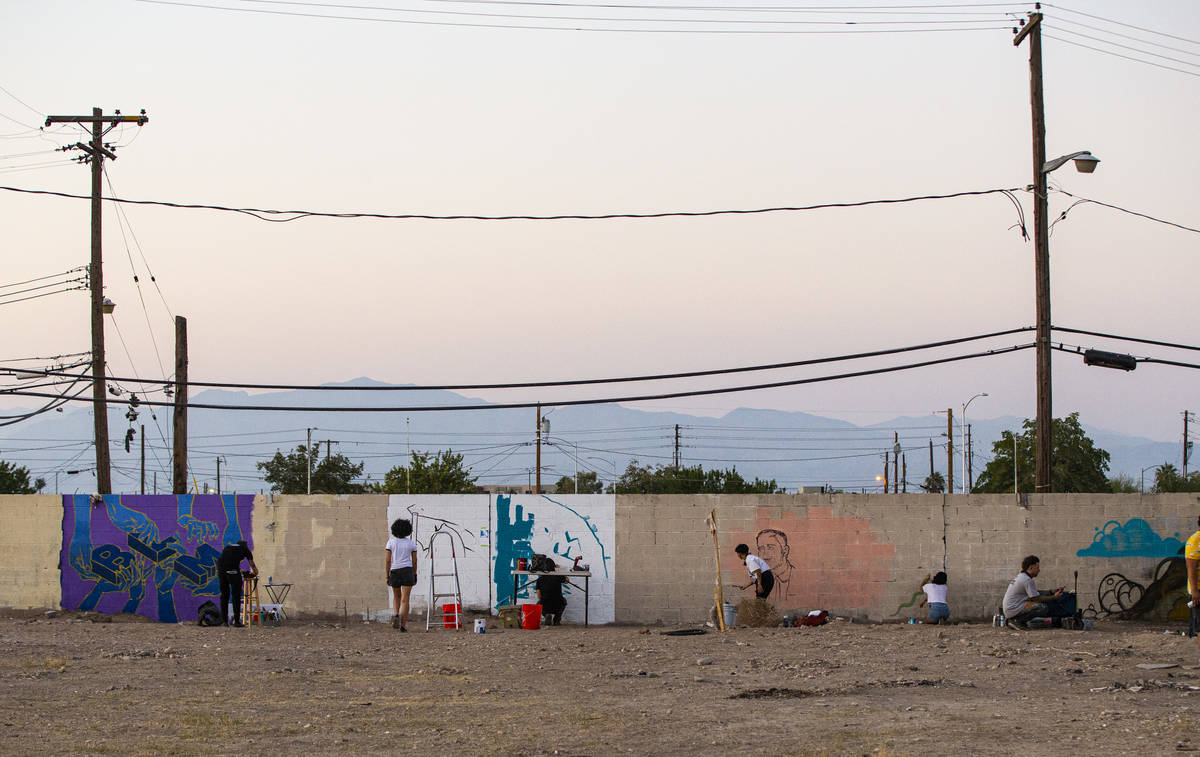 The Southern Nevada Regional Housing Authority stepped forward as an unlikely candidate last year to buy the site of the old Moulin Rouge hotel, intending to construct a tavern-style casino and, as a public agency with no experience in gaming, find a partner to manage it.

But the state’s largest public housing authority ultimately abandoned its plans in October 2019, when Executive Director Chad Williams said that purchasing the land that once held the first racially integrated casino in Las Vegas was no longer in the agency’s best interest.

Now a potential deal is back on the table: The authority’s board on Oct. 15 approved purchasing the 15-acre plot downtown for $3.9 million, much less than a 2019 appraisal of $6.5 million.

“If you think about it, this is the best opportunity for we, the people, to even have a voice for what goes on on that site,” said John Johnson, the executive director of a social services nonprofit, Empowerment Through Training and Education, who is handling community outreach and marketing for the proposed acquisition.

Still, the proposed deal is not currently preferred over an offer made by an Australia-based private investment firm that could be finalized Nov. 9, according to Kevin Hanchett, the court-appointed receiver for the property.

The firm, BBC Capital, is proposing $3.1 million for just three of the four parcels that comprise the site, with an option to buy the fourth. Its offer includes taking on nearly $2 million plus interest in liens that stem from demolition and other work directed by the city of Las Vegas, and it proposes to close the deal more quickly than the authority.

Hanchett said Thursday that the authority’s proposal is problematic for two key reasons: The seller will be expected to assume more than $2.8 million in hard costs and the 180-day window to close a deal is too long.

Investors are unlikely to recover any money if the seller assumes the hard costs in the deal, according to Hanchett. Since an effort to redevelop the site failed in 2004, approximately 300 investors represented by the receivership have been waiting to be repaid.

“At the end of the day, it’s up to the judge,” Williams said. “Our position is we’re offering to purchase it obviously in the best interest of the community.”

Over the years, seemingly promising bids to purchase the old Moulin Rouge site have foundered, mostly due to financial hiccups from would-be buyers. Clark County opted not to buy the site three years ago after community criticisms over its plans. The property, on Bonanza Road and east of Martin Luther King Jr. Boulevard, is now mostly a vacant plot and a razed remnant of the casino’s heyday in 1955.

It was not clear what exactly BBC Capital’s plans for the land would be, and an email sent to a firm representative was not immediately returned. One of the parcels it proposes to acquire is attached to an active non-restricted gaming license.

According to Williams, the housing authority’s plan is that the four-parcel site will house three main components: a small casino and museum that pays homage to the rich history of the Moulin Rouge; the authority’s relocated headquarters; and new affordable housing properties. The agency owns the Marble Manor public housing development adjacent to the Moulin Rouge property.

The reasoning behind the project remains the same as it was year ago: Williams sees it as an outside-the-box approach to drawing in revenue for the housing authority while reducing both the agency’s reliance on federal dollars and its roughly $150 million maintenance deficit.

In the past year, two critical changes renewed the housing authority’s pursuit of the land: The price potentially dropped and the agency engaged the city as a collaborator.

Williams said that the price tag a year ago would have been close to $8 million, including civil fines and other costs attached to the property in connection to city abatement efforts. Now the authority is prepared to pay half that price, in part due to the possibility that the city might waive nearly $2 million in fines, described as soft costs.

During the Oct. 15 board meeting, the agency board approved a memorandum of understanding with the city. It gives both sides 90 days to agree on a site development plan and to work out terms and conditions for the city to forgive the fines.

The City Council is expected to consider the memorandum on Wednesday. It is not a party in the purchase and sale agreement, however, which would involve only the housing authority and the property’s court-appointed guardian.

The novelty of a public agency spearheading a casino revival is not lost on Williams, who said he envisions leasing out the three to four acres of property that maintains an active gaming license to an experienced operator.

“I know that there are many hurdles for us to manage a gaming entity and so we will be looking for a partner to do that,” he told the board.

“It hasn’t happened before,” he said by phone this week. “This would be the first in the nation.”

If the housing authority is successful in acquiring the site, the land will actually be owned by its nonprofit arm, Affordable Housing Program Inc., which was created about a decade ago for the authority to develop affordable housing properties.

But Williams said even using nearly $4 million in reserves for a real estate deal tied to a casino project would not at all affect the authority’s ability to continue to develop affordable housing.

The only risk to the authority, he added, is a $39,000 earnest money deposit, which is refundable.

At the board meeting in October, city Redevelopment Manager Tera Anderson said the authority’s project proposal aligns with the city-funded HUNDRED Plan In Action, which lays out a vision for investments in economic development and affordable housing in the city’s Historic Westside.

Councilman Cedric Crear, who represents the area, declined to comment.

Williams said he believed the project will catalyze the revitalization of a part of Las Vegas that is predominantly African-American, where residents have been historically marginalized and faced discrimination.

A town hall meeting on the proposed project is scheduled for 1 p.m. Nov. 14 — five days after the expected court hearing on the site’s future — in housing authority commission chambers, 340 N. 11th St. in Las Vegas. Seating is limited due to the pandemic, and the session will be carried live via Webex at SNVRHATownHall.info.

To RSVP or for more information about how to watch online, call Empowerment Through Training and Education at 702-723-2955 or email Info@EmpowermentNow.com.