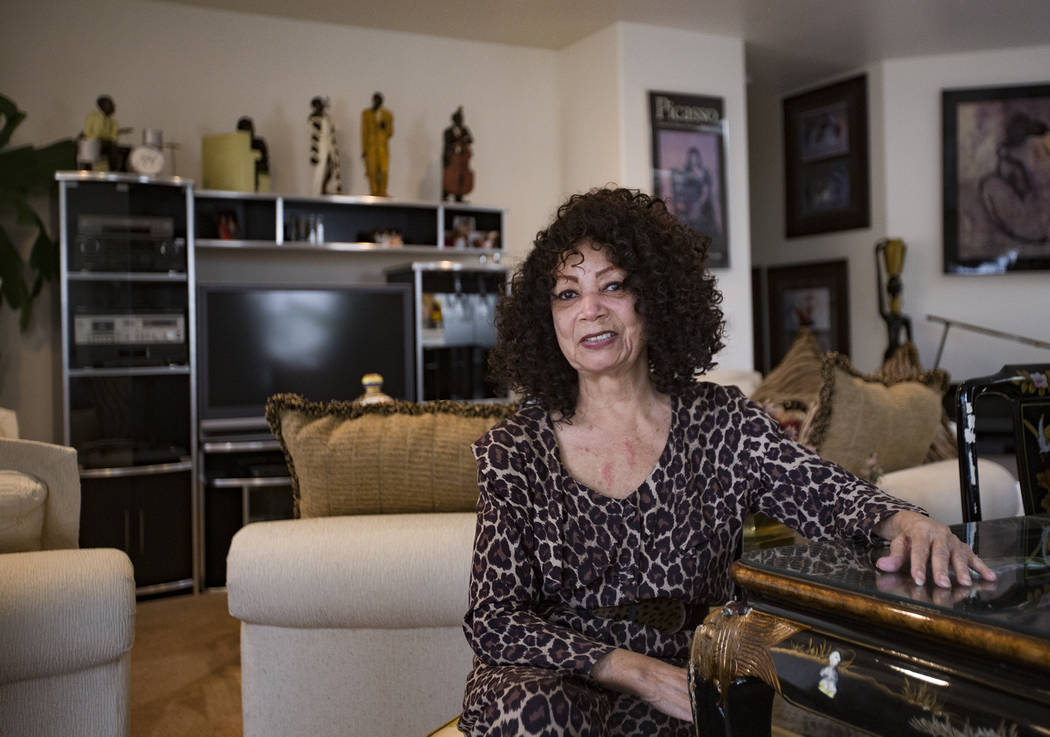 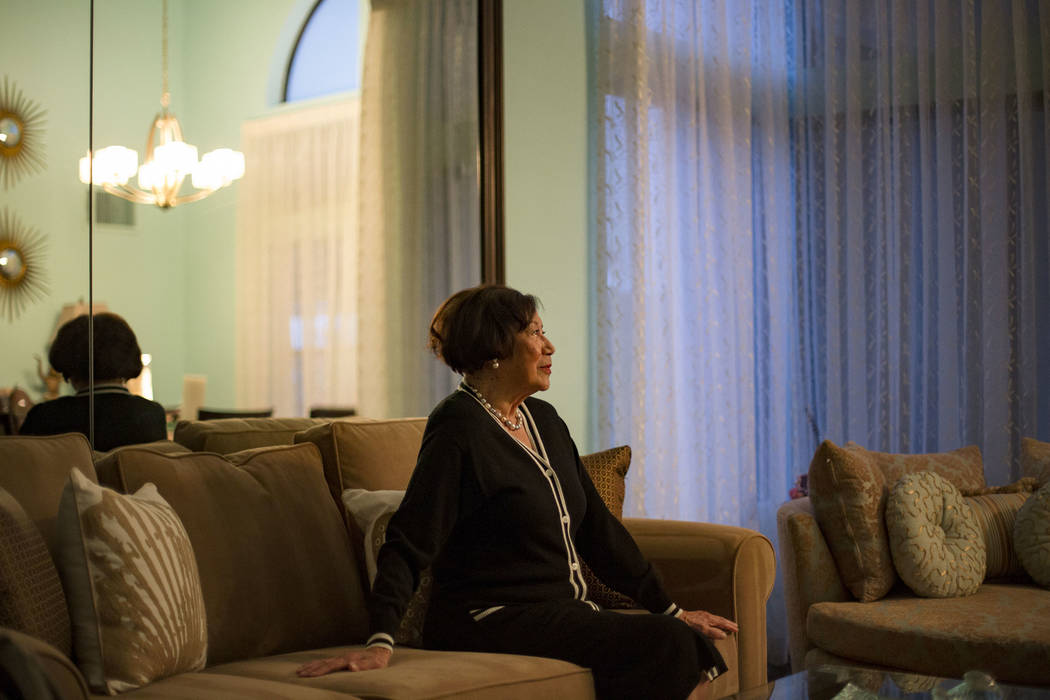 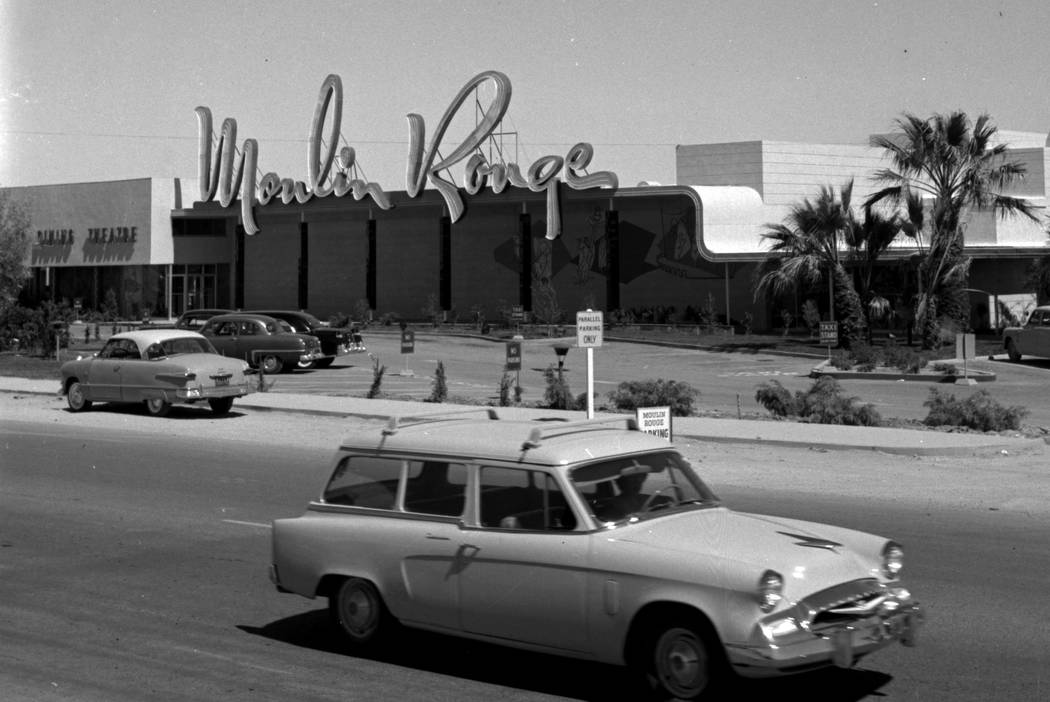 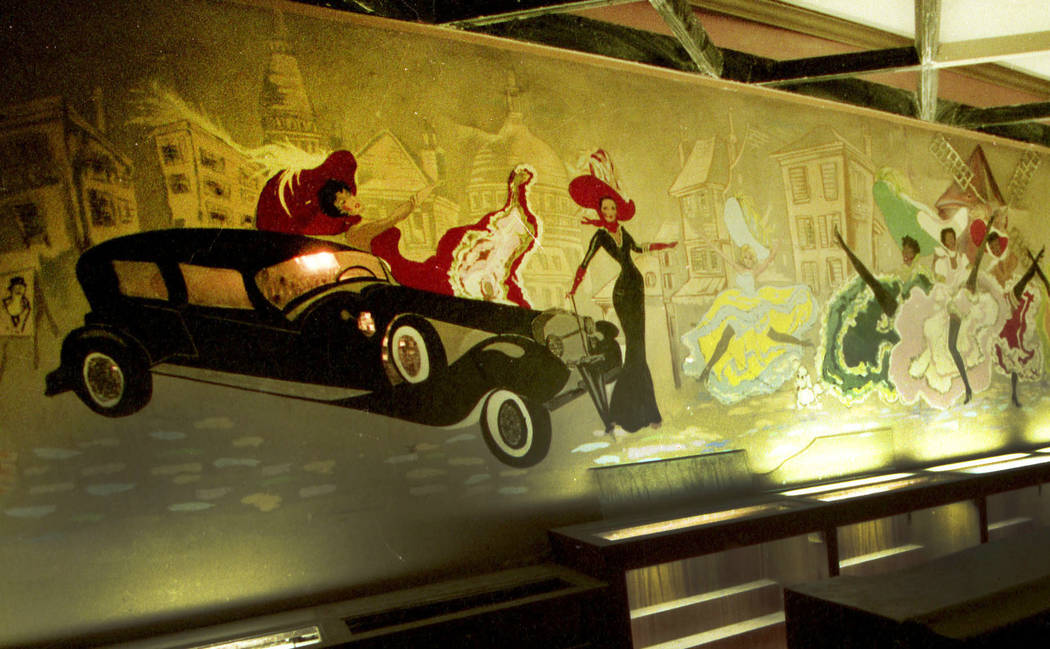 This 1999 file photo shows a mural of dancing showgirls, cars, buildings and drinks in the Club Rouge that was painted in 1955 when the Moulin Rouge opened. (Las Vegas Review-Journal, File) 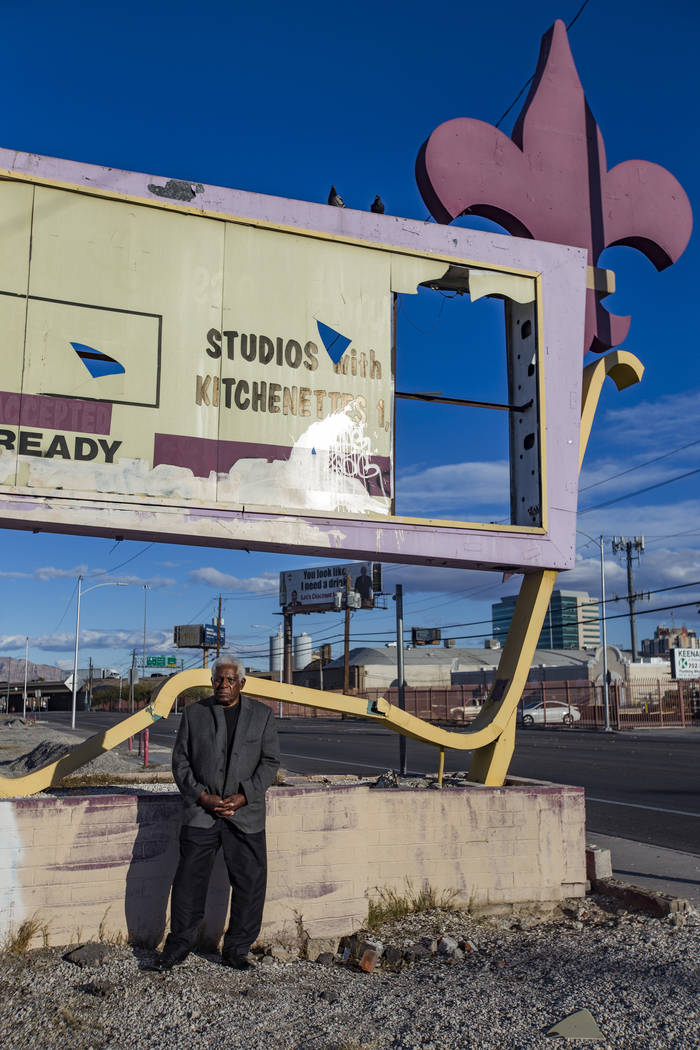 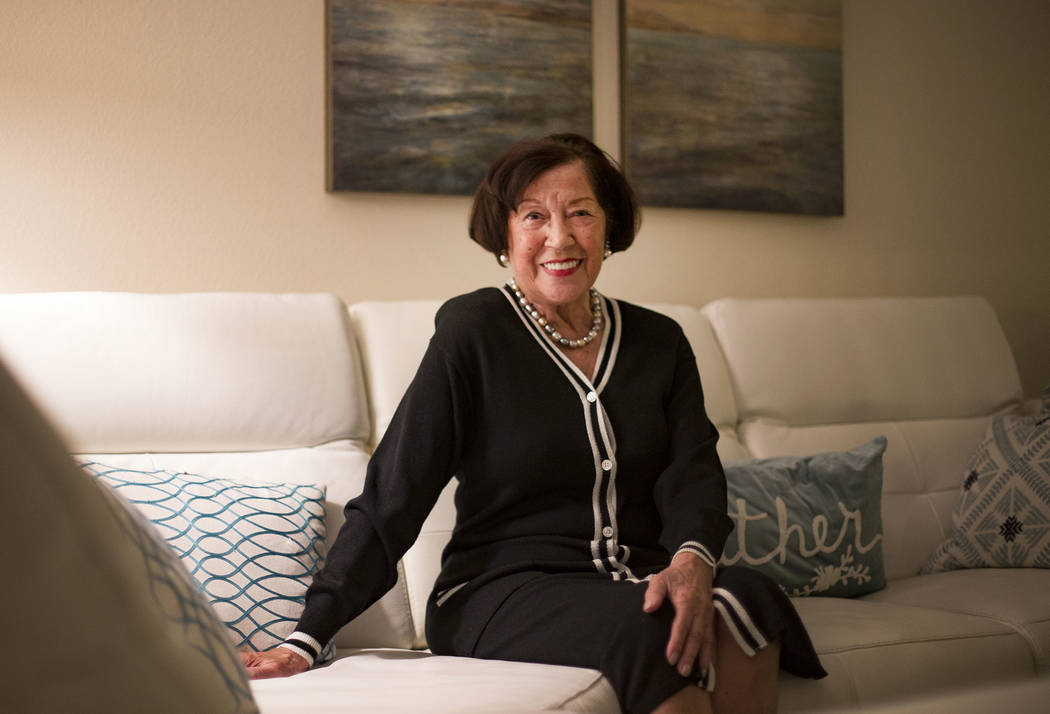 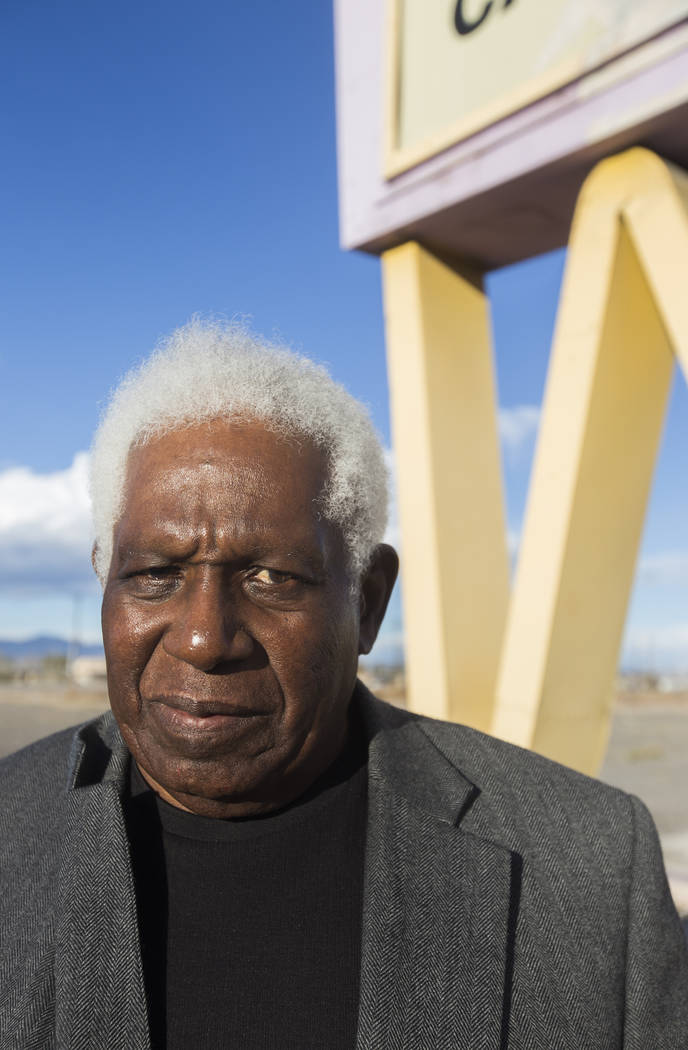 One traveled by limousine with co-star Harry Belafonte. Another flew in with other dancers. A third arrived a year earlier upon enrolling in card-dealing school.

They came from Los Angeles, New York and Detroit. For six months in 1955, their lives converged inside a new luxurious Las Vegas venture outside the confines of the Strip, where they would work in the city’s first interracial casino — the Moulin Rouge.

Each would be confronted with the dichotomy of the short-lived desegregated glitz and glamour and the bitterness of prejudice outside the walls of the West Bonanza Road resort that struck beyond what they were accustomed to in the cities from which they came.

“We just stayed around where people wanted us, where they enjoyed us, and we were like celebrities,” Anna Bailey, a chorus-line dancer, said about navigating the city’s contentious racial climate.

However, the Moulin Rouge, constructed on the west side’s boundary, was the crown jewel of the area — standing out with its premium guest service, full-scale entertainment and up-tempo and exceptionally choreographed dance performances.

It opened on May 24, 1955, to remarkable political and media attention. A Las Vegas Review-Journal article published the next day wrote the hotel-casino “has all of the plush appointments of the swank establishments which preceded it, and serves some of the finest food in the city.”

But facing financial pressure from creditors despite becoming a favorite of entertainment’s elite and drawing regularly packed houses, the Moulin Rouge padlocked its doors in October 1955, just six months after it had been christened to pomp and pageantry.

Now in their late 80s or early 90s, the three former employees of the historic casino, who still live in the Las Vegas Valley, spoke this month to the Review-Journal of their time at the resort and the severe race-related limitations they faced in a city that Bush noted then carried the moniker “The Mississippi of the West.”

Dee Dee Jasmin was born into the business by virtue of her policeman father whose beat traversed Central Avenue in Los Angeles, the famed neighborhood flanked by a string of high-profile nightclubs: “It was in my blood,” she said.

More interested in ballet and interpretative dance than tap, she took lessons early on and appeared on stage for the first time in junior high school. Her first major performance occurred in the Grauman’s Chinese Theater, and her career blossomed from there, building a reputation after stints in the Broadway play “Sugar Hill” and a role in the Belafonte film “Carmen Jones.”

After Moulin Rouge show producer Clarence Robinson and world-class boxer Joe Louis spotted her dancing in an L.A. club, The Oasis, she was pegged to perform at the Moulin Rouge and took her first-ever trip to Las Vegas in style with Belafonte.

“I didn’t know anything until I got here. All I knew was it was a chance for me to be in a big production,” she said.

Growing up in L.A., Jasmin — whose father was black and mother was white — attended integrated schools. She said she was aware that racism had strongholds in her city but that she simply avoided those areas. It wasn’t until she arrived in Las Vegas that she lost her sense of liberation, Jasmin said.

“I was mesmerized because born and being in California, I wasn’t used to black people being segregated from other people,” she said.

The racial intermingling in the Moulin Rouge that brought locals and tourists in droves did not parlay into a refuge from the restrictive nature of the broader city, where blacks were unwelcome on the Strip, could visit few stores downtown and were designated the worst seats inside movie theaters.

Both Jasmin and Bailey said they felt they were somewhat protected by their occupation and by running in the circles of diverse and liberal-leaning fellow entertainers.

Still, even the Moulin Rouge had intense limitations: Women were not allowed in the resort’s hotel. Jasmin’s contract called for her to have perpetually dyed blond hair.

“All we were there for was to dance on that stage and fraternize with the people in the lounge,” Jasmin said. “Because we were supposed to be attractive girls and dancers, we would attract the people, and we did.”

To be clear, Jasmin underscored they were professionally trained performers, not showgirls, although she said she means no disrespect. With a handful of numbers and ultimately three shows per night, the high-intensity “Can Can girls,” featured that summer on the cover of Life magazine, were the talk of the town.

“We were flying across the stage,” Bailey recalled.

Ahead of its time

Bailey hailed from Brooklyn, New York, where the racial climate was better, carrying herself with “a little pizazz or something.” She married the late Bob Bailey, who served as master of ceremonies at the Moulin Rouge and would later host his own TV show.

One night, the two tried to enter the Sands when a security guard blocked them at the door. A familiar face stepped in.

“That’s why I always admired Frank Sinatra because he came and got us,” she said, “and took us to the table where Sammy (Davis Jr.) was sitting — this was between shows — and Sammy was beating on the table. He was just so embarrassed for us.”

Black performers such as Davis Jr. weren’t allowed to enter casino and hotel dining areas in the city, but those harsh restrictions were lifted at the Moulin Rouge. Sinatra was just one of a slew of celebrity visitors to the resort. Others included actors Edward G. Robinson and musician Louie Armstrong.

Dealing craps at the Moulin Rouge was Bush’s first job after he left Detroit and attended a Las Vegas dealer school in 1954.

“The Moulin Rouge was a set-aside for blacks, just to tell you the truth, and the blacks were happy with it,” he said.

But the forward-thinking hotel-casino soon fell on hard times, threatened by city commissioners with revocation of its gambling license and possible foreclosure for failing to provide financial information to the city’s police department.

None of the three former employees accepted that its money troubles could be the result of slow business. After all, as Bailey remembered, “it was standing room every night.”

Instead, Bush said that Moulin Rouge’s precedent-setting integration did not sit well with others and that its owners deliberately did not pay creditors after catching flak from businesses on the Strip whose customers were being siphoned away to the casino. Bailey had only heard bills weren’t being paid, and Jasmin recalled the casino’s three owners, with briefcases in hand, removed money nightly from the cashier area.

After the Moulin Rouge closure, Bush later opened a dealer school to help blacks get jobs in the gaming industry. Bush noted that he was dismayed they were being rejected — many after serving in the Vietnam War — while refugees whom he said had refused to declare U.S. citizenship for fear of being drafted into war were being hired as dealers.

Five years after the Moulin Rouge closure, the resort hosted a meeting that desegregated the Strip and downtown. But decades later, calls by community groups to resurrect the historically recognized site — its remains were demolished in 2017 after a fire destroyed much of it — have been so far fruitless.

Neither Bailey nor Jasmin hold out much hope for a Moulin Rouge revitalization, however, with Jasmin saying she did not believe investors had an appetite for “another black show.”

After the Moulin Rouge shut down, Bailey said she had sought to return to New York. But her husband believed that Las Vegas was the only place for entertainers like them.

“That was our dream,” she said, “and we never did leave.”