A 38-year-old Las Vegas man was arrested last week on identity theft and counterfeit charges, including possession of nearly a dozen unemployment benefit cards that were not issued in his name, law enforcement officials announced Monday.

According to a release from Nevada’s U.S. attorney’s office, Vincent Okoye was arrested on Friday after he was found with more than 100 credit and debit cards that were not issued in his name.

Of those, 11 had come from the Nevada Department of Employment, Training and Rehabilitation, or DETR, which oversees and administers the state’s unemployment benefits program. Okoye also had 12 debit cards issued by Arizona’s unemployment department.

The complaint against Okoye also notes that law enforcement found 24 pieces of mail from DETR, with the names and addresses of other people, as well as a forged Canadian passport and postal mailbox master keys, and more than $100,000 in cash and money orders.

Trutanich said that the case against Okoye is likely “just the proverbial ‘tip of the iceberg.’”

Trutanich said in a follow up interview Monday that the state’s unemployment system that is already at or beyond its capacity “is being further overwhelmed by fraudsters.”

“These resources are intended for people on hard times, and they’re going to scammers,” Trutanich said.

Nevada saw the highest unemployment rate in the nation after the coronavirus forced an economic shutdown across most of the U.S. in the spring, including a nation-high unemployment rate of nearly 30 percent in April. That rate has since fallen to 15 percent in June after most businesses were allowed to reopen.

States across the country have been hit with massive amounts of possible fraudulent employment insurance claims, with states like Washington having lost $650 million and Maryland losing $500 million to such claims.

Kimberly Gaa, the administrator of the Nevada Employment Security Division, said Sunday that the department expects to be audited by the federal government, and that the audit will find fraudulent payments.

Asked by Nevada lawmakers about the scope of the unemployment fraud in Nevada, Gaa said “we don’t know the total number.” 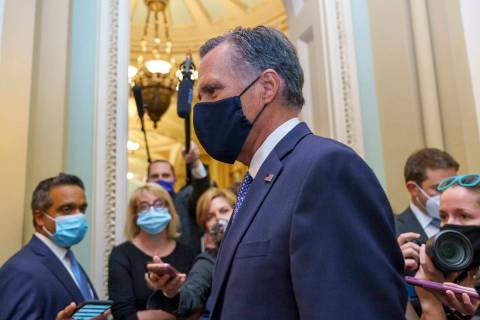