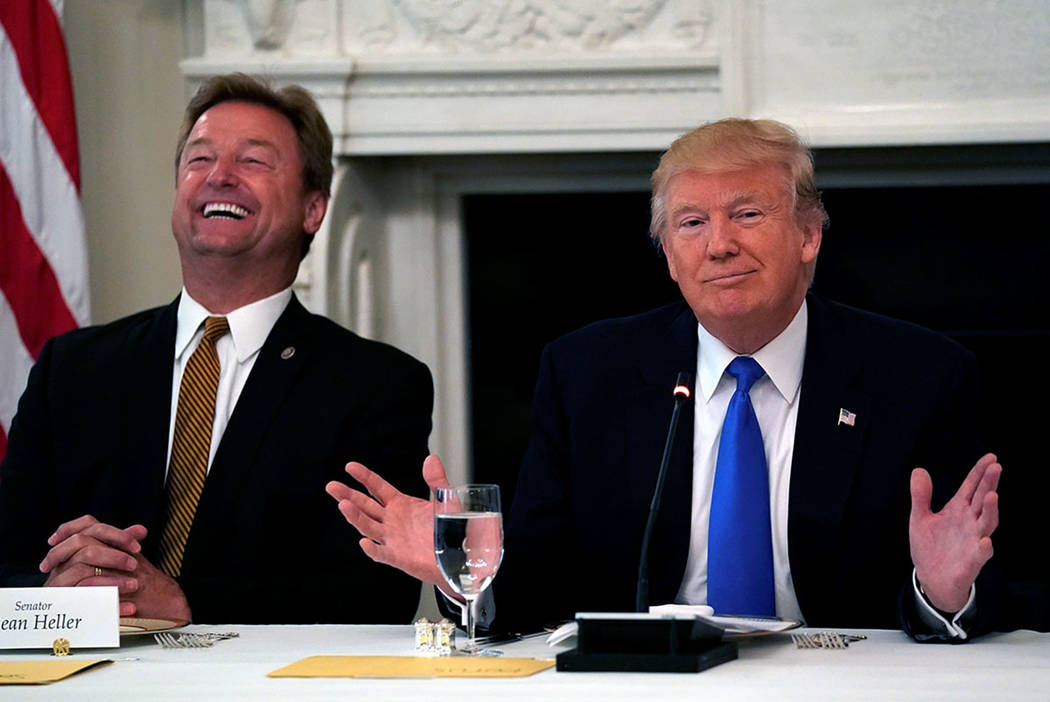 Senator Dean Heller, R-Nev., reacts as President Donald Trump speaks during a lunch meeting with Senate Republicans to discuss healthcare at the White House in Washington in July. (REUTERS/Kevin Lamarque)

WASHINGTON — Sen. Dean Heller, R-Nev., readily admits he “wasn’t one of the biggest supporters” of President Donald Trump during the 2016 election. “I didn’t know him. He didn’t know me.”

But now that the two know each other better, Heller told the Review-Journal, they have a “much closer relationship.”

Now Heller, who revealed in August that he voted for Trump, is running for re-election in a year when the president’s former chief strategist, Steve Bannon, has declared war on GOP incumbents and criticized Heller by name.

Heller is “scared to death of losing that primary,” Nevada Democratic Party Communications Director Stewart Boss said. He pointed to Heller’s opposition to early Republican bills to remake Obamacare but eventual vote in favor of the “skinny” Obamacare repeal that failed.

Boss recalled the July lunch at the White House at which Trump pointed to Heller, whom he had seated next to him, and said, “This is the one we were worried about,” but predicted Heller would vote for a Senate health care bill because “he wants to remain a senator, doesn’t he?”

“So that moment in the sun, back in July, I take as a positive step,” Heller said. “Both of us moving forward to try to get things done.”

When Trump invited GOP lawmakers to the White House to celebrate passage of a tax bill this month, Heller again had a place of honor near Trump. It was a nice spot, Heller later admitted. “I’ll stand wherever the president wants me to stand.”