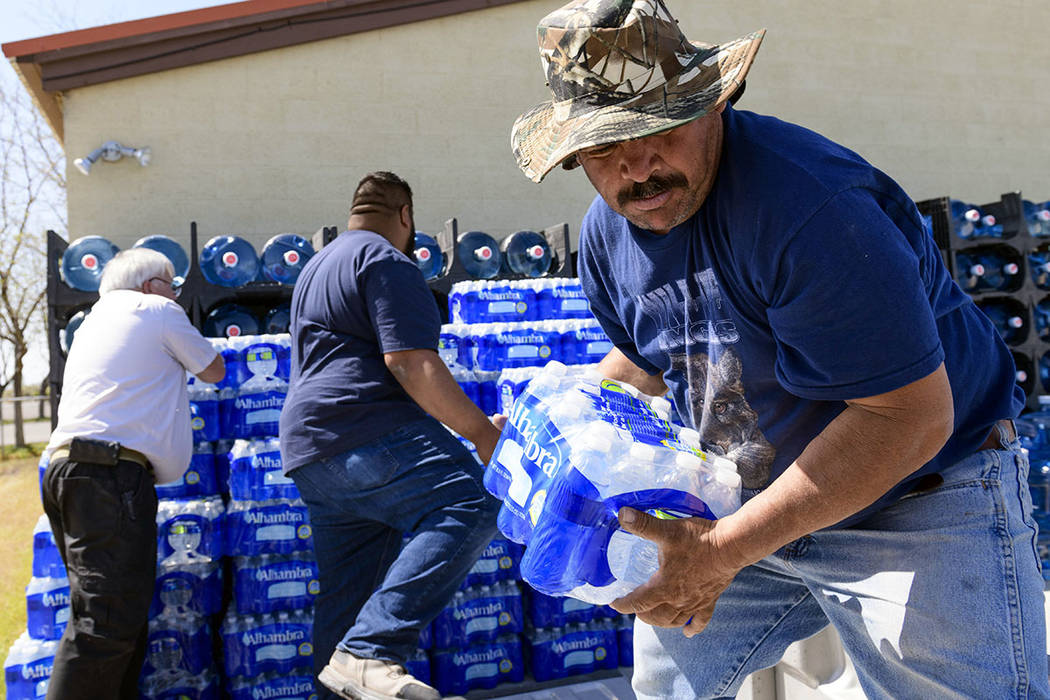 Nicolas Cuevas, right, and others load up plastic water bottles to distribute to members of the Yerington Paiute tribe after their weekly water delivery was left at the tribal border in Yerington on Friday. (AP Photo/Scott Sady) 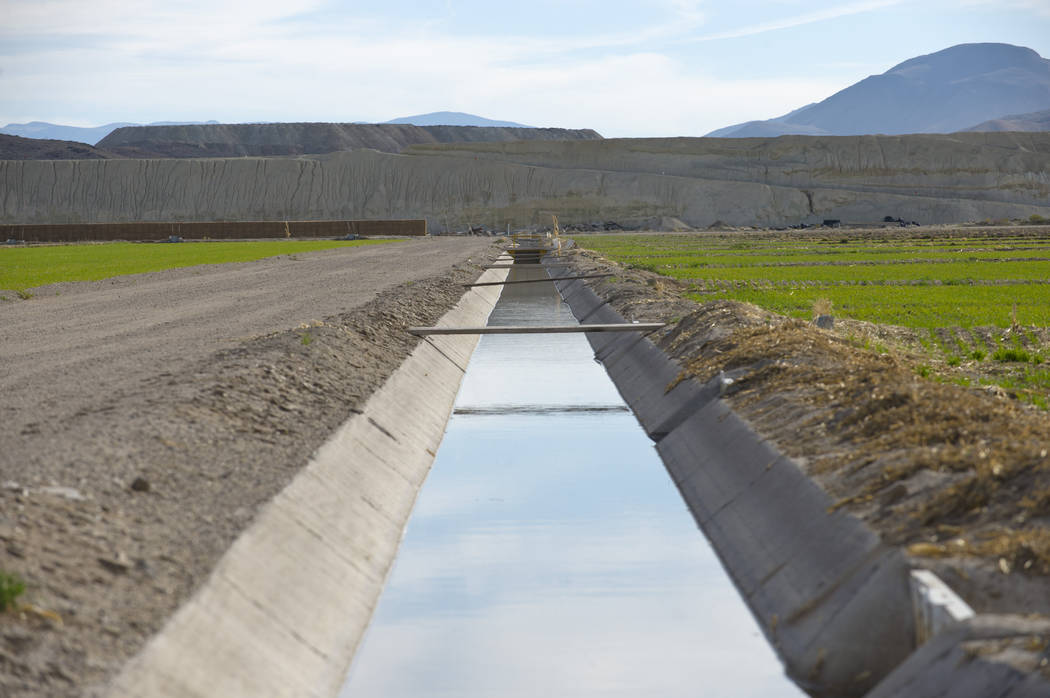 Irrigation ditches and crop fields located above the toxic plume of contaminated groundwater spreading from the former Anaconda copper mine site near Yearington in 2009. (AP Photo/Scott Sady, File) 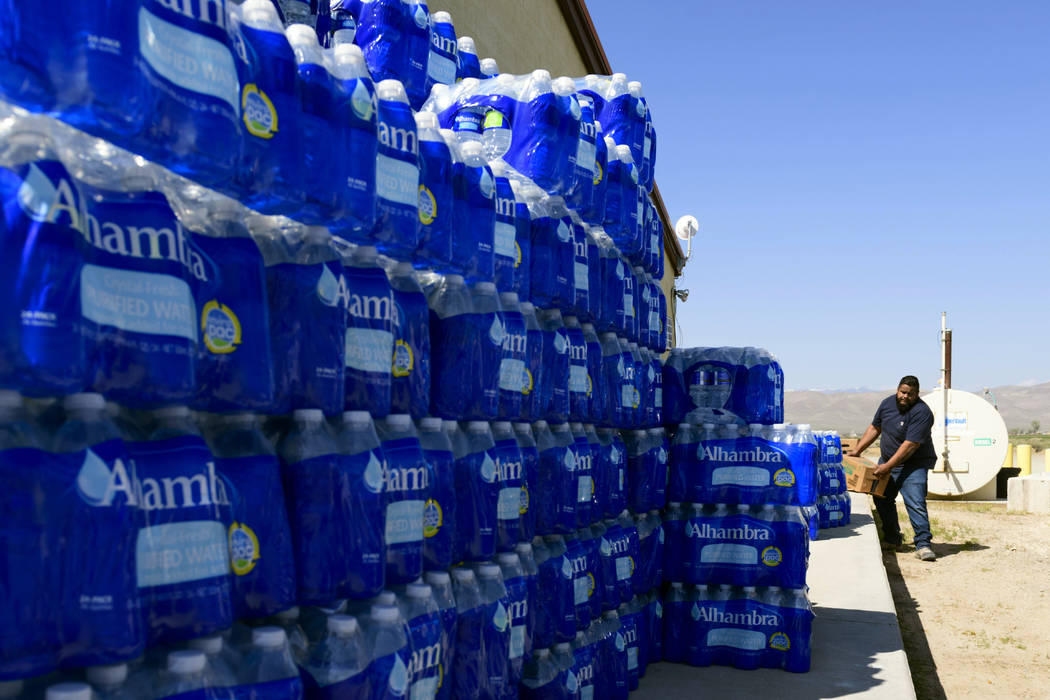 Tommy Gutierrez, a Paiute tribe member, helps load up some of the thousands of plastic water bottles that are distributed weekly to the Yerington Paiute tribe in Yerington on Friday. (AP Photo/Scott Sady) 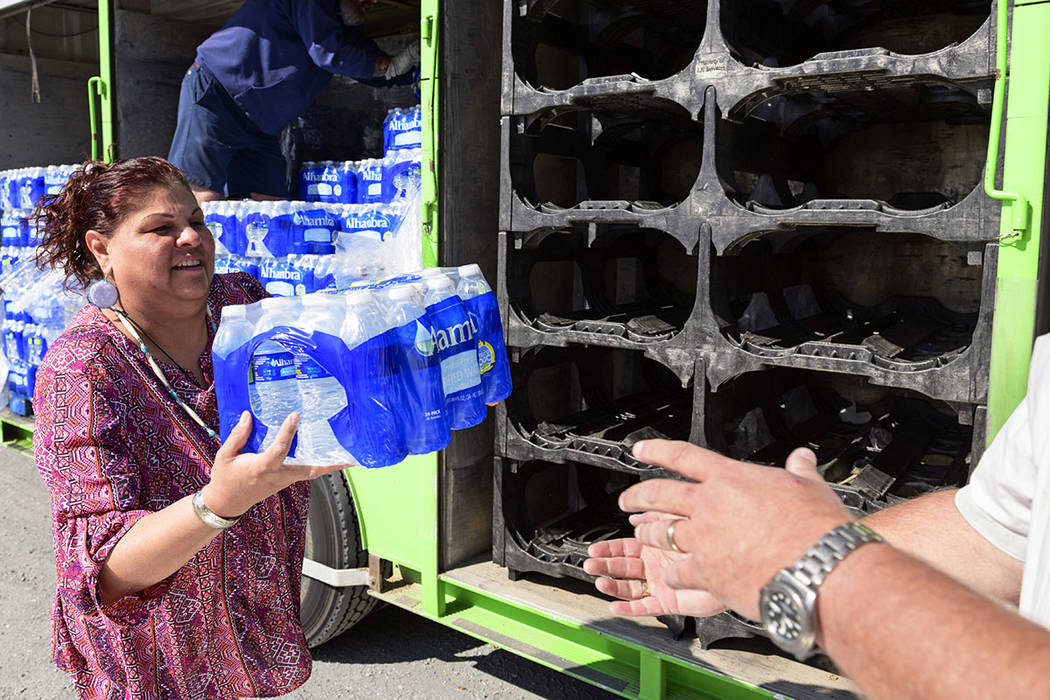 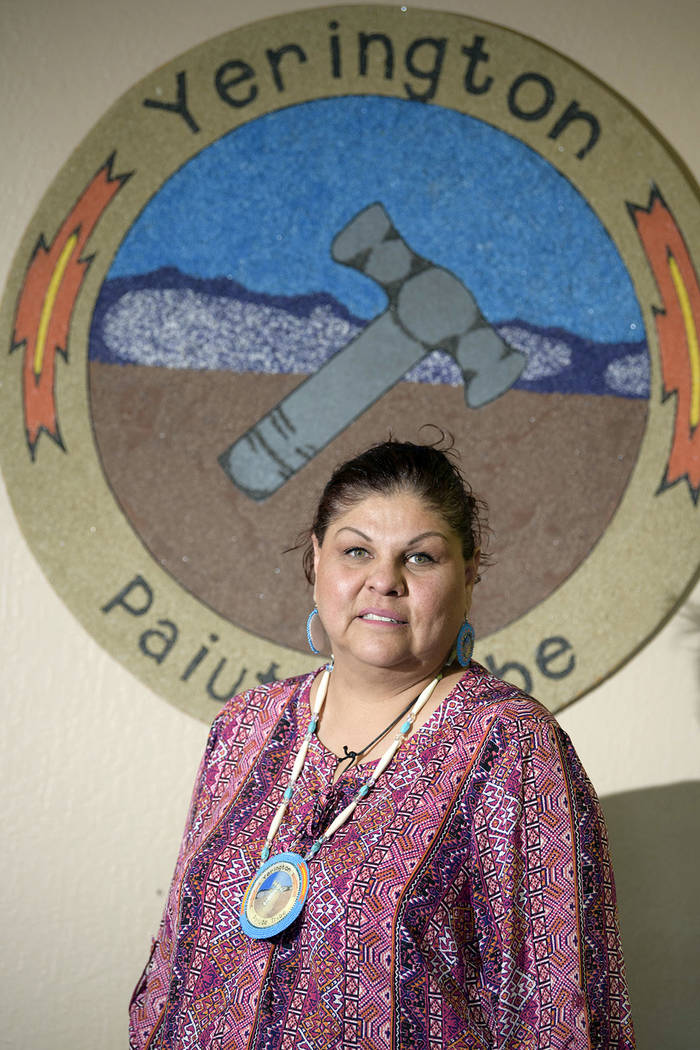 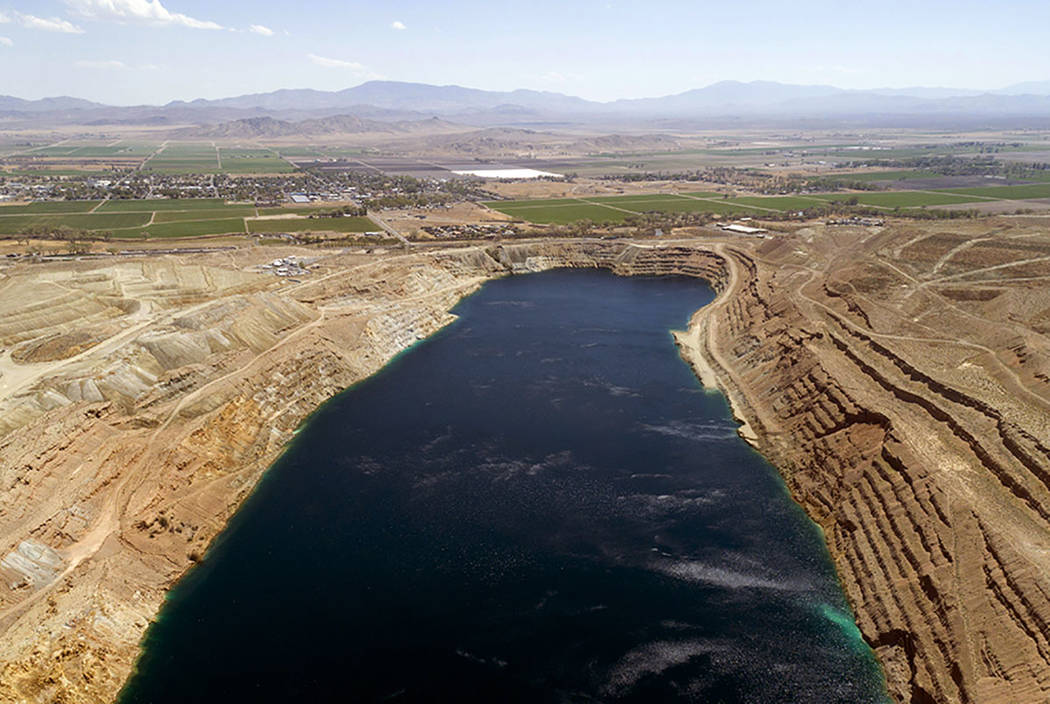 The abandoned Anaconda open pit mine, source of an underground plume of poisonous water, is seen in an aerial photo in Yerington on Friday. (AP Photo/Scott Sady) 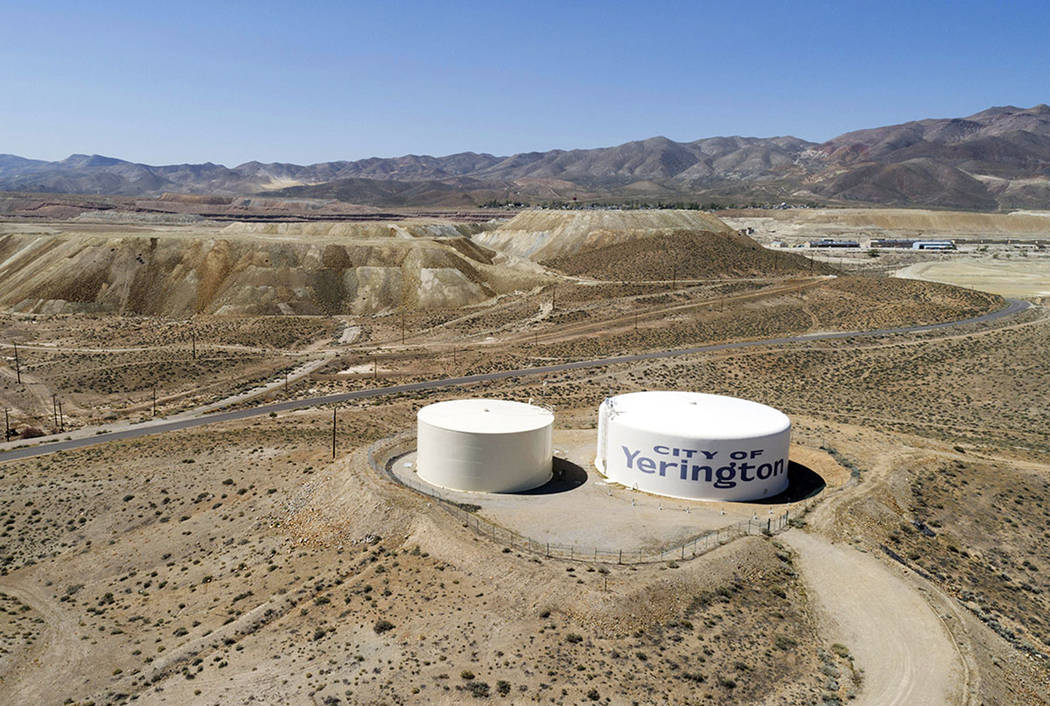 Water tanks for the town of Yerington, with the abandoned Anaconda mine pit, source of an underground plume of poisonous water in the background, are seen Friday. (AP Photo/Scott Sady)

RENO — It was an uncharacteristically urgent demand at a U.S. Superfund site where the cleanup of an abandoned World War II-era mine has dragged on for two decades and progress is measured, at best, in years.

Atlantic Richfield, owner of the former Anaconda copper mine, was suddenly halting the free home delivery of bottled water it’s provided since 2004 to about 100 residences on a neighboring Native American reservation in Nevada where scientists continue to track the movement of a poisonous plume of groundwater.

“It is imperative that these deliveries do not take place,” an Atlantic Richfield contractor wrote this month in a series of emails obtained by The Associated Press.

The Yerington Paiute Tribe alleges the abrupt change was retaliation for its fight against a recent move that puts the state and the company in charge of cleaning up the mine site instead of the U.S. Environmental Protection Agency.

Over the tribe’s staunch objections, the EPA in February backed off plans in the works for years to formally elevate the mine to priority status on a list of the most contaminated Superfund sites.

“I believe that this dismissive, arrogant act means to punish us by cutting off our water in an attempt to pressure us to stop fighting for our legal rights,” Tribal Chairman Laurie Thom told the AP.

Atlantic Richfield currently is delivering water to a site off the reservation for tribal members to pick up, and both sides blame each other for failing to reach an agreement to resume normal deliveries.

Atlantic Richfield spokesman Brett Clanton said the Houston-based company “is disappointed with the characterization of this sequence of events as retaliatory.”

The company began providing the bottled water after tests confirmed poisonous groundwater seeping from the mine had contaminated dozens of neighbors’ wells.

It will resume home deliveries, as well as groundwater sampling on tribal property, once a “valid access agreement can be obtained” from the tribe, Clanton said.

The mine’s previous owner, Arimetco, left behind a 90-million-gallon toxic stew of uranium, arsenic and other chemicals — enough to cover 80 football fields 10 feet deep — when it abandoned the site in 2000, according to the EPA.

Now owned by BP, Atlantic Richfield paid $19.5 million to settle a class-action lawsuit in 2015 brought by about 700 nontribal neighbors of the mine, about 65 miles southeast of Reno. The neighbors had accused past owners of conspiring to cover up the extent of groundwater contamination. The company continues a legal battle with the tribe.

Tribal leaders say the water dispute underscores their concerns that Gov. Brian Sandoval has negotiated away any ability to expedite the cleanup without the teeth of the EPA.

Their fears grew earlier this month when EPA Administrator Scott Pruitt announced he dropped the mine from a list of 21 Superfund “emphasis” sites targeted for “immediate and intense attention.”

The emphasis list Pruitt issued last year — a lesser category of priority sites that didn’t exist under prior administrations — was roundly criticized by environmentalists and others who said it was an attempt to divert attention from the Trump administration’s proposed 30 percent cut in the EPA’s budget.

The EPA said in announcing the Anaconda mine’s removal from the list that “cleanup activities progress, and completion of specific milestone and timelines have benefited from the administration’s influence.”

But Dietrick McGinnis, a longtime environmental consultant for the tribe, said the new timelines the EPA released in conjunction with the February agreement to defer any priority Superfund listing indicate groundwater cleanup will be delayed by more than four years.

“During the last year or so while this has gone on, it brought the whole process to a halt,” he said. “There have been no new wells, no heavy equipment working on site, or even real technical decisions since Trump was elected.”

Twice before, the EPA urged priority listing based on tests that showed toxic levels of uranium, but backed off when state and local business leaders opposed the move for fear of a stigma that could affect property values.

Sandoval announced in 2016 he was reluctantly dropping the state’s opposition because the listing would make $31 million in federal cleanup funds available. But he reversed course in July when Atlantic Richfield offered to provide that money instead, and persuaded the EPA to defer any listing.

The governor continues to support the current cleanup path, his spokeswoman Mary-Sarah Kinner said this week. She said the EPA’s proposal for priority listing remains on the table until the cleanup is completed under state oversight.

The latest clash centers on the tribe’s insistence that neither Atlantic Richfield nor the state has any authority to carry out cleanup efforts on its property.

Tribal members “have jurisdiction over their own land, air and water resources, and only the EPA has been directed by the U.S. Congress to implement federal environmental statutes on tribal lands,” the National Congress of American Indians said in a resolution attached to one of Thom’s complaints to the EPA on March 7.

On Friday, several volunteers helped a delivery driver for Alhambra Waters unload several tons of water at a market off the reservation about 2 miles north of the mine — most of it in 5-gallon jugs but also in 24-packs of thousands of plastic bottles. The volunteers then loaded the supplies into a tribe-owned trailer and hand-delivered the water door-to-door to homes spread across a few square miles.

Greg Lavoto, head of the Nevada Division of Environmental Protection, said his agency respects tribal sovereignty and looks forward to a resolution of the access issue “so that bottled water delivery to homes and groundwater monitoring can continue uninterrupted.”