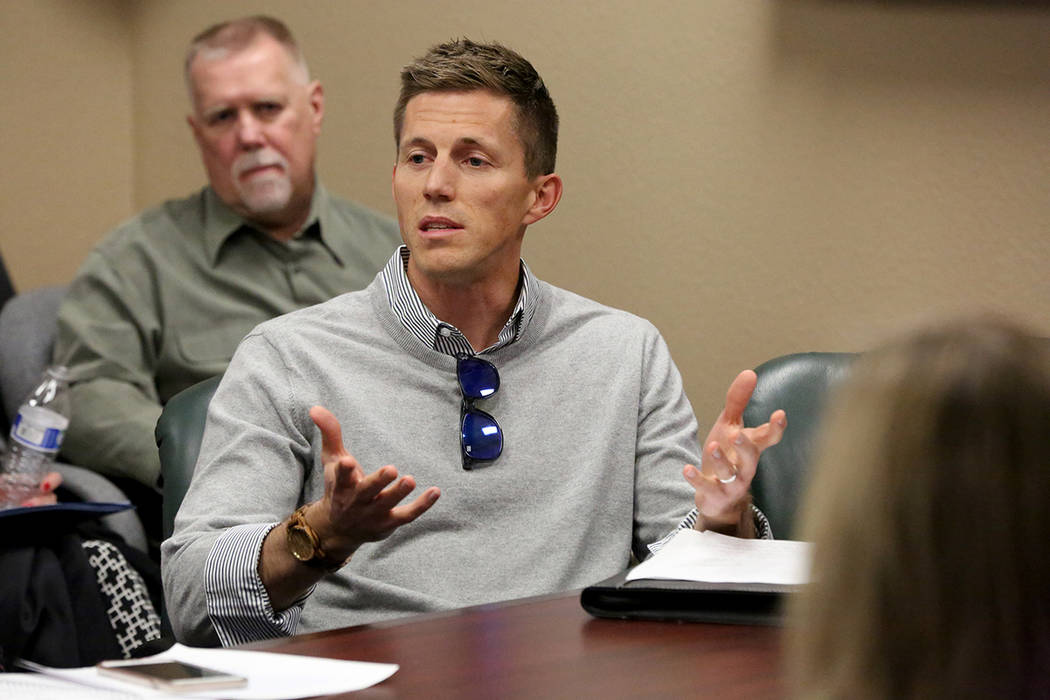 Cole Sondrup, M.D, expresses concerns to the Nevada State Board of Medical Examiners and a packed conference room of medical professionals about proposed regulations for Nevada Assembly Bill No. 474 which outlines requirements for prescribing opioids. (Michael Quine/Las Vegas Review-Journal) @Vegas88s 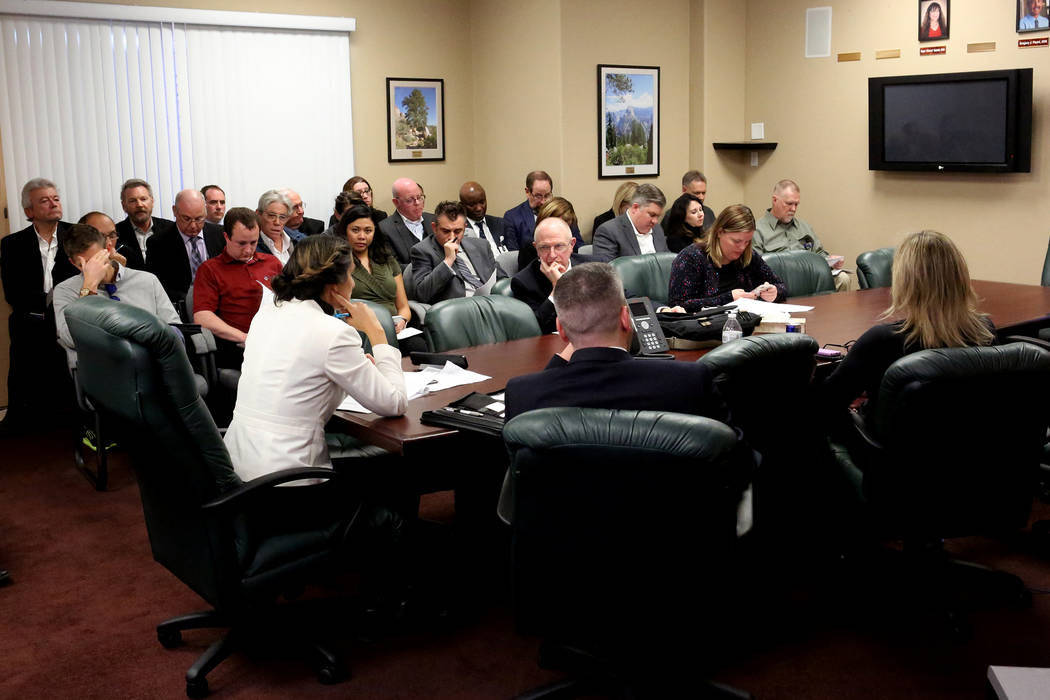 Medical professionals pack a small conference room at the offices of the Nevada State Board of Dental Examiners in Las Vegas on Wednesday, Jan. 3, 2018, to express concerns about proposed regulations for Nevada Assembly Bill No. 474 which outlines requirements for prescribing opioids. (Michael Quine/Las Vegas Review-Journal) @Vegas88s 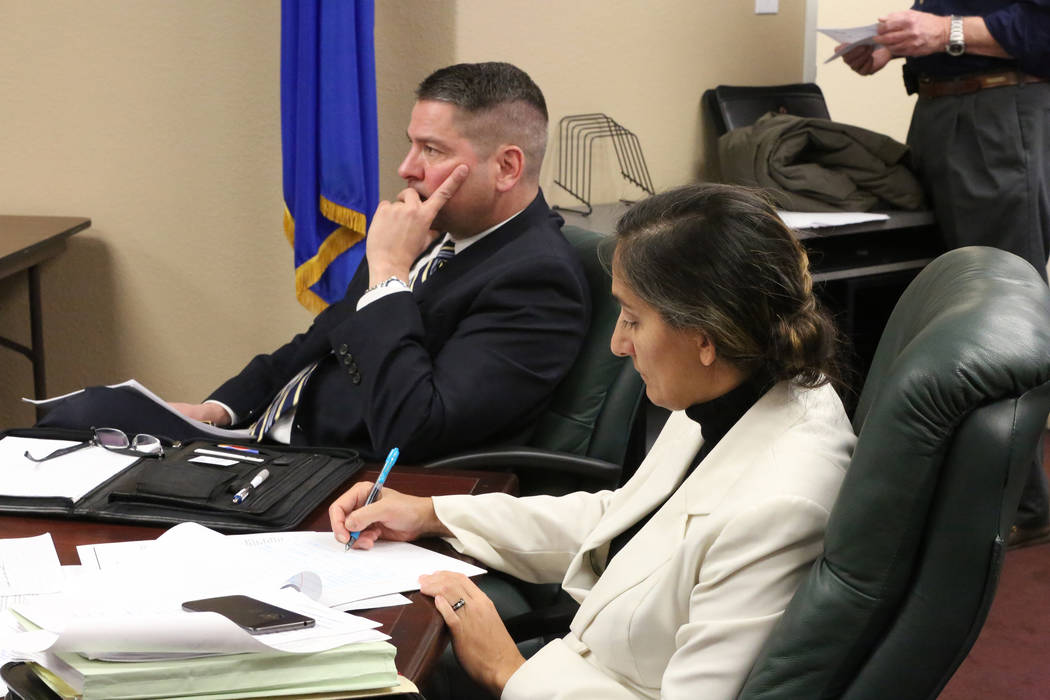 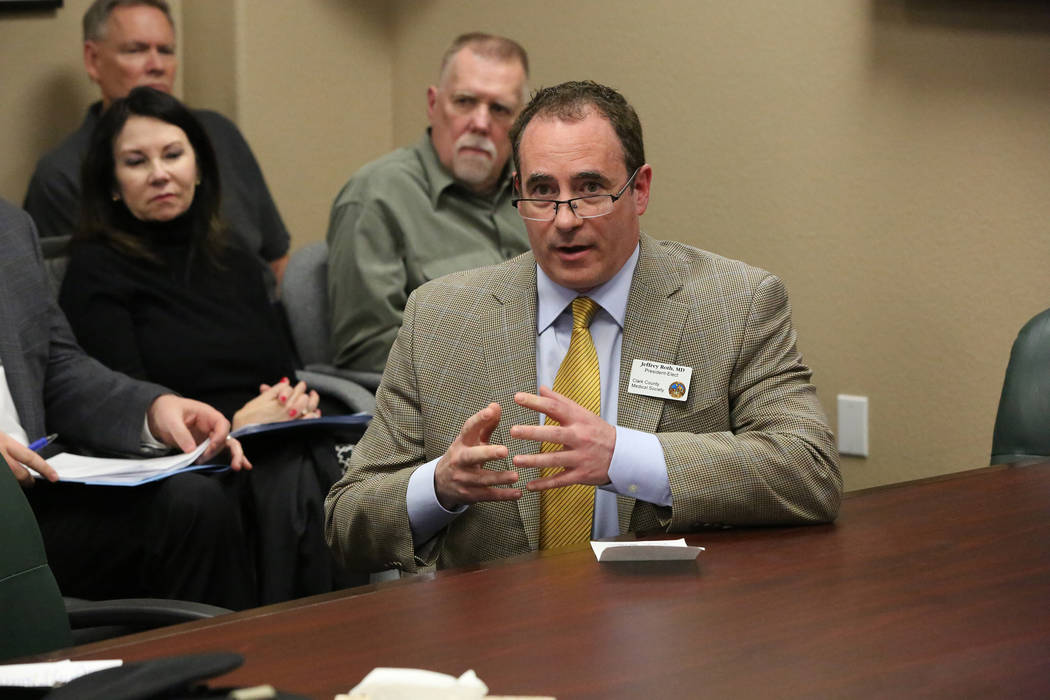 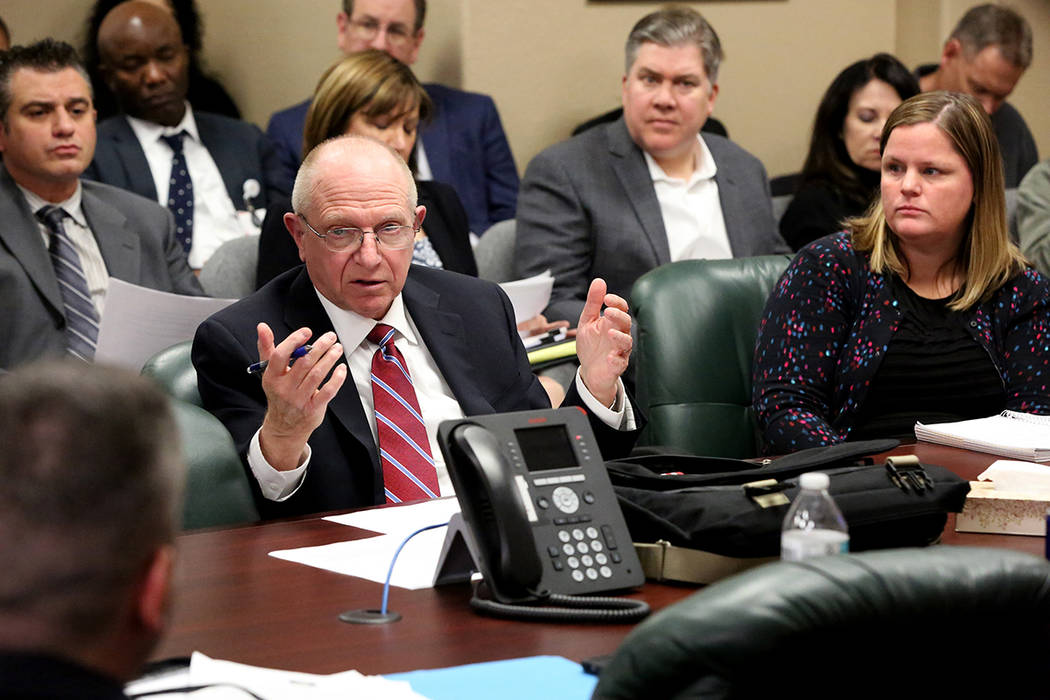 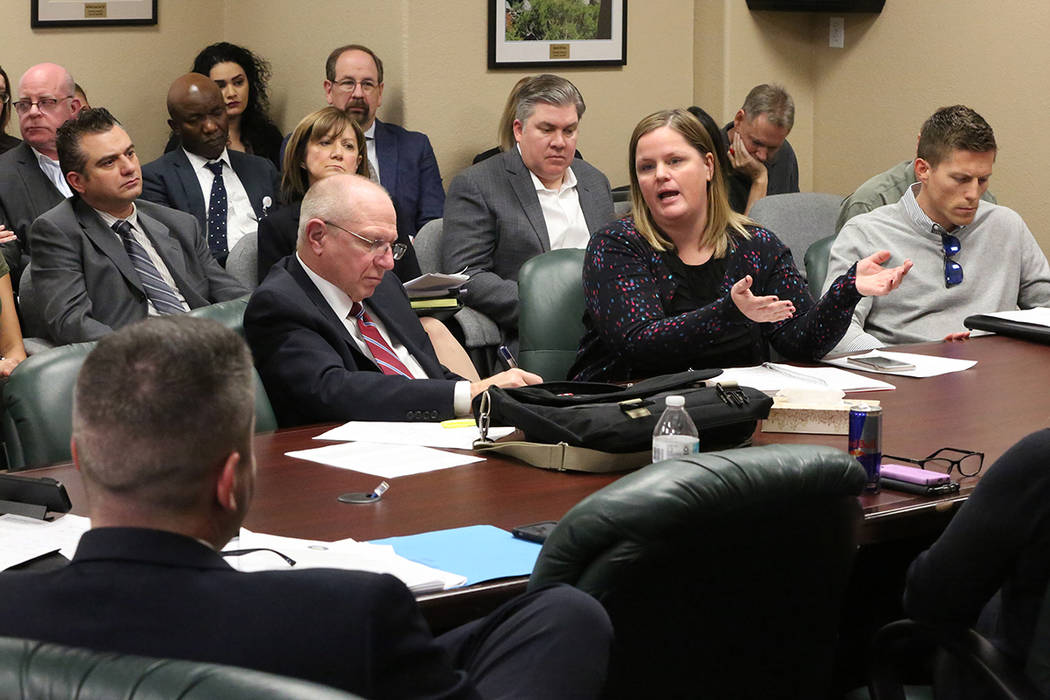 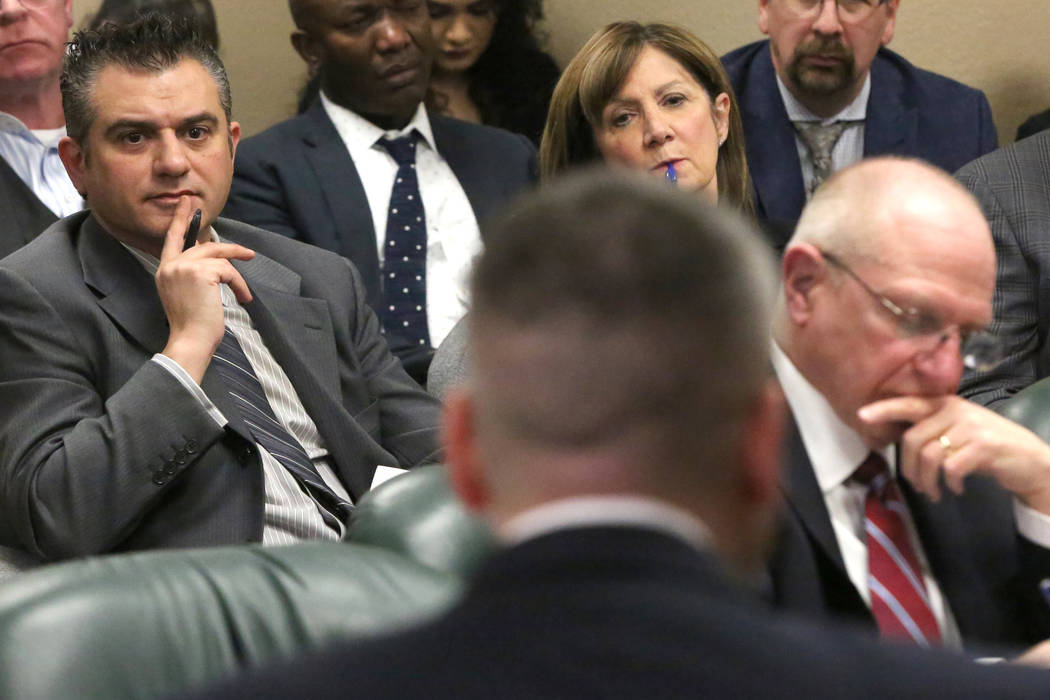 Robert A. Gaimaro, PA-C, left, and attorney Maria Nutile listen to Nevada State Board of Medical Examiners executive director Edward O. Cousineau during a meeting at the Board of Dental Examiners in Las Vegas on Wednesday, Jan. 3, 2018, regarding proposed regulations for Nevada Assembly Bill No. 474 which outlines requirements for prescribing opioids. (Michael Quine/Las Vegas Review-Journal) @Vegas88s

It’s been only three days since Nevada’s new opioid prescription law took effect, and doctors already are venting about its impact on their practices.

About 40 physicians, lawyers and others attended a meeting of the state medical and dental boards Wednesday in Las Vegas to express concerns over draft disciplinary rules for doctors who issue illegal, fraudulent, unauthorized or “otherwise inappropriate” prescriptions for pain medications under the law.

Several doctors said the law makes unreasonable paperwork demands, while the proposed regulations don’t specify the types of conduct that could lead to penalties or even the loss of their medical licenses.

Under proposed rules, doctors who violate the new Controlled Substance Abuse Prevention Act five times would lose their licenses. The threshold would be lowered in coming years, with three violations resulting in a loss of license by 2020.

But doctors who attended the meeting complained that the proposed regulations don’t specify what constitutes a violation and expressed concerns that they could be penalized for relatively minor infractions, such as forgetting to pull up a patient’s prescription history, or that an employee could make a mistake.

Doctors also are worried that the threat of discipline will funnel patients from specialists to primary care physicians to pain management clinics, which say they already are inundated.

Dan Laird, a pain management specialist at Flamingo Pain Specialists and a Las Vegas attorney, said in an interview with the Review-Journal that he has a stack of referrals from primary care doctors received over the past two days sitting on his fax machine.

“It will provide further disincentives to take care of chronic-care patients,” Laird said.

Others told the board that they already have lost the trust of longtime patients over new paperwork requirements and the threat of random drug testing at their doctor’s discretion.

“Just the other day, I had a patient tell me point-blank they’re not going to sign the forms, they don’t want to do initial testing, and they would just go to the street to get their narcotics,” said Andrew Pasternak, founder of Silver Sage Center for Family Medicine in Reno and president of the Washoe County Medical Society.

Others complained about the paperwork burden. Sondrup said he took an extra 10 minutes per patient filling out forms this week.

“It is not a quick interview,” he said.

Daniel Burkhead, who runs the Innovative Pain Care Center, has been a supporter of the law, working with the medical board to help answer doctors’ questions ahead of its rollout.

But he acknowledged Wednesday that he too is concerned about its implementation.

“I have some lack of understanding of the law as well, because the law has some internal inconsistencies and ambiguities,” Burkhead said, adding that he’s paid for legal advice to help interpret the law.

“I’m not here to complain about the content of the law, because the law is what it is. … But my practitioners are fearful, and the reason they’re fearful is because of the board’s approach to the penalties imposed,” Burkhead said.

Others worried the law and proposed regulations will drive doctors considering moving to Nevada to think twice, a concern in a state that faces a severe doctor shortage.

“What resident, in his right mind, would come to Nevada and potentially lose his license over a clerical error, when you could go to 49 other states where it’s not like that?” Laird said.

Shawn McGivney, a primary care physician who holds a private practice in Las Vegas, took an informal vote from the crowd on the proposed regulations: “We suggest you (the board) vote ‘no’ now. … Everyone in agreement?”

He looked around at the quiet crowd and said, “All ‘no.’ One hundred percent ‘no.’ ”

Ed Cousineau, the state medical board’s executive director, said he will discuss with fellow board members rewriting the rules and calling a second workshop after they are completed. He said the regulations would be finalized in late spring at the earliest.

“There’s always going to be unintended consequences,” he said. “We have to basically, as a medical board, follow our directives. AB 474 is now the law, and the interpretation of that is something that’s obviously a big issue.”