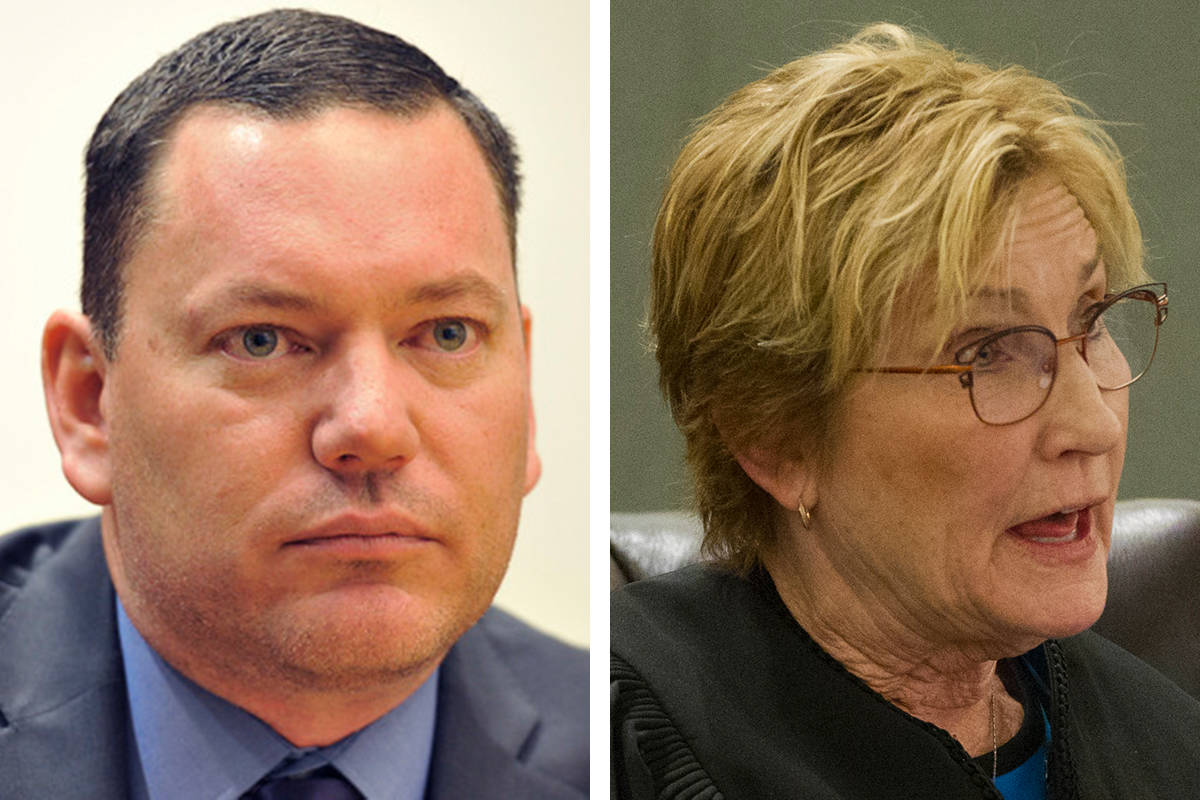 A Clark County district judge and Family Court judge are facing charges from a state disciplinary board in separate ethics cases.

In one case, Family Court Judge William Potter, accused of leaving sexually inappropriate messages with another judge and court staff, faces possible punishment for the second time in three years.

Meanwhile, District Judge Kerry Earley was charged with violating judicial canons after the Nevada Commission on Judicial Discipline alleged that she cursed and yelled at courthouse employees.

Attempts to reach Potter and Earley on Wednesday were unsuccessful.

Potter, who took the bench in 2006, walked into Chief District Judge Linda Bell’s chambers in July 2019 when she was not there and left a patch with a note on her desk, according to allegations filed late last month by the discipline commission.

An image on the patch depicted a man who resembled Potter with “a ball gag in his mouth,” the allegations state.

Emblazoned on the patch were the words “Gag Order, Esquire,” the commission alleges. Next to the patch, Potter left a note that read: “Thinking of you, Billy.”

Potter reportedly also delivered a patch to each of Bell’s female co-workers, including her assistant, court recorder and clerk, and to a law clerk for Family Court Judge Linda Marquis.

“The depiction on the patch is commonly associated with sexual bondage, domination, fetish and fantasy,” the allegations state. “Gags also have connotations of punishment, control, humiliation, and helplessness. The female co-workers found the patch to be sexual in nature and inappropriate in the workplace. Judge Bell found the patch and the attached note to be highly inappropriate and offensive.”

The commission alleges multiple violations of the state’s Code of Judicial Conduct.

It’s at least the second time Potter has faced the panel.

In 2017, he was suspended for two months without pay after he ordered a lawyer handcuffed in court, commented on cases during his re-election bid and lashed out during his own disciplinary hearing.

In another set of charges filed last month, the commission alleges that District Judge Kerry Earley “screamed or yelled at the chief judge” in March 2018 after Earley’s assistant was asked to remove flyers posted in elevators at the Regional Justice Center announcing a retirement party for her husband.

Later that year, the charges state, after the chief judge told Earley she would be assigned strictly to civil cases, she was “very upset and yelling.”

Earley, who took the bench in 1999 and is not seeking re-election, also is accused of addressing her assistant in “a loud, offensive, profane manner in the presence of others,” and raising her voice and swearing several times among courthouse staff between 2015 and 2019.