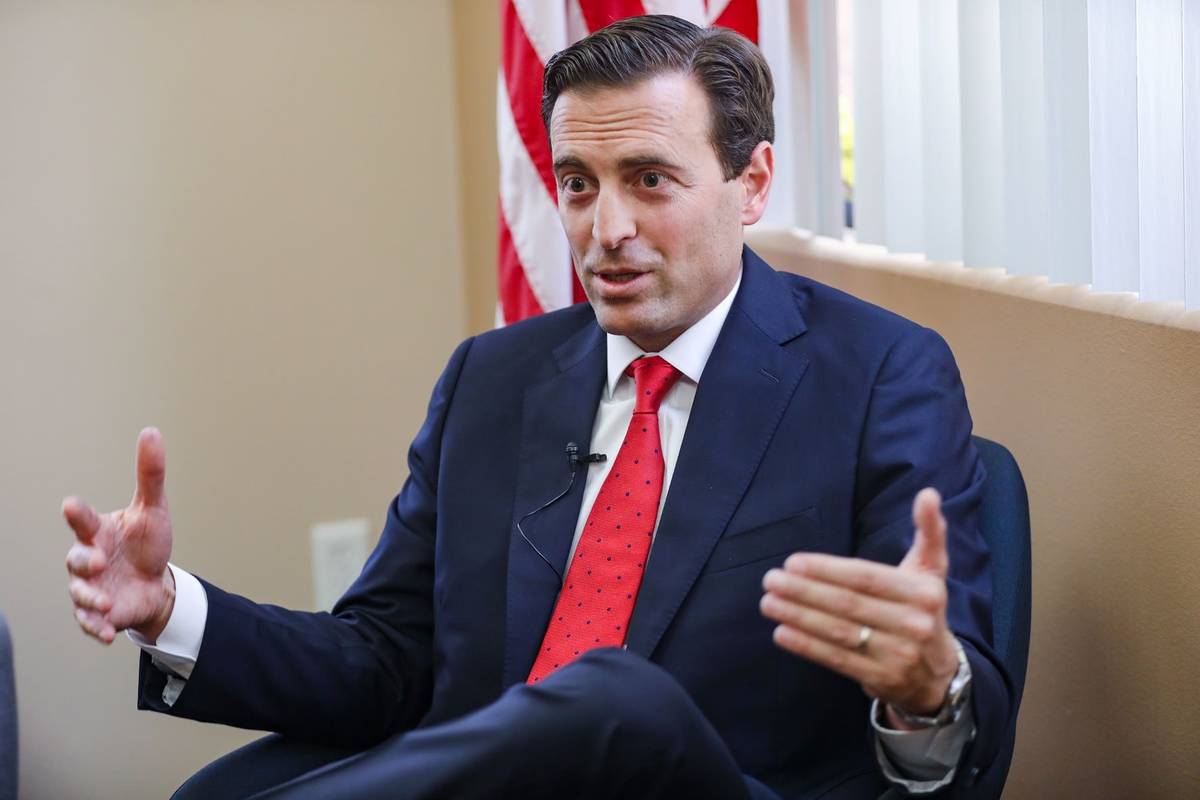 Adam Laxalt, who is running for a seat in the U.S. Senate, speaks to the Review-Journal at an office in Las Vegas, Thursday, Aug. 19, 2021. (Rachel Aston/Las Vegas Review-Journal) @rookie__rae 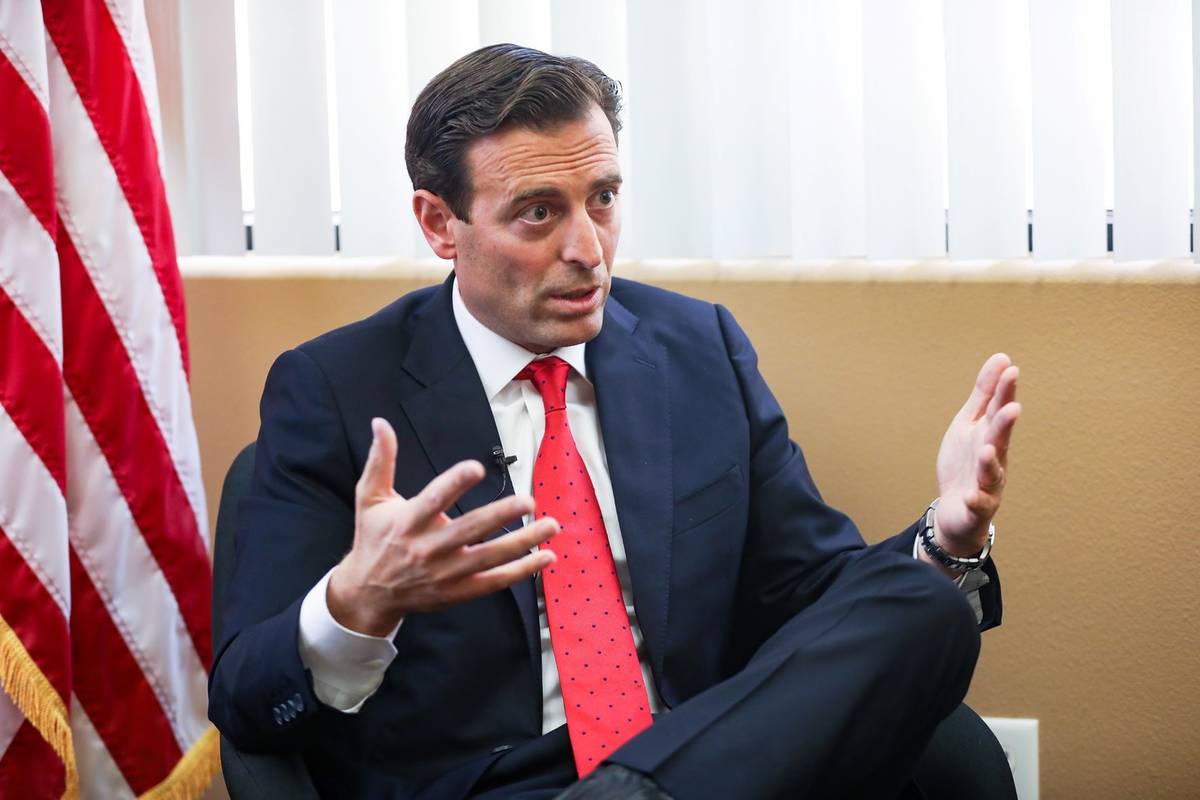 Adam Laxalt, who is running for a seat in the U.S. Senate, speaks to the Review-Journal at an office in Las Vegas, Thursday, Aug. 19, 2021. (Rachel Aston/Las Vegas Review-Journal) @rookie__rae

Former Republican Nevada Attorney General Adam Laxalt, one of the most prominent voices in the failed effort to overturn the state’s 2020 election, said he is running for U.S. Senate because the left has radically changed the country.

In a wide-ranging interview with the Las Vegas Review-Journal days after officially announcing his candidacy, Laxalt said Nevadans are scared and angry to see corporations, big tech and the “leftist woke cancel culture” impose their will on people.

“They feel like there’s no one that will speak for them, and that’s what I plan to do,” the 42-year-old Laxalt said. “I plan to stand up against that. I plan to be a voice for those that don’t have a voice in this system right now.”

Former President Donald Trump on Friday announced his support of Laxalt, saying in a statement that he “fought valiantly against the Election Fraud, which took place in Nevada. He is strong on Secure Borders and defending America against the Radical Left. Adam has my Complete and Total Endorsement!”

Before Laxalt can make a run against Democratic Sen. Catherine Cortez Masto in November 2022, he will have to win the Republican primary. He faces Army veteran Sam Brown, small-business owner Sharelle Mendenhall and health care executive and U.S. Air Force veteran Bill Hockstedler in that contest.

Nevada’s U.S. Senate race is one of the key contests nationally in 2022 because it could shift control of the equally divided Senate back to the GOP. The nonpartisan Cook Political Report has the race leaning in favor of Democrats.

Laxalt is already focusing his attacks directly on Cortez Masto without mentioning the other Republicans he will have to defeat before he can face her.

He criticized the incumbent for not backing security measures for the border with Mexico, saying she has not supported border security because she stands with the “radical left.” Laxalt also said Cortez Masto has not had any significant accomplishments in federal office or during her time serving as attorney general from 2006 to 2014.

Andy Orellana, spokesman for the coordinated campaign Nevada Democratic Victory, pushed back on those attacks.

“These are the same recycled attacks Republicans tried before and Nevadans will see right through them again,” he said in a statement. “The truth is Laxalt called Senator Cortez Masto a ‘role model,’ and praised her work to combat human trafficking and domestic and sexual violence. Now he’s just a corrupt Trump lackey who never puts Nevadans first.”

He said his office also worked most of the way through a backlog of thousands of rape kits, producing evidence that was submitted to a national database and can be used for prosecutions.

Laxalt said he opposes an infrastructure bill that garnered bipartisan support in the Senate, including 19 Republican votes, because it costs too much and includes a “laundry list of leftist ideas.” This week, Nevada labor leaders gathered to denounce Laxalt’s opposition to the bill.

“And for us to not have had a plan to find a way to bridge the terrible danger they face is simply unconscionable,” he said.

In 2018, Laxalt unsuccessfully ran for governor against Democrat Steve Sisolak, losing the race by 4 percentage points. He attributes that loss to Democrats being motivated after the first two years of the Trump administration.

But what he is seeing on the ground now is dramatically different, he said.

“I would argue now, when you have a massive rise in crime in the streets, you have open borders, you have rising inflation in an economy that’s looking like it’s going to be in grave jeopardy, and the loss of any strength and leadership in the international community that we’ve seen in the Afghanistan debacle, I think we could expect a wave of epic proportions of people simply going to reject the Biden administration, (Cortez) Masto and her fellow Democrats,” he said.

Last year, as Trump’s campaign co-chair in Nevada, Laxalt cast doubt on election security in the state, criticizing Democrats for passing a new election law on a party-line vote amid the pandemic.

The 2021 Legislature later made the mail-ballot provisions applicable to all elections, not just those conducted during an emergency.

After the election, Laxalt was one of the public faces in the effort to overturn the results in Nevada. He has not backed down from his claims that fraudulent ballots were cast.

Nevada Secretary of State Barbara Cegavske, a Republican, said her office found no evidence to support claims of massive voter fraud in the election. Laxalt said he thinks Cegavske has no way to know because she did not review the hundreds of thousands of mail ballots.

The Trump campaign and its allies filed multiple lawsuits challenging the outcome of the election, but all were eventually dismissed or withdrawn.

Laxalt said those claims didn’t hold up in court because the system is not set up to look into voter fraud.

“First of all, the lawsuits were filed late,” he said. “They were filed in (a) very short period of time. And none of these lawsuits actually had the capacity to investigate individual voters.”

Laxalt acknowledged Thursday that Joe Biden is now the president but said he still does not know whether Biden won Nevada. According to the official tally, Biden won the state by 33,000 votes, or 2.4 percentage points.