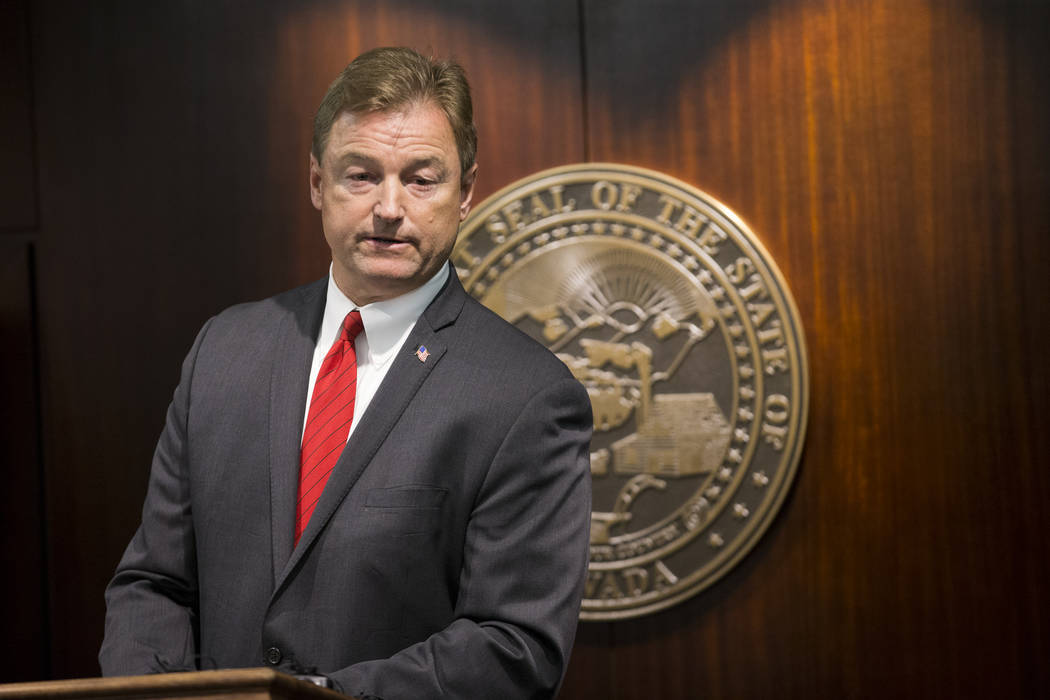 WASHINGTON — A central figure in the Senate effort to repeal and replace Obamacare — U.S. Sen. Dean Heller, R-Nev. — said Wednesday that he does not see a compromise on that legislation that could muster a GOP consensus by week’s end.

Senate Majority Leader Mitch McConnell, R-Ky., yanked the Senate bill from consideration this week when conservatives and moderates came out publicly against portions of the legislation to replace the Affordable Care Act.

Even though he pulled the bill, McConnell wants his GOP caucus to work toward a compromise on the legislation by Friday — a deadline Heller said is unlikely.

“I don’t see it at this point. The conversations I have had to this point, I’m just not satisfied with,” Heller told the Las Vegas Review-Journal in his first interview since announcing his opposition to the Senate health care bill in Las Vegas last Friday during a news conference with Gov. Brian Sandoval.

“I have not changed my position,” Heller said.

Heller said he has been involved in 10 meetings since last week, trying to tweak the bill that would cut Medicaid by roughly $800 billion and end Medicaid expansion, a program that provided coverage for an additional 200,000 people in Nevada.

One of those meetings was at the White House on Tuesday, where Heller said he told President Donald Trump and members of his caucus about his concern over Medicaid and the number of children and families in Nevada who are covered under the current expansion.

“We just don’t want the rug pulled out from under those families,” Heller said.

His opposition to the Senate bill prompted a threat by a pro-Trump super PAC that created advertisements attacking Heller for his pledge to vote “no” on the current legislation.

The super PAC, America First Policies, pulled a $1.3 million ad buy against Heller in Nevada after the White House meeting on Tuesday. A spokeswoman for the group vowed to resume the ads if Heller continues his opposition.

Heller is considered the most vulnerable Republican senator in 2018, running for re-election in a state that voted for Hillary Clinton in the 2016 presidential election and elected a Democrat, Catherine Cortez Masto, to the seat vacated by Senate Minority Leader Harry Reid.

Democrats and liberal-leaning special interest groups are running several media campaigns against Heller in the state.

Rep. Jacky Rosen, D-Nev., said she will run for the Senate. Rep. Dina Titus, D-Nev., is weighing a bid, as well.

Republicans in the Senate, where they hold a slim 52-48 majority, were furious with the super PAC for attacking a Republican before a crucial vote on the legislation.

Heller is aware of the political landscape and brushed off the attack.

But individual senators, like Susan Collins of Maine, Johnny Isakson of Georgia and McConnell, brought up the super PAC ads during the White House meeting, Heller said.

Collins, who also opposes the Senate bill, told reporters she was “appalled” by the ads and amazed at the attempt to intimidate a lawmaker over an issue pertaining to constituents.

Other GOP leaders worried that the ads would galvanize Heller on his position and weaken his already difficult re-election bid — and threaten the ability of the GOP to hold a majority in the Senate.

Heller said other senators were concerned about the fact “those ads were out there.”

But Heller remains in the political crosshairs over Medicaid.

A recent poll shows the program gaining in popularity in Nevada, despite the GOP crusade to repeal the 2010 bill that has become the legacy of President Barack Obama.

About those crosshairs, Heller said: “I wouldn’t want to be there every day.”

But Heller concedes the difficult choices Republicans face on the bill. Appeasing states that expanded Medicaid programs and those that did not — “that’s the rub,” he said.

Some conservatives oppose the bill because it does not cut Medicaid enough.

Collins and other moderates are also concerned not only with cuts to Medicaid, but also those to Planned Parenthood, which provides cancer screening and family planning for many low-income women.

Heller sent mixed signals on Planned Parenthood during a town hall meeting earlier this year, and he supported a seven-year phaseout of the Medicaid expansion during negotiations.

A vote on a rewrite of the Senate health care bill could come after the July 4th weekend.

Heller said he and his wife will spend the holiday with their horses in a parade in Ely, and then spend time at Basin and Range National Monument during the weeklong recess.