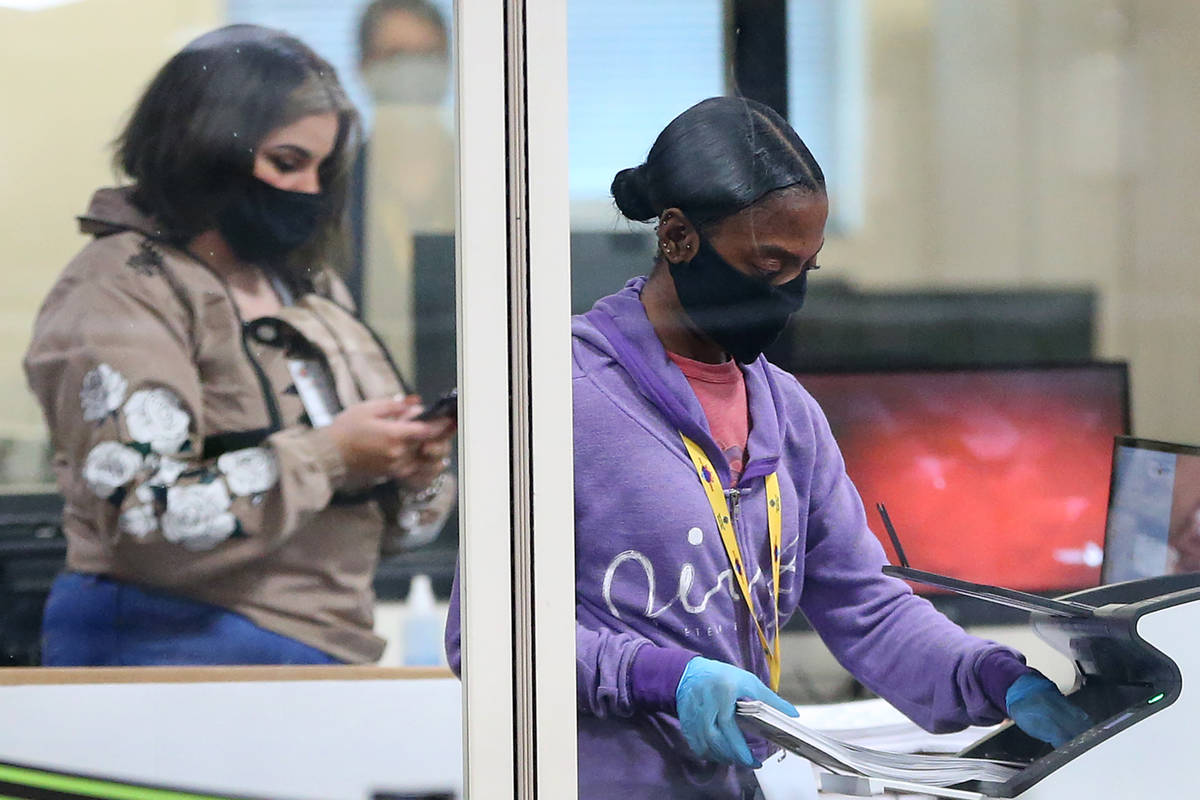 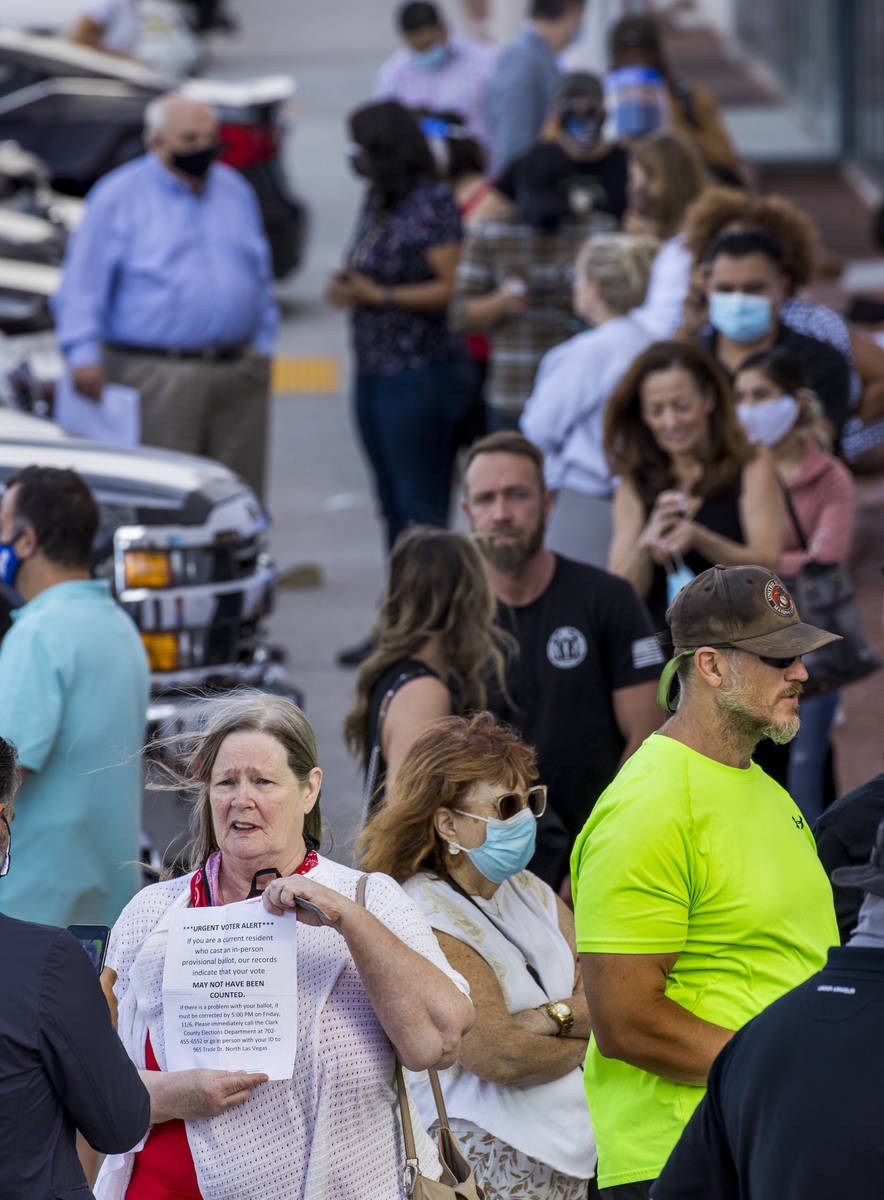 Voter Karen Zamrok of Las Vegas shows the letter she received to cure her vote as she awaits in line with others due to various ballot issues outside the Clark County Election Department as Nevada's count continues on Friday, Nov. 6, 2020, in North Las Vegas. L.E. Baskow/Las Vegas Review-Journal) @Left_Eye_Images 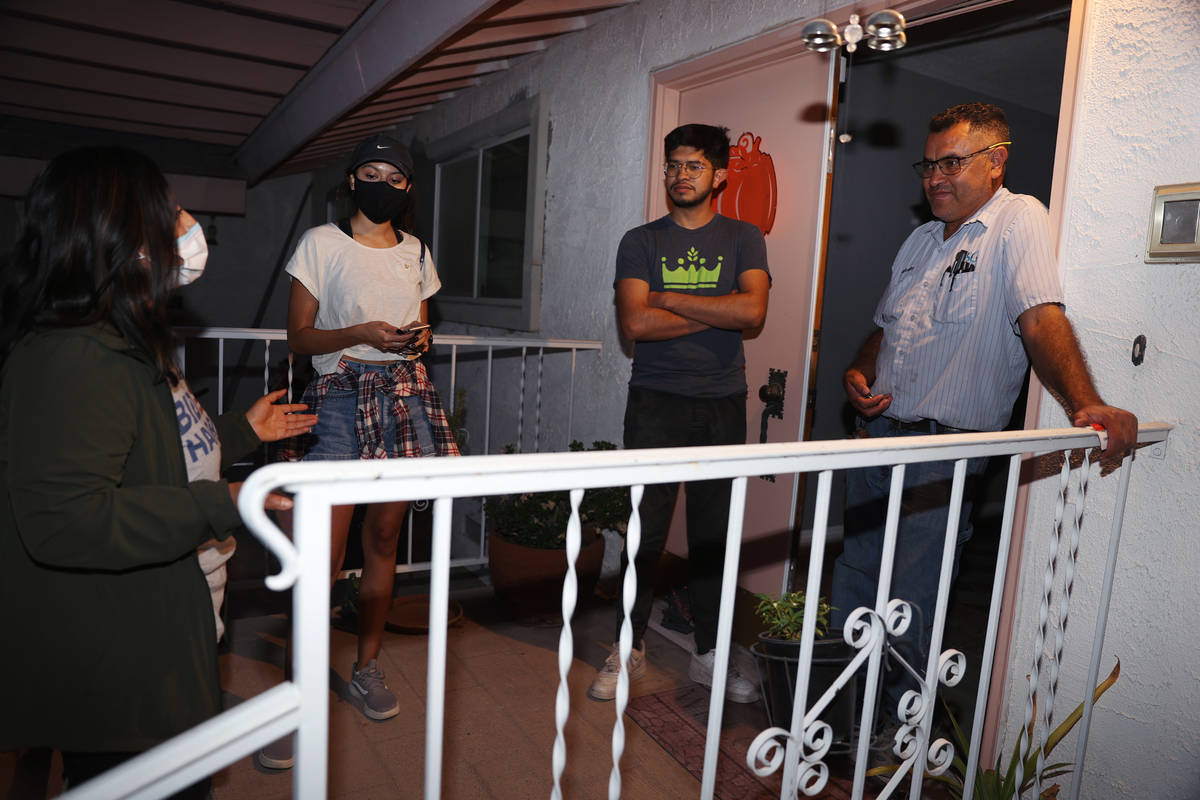 Blanca Ortiz, left, deputy coalitions director in Las Vegas for the Biden campaign, and April Kacura, field organizer for the Nevada Democratic Party, assist Salvador Gonzalez, 20, with information to help him submit his identification to the Nevada Secretary of State to make his ballot count, at his Las Vegas home with his father Brian, Thursday, Nov. 5, 2020. (Erik Verduzco / Las Vegas Review-Journal) @Erik_Verduzco 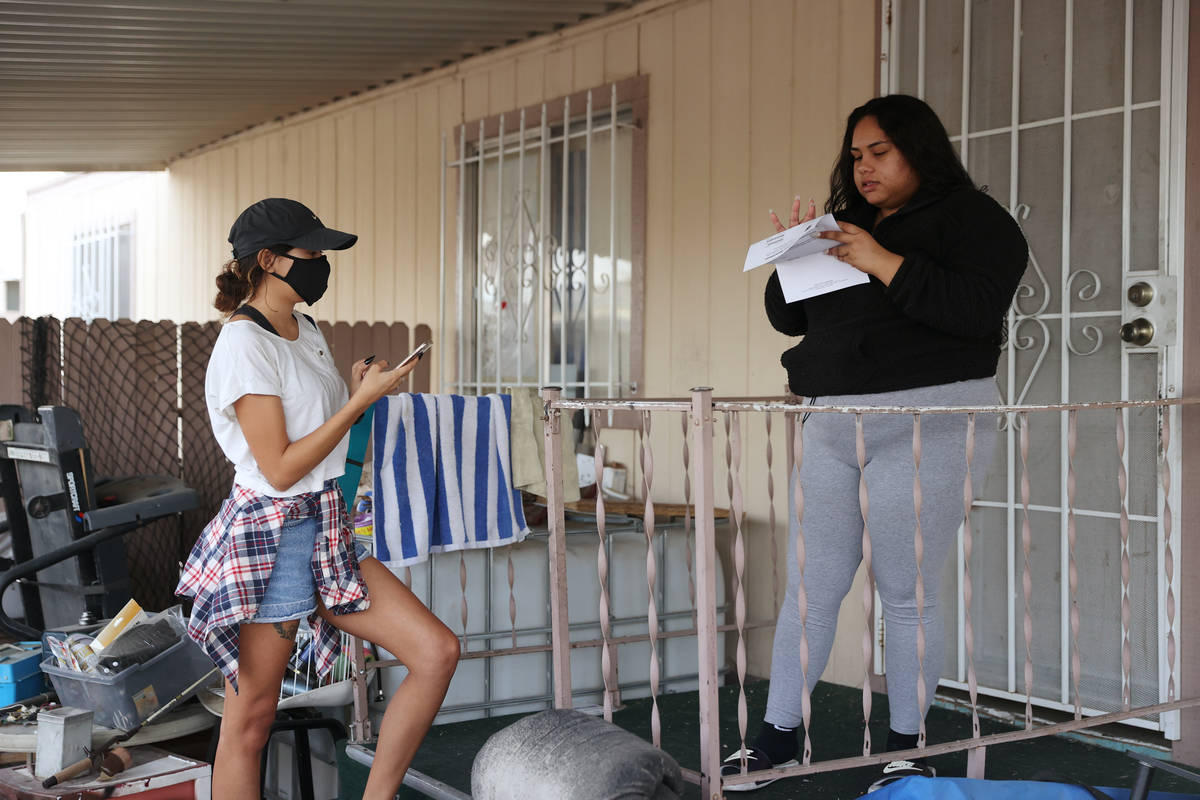 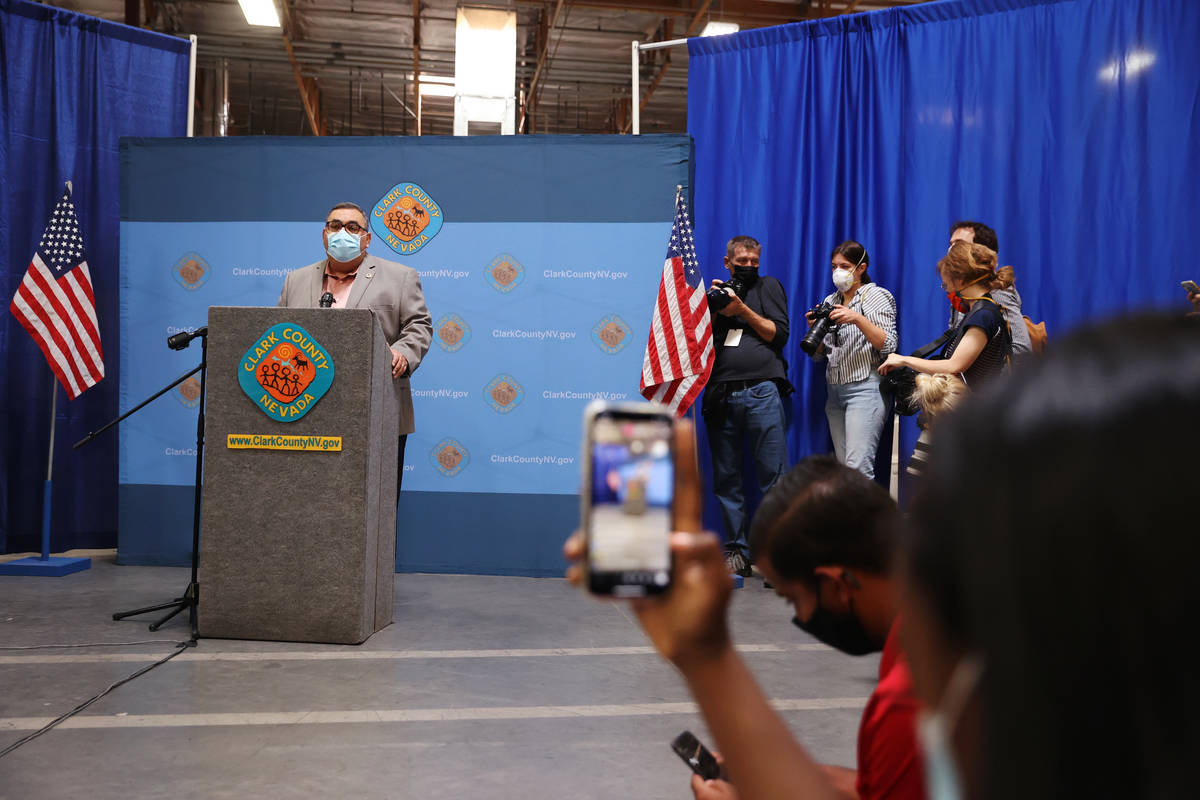 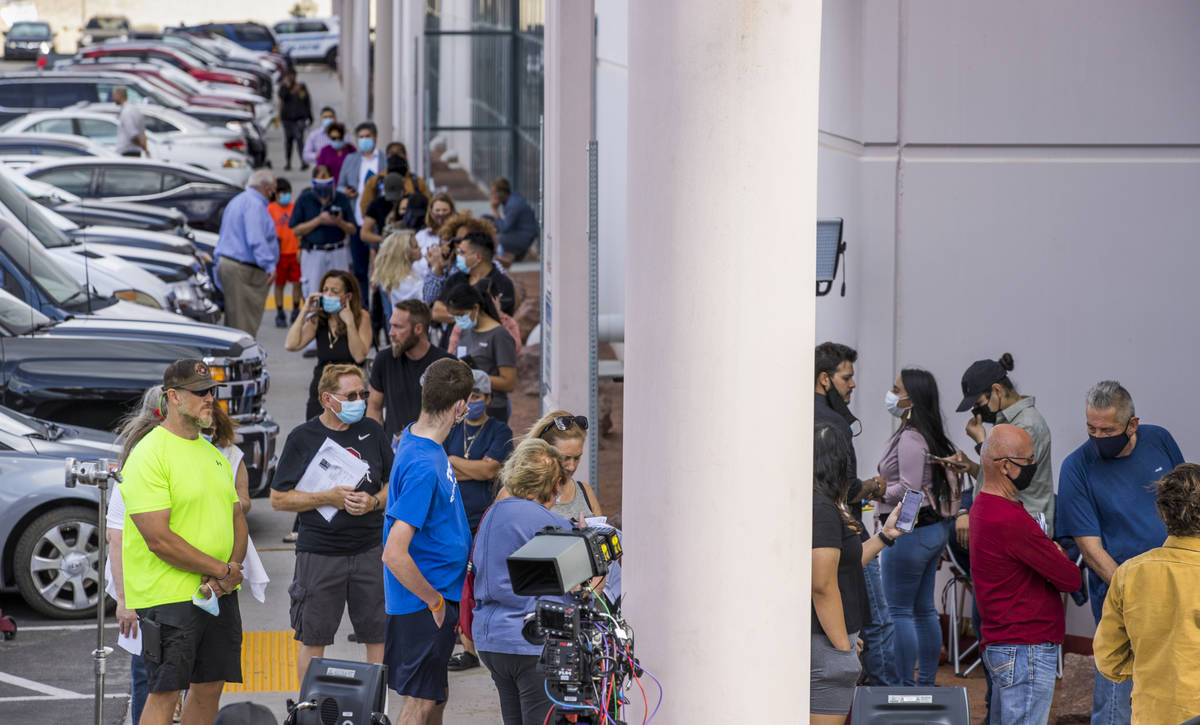 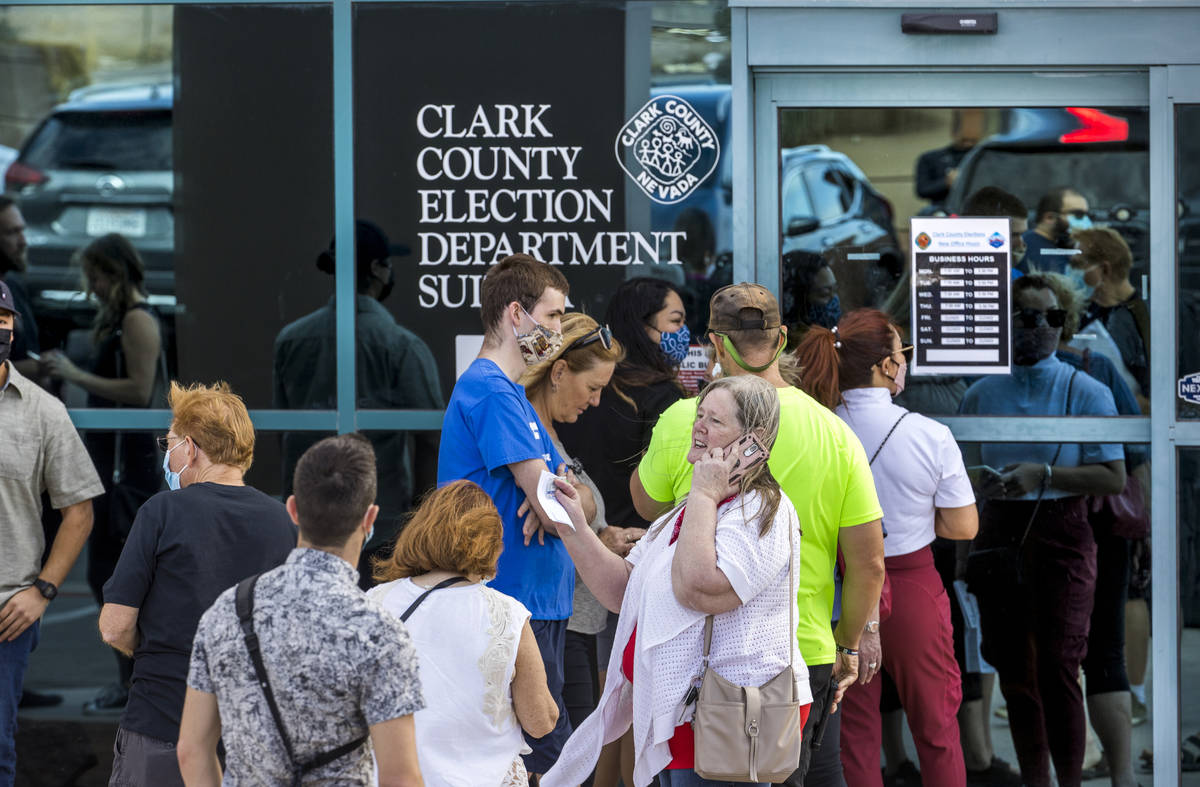 Voter Karen Zamrok, center, of Las Vegas talks on the phone after receiving a letter to cure her vote as she awaits in line with others due to various ballot issues outside the Clark County Election Department as Nevada's count continues on Friday, Nov. 6, 2020, in North Las Vegas. L.E. Baskow/Las Vegas Review-Journal) @Left_Eye_Images

Nearly 600,000 of Nevada’s general election votes have been cast by mail in this election — about half of all reported votes. That’s more mail ballots than have ever been cast in any previous election in the state.

Elections experts have said mail-in ballots are safe, and Nevada’s Republican Secretary of State Barbara Cegavske testified this year that her office did not find any fraud during the state’s primary election, which was conducted almost entirely by mail.

Under Assembly Bill 4, passed during a special session of the Legislature in August, all active registered voters in Nevada were sent a mail ballot.

Here are details of the ballot counting and verification process, according to information provided by the Nevada secretary of state’s office.

Ballots in Nevada are counted by local elections officials, the county clerk or the county registrar of voters and their staffs. Statewide, voter registrations are overseen by Secretary of State Barbara Cegavske, who works with local officials to ensure elections are conducted properly. Under state law, observers are allowed to watch the counting process, and have done so in this election.

All mail ballots in Clark County were counted first by running them through a digital scanner. If the scanner cannot read the ballot or determine the voter’s intent, the ballot is sent to an adjudication or duplication team, both of which are overseen by a bipartisan election board. County elections officials have said about 70 percent of ballots are sent to be reviewed by elections officials.

Related: Biden has widened lead over Trump in Nevada

All voting equipment used in the state, including mail ballot scanners, has to meet or exceed the federal voting system standards. It also must be independently tested to determine it functions correctly. Independent testing is performed by the Nevada Gaming Control Board.

When will ballot counting end?

All mail ballots had to be postmarked by Nov. 3 or dropped off at a ballot drop-off location by 7 p.m. on Election Day in order to be counted. Counties have until seven days (Nov. 10) after the election to receive ballots in the mail, but only ballots postmarked on or before Election Day will be counted.

Ballots received by the county in the mail without a postmark, or with an illegible postmark, will be considered mailed by Election Day, but only if they were received by Nov. 6. The deadline for counting all ballots is Nov. 12. After that, the final canvass of the vote will happen on Nov. 16 when state officials review the results.

How ballots are verified

Ballot envelopes are individually bar coded to specific voters and printed on special paper that makes them impossible to counterfeit easily. Officials verify signatures on the outside of ballot envelopes and set aside those that don’t match for further investigation. An electronic system also prevents people from casting more than one vote.

All mail ballots had to be returned in an authorized ballot return envelope, which had to be signed by the voter. That signature is compared to the signature on file at the election office. If the signature does not match, the ballot is rejected.

According to figures posted by the secretary of state, more than 8,000 ballots thus far required a signature to be cured.

Ballots with signature problems can’t be validated until going through the signature cure process.

Election officials will try to contact the voter using the information that’s on file with the county. Those efforts will be made by mail, but could also include a telephone call or an email if a voter has provided that information to the county.

The deadline to cure a missing or mismatched signature is Nov. 12.

When is the election count official?

Results are unofficial until each county certifies the results, which can take up to 13 days after the election.

How to check the status of a ballot

Go to the secretary of state’s website or the Clark County elections department website and check a voter’s history. (After casting a mail or in-person ballot, the voter history will record that a person voted in the 2020 general election.)

Some voters may see a status that says “mail ballot received” rather than “mail ballot counted” when they log in to check their status. According to the secretary of state’s office, that’s not a cause for concern; it simply means that the ballot counted status hasn’t yet been applied, even though most ballots have already been tabulated.

Where can I find out more about election security?

The secretary of state’s office has posted a “myths versus facts” document on its website to address some of the common concerns about voter fraud.

More questions and answers about voting in Nevada can be found on the secretary of state’s website or on the website of the Clark County elections department.

A previous version of this story listed an incorrect ballot counting deadline. The deadline is Nov. 12.