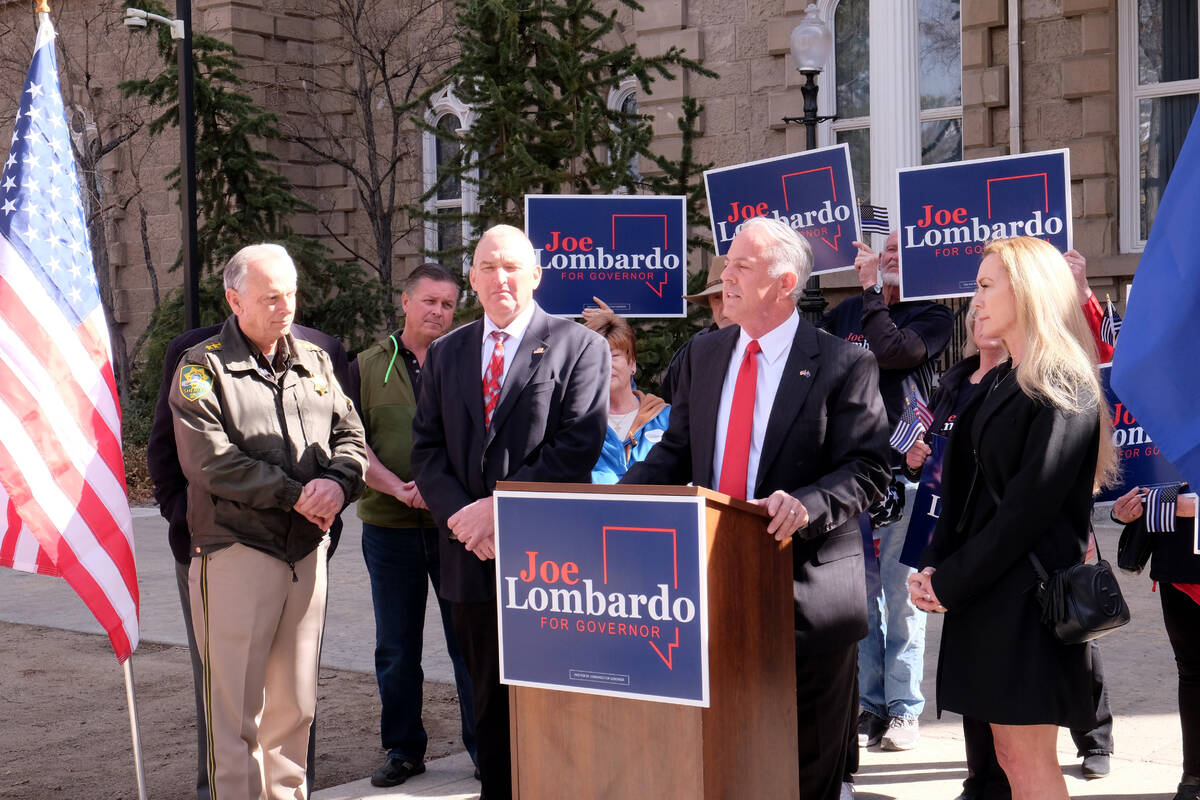 Clark County Sheriff Joe Lombardo, a Republican, speaks to supporters and the media outside the state Capitol Monday after filing to run for governor. March 14, 2022 (Bill Dentzer/Las Vegas Review-Journal) 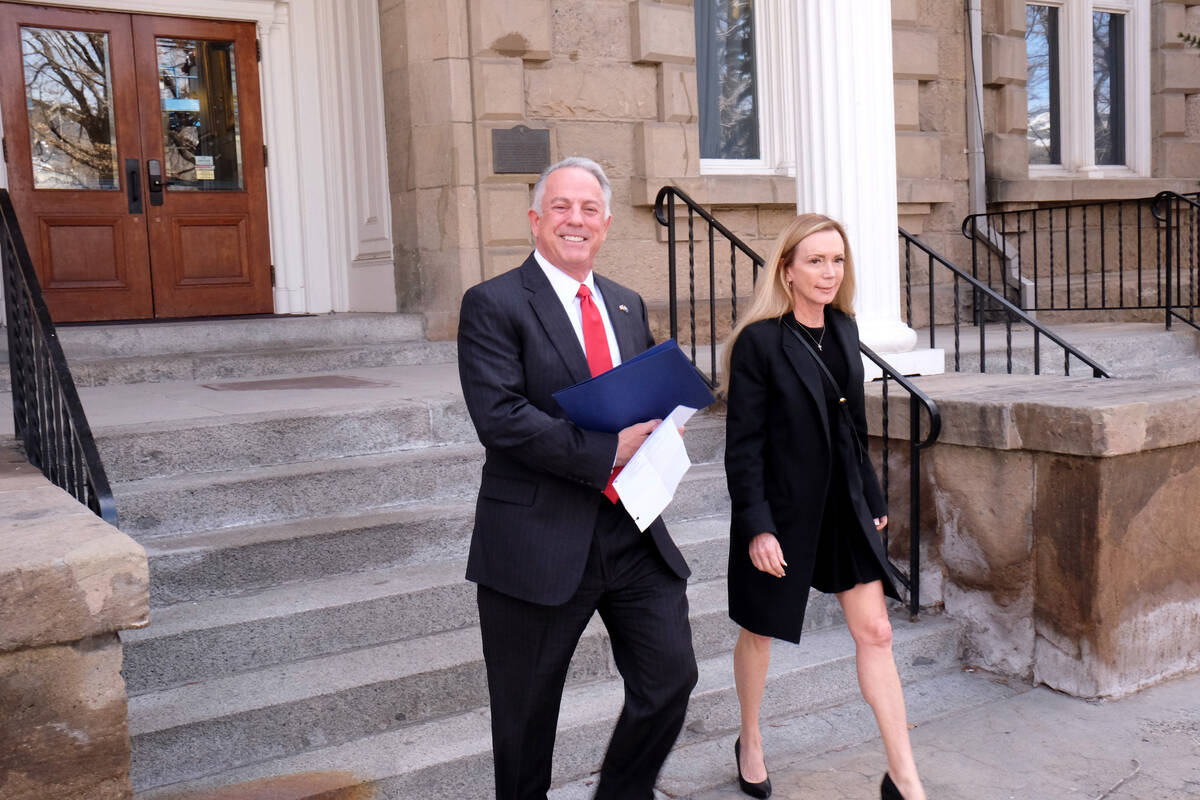 Clark County Sheriff Joe Lombardo leaves the Capitol Monday with his wife, Donna, after filing his candidacy for governor with the secretary of state. March 14, 2022 (Bill Dentzer/Las Vegas Review-Journal) 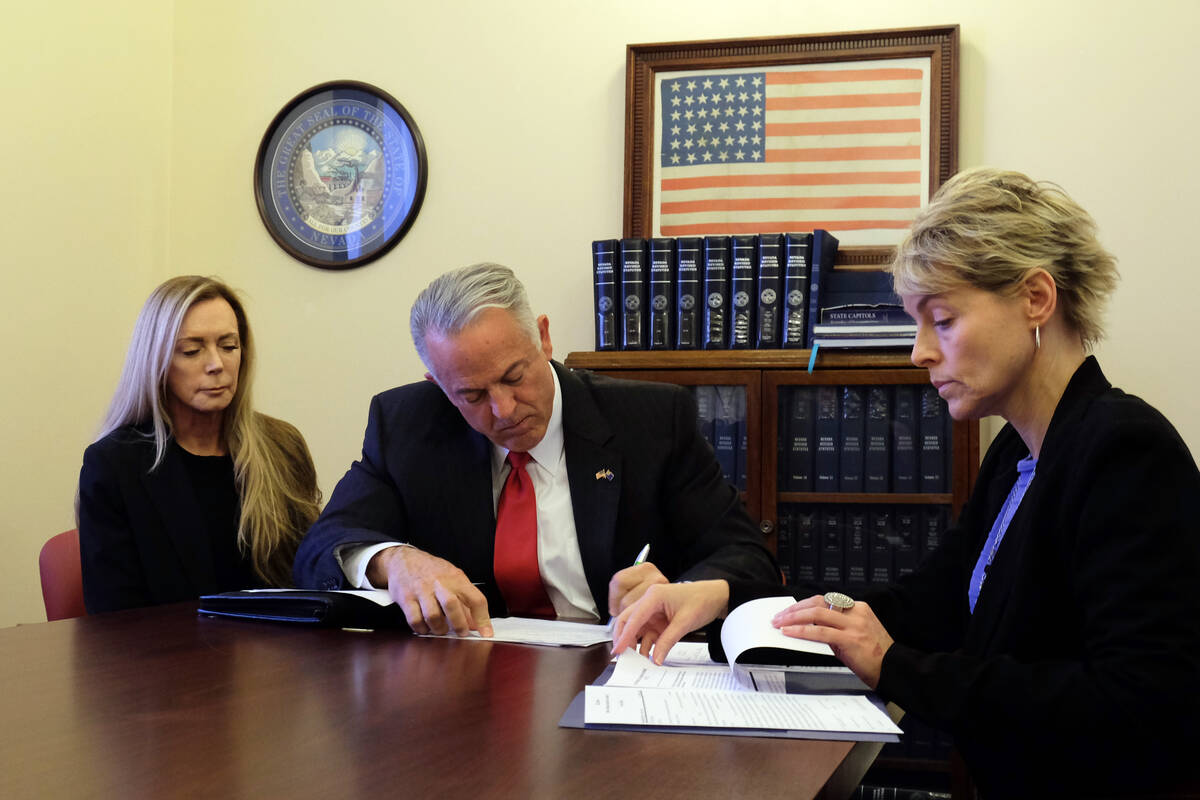 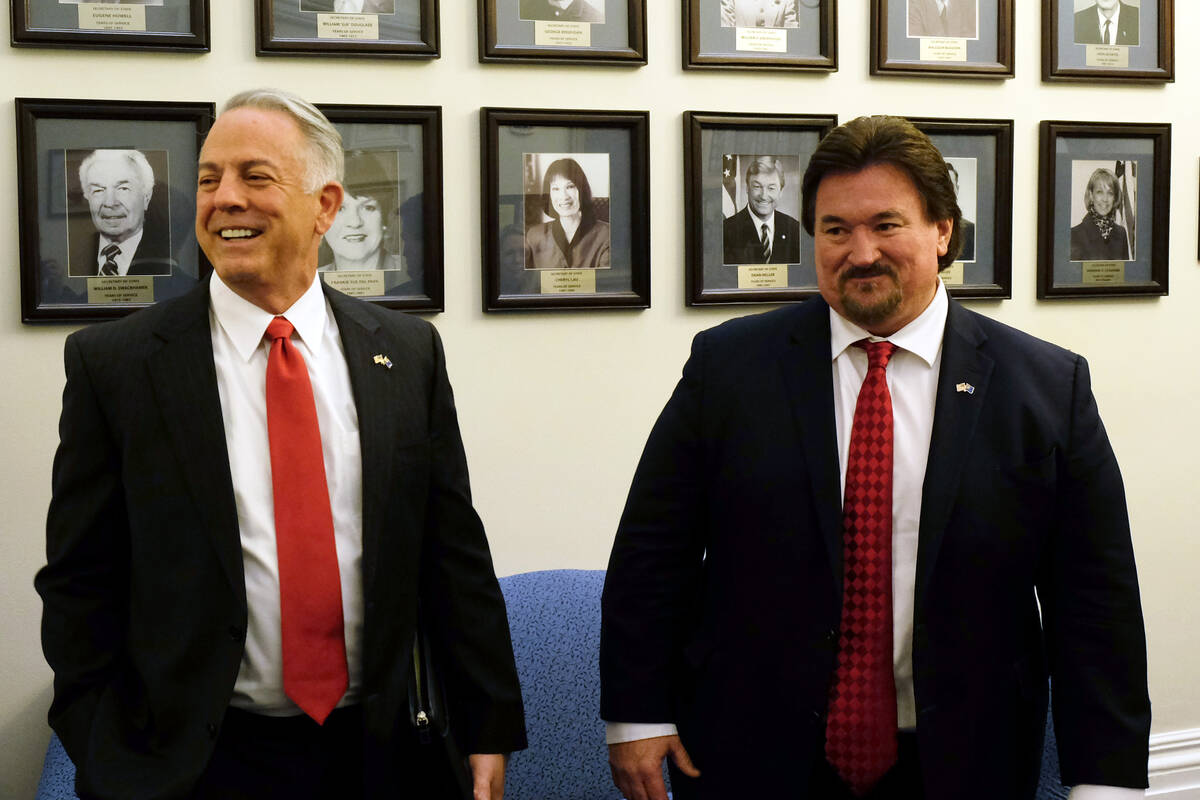 Cortez Masto kicked off her re-election campaign at an electrical workers union local in Reno after filing for the race.

Lombardo said he made the trip up from Las Vegas to file at the state Capitol to be “at “the seat of state government.”

“Why are we here today? Because Nevada’s in need of change,” he said in brief remarks after completing paperwork in the secretary of state’s office with his wife, Donna. “I personally believe the leadership and experience that I bring to the table is very important for Nevada and moving forward.”

Lombardo currently leads the Republican field in both fundraising and in early polling, though he trails Democrat Gov. Steve Sisolak in both areas. As the presumptive front-runner, Lombardo sustains consistent criticism from his GOP opponents, who dispute his conservative credentials and scoff at his reasoning for skipping debates to date. Lombardo has said he will participate in debates after the filing period closes.

Democrats also have directed most of their attacks at the sheriff, who in 2017 stood side by side with Sisolak, then chair of the Clark County Commission, as the area responded in the aftermath of the Route 91 Harvest festival mass shooting on Oct. 1. 2017.

“I’ve been very communicative. It’s unfortunate people think that I’m avoiding the press during this process and that is not the case,” he said in response to questions Monday. “I mean, I could enumerate all the different interviews I’ve done, the outreach I’ve done and the eight years of outreach to the community, and I have never shied away from public discourse or confronting the problems as they’ve been presented.”

As for his conservative credentials, Lombardo said he was a lifelong Republican. He noted that one candidate — North Las Vegas Mayor John Lee, whom he did not call out by name — had changed parties to run as a Republican.

In Reno on Monday, Cortez Masto appeared backed by construction trades and professional firefighters, touting her support for pandemic assistance that helped save jobs and fund infrastructure improvements, as well as federal aid to fight wildfires.

“This campaign is about one thing: the people of Nevada,” she said in remarks distributed by her campaign. “Right now, I’m focused on creating more jobs, lowering costs and keeping Nevadans safe.”

Also on Monday, former Clark County Commissioner Tom Collins filed to run as a Democrat against Sisolak in the primary. Collins, who also served in the Nevada Assembly, has been a vocal critic of Sisolak on social media. Democratic Rep. Steven Horsford filed for re-election to the 4th Congressional District on Monday, too.

“Earlier today, I submitted the paperwork to be on the ballot. Today is a monumental day for our campaign, and we are one step closer to keeping Nevada blue,” Horsford said in a fundraising appeal to supporters. “Now that we’re on the ballot, the work begins. And the only way we can continue our work is with the support of this grassroots team behind us every step of the way.”

Also on Monday, Chance Bonaventura, an aide to Las Vegas Councilwoman Michele Fiore, filed to run as a Republican in the 4th District.

The first incumbent Clark County commissioner running for re-election drew a challenger on Monday. John Ovnick, a Republican, filed to run against Democratic incumbent Justin Jones in District F. Two of Jones’ colleagues, commission chair Jim Gibson and Tick Segerblom — both Democrats — have yet to draw any challengers.