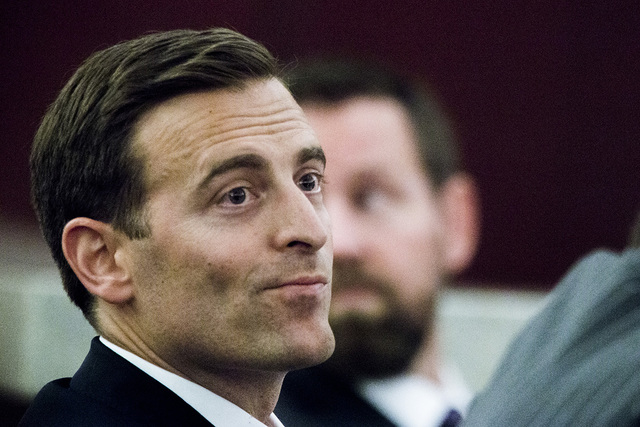 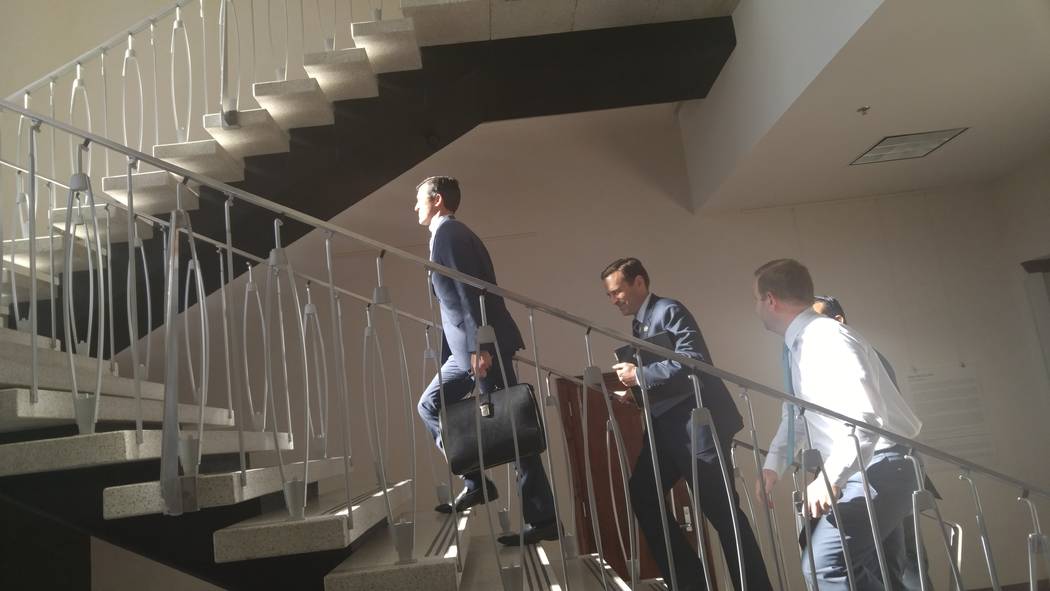 Attorney General Adam Laxalt walks up a staircase of the Legislative Building in Carson City before a meeting with lawmakers about the circumstances of his meeting with Nevada Gaming Control Board Chairman A.G. Burnett. Ben Botkin Las Vegas Review Journal 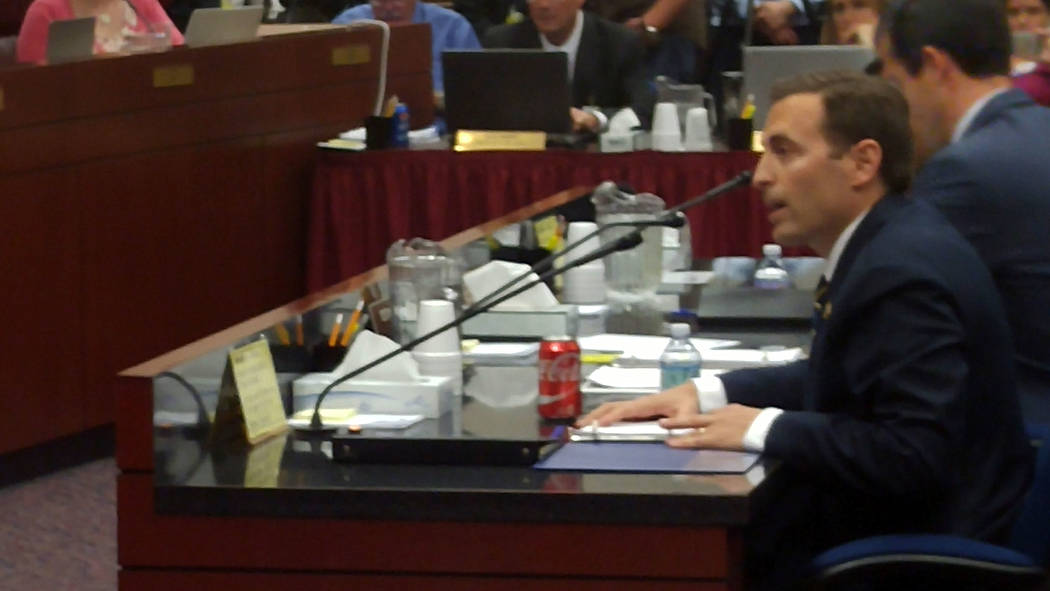 Attorney General Adam Laxalt talks on Wednesday, May 17, 2017, to the Assembly Ways and Means Committee and Senate Finance Committee about the circumstances of his meeting with Nevada Gaming Control Board Chairman A.G. Burnett. Ben Botkin Las Vegas Review Journal 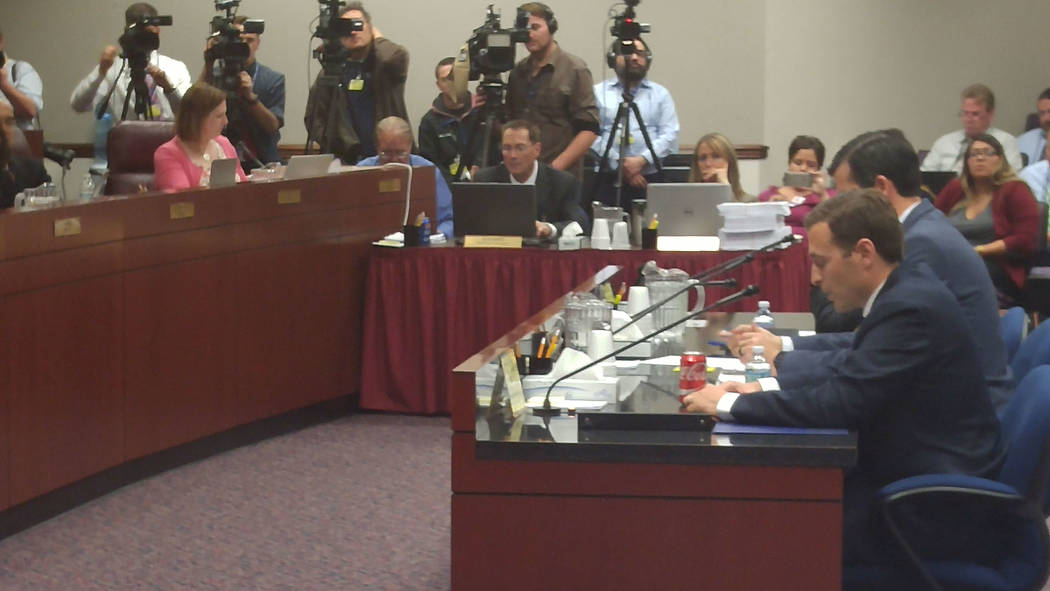 Attorney General Adam Laxalt talks on Wednesday, May 17, 2017, to the Assembly Ways and Means Committee and Senate Finance Committee about the circumstances of his meeting with Nevada Gaming Control Board Chairman A.G. Burnett. Ben Botkin Las Vegas Review Journal

CARSON CITY — Nevada Attorney General Adam Laxalt told state lawmakers Wednesday that he at no time pressured the Gaming Control Board to intervene in a private legal dispute between Las Vegas Sands Corp. and a former employee.

Laxalt, in his first appearance before the 2017 Legislature, responded to concerns expressed by Gaming Control Board Chairman A.G. Burnett about a private meeting the two men had in March 2016 about the Sands case. Burnett secretly recorded the conversation.

Laxalt and Burnett testified before a joint meeting of the Senate Finance and Assembly Ways and Means committees. The panels met to hear Assembly Bill 513, a bill requested by Ways and Means Chairwoman Maggie Carlton, D-Las Vegas, which would remove the attorney general’s office as counsel for the Gaming Control Board and Gaming Commission and establish an independent legal counsel for the regulators.

Burnett told the committee he thought the Laxalt matter was settled. But Carlton issued a subpoena this month and received Burnett’s recording and an affidavit he prepared. The information was made public in the week ahead of Wednesday’s hearing.

The hearing and surrounding debate about the recording has been characterized by Laxalt and some fellow Republicans as a political attack. Laxalt is considering a run for governor next year.

But Carlton and other Democrats have expressed concern about the nature of the meeting and whether Laxalt’s discussion with Burnett was done as a favor to Sands, a campaign donor to Laxalt.

Laxalt said that was not the case and that his legal interest in filing a “friend of the court” brief was rooted in protecting the agency and its ability to preserve confidentiality and the integrity of Nevada’s gaming industry.

Laxalt said such a brief actually could have harmed Sands’ legal position in the case. The transcript of the recording reflected this narrative.

“I know you want to stay out of the broader piece. I know we don’t — I know you don’t, and we agree — don’t even want to touch this joint investigation and whether it covers all these other agencies,” Laxalt said in the conversation with Burnett.

“Sands can battle that out and figure out whether they can convince a judge that it should or shouldn’t,” Laxalt said. “But as to the narrow piece, are you going to support — I mean, I think it’d be a four-page amicus, and it’ll be as narrow as you would be comfortable with, simply laying out ‘Here’s the law as we see it.’ It doesn’t even need to mention the facts of the case. It could be literally that narrow.”

Documents had been sought by the former Sands employee in his wrongful termination lawsuit, which was later settled. No brief from the attorney general or gaming regulators was ever filed in the case.

Burnett said he surreptitiously recorded the conversation out of an abundance of caution. Burnett said he had received information that Laxalt was going to talk to him about the Sands lawsuit and that he was concerned because a decision had been made not to intervene.

Laxalt said his position all along was that most of what Sands wanted in the way of legal intervention by the Gaming Control Board was not appropriate.

Burnett said he turned the recording of his conversation with Laxalt over to the FBI to ensure that the gaming agency was protected in the event the issue became public. The FBI found no wrongdoing in the conversation.