The legislative building in Carson City is getting $15 million in upgrades. 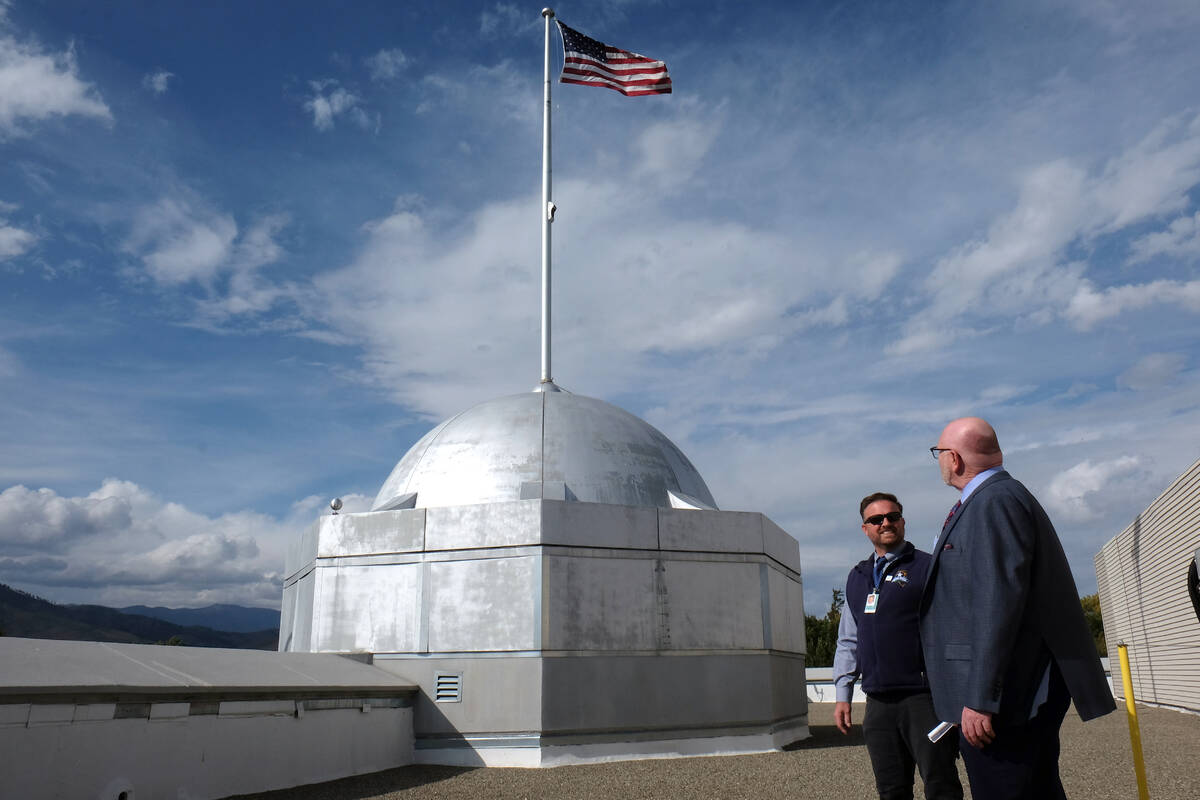 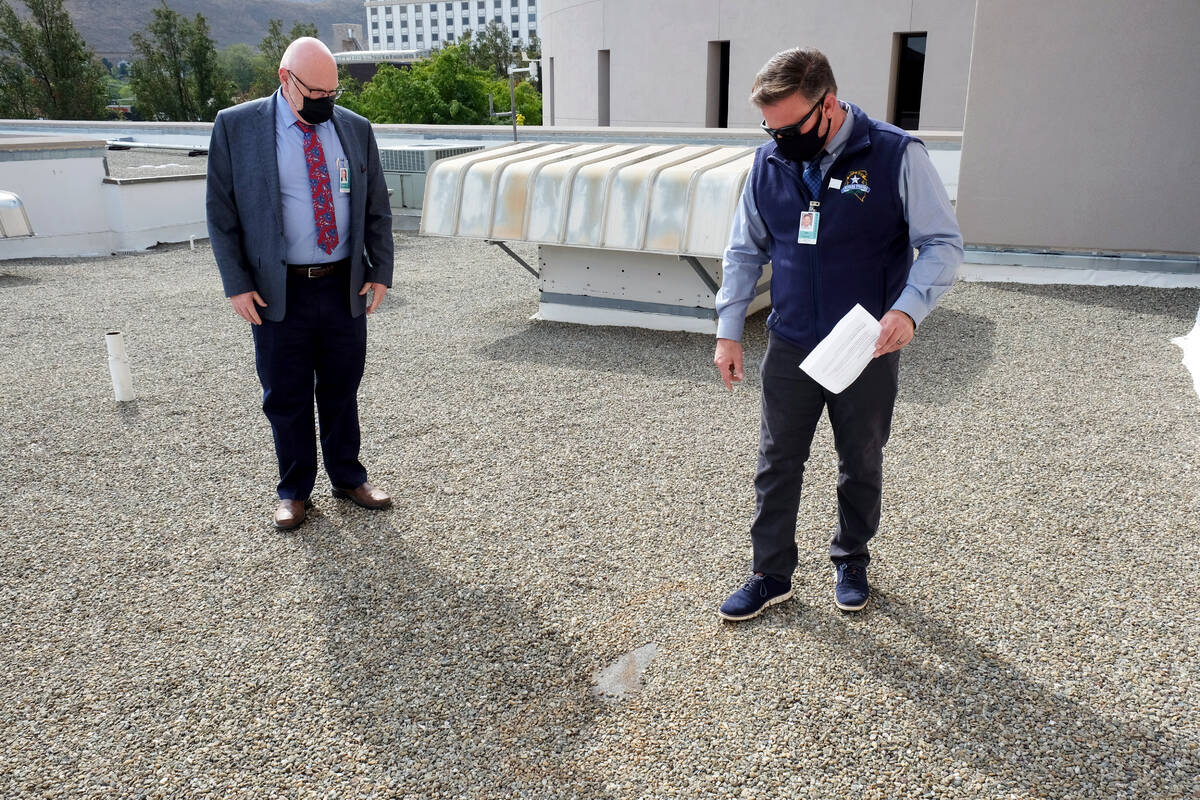 From left, Roger Wilkerson, chief of the Legislative Counsel Bureau administrative division, and facilities manager Jon Vietti stand by an area of the Carson City legislative building roof that has bubbled up and is in need of repair. October 7, 2021. (Bill Dentzer/Las Vegas Review-Journal) 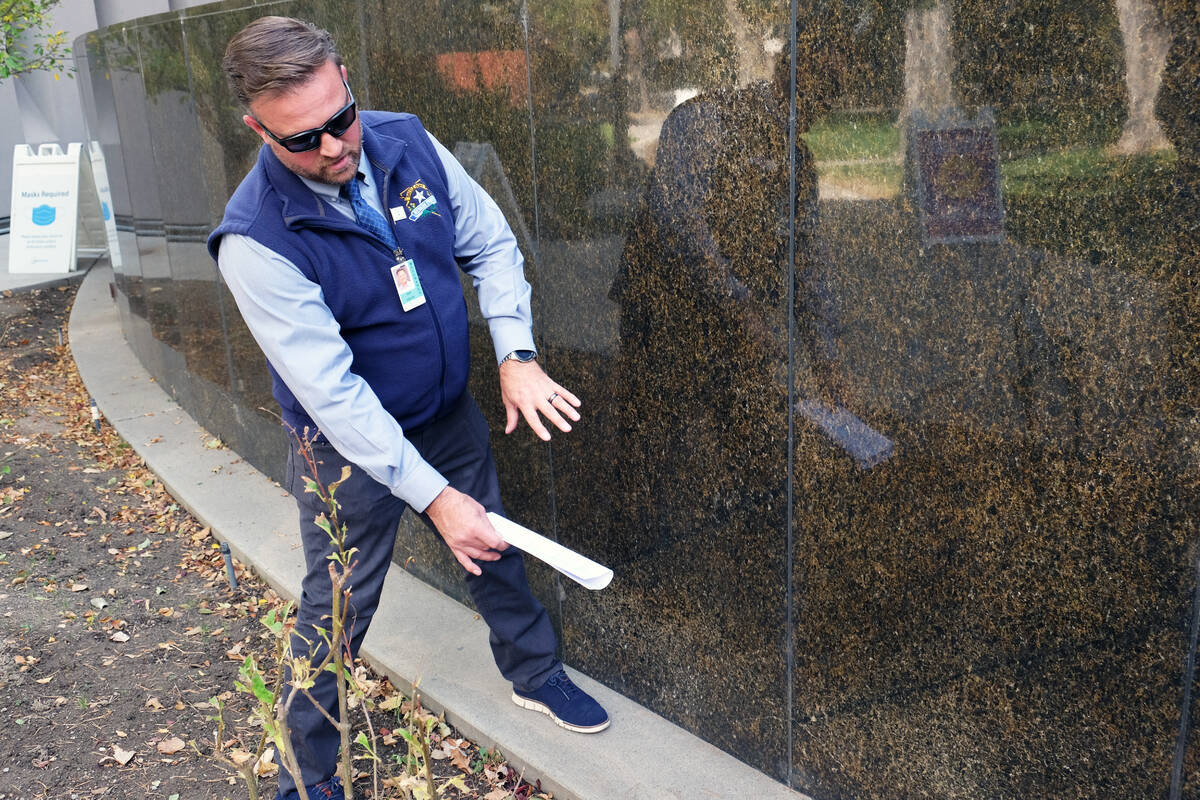 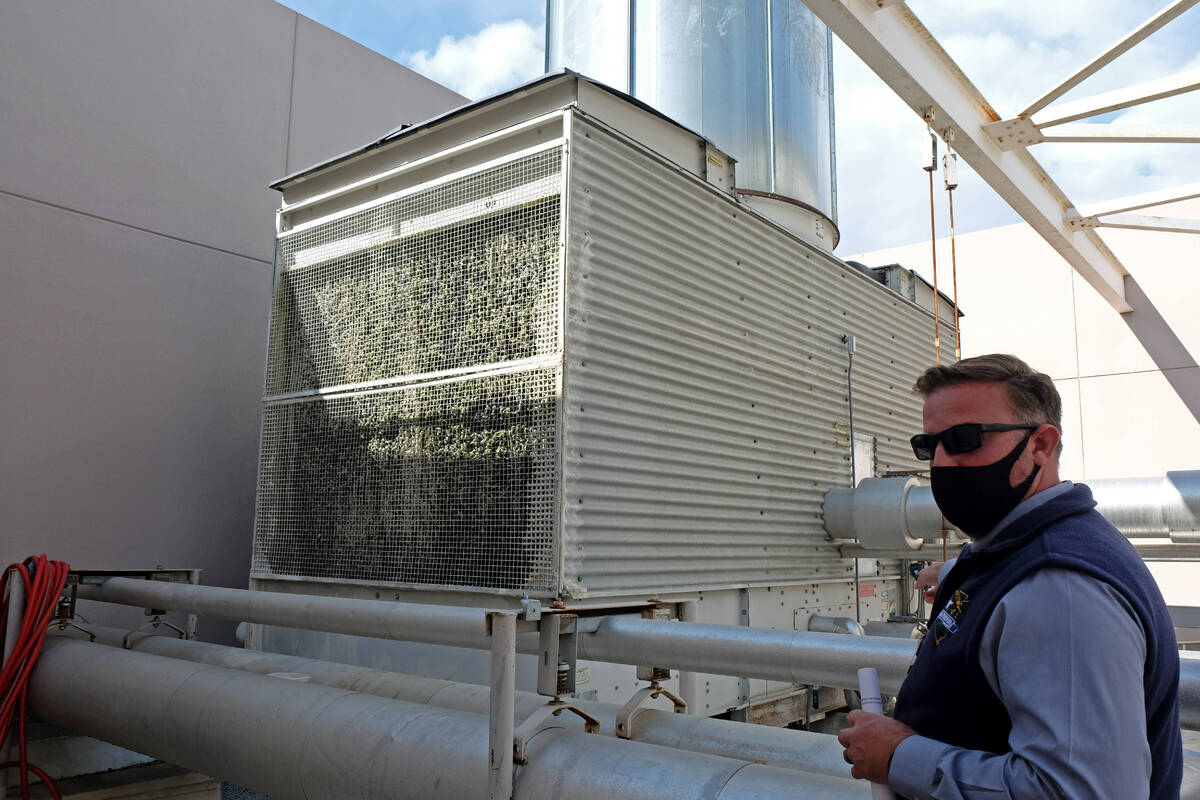 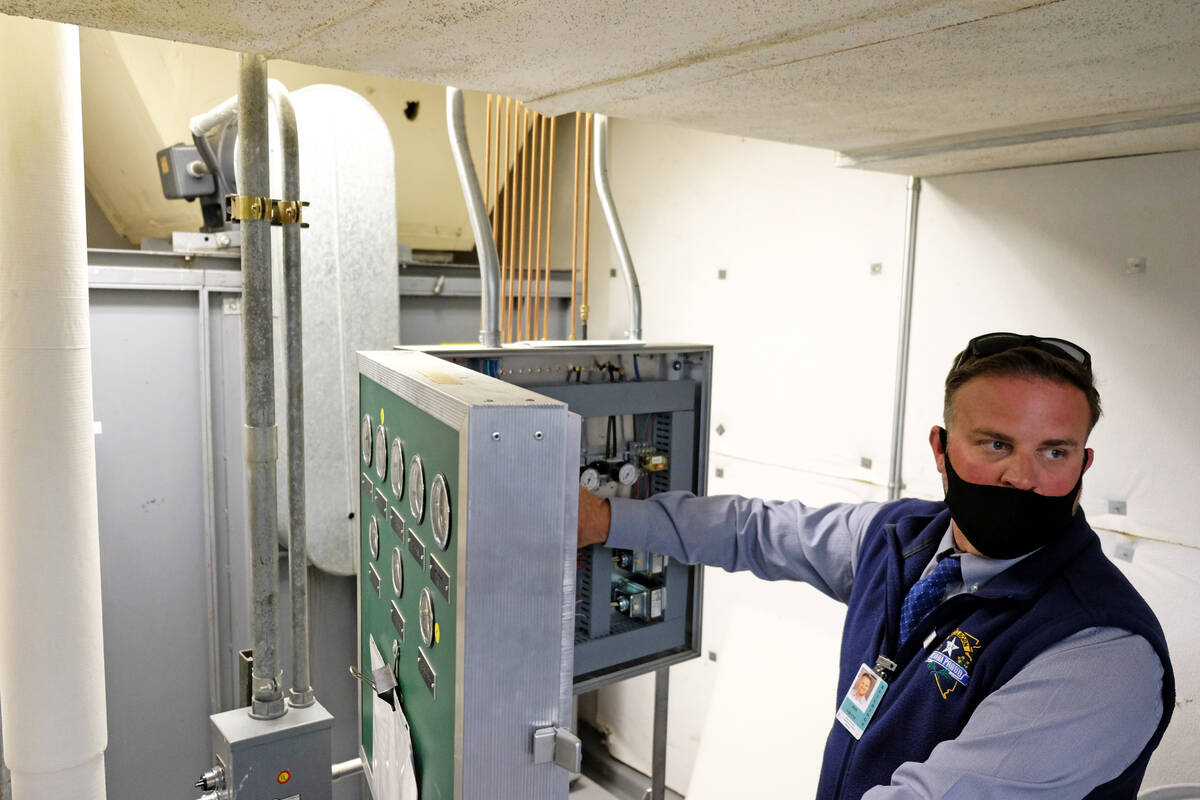 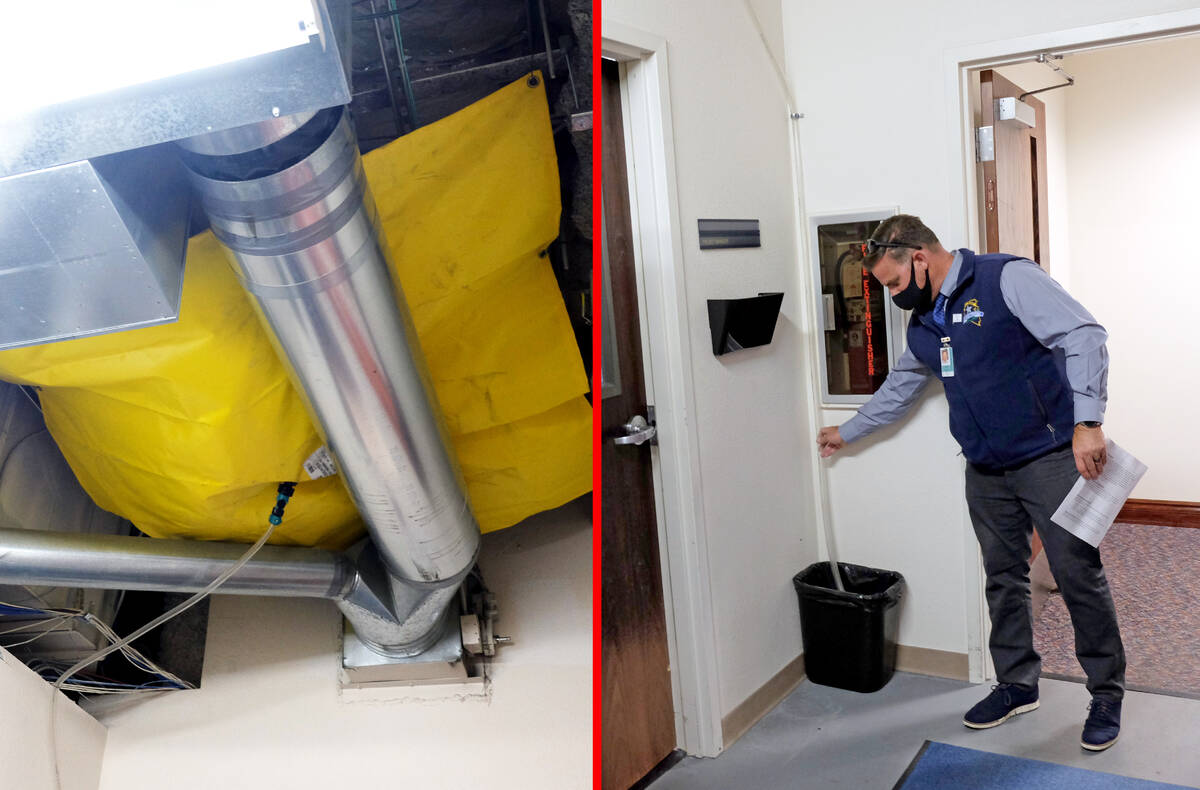 At left in this split image: A plastic bladder has been installed to collect and channel water leaking into a room of the legislative building. In the image at right, the water is funnelled into a bucket on the floor. October 7, 2021. (Bill Dentzer/Las Vegas Review-Journal) 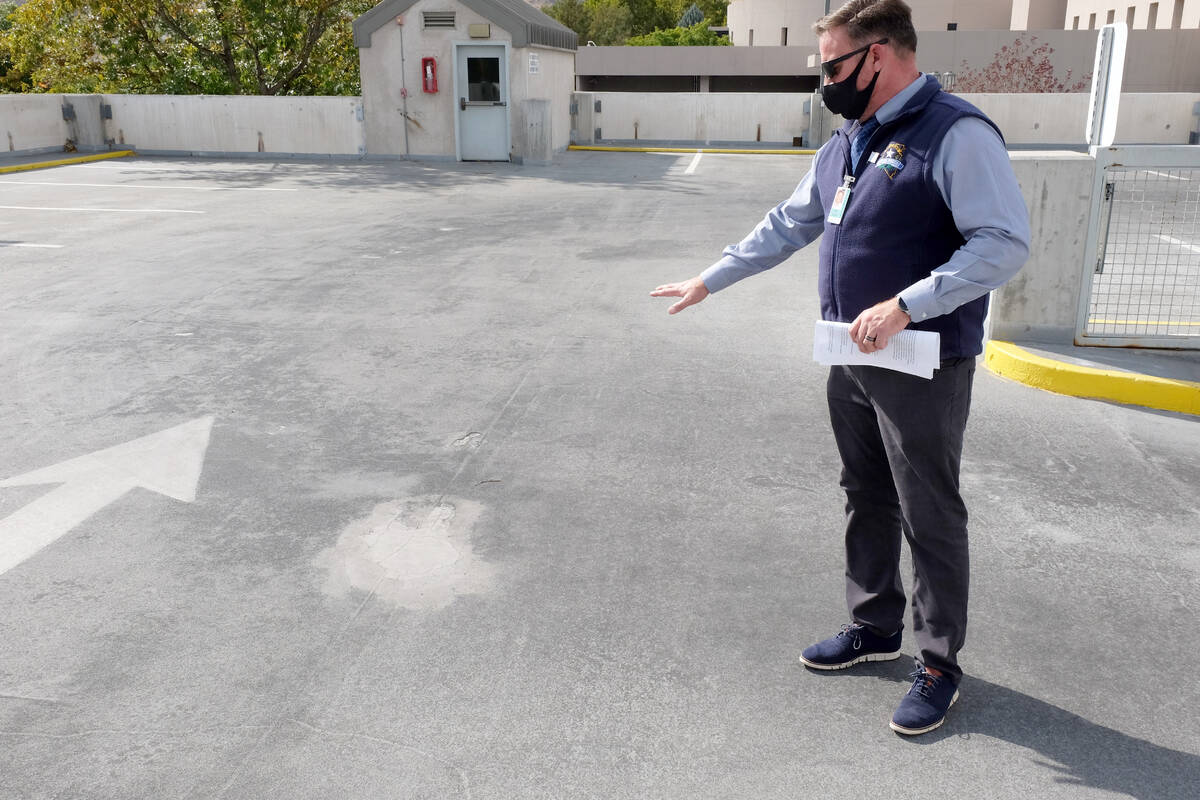 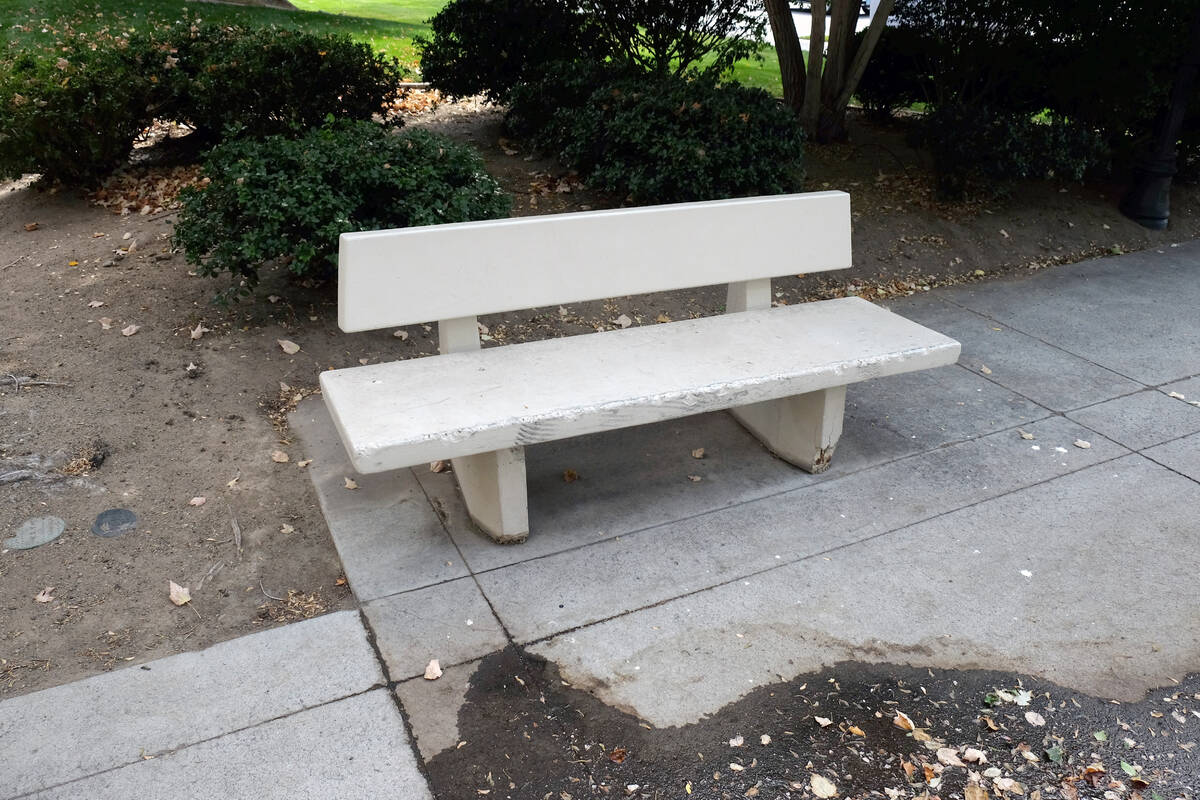 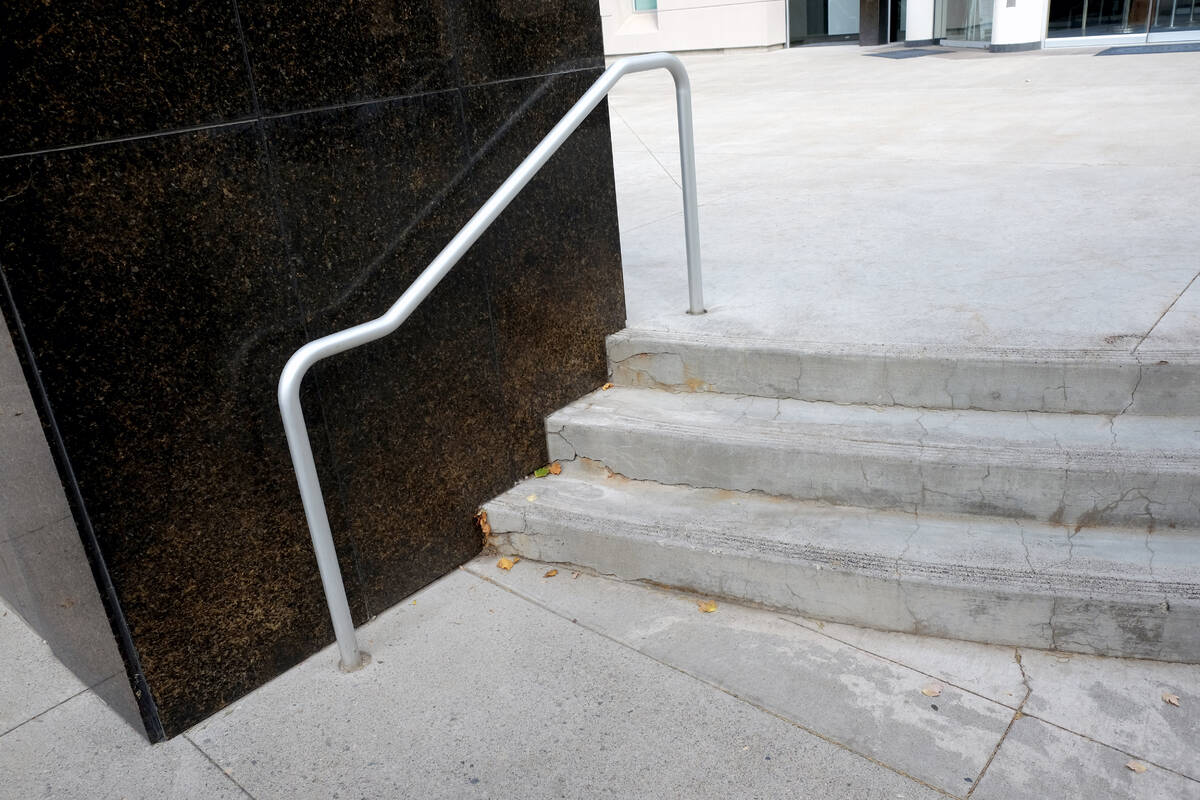 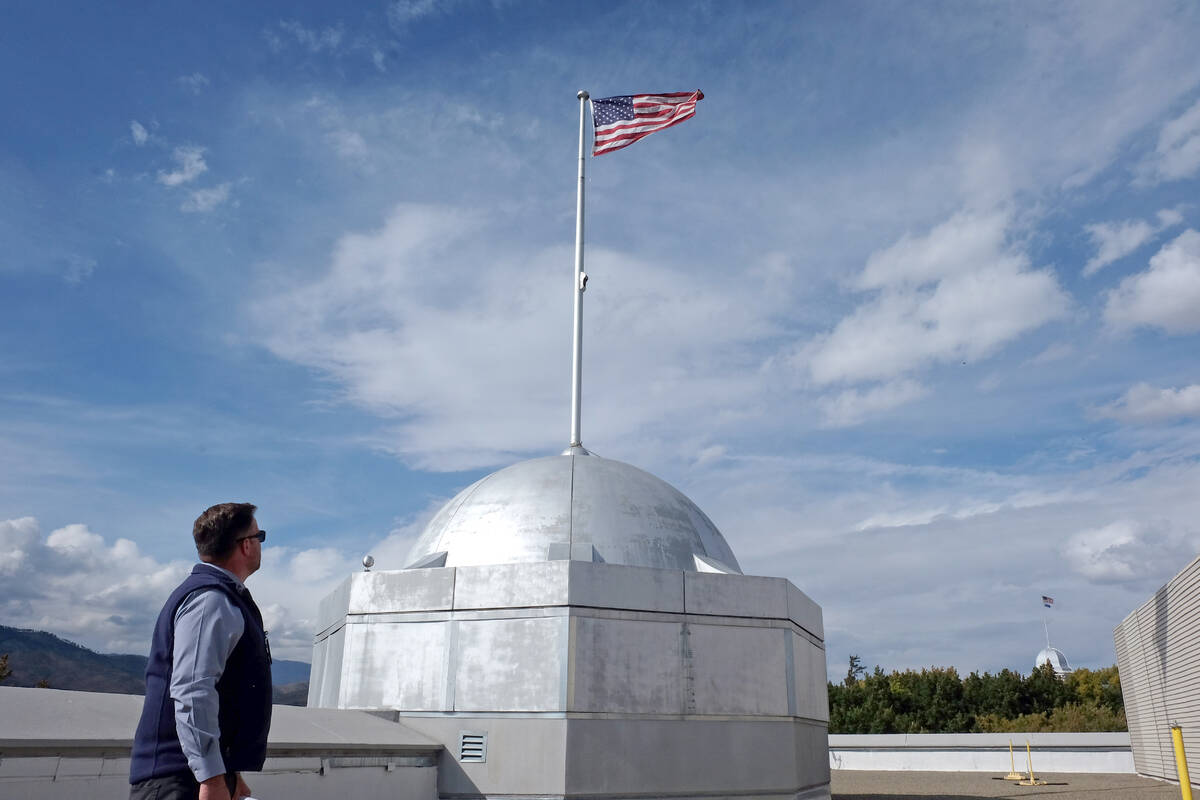 Facilities manager Jon Vietti looks up at the dome atop the legislative building in Carson City. The fiberglass dome, installed when the building was renovated in the late 1990s, is covered in metallic paint and it supposed to evoke the bell-shaped podium of the adjacent Capitol. October 7, 2021. (Bill Dentzer/Las Vegas Review-Journal) 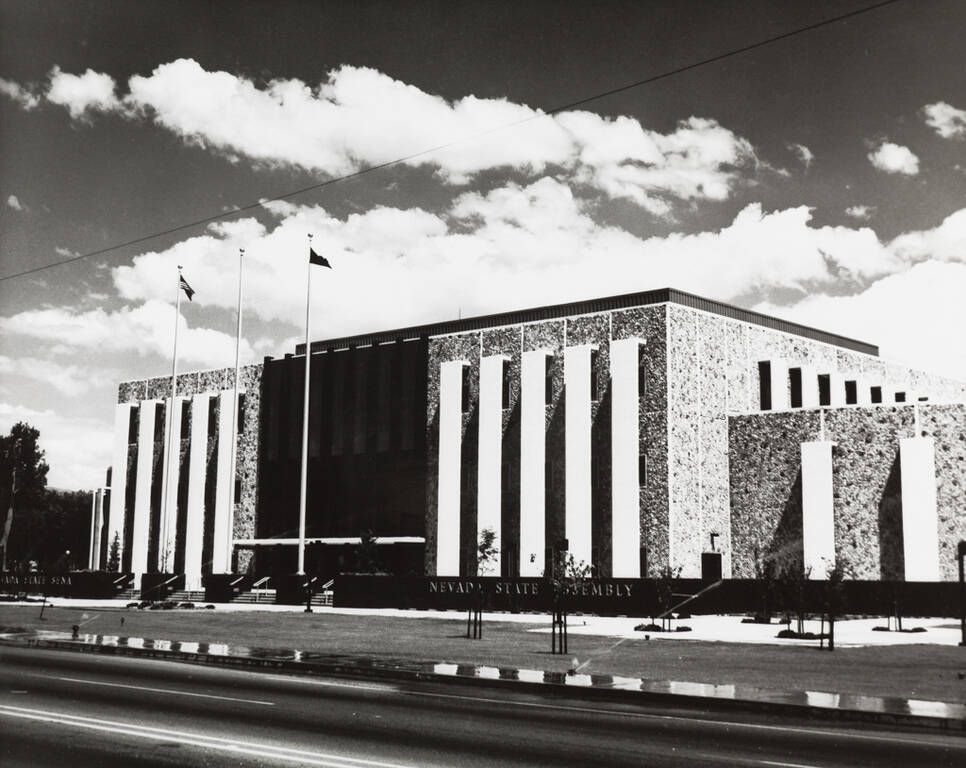 The original Legislative Building was built in 1969. It was vastly expanded and remodeled in the late 1990s. (Nevada state archives)

CARSON CITY – Democracy is crumbling in Nevada’s capital – just not the way the pundits and critics might think.

The 180,000-square-foot legislative building, housing legislative offices, Senate and Assembly chambers and committee rooms, and Legislative Counsel Bureau staff, is showing its age, with antiquated systems and structures needing replacement or upgrades. Over the next two years, more than $15 million will be spent on fixes.

Built in 1969, the building underwent a significant expansion starting in 1996 that was completed after two years’ work. Originally installed systems, more than two decades old at a minimum, are at or near the end of their design life. Some are beyond it.

“There’s really a cycle in these buildings, with so much of the equipment coming right between 20-25 years of life – and you certainly don’t want to replace it early,” said Legislative Counsel Bureau Director Brenda Erdoes. “It’s just really sort of time.”

What’s broke or breaking? For starters, the roof and the building façade leak. Plastic bladders jury-rigged in ceiling spaces funnel water down into floor receptables for collection and emptying.

During the last session, a leak opened up over a leather couch in the Assembly Speaker Jason Frierson’s office.

“It’s just astounding to me,” Erdoes said, reviewing the planned work recently for a reporter with Roger Wilkerson, administration division chief, and facilities manager Jon Vietti. “In the beginning it was tarps. Now we have a little bit sounder system, but it’s crazy. You wouldn’t want to have it in your house.”

The building needs updated interior security, including new electronic key cards for some 800 doors, replacing brass keys in many cases. The system used by lawmakers to cast their votes is 30 years old, the building’s now-underpowered, V-16 diesel emergency generator is ten years older than that, and the 24-year-old rooftop coolers have about one year left on their designed lifespan.

Concrete sidewalks that criss-cross the seven-city-block grounds surrounding the building are cracked, as are granite panels on the building’s façade. So is the floor of the 90,000 square foot parking garage, which also needs resurfacing with anti-skid material.

Some thermostats in the building operate with old pneumatic controls dating from the late 1960s. Other systems run on the software equivalent of Windows 95. Exterior stucco is crumbling; laminated countertops in committee rooms are chipped and peeling; the last 30 analog security cameras, of some 126 total, are getting digital replacements; and electronic media systems for streaming meetings and materials over the internet, challenged by the distancing and remote work requirements of the COVID pandemic, need to be updated.

The biggest single ticket item: A new more secure east entry at the rear, extending out from the central structure, where visitors and their belongings will be screened to reduce risk to the main building in case of a bomb or similar threat.

The total price tag for the work, to be completed before the 2023 session: just more than $15 million. The outlays were approved at the end of the 2021 session. The biggest ticket items, in order: new security entry, which includes ADA-compliance retrofitting, at $3.1 million; concrete work at $2.26 million, a new roof at $2 million; interior security upgrades at $1.75 million, and a resurfaced garage at $1.1 million.

Unlike government buildings designed and constructed in earlier, more grandiose eras, the cost-conscious legislative building hardly rates as a monument to ennobled public architecture. Before it was built, legislators met in the state Capitol next door, which dates to 1870.

The original 1969 building looked like a fortress, with a heavy aggregate stone façade and shielded windows that “created an intended expression of aloofness,” an architectural historian has written in a latter-day appraisal, designed and erected “when public officials in Nevada feared riots.”

The late-90s renovation was “not felicitous” and “a move reminiscent of casino makeovers in Las Vegas,” the critic wrote. That remodeling included a new dome over the front entrance, meant to evoke similar structures atop the nearby Capitol and Supreme Court building.

But the “disproportionately small” dome that was “stuck awkwardly on the front of the building,” in the historian’s appraisal, looks nothing like its bell-shaped predecessors. A more fitting replacement dome is planned, though not part of the latest project.

Work to be bid

Almost all the work will be bid to outside contractors, and none of it could pass for extravagant or a splurge. The showiest project is replacing cracked granite on sections of the building’s façade, a $480,000 job.

“We are a little bit restricted from the market of contractors right now,” Vietti said, noting COVID’s impacts on the construction market and supply chains. “Everything’s very expensive and most of the contractors that I know, if they could to hire 20 people tomorrow they would.”

Contractors, however, want to be part of the project, he said.

“They really want to help out,” Vietti said. “They’re all very excited to work with us and be part of the Capitol complex and the legislature.”

— Microsoft Office 365 implementation throughout the building: $166,000