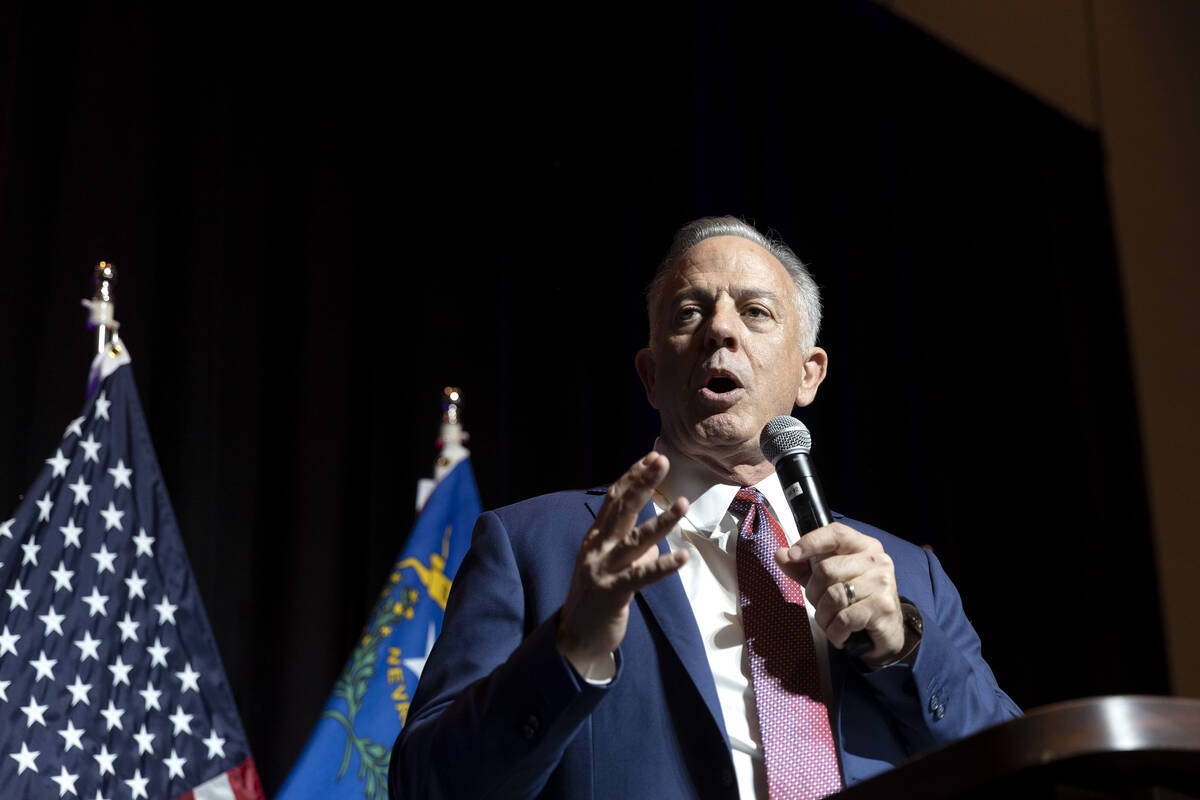 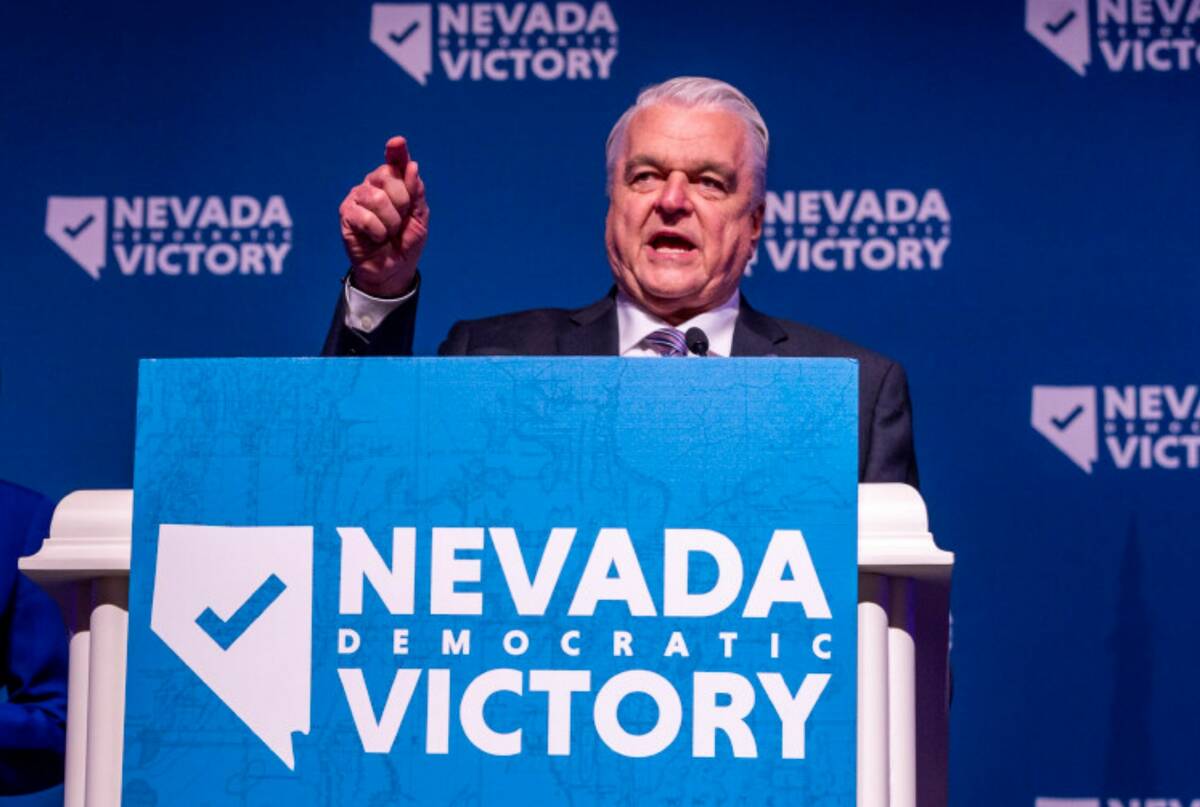 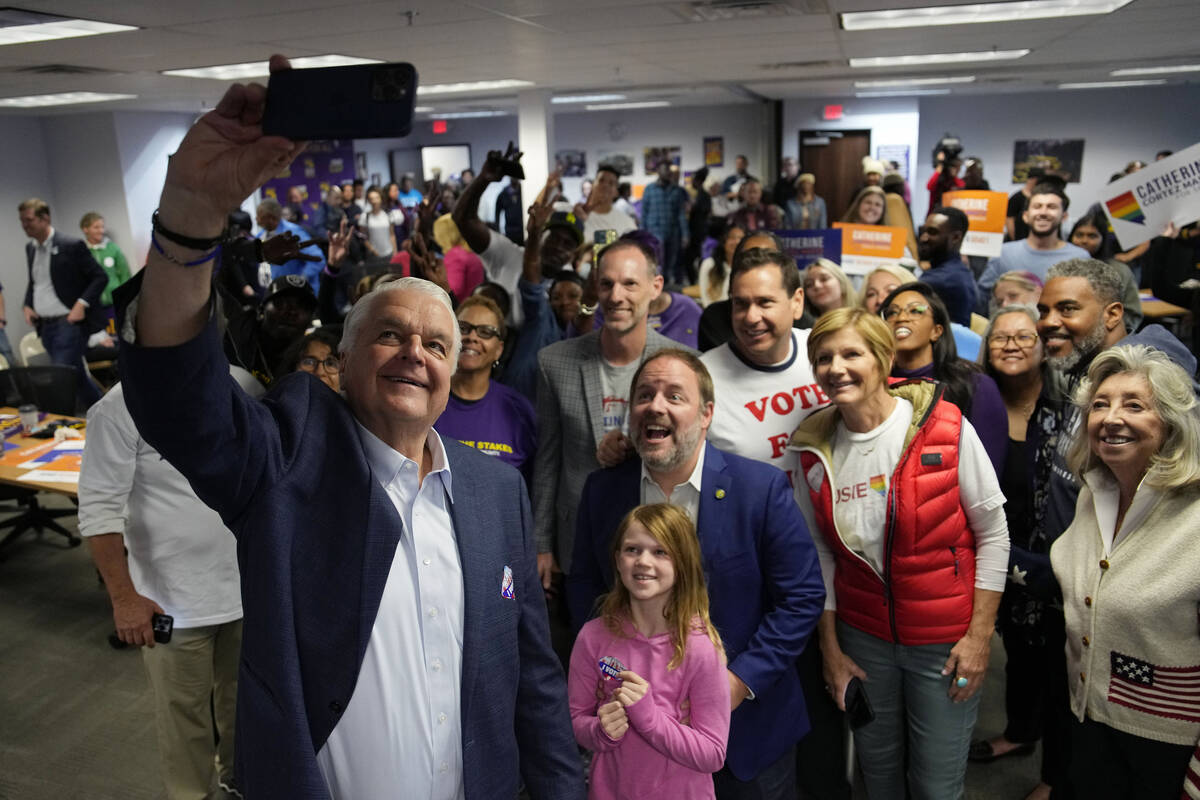 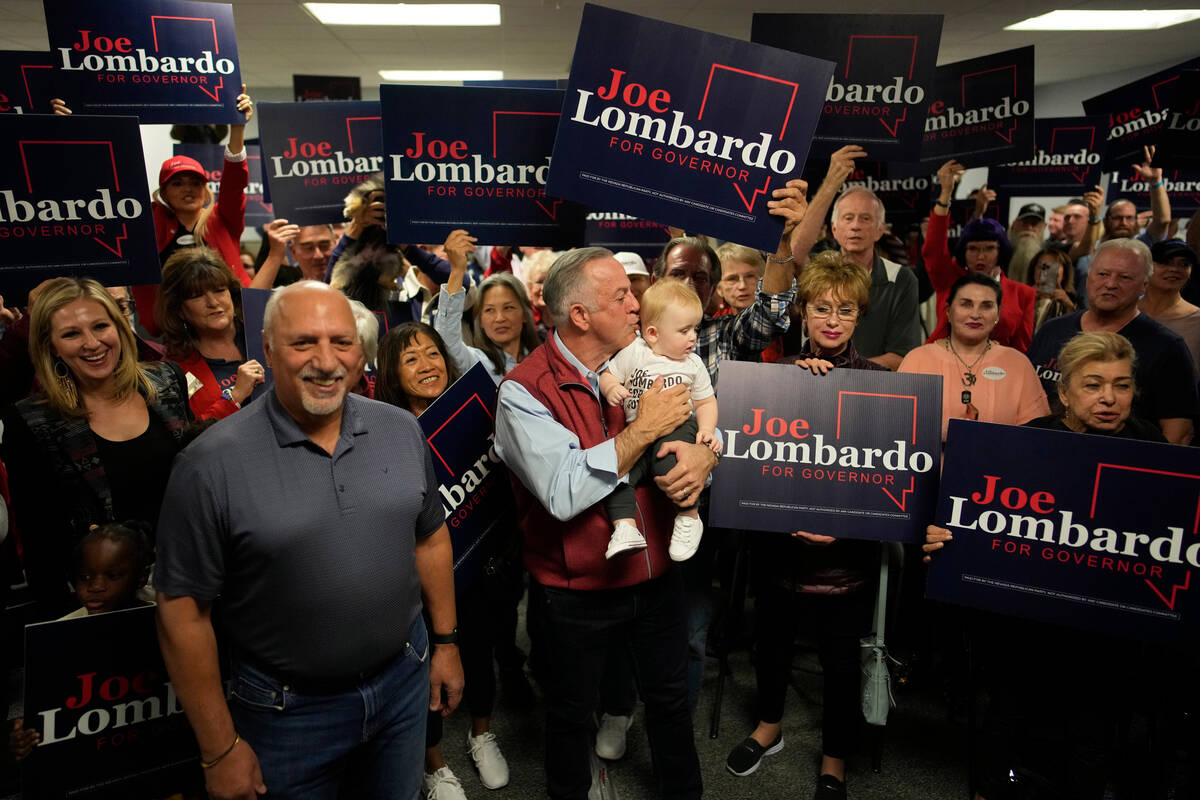 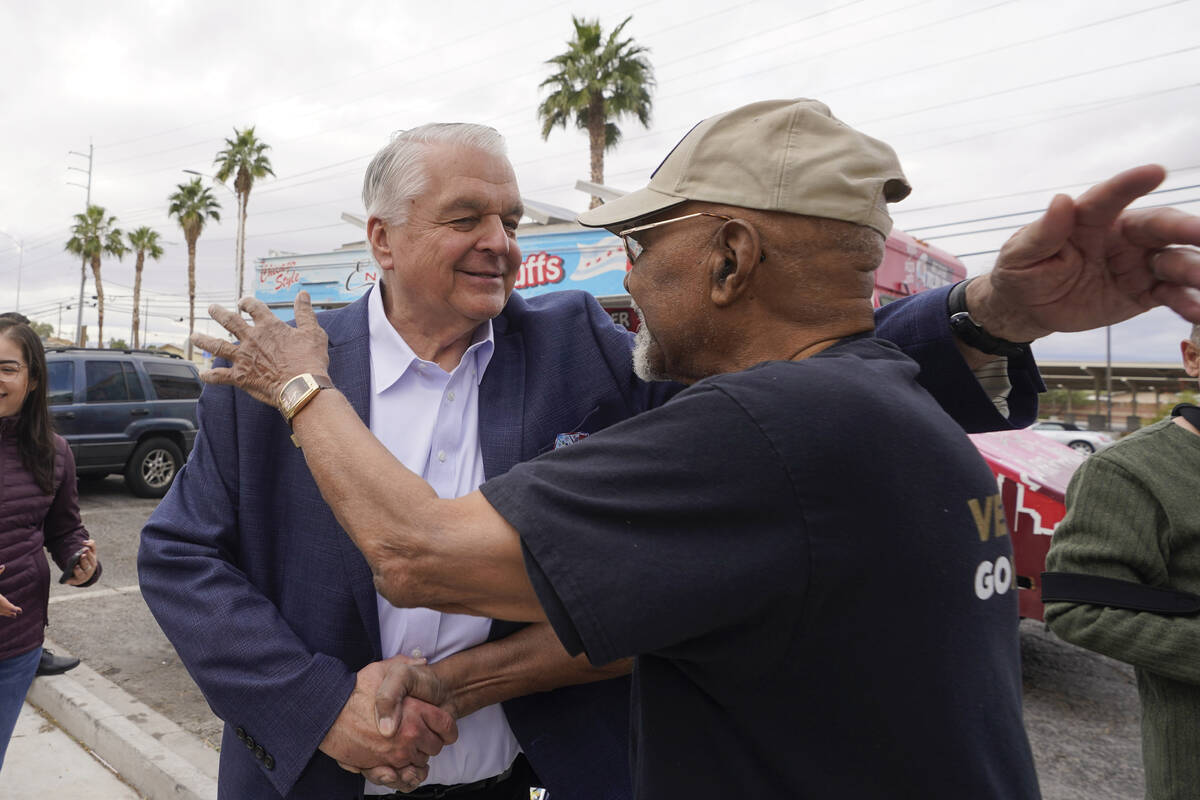 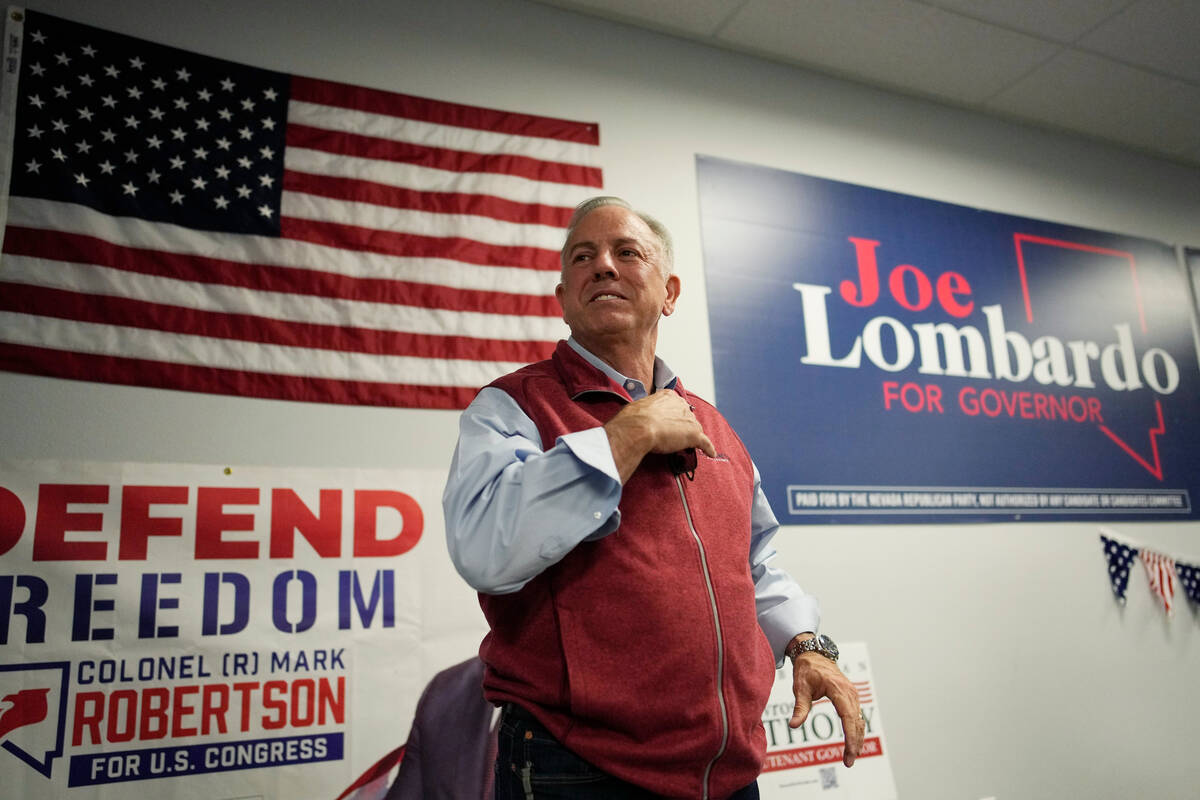 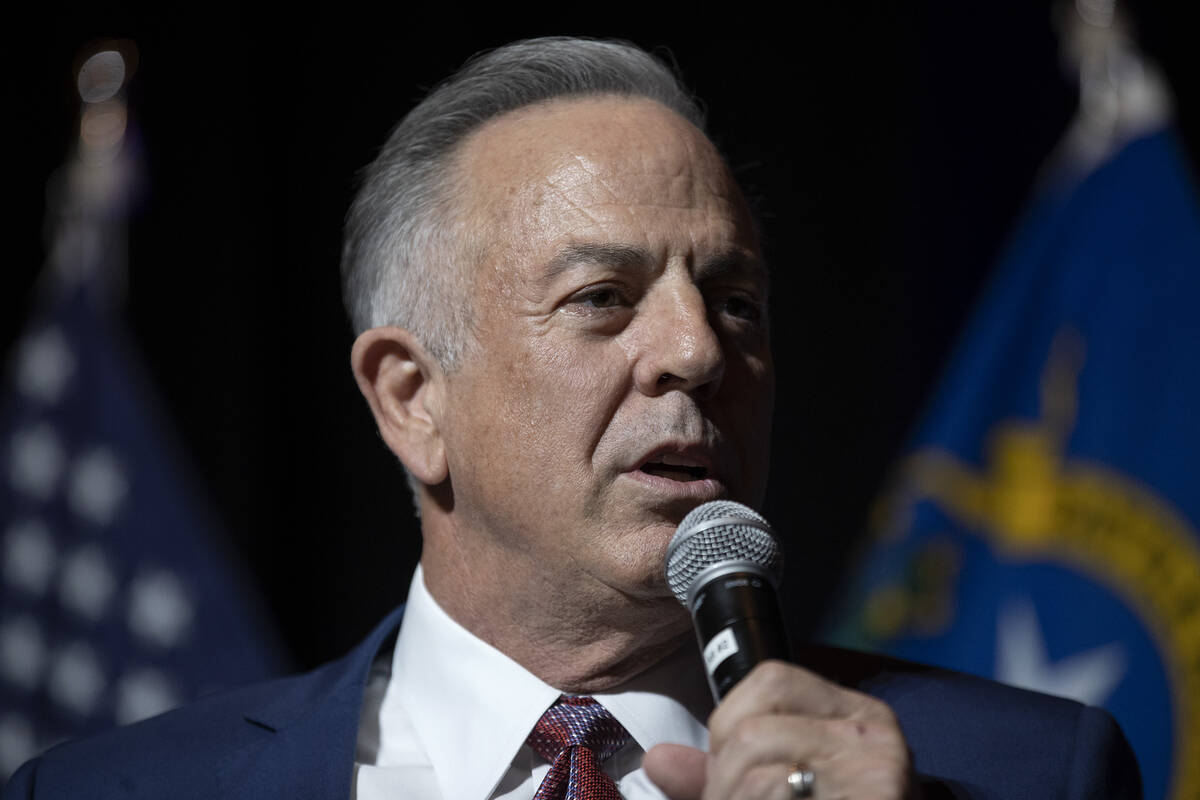 Democratic Gov. Steve Sisolak was trailing Republican Joe Lombardo by just more than 4 percentage points in the race for Nevada governor, according to results released by the election officials late Wednesday.

As of 6 p.m. Wednesday, Lombardo was leading 50.3 percent to Sisolak’s 46.1 percent. Those results include the early and Election Day in-person voting, as well as a portion of the mail ballots received. The results are still preliminary and are likely to shift over the coming days as a substantial amount of mail ballots, which have heavily favored Democrats in Nevada, continue to be counted across the state.

After a batch of about 14,000 ballots were tabulated in Clark County Wednesday evening, there are roughly 131,000 mail ballots left to count in Nevada’s two most urban counties, Clark and Washoe, ballots that could significantly narrow the gap between Lombardo and Sisolak.

“We knew it was going to be a close election, and that’s exactly what we got,” Sisolak told the crowd at the Democrats’ watch party inside the Encore Tuesday evening. “Hang in there everybody. Be patient. We need to make sure every single vote is counted and when that job is done, I believe we’re going to win this thing.”

Lombardo, two-term sheriff of Nevada’s most populous county, and Sisolak, the incumbent Democratic governor vying for a second term, have been locked in an extremely tight race since Lombardo emerged from a crowded Republican primary in June.

Polling has shown the race to be essentially a toss-up nearly the entire election cycle, with the most recent showing a very slight tilt in Lombardo’s favor but still within the margin of error.

Sisolak, 68, who was Nevada’s first Democratic governor in nearly two decades, spent more than 20 years in elected office in Nevada. His first four years as governor have been largely overshadowed by the COVID-19 pandemic, which first gripped the Silver State 15 months into Sisolak’s term. His response to the pandemic and especially his decision to shutter businesses as the outbreak spread became one of the Republicans’ main campaign attacks throughout the election cycle.

Sisolak has said he’s hoping for four more years to address the issues that were forced to take a backseat to the pandemic response, especially his plans for improving education and diversifying Nevada’s economy.

Lombardo, 62, is hoping to make the unconventional leap from county sheriff to governor of the state, a run he has said was spurred because he thought he could better manage the state in the wake of Sisolak’s COVID-19 response.

Lombardo appeared at the end of the Stronger Nevada Political Action Committee’s Republican post-election party to tell the attendees that the counts aren’t conclusive yet, but he remained optimistic.

The race has been largely defined by a handful of key issues, namely inflation, abortion rights and crime, with Lombardo and Republicans railing against Sisolak on rising costs and gas prices.

After the Supreme Court overturned Roe v. Wade and left abortion rights to individual states, Lombardo’s stance — and stumbles — on the topic became a prime target for Sisolak and Democrats as they hoped to highlight the sheriff’s anti-abortion comments in a state that overwhelmingly voted to protect a woman’s right to have the procedure more than 30 years ago.

On the trail, Lombardo has promised to repeal what he calls “soft on crime” legislation that Democrats have passed under Sisolak, specifically a 2019 criminal justice reform bill that sought to reduce the rate at which people return to prison that passed with bipartisan support.

From a fundraising perspective, Sisolak was able to significantly outraise and outspend Lombardo, carrying a massive war chest into the general election that allowed him to pump $12.8 million into the campaign from July 1 to Sept. 30. That dwarfed the $1.8 million Lombardo was able to spend in that same period, in large part because the sheriff was forced to spend far more than anticipated to fend off the plethora of primary challengers.

Lombardo emerged from a 15-person Republican primary that saw him beat Reno attorney Joey Gilbert by just 11 points in a race that proved closer than most would have anticipated. Gilbert had generated significant grassroots support among the Republican Party base thanks largely to his pro-Trump, anti-COVID restriction and election denier stances.

But the fight over those primary results spilled over well into the general election, as Gilbert refused to concede the race and sued Lombardo and several officials across the state over the election results, claiming that an “illegal geometric formula” altered the votes that were counted. Gilbert lost that action and was later sanctioned for filing a frivolous lawsuit and forced to pay Lombardo’s legal fees. It wasn’t until early October that Gilbert announced that he was supporting Lombardo in the race.

Attendees of the Stronger Nevada Political Action Committee’s Republican election night party were optimistic of their party’s chances in this election before votes were counted.

Joe Garin, 59, took issue with the handling of the 2020 lockdown. “I personally felt betrayed and attacked that Gov. Sisolak decided to close churches but keep weed and liquor open,” said Garin.

Garin was at the event with his wife, Monica, 48, and their 12-year-old daughter, Alexa.

“She’s the youngest person here. But she expressed interest and I thought, ‘You know what? This is kind of cool for her to see something like this,’” Garin said.

At the Democratic watch party at the Encore, 68-year-old Shirley Brice said that while she is “actually a nonpartisan,” she has been volunteering for Democrats and voted a straight Democratic ticket this year over fears that election deniers such as Republican secretary of state candidate Jim Marchant could take office.

She said she’s hoping the Democrats come out on top but is concerned as Nevada is a battleground state.

“I think Sisolak has done a good job. He kept us safe during the pandemic, and we’re gangbusters now,” Brice said.