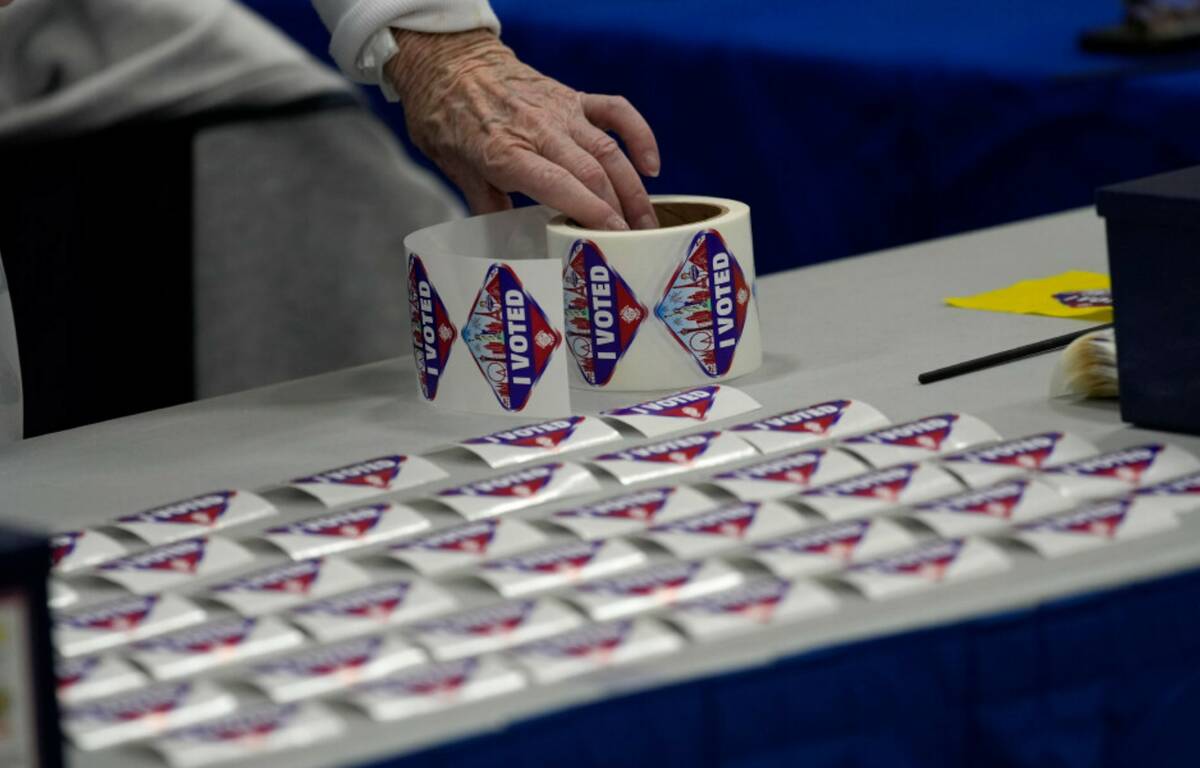 A poll worker lays out I Voted stickers at a polling place Tuesday, Nov. 8, 2022, in Las Vegas. (AP Photo/John Locher) 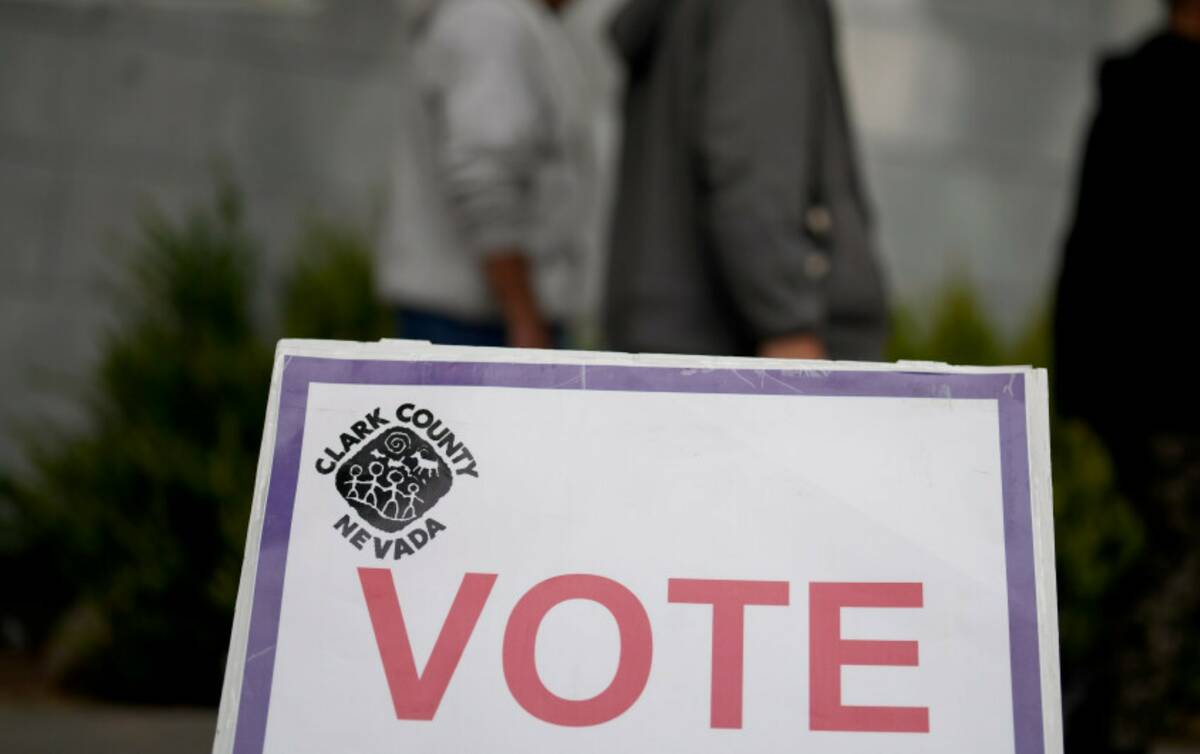 Nevada’s Democrats want the Silver State to be the first in the nation to pick the party’s 2024 presidential nominee.

And they may find out this week: National Democrats are meeting starting Thursday to work out the 2024 calendar.

While Republicans are sticking with the traditional schedule so far, both parties could have to maneuver around Nevada’s new presidential primary election laws.

Multiple states are vying to kick New Hampshire out of first place in Democratic presidential primary process. The Democratic National Committee’s Rules and Bylaws Committee will decide this week a new early states window for the primary calendar and which state will go first. (While New Hampshire holds the nation’s first primary, Iowa has traditionally held the first contest for presidential nominees in the form of a caucus.)

Since then, Nevada’s Democrat-controlled Legislature has worked to appeal to the DNC as an early state.

In the last legislative session, lawmakers did away with the state’s caucus system, and instead directed both Democratic and Republican parties to hold their respective presidential primary elections on the first Tuesday of February 2024, except if only one qualified candidate of the major political party files a declaration of candidacy.

If that happens, then the secretary of state must certify the name of the lone qualified candidate to the state central committee and the national committee of the major political party, according to state law. The winners of the primaries will receive a certain number of delegates, who will then cast votes for them at their party’s national convention.

Nevada Democrats argue the state is the perfect choice to go first because it reflects the Democratic Party through its racial and economic diversity, in contrast to New Hampshire and Iowa, which are 90.1 percent white and 92.8 percent white compared to Nevada’s 72.8 percent, according to census data.

The Democratic federal delegation for Nevada — made up of two senators and three U.S. representatives — also argue that Nevada played a key role in securing the party its majority in the U.S. Senate through Sen. Catherine Cortez Masto’s narrow victory.

“Nevada has cemented the argument for why we should hold the first presidential primary,” the Nevada Democratic congressional delegation said in a statement. “Nevada is a working class, pro-labor state with one of the most diverse populations in the country and a commitment to voting rights that is a model for the nation.”

Why does Nevada want to be first?

Being first in the nation would give Nevada a disproportionate amount of influence in the race and set the tone for the campaign, said Dan Lee, an associate professor of political science at UNLV.

Nevada would get more attention from the presidential candidates, see more advertising and organizing dollars spent here and the state’s voters would have more of an impact on who ends up being the nominee. If a state holds a primary later in the process, more candidates will have dropped out and voters will have fewer options.

There are also policy advantages to being first in the nation. Nevada Democrats are pushing to be first for the state’s large Latino population, which would force candidates to appeal to Latino voters and talk about issues important to them and make policy proposals that resonate with them, Lee said.

Nevada also represents the West and issues that are important to Western states, such as the water shortage and immigration reform, said Molly Forgey, a former staffer to Reid and Gov. Steve Sisolak who is working to make Nevada first in the nation.

If Nevada is first in the nation, Nevadans would get to hear directly from the candidates about the issues that are important to them and Western states, Forgey said.

The ‘wrinkle’ in Nevada’s plans

While Nevada Democrats want to go first in the primary process, it took about a week to count all of the mail-in ballots in the 2022 midterms, which is the “big wrinkle” in all of this, Lee said. Other states vying to be first argue that states should produce election results on the night of the election. That’s especially true with the eyes of the entire nation watching for results, and candidates who need to move on to campaign in other early states.

Nevada allows for completed ballots to be postmarked on Election Day, and received up to four days after the election, and still be counted. Democrats in the Nevada Legislature pushed for this change to make voting as accessible and inclusive as possible, Lee said.

Nevada Democrats can argue that the state’s process is slow because it is inclusive, a quality the DNC looks for, Lee said.

The DNC could allow Nevada to be first in the presidential primary, with the condition that its Legislature change the election laws and put an earlier deadline on when mail ballots can be accepted, Lee said.

But that could force Nevada’s Democrats to renege on their goals of accessibility and inclusion, he added.

“It’s almost like they’d have to backtrack on it,” Lee said.

Democrats no longer have a supermajority in Nevada state government. Republican Gov.-elect Joe Lombardo will have some say, and he could veto those changes, Lee said. But Lombardo does not have an incentive to roadblock Democrats from making changes to the primary election law to be an early or the first state, Lee said.

Going early would give Nevada more influence in the Republican nomination, too, Lee said, and changes to mail ballot deadlines are in line with Republicans’ desire for restrictions on voting by mail.

In negotiations with the Democratic Legislature, Lombardo might try to push the changes further, such as eliminating ballot collection, or what is also known as “ballot harvesting.”

What about the Republicans?

The Nevada Republican Party is not looking to “upset the applecart” in the long set order of early states — Iowa, New Hampshire, Nevada and South Carolina — said party Chairman Michael McDonald. The Republican National Committee is so far sticking with that order of states as well.

“From our stance, we’re taking a very different approach this time in the election cycle,” McDonald said.

The Republican National Convention will hold its 2024 convention in Milwaukee, although the date has yet to be announced. Former President Donald Trump is the only Republican to have formally announced his candidacy, although a slew of other Republicans will potentially compete against him.

Nevada’s early February presidential primary date could throw a wrench in parties’ plans, and it could require some maneuvering.

“It’s this weird dance between the parties and state laws that ultimately sets what the calendar is. There’s constraints on both sides. The national parties want a certain calendar but at the same time it depends on what the parties can do in various states,” Lee said.

In the past, when states have gone against the parties’ wishes and held presidential primaries early, they’ve been threatened with penalties including refusal to seat all or some of a state’s delegates, Lee said. That was the case with Michigan and Florida in 2008, he said.

If the DNC decides to go another route, it will work with Nevada Democrats and the state that it chose to be first to iron out the primary calendar dates and ensure the first-in-the-nation state actually goes first while complying with Nevada’s state law, a Nevada Democrat with knowledge of the process said.

McDonald said the party has good attorneys who will argue in court and figure out how to work around Nevada’s primary election date.

“There’s still quite a bit of uncertainty of exactly how things might play out. I think we’ll know a lot more after the DNC meets this week,” Lee said.