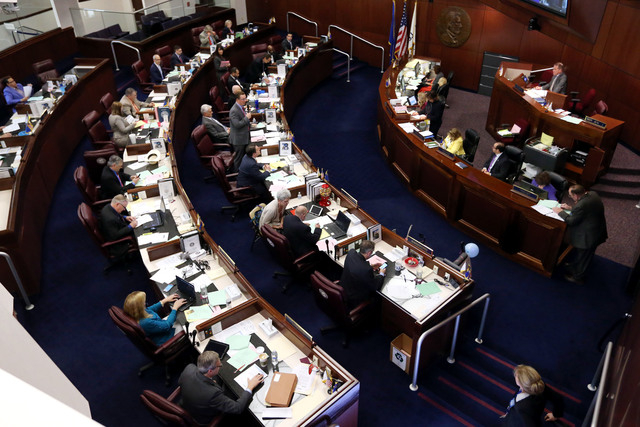 The Nevada Senate works in the final hours of the session at the Legislative Building in Carson City on Monday, June 1, 2015. (Cathleen Allison/Las Vegas Review-Journal)

NOTE: National Sunshine Week started Sunday. The American Society of Newspaper Editors in 2005 launched the first Sunshine Week, a celebration of access to public information that has been held every year since to coincide with the March 16 birthday of James Madison, father of the U.S. Constitution and a key advocate of the Bill of Rights.

LAS VEGAS — The Nevada Legislature gets to write the public records laws that compel state agencies and local governments to turn over emails and other documents upon request. But ask for the lawmakers’ own emails and documents, and you’ll hit a brick wall.

The Associated Press received a meticulously annotated, 28-page denial in response to a recent request for emails sent and received by four legislative leaders’ official accounts during the first week of February.

Lawyers with the Legislative Counsel Bureau cited a buffet of reasons, starting with: the Legislature and its staff couldn’t be considered a “governmental entity,” and emails and calendars couldn’t be defined as “public books or records” under the state’s public records law.

They also argued that giving up such records conflicts with “legislative privilege and immunity,” a principle rooted in 16th and 17th century England when British monarchs used civil and criminal proceedings to harass members of Parliament who were critical of the Crown.

According to LCB, compelling lawmakers to disclose behind-the-scenes communications would “chill legislative speech and debate because Legislators might censor their remarks or forgo them entirely to protect the privacy of their sources from being revealed.”

“It would also allow improper inquiries into the motivations of Legislators,” added LCB, which provides information and assistance to lawmakers.

Finally, LCB lawyers cited a bill that passed on the chaotic final day of the 2015 legislative session, a little over 24 hours after it was introduced at LCB’s request. The bill, AB496, clarifies that immunity applies to every action lawmakers could take “within the sphere of legitimate legislative activity,” whether in session or out, and in any form — written, oral or otherwise.

Critics called the policy overkill, and said it prevents the public from evaluating the factors influencing legislation.

“I’m appalled by the breadth of the arrogance in this response,” said Barry Smith, executive director of the Nevada Press Association, which represents the news media and advocates for transparency in government. “The extent of the reaction makes you wonder, ‘What do they have to hide?’”

While the Legislature rejected the AP’s request, the executive branch provided specific documents in response to the same query. Gov. Brian Sandoval’s office released a detailed calendar of his week that included phone calls with legislative leaders and U.S. Sen. Harry Reid, a “veteran of the month” ceremony and a private black tie dinner in Las Vegas.

Lawyers for his office pointed out a single retraction in the calendar — a flight confirmation number — and said they needed more time to meet a request for his emails.

Smith said the Legislature, which has wide latitude to make its own rules, is being hypocritical by holding others to a far higher standard of disclosure than themselves.

“It does say over and over again that we pass laws for other people to follow, not ourselves,” Smith said. “If the leadership of the Legislature actually agrees with this, I’d be very, very worried.”

Michael Schaus of the Nevada Policy Research Institute, a conservative think tank, says constituents who send representatives up to Carson City have a right to know the business happening there. While voters can find videos of legislative meetings and copies of bills on the Legislature’s robust website, the more subtle backstory remains out of reach for most.

Without access to emails, calendars and other correspondence, constituents often don’t know why bills died, which lobbyists their representatives are spending the most time with and what bargains lawmakers cut to save certain bills and kill others. They can only find out if the lawmakers themselves voluntarily give up the information.

Tod Story, executive director of the American Civil Liberties Union of Nevada, said he understands that lawmakers need some freedom to speak candidly about legislative matters. But he said their confidentiality protections need to be reined in.

“The exemption they have now is far too broad,” Story said. “Certainly anything in the direction of transparency would be welcome.”