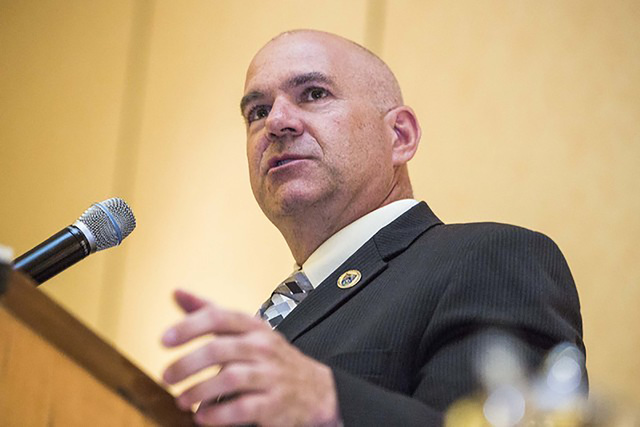 Confronted by another year of rising overtime costs, Nevada’s top prison official axed a decades-old policy that required two officers to accompany prisoners to the doctor — a move expected to save $3.5 million in six months.

The overtime trend isn’t new for the Nevada Department of Corrections: Overtime costs for state correctional officers have skyrocketed 34 percent in the last two years, a recent audit revealed. The state paid $15.5 million in overtime costs in fiscal 2017 and $12.5 million the prior year.

Nevada prison officials say transporting prisoners to doctor appointments and to the hospital are to blame. The former policy required two correctional officers to accompany each inmate — and to stay with them the entire time, including overnight hospital stays.

“We’re not budgeted for watching inmates in the hospital,” said James Dzurenda, director of the Nevada Department of Corrections. “So when they stay overnight or get admitted, every single minute is overtime. You have someone who comes in for a DUI case that gets 13 months in prison, and we’re sending him to the hospital because he’s having a problem with his liver. He’s in there for five days. When you multiply that by two officers for each shift, that’s a lot of money.”

The new policy requires only one correctional officer per inmate and one officer to provide “relief” as needed — in case an inmate must be moved or taken out of restraints. If there are four inmates at the hospital, for example, five correctional officers would need to be there.

Inmates are taken to outside doctors and hospitals when the state prisons don’t have the resources in-house.

Dzurenda said inmates’ overnight hospital stays have tripled from two years ago. He’s not sure why.

Gene Columbus, a retired corrections officer and president of the Nevada Corrections Association, said soaring overtime costs aren’t solely because of the surge in hospital visits. He blames administrators for improperly scheduling officers and mismanaging resources — and, he said, they “should be held accountable.”

He said Dzurenda’s policy of assigning one officer per inmate is used in other counties and could work if officers are trained properly.

Dzurenda said three of seven state facilities have 24-hour medical staff — Northern Nevada, High Desert and Florence McClure Women’s Correctional Center. The rest have “nursing care,” and inmates are often sent out to see a specialist or a doctor during off-hours.

“Just as medical resources in the community available to the public are scarce, NDOC also has limitations on the level of care it can provide to inmates,” said John Borrowman, the department’s deputy director of support services.

Dzurenda said that prison is also difficult to staff because of its location. But the audit, ordered by Gov. Brian Sandoval’s office, found no direct correlation between prison vacancies and overtime costs.

The audit also found the department can cut costs by scheduling overtime based on actual hours worked, encouraging officers to volunteer for overtime and reassessing staffing levels.