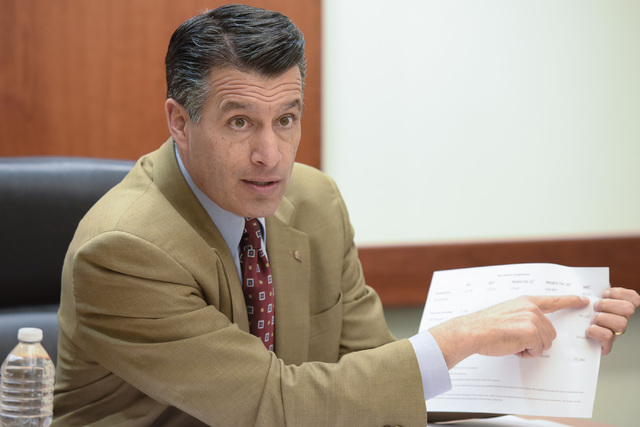 Gov. Brian Sandoval speaks to the Review-Journal editorial board on Friday, Jan. 30, 2015, about his plan to raise taxes to bring in more money for education. (Mark Damon/Las Vegas Review-Journal file)

A majority of likely Nevada voters back Gov. Brian Sandoval’s plan to raise taxes to bring in more money for education, with 56 percent backing his proposed higher business license fee and 41 percent opposing the idea, according to a new poll released Monday.

Although the main component of the Republican governor’s total $1.1 billion tax package is favored by more state residents, a majority of GOP voters still oppose his plan: or 54 percent compared to 43 percent who back a higher business license fee. Among Democratic voters, approval was very strong: 67 percent of those surveyed liked the plan compared to 31 percent who opposed it.

Sandoval said he plans to personally present his detailed tax plan to the Senate Committee on Revenue and Economic Development next Tuesday. Normally, administration officials present the governor’s budget, but Sandoval wants to make a face-to-face case to boost education funding.

The governor said he has looked at other tax hike proposals, including doubling the payroll tax and expanding sales taxes on services, and determines his proposal to boost the annual business license fee to raise $250 million is the best option for big and small companies.

“This proposal is the broadest, it’s the fairest and it is the simplest,” Sandoval said during a Monday evening appearance on “Ralston Live,” a public affairs program shown on Vegas PBS Channel 10 and KNPB in Reno.

The poll of 500 likely registered voters was conducted Feb. 21-23 by the Tarrance Group and commissioned by Nevada Can Do Better, Inc., a new political entity promoting Sandoval’s agenda. The telephone survey had a margin of error of plus or minus 4.5 percentage points.

Release of the poll comes a month into the 2015 legislative session as lawmakers review the governor’s proposed $7.3 billion spending plan for the next biennium and review whether to approve all, some or none of his tax and education reform proposals.

Now, the business license fee is a flat $200. Sandoval has proposed increasing the fee and imposing it on a graduated level based on a company’s gross annual revenues. The fee would range from $400 for small businesses to more than $4 million for the largest corporations.

Tax proposals need a two-thirds super-majority approval to pass both houses of the Legislature. The GOP holds a slim 11-10 seat majority in the Senate and a 25-17 seat majority in the Assembly. But at least half a dozen Republicans in the Assembly have signed pledges not to raise taxes and so the outcome of Sandoval’s tax hike proposals is uncertain.

The poll showed that Sandoval, who was re-elected in a landslide in 2014, has plenty of political capital to burn in pressing his agenda. Some 75 percent of those surveyed said they have a favorable view of the Republican governor and 17 percent unfavorable.

Those surveyed also were asked about several other revenue-raising ideas. About 57 percent opposed expanding sales taxes to services such as haircuts, with 40 percent in support. Half of voters, or 50 percent, still oppose the services tax idea even if it comes with a commensurate drop in the overall sales tax rate, although 41 percent backed such a proposal.

Most voters, or 73 percent, opposed doubling the payroll tax rate and expanding it to all businesses, with only 20 percent in favor of the idea. The modified business tax now is 1.17 percent for most businesses, although 2 percent for financial institutions.

On a few other hot-button issues, voters polled sided with Republicans in the Legislature. Some 47 percent backed reforming the construction defect law to better define flaws and to cut out automatic attorneys’ fees, with 37 percent opposed and 17 percent unsure.

A majority, or 56 percent, favored exempting school construction projects from the prevailing wage law, which can raise the cost of building, with 36 percent opposed and 8 percent unsure.

About two-thirds, or 63 percent, backed reforming the Public Employees Retirement System to make it a defined contribution scheme for new employees — as opposed to a defined benefit plan for existing workers — with 28 percent opposed and 9 percent unsure.