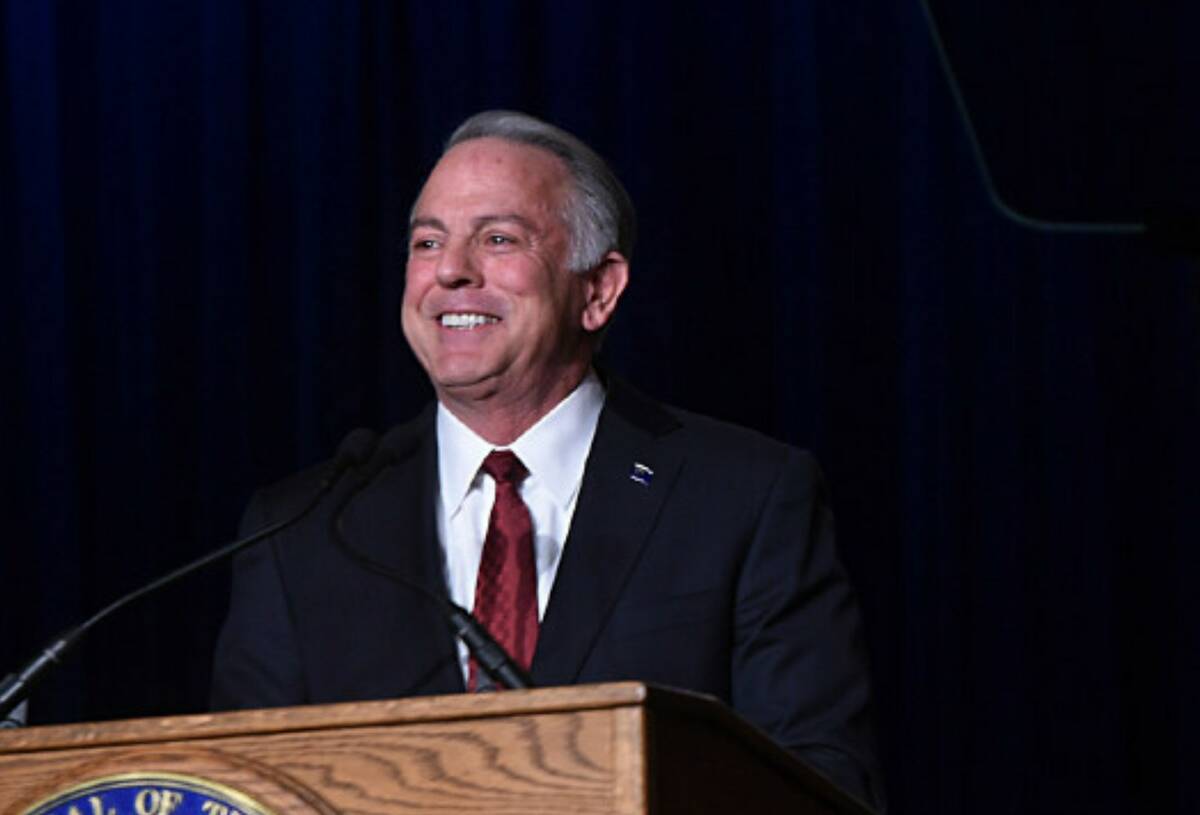 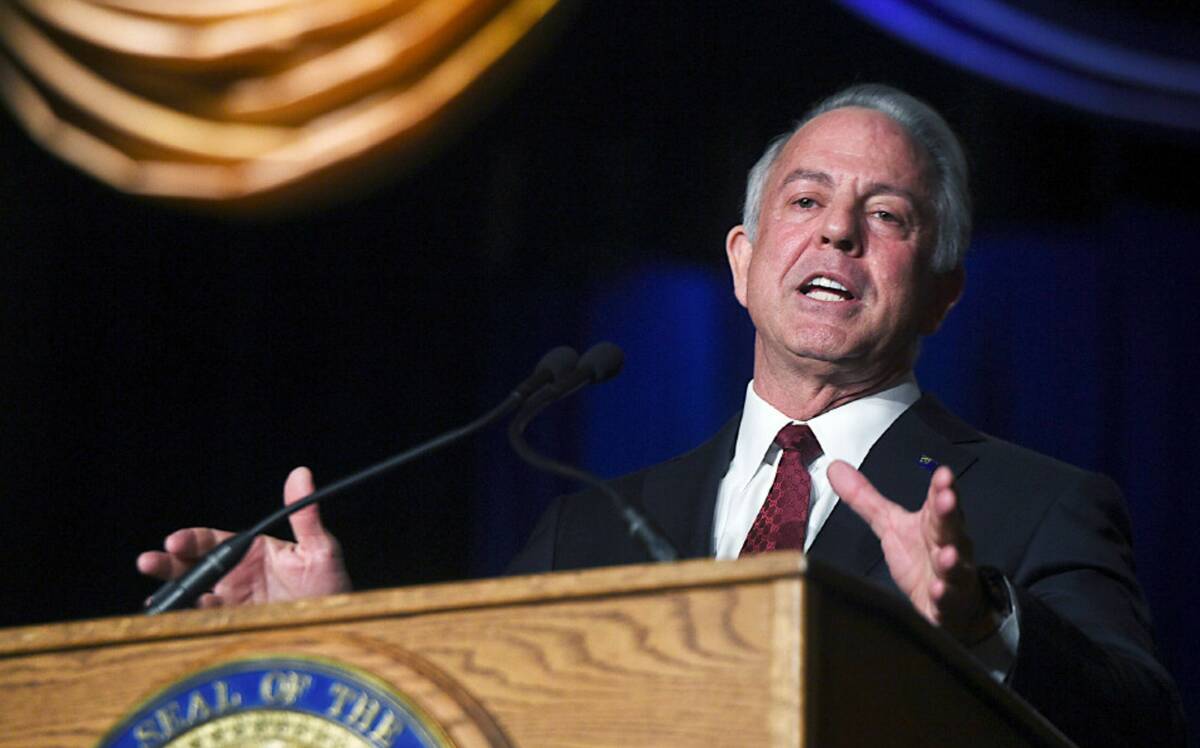 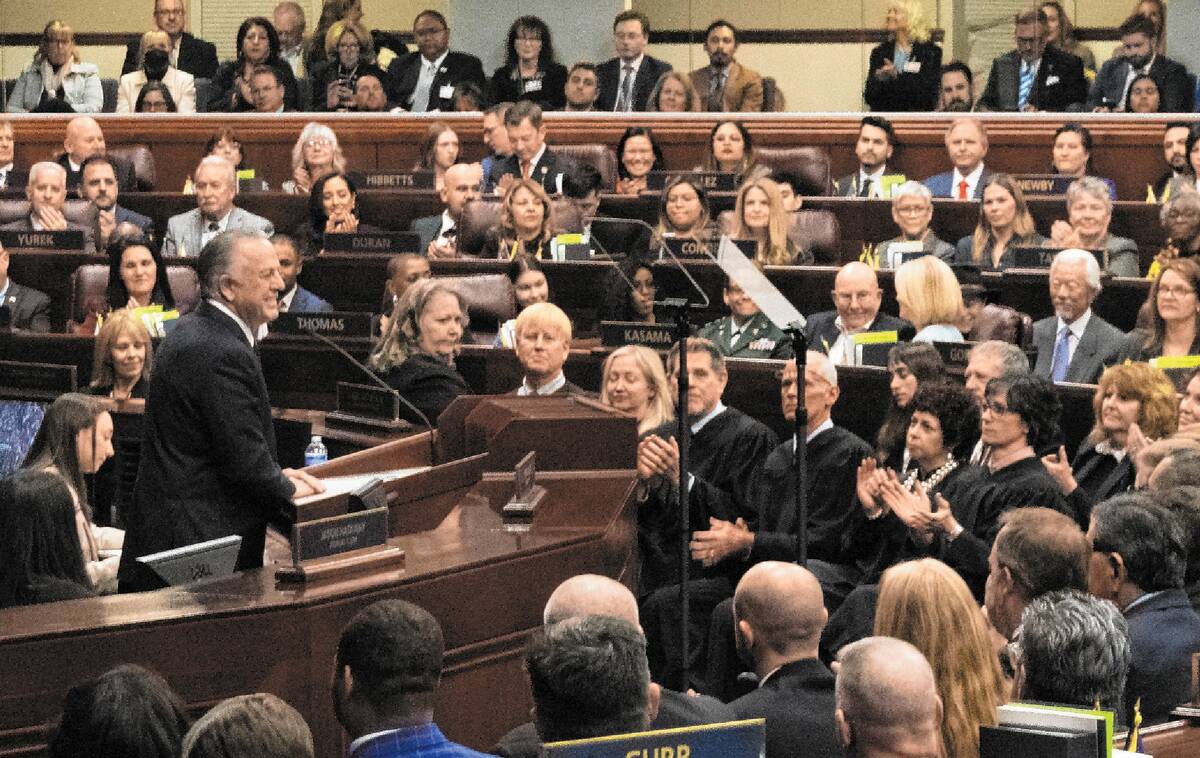 CARSON CITY — Gov. Joe Lombardo touted fiscal responsibility during his first State of the State speech Monday, proposing a cut to the gas tax, increased funding for K-12 education and a cost of living increase for state employees.

Lombardo shared his budget and other legislative priorities during the speech, which was held in the packed Assembly chambers.

“My executive budget not only lowers the tax burden on working families and businesses, but it also reserves more than $1 in savings for every new dollar in general fund spending,” Lombardo said.

The governor proposed several measures meant to ease inflation, including suspending the gas tax for the next year. The plan, which would save consumers $250 million, would be paid for by using general fund revenue.

The governor also proposed a number of measures meant to ease inflation’s burdens on businesses, including decreasing the modified business tax rate to 1.17 percent and raising the threshold for businesses subject to the Commerce Tax from $4 million to $6 million.

The budget also includes the proposed creation of the Nevada Way Fund, a savings account intended for infrastructure projects and economic development projects that could be awarded by a board made up by the governor and the four legislative leaders.

Lombardo also proposed increasing the cap for the Rainy Day Fund from 20 percent to 30 percent.

The governor focused a large portion of his remarks on schools, proposing a $2 billion increase in funding for K-12 education over the biennium.

Lombardo vowed to create the Office of School Choice within the Department of Education “to ensure students and their parents have the information they need to evaluate every available option and that all education providers are held to similar standards,” he said.

The governor also took aim at a large criminal justice reform bill passed in 2019 that was championed by Speaker-designate Steve Yeager, D-Las Vegas.

“Three years have gone by, and we can clearly see that some of those changes didn’t produce the outcomes some were predicting. In fact, they made things worse,” he said.

The governor vowed to propose legislation that would toughen penalties for committing crimes in Nevada, and proposed provisions including lowering the felony theft threshold, allowing for tougher sanctions for parole violations and making fentanyl possession a category B felony.

And public safety employees weren’t the only state employees Lombardo proposed to receive a raise.

The governor proposed a cost of living adjustment of 8 percent in the first year and an additional 4 percent the following year for state employees. He also proposed an annual retention bonus of $2,000 for all executive-branch employees.

Many of Lombardo’s proposals were met with approval from the Vegas Chamber, which called the address “forward thinking.”

“The Chamber applauds the Governor for recognizing the struggles small businesses and employers continue to face from the impacts of COVID and the current economy,” the chamber wrote in a statement. “Lowering the Modified Business Tax by 15% to 1.17% is great news for employers. And raising the threshold for the Commerce Tax to $6 million will cause fewer small businesses to be impacted by this tax. Both measures are good news for Nevada businesses, economic growth, and job creation.”

“Tonight, we heard no bold proposals to fix the ongoing crisis in our schools,” Etcheverry said. “Instead, Governor Lombardo dusted off a failed voucher scheme that will do nothing to improve the quality of education in Nevada. Transferring more public tax dollars to private schools is the wrong answer.”

But the rival union Clark County Education Association “applauded” many of the governor’s education focused proposals, including increasing per-pupil funding.

“We applaud Governor Lombardo’s historic investment in our Pupil Centered Funding Plan, which provides for our base per pupil funding levels as well as the additional weight values for some of our most at-risk students. This kind of investment is unprecedented and has been a long time coming,” the group wrote in an emailed statement.

“”We applaud the proposals shared by Governor Lombardo on expansion of school choice for Nevada children. No child’s opportunities should be limited to the zip code they reside in,” the group said in a statement.

The party also threw support towards other proposals made by Lombardo, including the gas tax holiday and his comments on public safety.

“You did hear a few things from the governor that felt very partisan in nature. And I also heard that he wants to try to work together so I am hopeful and optimistic that we will be able to do just that,” she said.

But the Democrats also took issue with several parts of the Republican governor’s proposals, including his comments on the criminal justice reform bill.

“I was disappointed to see us fall back on this tough-on-crime narrative, which in the end just cost the state tons of money and doesn’t make us any safer. I mean, as Nevada taxpayers, nobody should want that,” Yeager said. “It’s not enough to just show up and have your talking points like you’re on the campaign trail. Show me the data that shows that anything we did in the Assembly Bill 236 has made our communities less safe. It doesn’t exist.”

Cannizzaro pointed out a number of issues absent from the governor’s speech, including proposals related to affordable housing, the cost of health care and women’s access to care, but said she was glad to see the gas holiday as part of the proposals.

“I’m glad to see that that is part of a policy proposal,” she said. “I think the No. 1 thing for us is going to be ensuring that this does not create an opportunity for oil companies who are profiting billions of dollars to come into the state of Nevada and see an opportunity to just have their profits.”