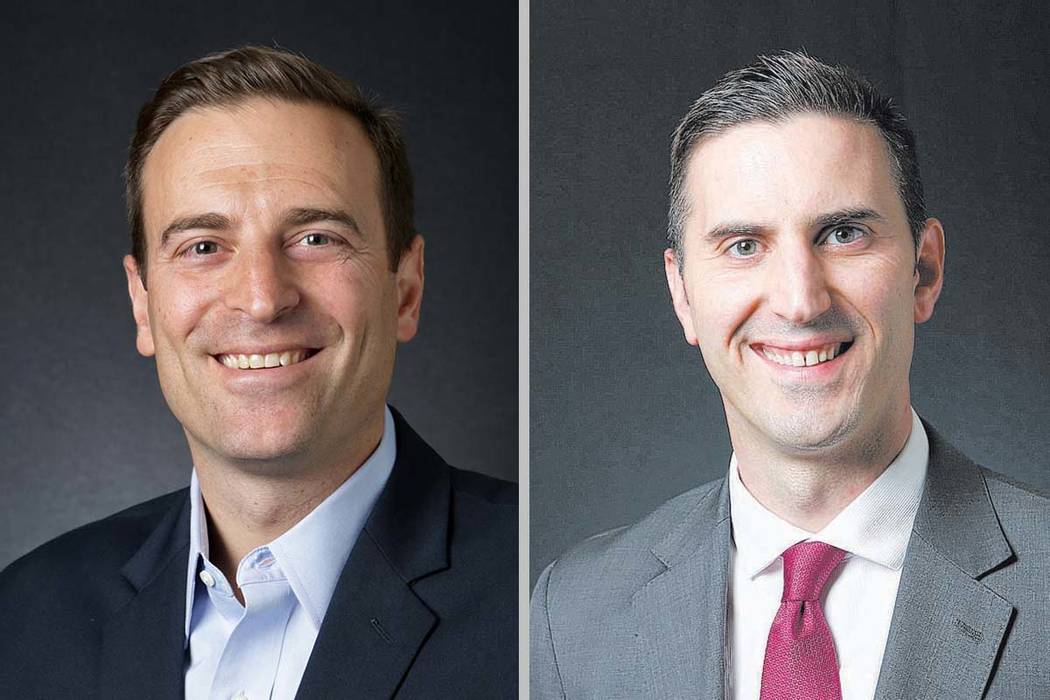 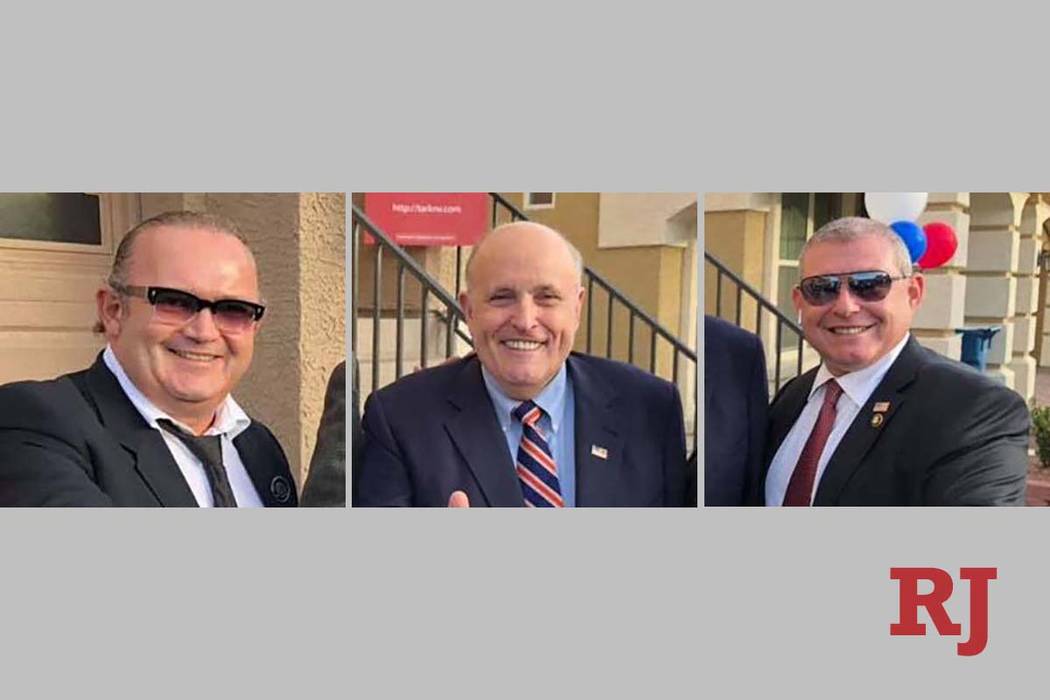 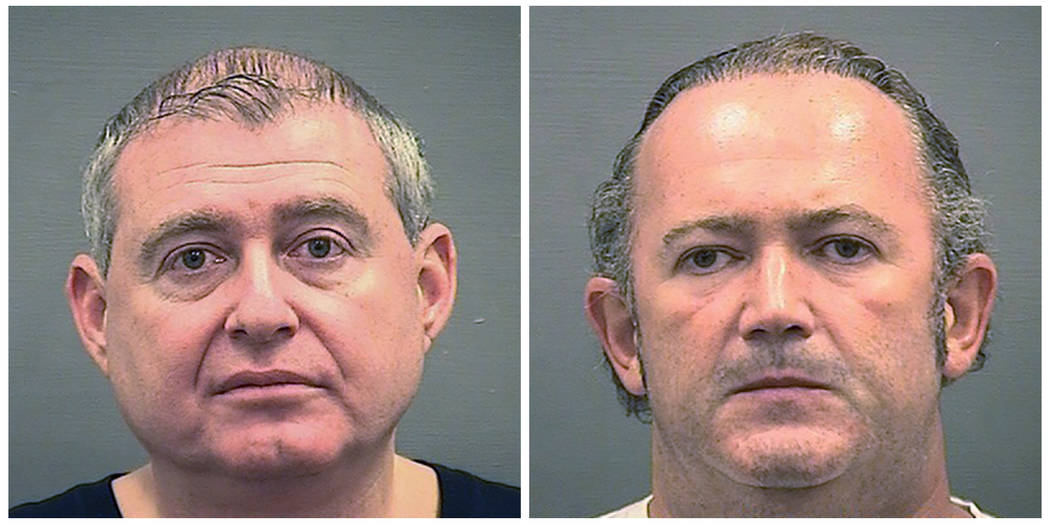 Booking photos provided by the Alexandria Sheriff’s Office of Lev Parnas, left, and Igor Fruman. The associates of Rudy Giuliani were arrested on a four-count indictment that includes charges of conspiracy, making false statements to the Federal Election Commission and falsification of records. The men had key roles in Giuliani's efforts to launch a Ukrainian corruption investigation against Biden and his son, Hunter. They were arrested Thursday as they attempted to board a flight to Frankfurt, Germany at Dulles Airport in Virginia. (Alexandria Sheriff's Office via AP)

Four men charged with illegally funneling foreign money into U.S. elections allegedly tried to obtain marijuana business licenses in Nevada and other states, according to an indictment filed in federal court in New York.

The men also made donations to two Nevada Republican political candidates in the fall of 2018, the indictment shows.

A check of Nevada campaign contributions made by one of the indicted men, Igor Fruman, shows he contributed the maximum $10,000 each to Adam Laxalt and Wesley Duncan, the Republican candidates for governor and attorney general, respectively, last year. The donations were made on Nov. 1, 2018, according to each campaign’s finance records.

Records show no additional contributions to other candidates by Fruman or any of his co-defendants.

Duncan, through a spokesman, said he was “made aware of the story about the indictment this morning and immediately had the treasurer from my (attorney general) campaign refund Mr. Fruman’s contribution. I had no idea Mr. Fruman was acting unlawfully.”

Andy Matthews, a spokesman for Laxalt, said Thursday that Fruman “came to a Las Vegas fundraiser. Adam doesn’t know the man.” Later, a consultant for Laxalt’s 2018 gubernatorial bid said that Laxalt, too, would be returning the contribution.

“Today’s indictment states that the defendants ‘concealed the scheme from the candidates, campaigns, federal regulators, and the public,’” consultant Robert Uithoven said in a statement, quoting from the indictment. “Until this morning, like everyone else, Adam was unaware of the illegal activity and he intends to return the donation.”

Fruman, and a second man named in the indictment, Lev Parnas, are associates of President Trump’s personal attorney, Rudy Giuliani. They helped fund Giuliani’s efforts to stir political investigations in Ukraine against Democratic presidential candidate Joe Biden and his son, Hunter. The two were scheduled to be deposed this week by congressional investigators as part of the impeachment inquiry against President Trump.

They were taken into custody on Thursday in Virginia.

The indictment, unsealed on Thursday in New York, accuses Parnas, Fruman and two other defendants, David Correia and Andrey Kukushkin, of multiple efforts to evade federal campaign finance law against foreign giving by making contributions and concealing the foreign source of the funds.

Parnas and Kukushkin are from Ukraine, Fruman is from Belarus, and Correia is from the United States. All four are U.S. citizens.

In the scheme involving marijuana licenses, the indictment says the four defendants worked from June 2018 to April of this year to make donations on behalf of an unnamed Russian businessman identified in the indictment as “Foreign National-1.”

Beginning in July 2018, according to the indictment, the four “made plans to form a recreational marijuana business that would be funded by Foreign National-1 and required gaining access to retail marijuana licenses in particular states including Nevada.” In September, they met in Las Vegas to discuss the venture and “also attended a political fundraiser” for an unnamed Nevada state candidate, “Candidate-1.”

The defendants “took steps to hide Foreign National-1’s involvement” in the marijuana business venture, including any political contributions associated with it, because of — in Kukushkin’s words — “his Russian roots and current political paranoia about it.”

Parnas, Fruman and Kukushin, according to the indictment, attended a campaign rally for “Candidate-1” and another state candidate on Oct. 20, 2018. On that date, President Trump appeared in Elko to campaign for Republican state candidates.

Parnas, Fruman and Kukushkin sent photographs of themselves posing with a second unnamed state candidate to the Russian foreign national who funded the donations. Subsequently, on Nov. 1, Fruman made the contributions to the two state candidates on behalf of the Russian businessman.

Those donations match up with the contributions Fruman made to Laxalt and Duncan.

The indictment alleges a scheme by the defendants to commit up to $2 million in political contributions to federal and state candidates as part of a “multi-state license strategy” to obtain licenses. The unidentified Russian businessman made two transfers totaling $1 million in September and October last year to a U.S. corporate bank account Fruman controlled, according to the indictment.

The deadline to apply for a Nevada marijuana business license was in September 2018. On Oct. 25, Kukushkin told Fruman, Parnas and the Russian businessman that they were “two months too late to the game unless we change the rules,” adding that they “needed a particular Nevada state official, the position for which Candidate-1 was running, to ‘green light to implement this.’”