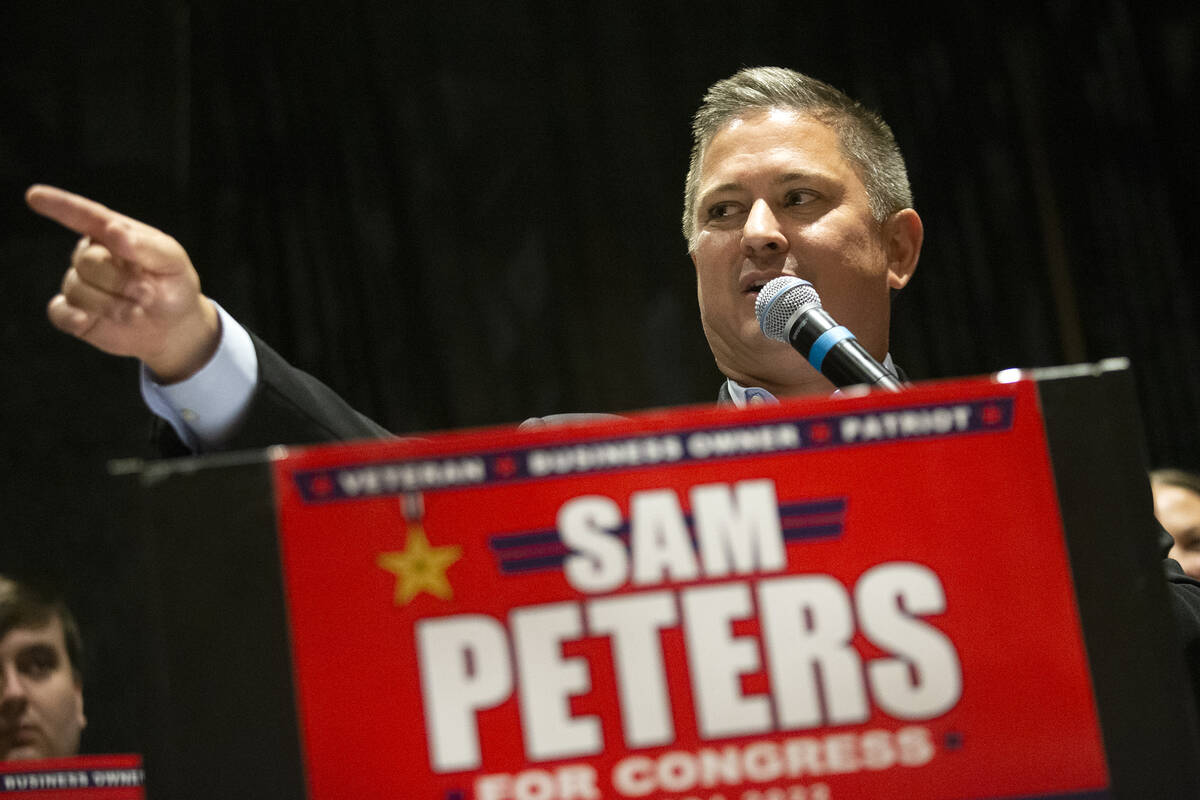 Republican Sam Peters, who is running for Nevada's 4th Congressional District, speaks during the "Fight for Freedom" Campaign Kickoff event at the Ahern Hotel on Tuesday, Sept. 14, 2021, in Las Vegas. About 100 people attended the event. (Ellen Schmidt/Las Vegas Review-Journal) @ellenschmidttt 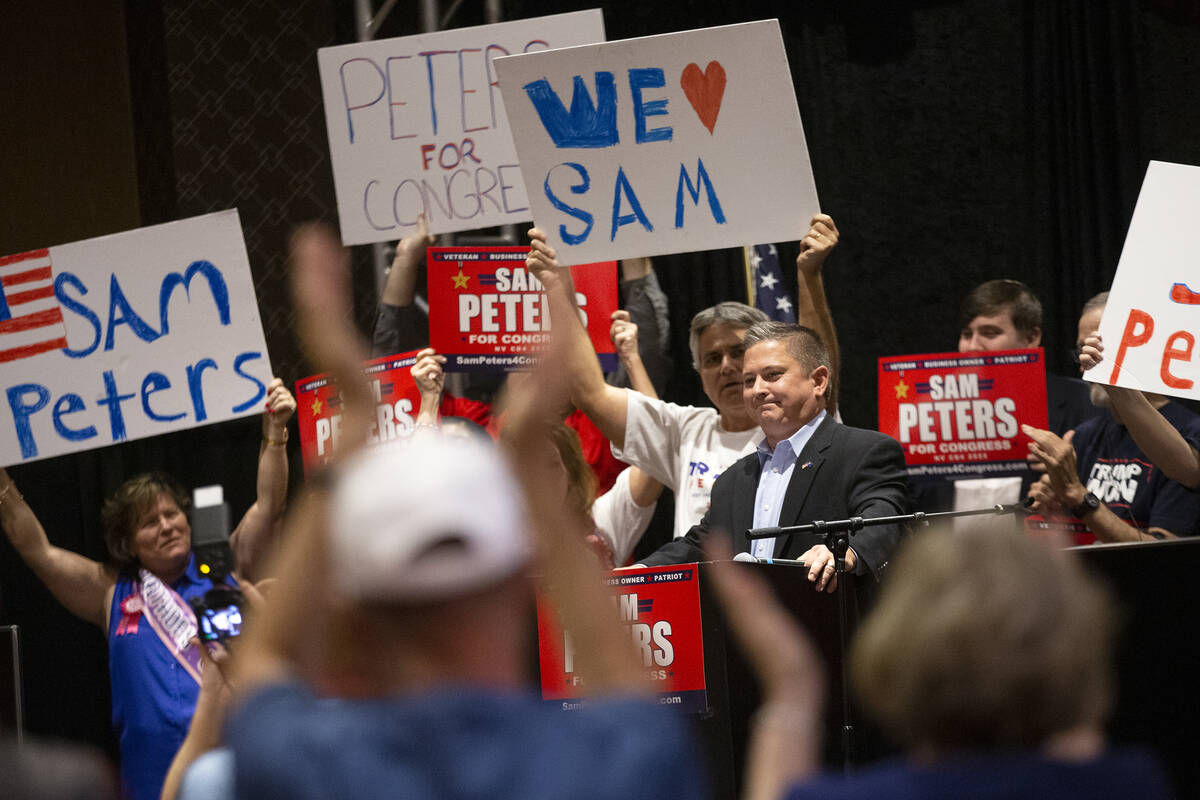 Republican Sam Peters, who is running for Nevada's 4th Congressional District, reacts as the crowd cheers during the "Fight for Freedom" Campaign Kickoff event at the Ahern Hotel on Tuesday, Sept. 14, 2021, in Las Vegas. About 100 people attended the mostly maskless event. (Ellen Schmidt/Las Vegas Review-Journal) @ellenschmidttt 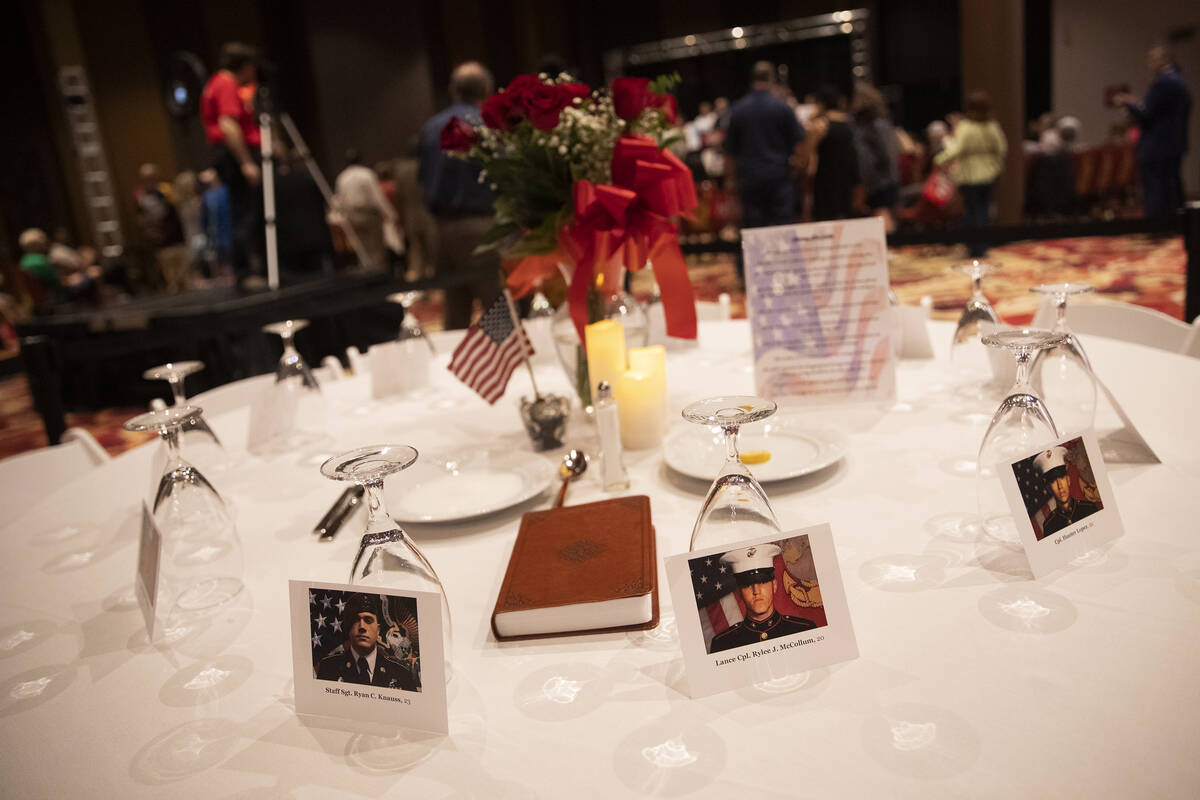 A table is set with photos of the thirteen United States service members killed during the Kabul airport attacks during the "Fight for Freedom" Campaign Kickoff event at the Ahern Hotel on Tuesday, Sept. 14, 2021, in Las Vegas. The event served to launch Republican Sam Peters' bid for Nevada's 4th Congressional District. (Ellen Schmidt/Las Vegas Review-Journal) @ellenschmidttt 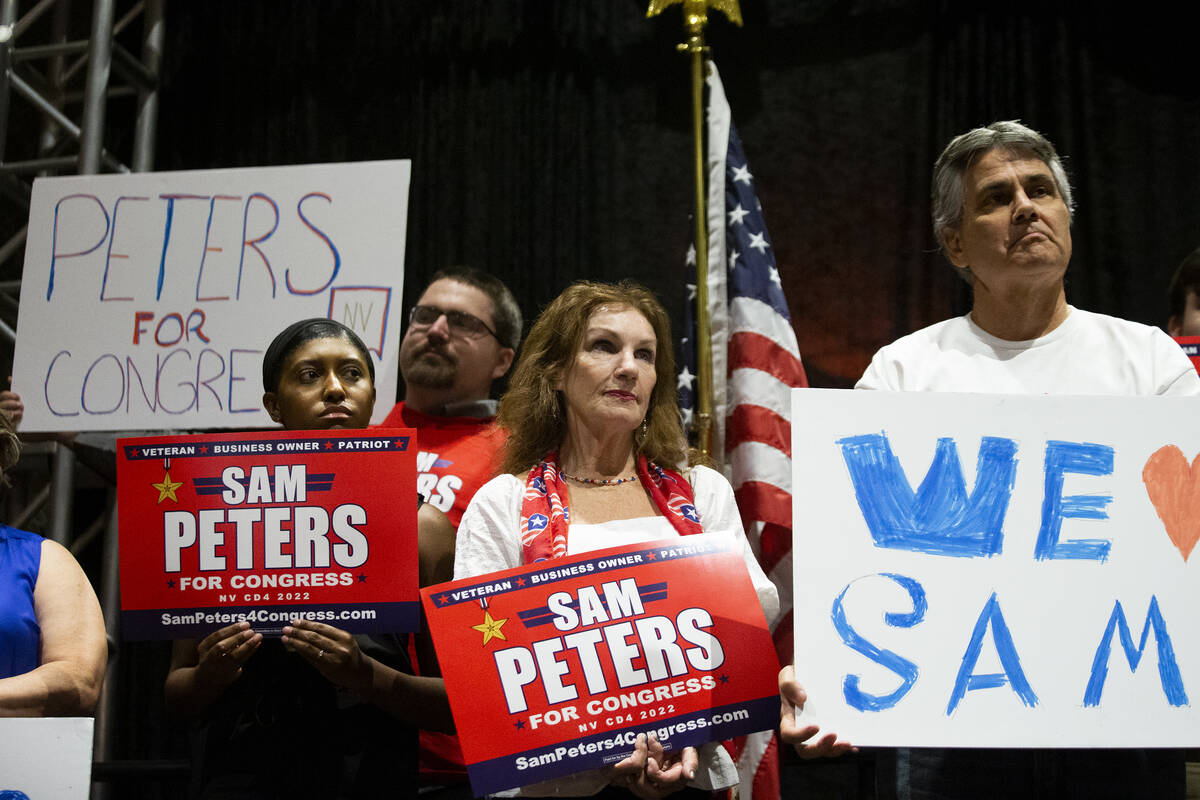 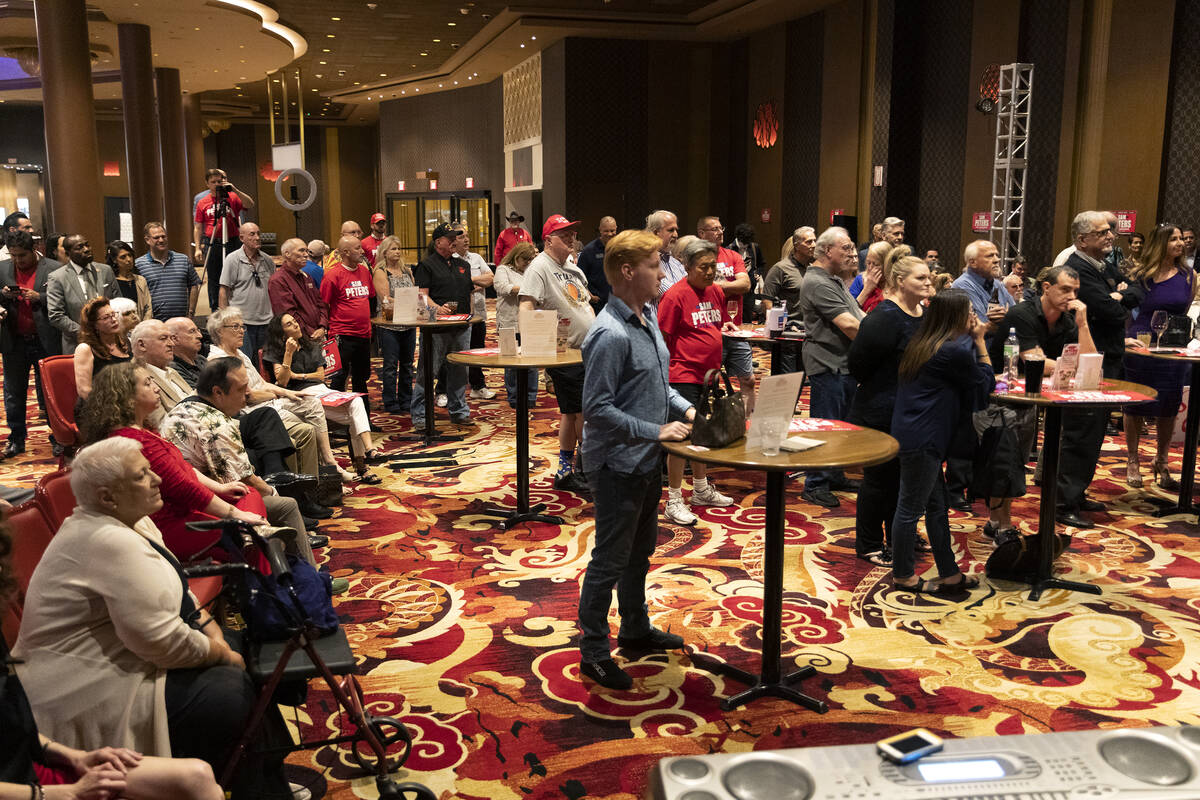 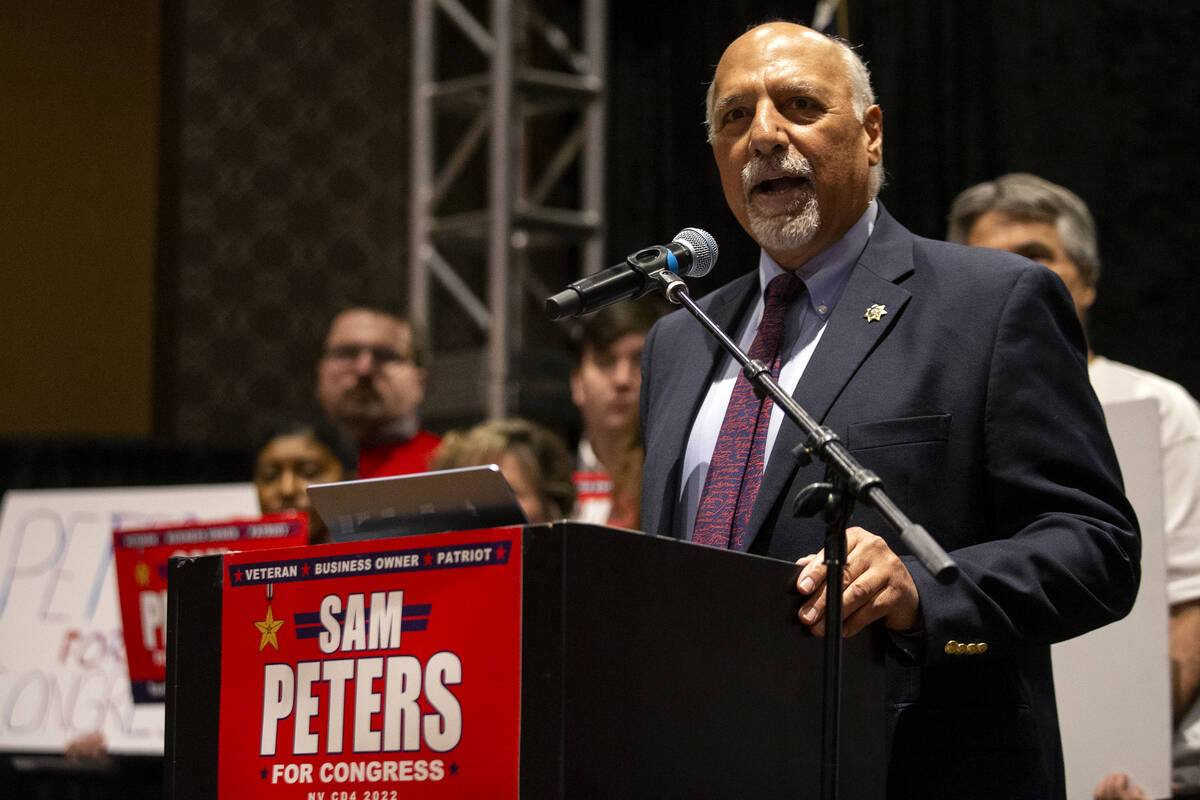 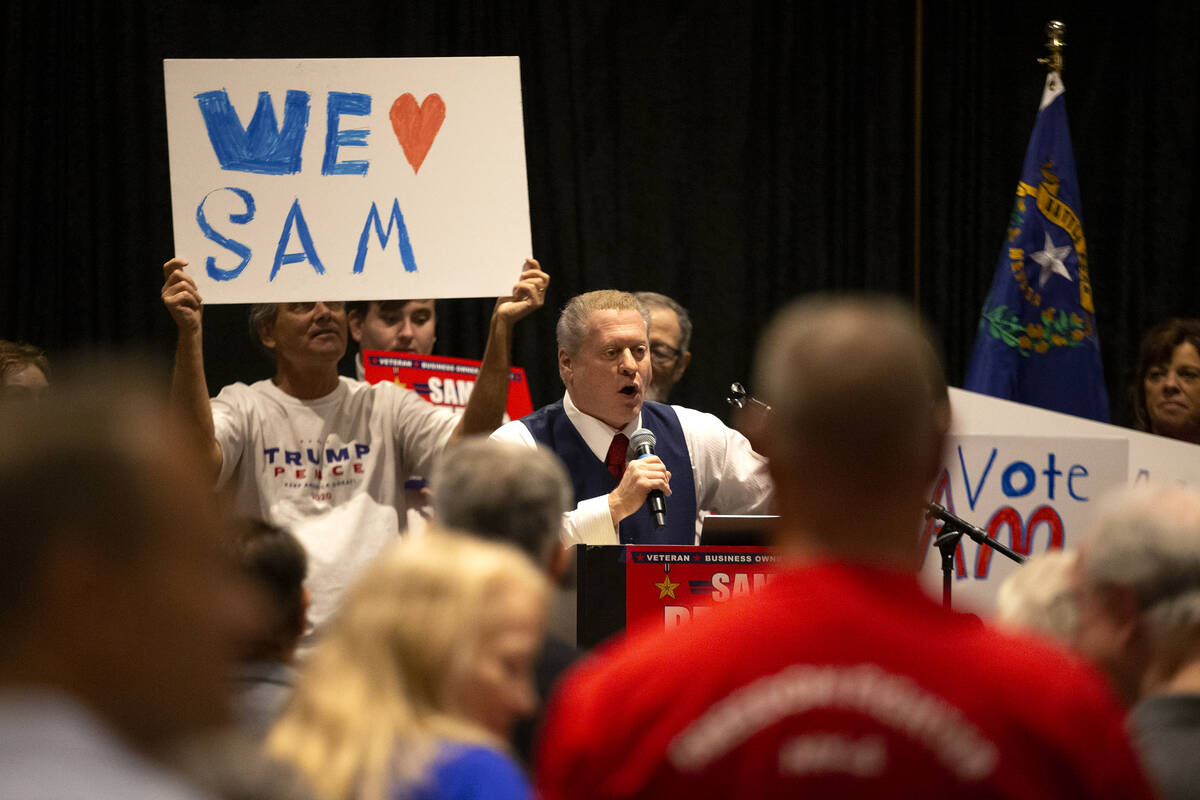 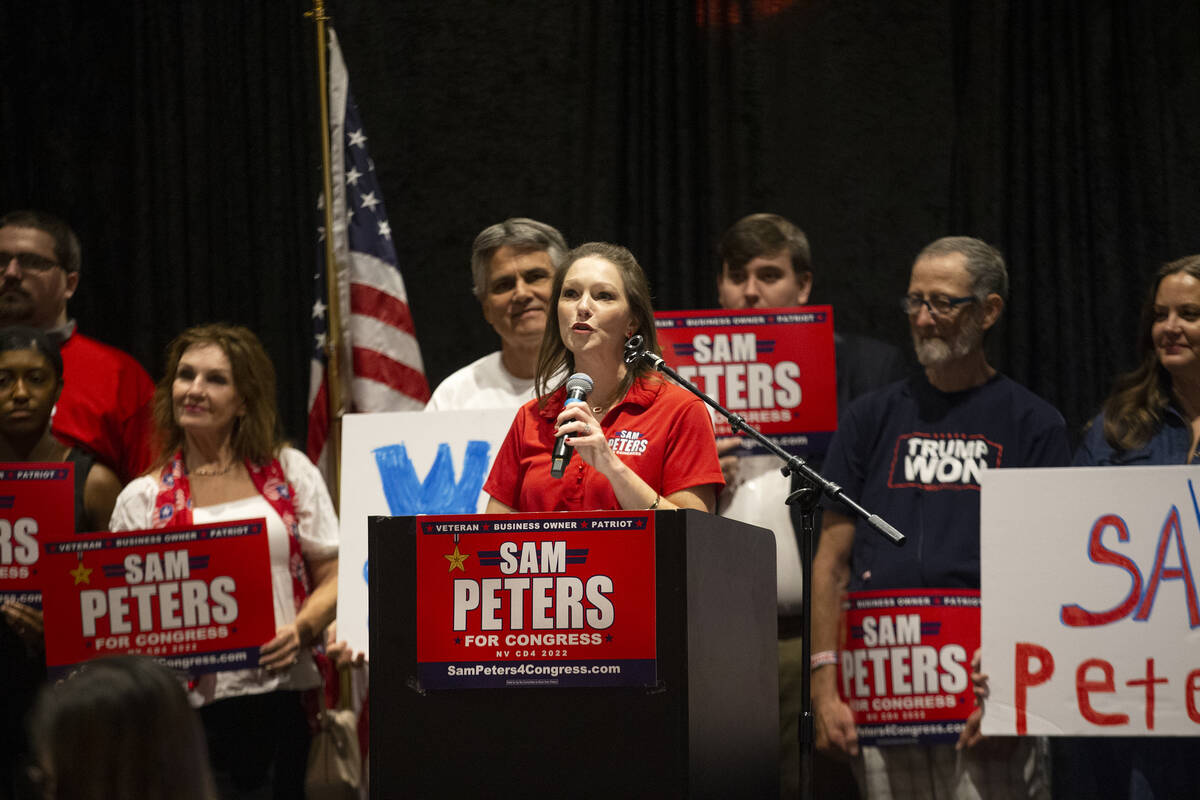 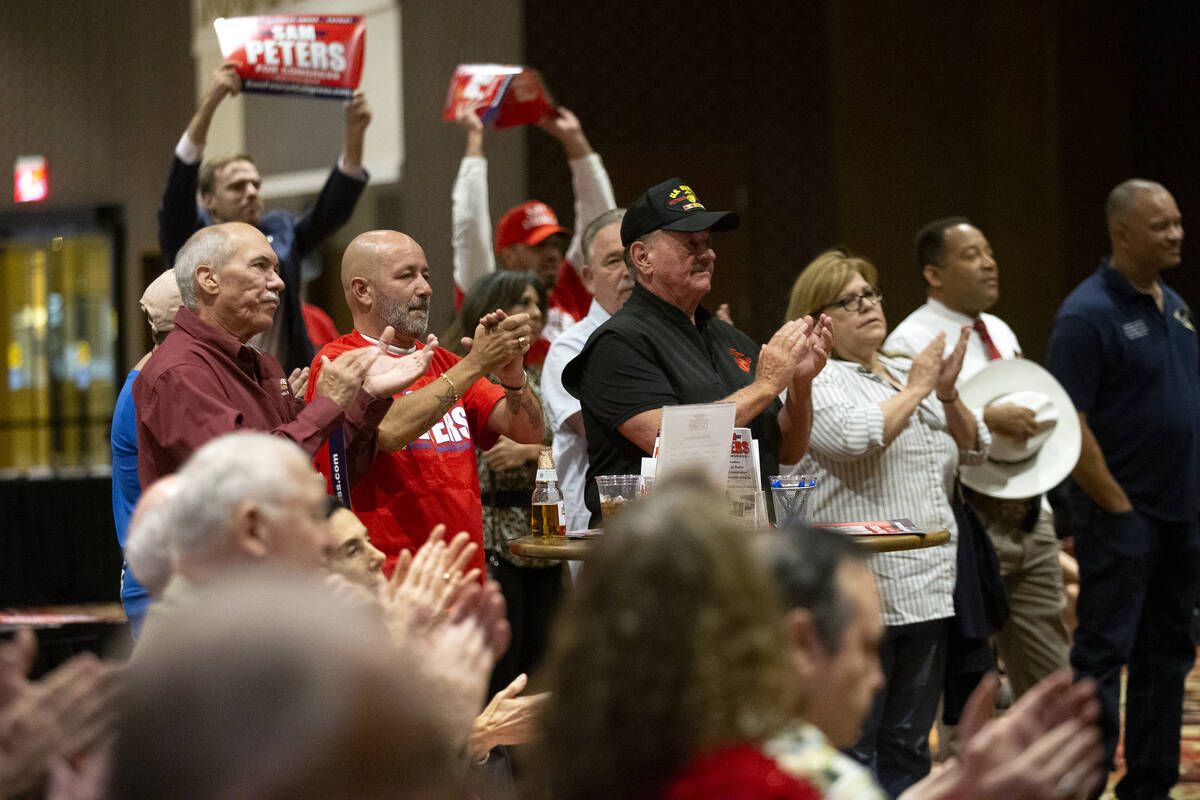 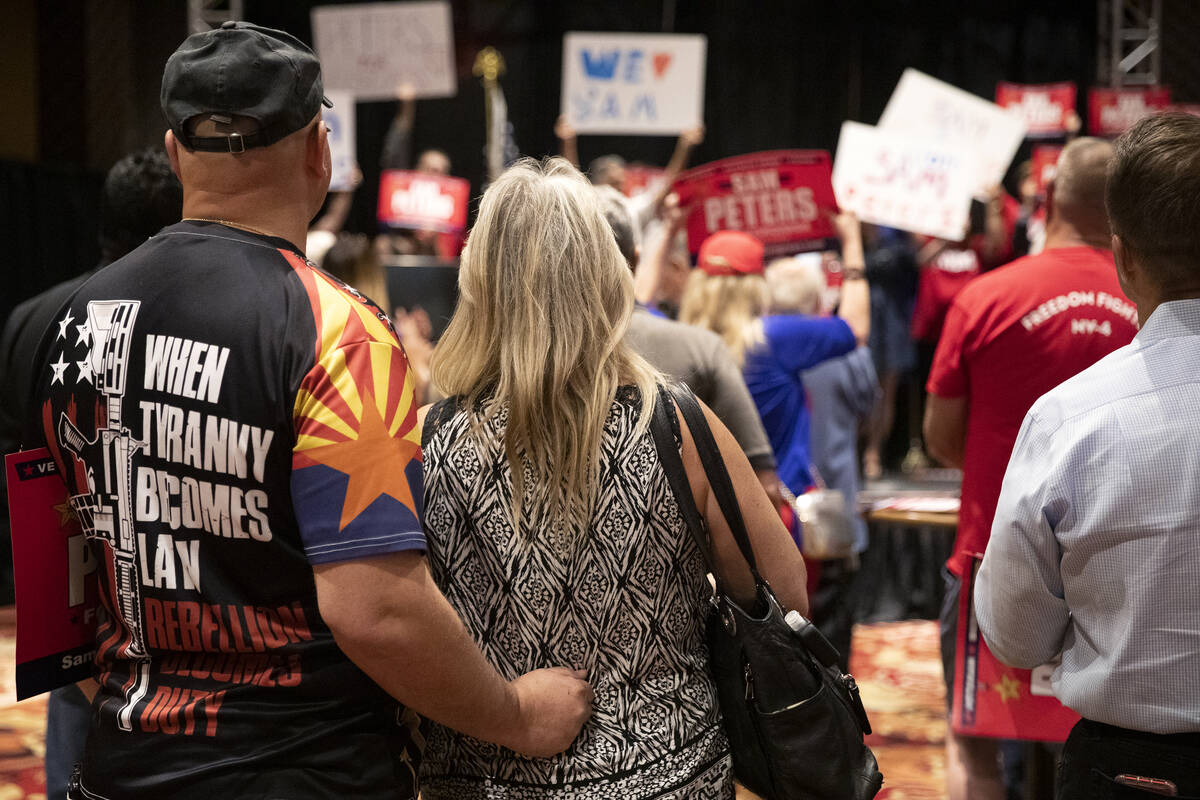 In front of a crowd of maskless supporters, Peters said he was taking the fight to the enemy.

“The enemy we face tonight is one within our borders,” he said from a stage at the Ahern Hotel. “It’s occupying the Capitol and it’s occupying your White House. It’s an enemy that at every opportunity has shredded our Constitution and done everything possible to tear away your rights.”

Peters told supporters that, among other things, he was running to protect individual liberties, build a wall on the U.S.-Mexico border, protect the strength of the military and decrease the size of government, starting with “defunding (Dr. Anthony) Fauci.”

He said he wants to demand election audits and voter ID legislation.

“Together, we can take back the 4th Congressional District,” he said. “With your help, we can do this. And together, we can fight for the people and the values that made this country great. We can make Nevada red again.”

Peters accused incumbent Democrat Steven Horsford of supporting open borders and said the congressman backs policies he contends would infringe on Second Amendment rights. He said Horsford supports critical race theory being taught in schools and that he was silent on coronavirus-related shutdowns and mandates.

He told the crowd that Horsford “doesn’t embody the American values that we have.”

But Horsford’s campaign denied the attacks.

“Congressman Horsford is focused on delivering for the people of Nevada’s Fourth District — putting money in the pockets of hard-working families, getting COVID-19 shots in arms to crush the pandemic, and bringing much-needed relief to our small businesses,” spokeswoman Geneva Kropper said. “The people of Nevada’s Fourth District have always been, and will always be, his top priority.”

Peters, a small-business owner and retired U.S. Air Force officer, must first win the Republican primary next year before he can face Horsford in the general election.

He will face former Trump campaign employee Carolina Serrano in the primary.

In 2020, Peters unsuccessfully ran in the primary for the congressional seat. He finished in second place to former Assemblyman Jim Marchant, who went on to lose in the general election. Marchant has announced a bid for Nevada secretary of state.

Peters told the Review-Journal this time will be different because he has more name recognition and has hired Marchant’s 2020 political consultant. He formally announced his candidacy for the seat in April.

During his time in the military, Peters served multiple tours of duty in the Middle East. He now owns and operates an insurance business. 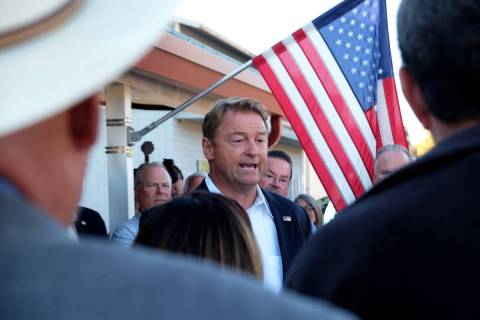 Former Republican U.S. Sen. Dean Heller on Monday announced his long-anticipated run for governor in 2022, setting up a multi-candidate primary and roiling the GOP field.