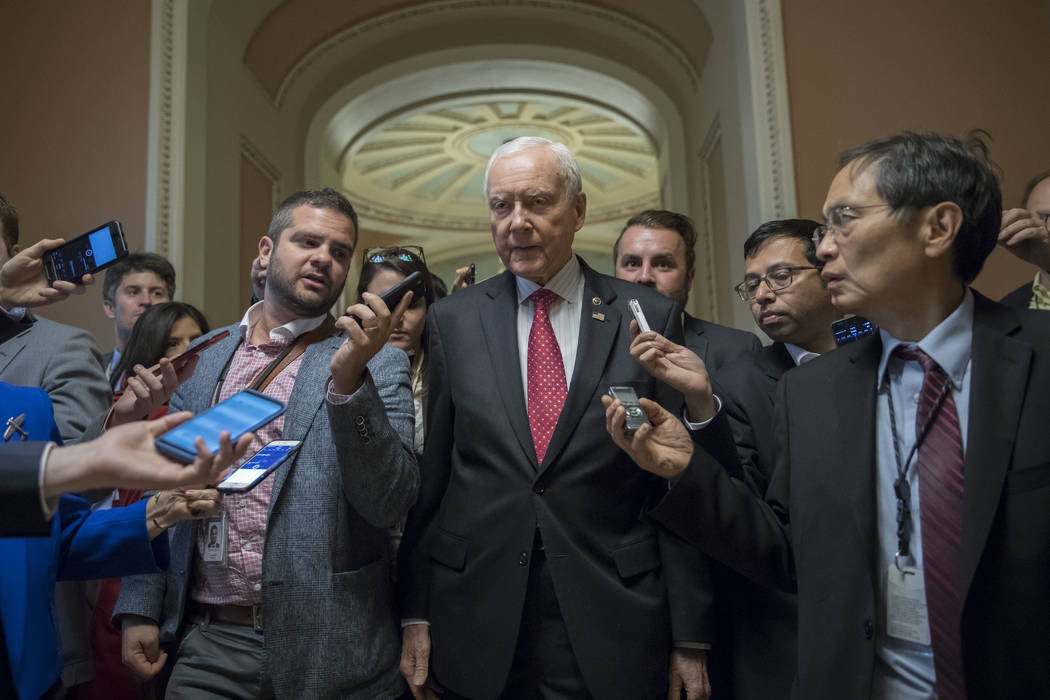 Senate Finance Committee Chairman Orrin Hatch, R-Utah, is surrounded by reporters as he walks to a closed-door meeting at the Capitol in Washington, Tuesday, Sept. 12, 2017. (AP Photo/J. Scott Applewhite)

WASHINGTON — A bipartisan bill to extend funding for the Children’s Health Insurance Program was filed in the Senate ahead of a Sept. 30 deadline to keep federal dollars flowing to states for health care that covers 8.9 million children nationally, including 25,000 in Nevada.

Sen. Orrin Hatch, R-Utah, the chairman of the Senate Finance Committee, and ranking Democrat Ron Wyden of Oregon filed the bill that would extend funding for five years, plus add protections and more flexibility for states to administer the program.

Hatch said passage of the legislation with bipartisan support would provide “much-needed certainty for the vulnerable children and families who rely on this critical program for health coverage.”

Wyden said he would work with colleagues to “focus on this bipartisan priority and move it through Congress as quickly as possible.”

The state’s congressional delegation supports extension of CHIP program, which expires at the end of the fiscal year.

Failure to extend CHIP funding would likely result in coverage losses for children and increased financial pressure for states, according to the Kaiser Family Foundation.

There are 25,000 Nevada children in the state’s CHIP program, according to the Nevada Department of Health and Human Services.

Rep. Dina Titus, D-Nev., was instrumental in creating the state CHIP “Nevada Check Up” program when she served in the state Senate. Any efforts to reduce funding, she said, “would be unconscionable.”

CHIP was created 20 years ago to provide health coverage for vulnerable children in families that were too poor to afford private coverage, but still didn’t qualify for Medicaid.

CHIP program eligibility expanded under the Affordable Care Act in 2010. Matching federal funds increased by 23 percent, but the expansion and increased funds came with a restriction on states on eligibility rules.

If extended, Nevada is projected to receive and spend $78.6 million in federal CHIP funding in 2018, according to the Medicaid and CHIP Payment and Access Commission, known as MACPAC.

With only $16.5 million in funds for 2017 unspent, the state would exhaust its funds in January 2018 without congressional action, according to MACPAC.