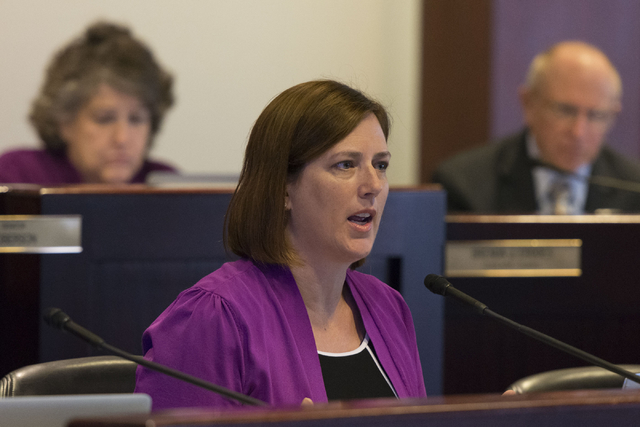 When state Sen. Becky Harris, R-Las Vegas, learned lawmakers would consider legislation on skill-based gaming in 2015, she knew she had to educate herself about the issue.

So she enrolled for a gaming master’s degree and in a gaming innovation class at UNLV.

“There are times when you hear about an appointment and you think, ‘You know what? The world really is right,’ because here is a highly competent, smart soul who will be in one of our most important leadership roles,” Bo Bernhard, executive director of UNLV’s International Gaming Institute said of Harris.

Bernhard said he was surprised but happy to learn a rising star in the Republican party would become the first woman to hold the top regulatory position of the Nevada Gaming Control Board.

Harris, 49, who represents District 9 in Clark County, has undergraduate, master’s and law degrees from UNLV and Brigham Young University. In the Senate, she chaired the Education Committee and has been a member of the Judiciary Committee.

She succeeds A.G. Burnett, who resigned in December to enter the private sector as an attorney with the McDonald Carano firm in Reno.

When skill-based gaming came along, Harris recalled needing to learn more about it.

“I remember asking questions and feeling out of my depth a little bit and knowing that it was important to be able to understand the industry and ask the right questions. I felt like I didn’t have the level of knowledge that I wanted,” Harris said about her decision to become of part of the first class pursuing the Letter of Laws Masters in Gaming Law and Regulation degree, known as LL.M.

“The LL.M. program was one of the most interesting and fun things I’ve ever done,” she said.

Harris also became involved with the National Council of Legislators from Gaming States, an association of lawmakers from across the country in states with legalized gambling. Because of new time restraints, she plans to step down as treasurer of that organization.

“To be appointed to the finest regulatory system in the world is a tremendous responsibility,” Harris said in a statement issued by the governor’s office. “I am grateful for the trust and confidence Governor Sandoval has placed in me. I am committed to serving with determination and honor.”

Harris said she would miss serving in the state Senate, “but my public service to the citizens of Nevada will certainly go on in this new full-time role.”

The control board is the state’s investigative, enforcement, licensing and taxing arm. It has 404 employees in six divisions overseeing 2,921 licencees. Its full-time chairman is paid $158,879 a year.

The state’s two-tiered gaming regulatory system also includes the five-member Nevada Gaming Commission, which establishes regulations and policies and approves licensing recommendations from the control board.

Burnett was in the third year of his second four-year term as chairman when he announced his departure last month. Harris will complete that term in January 2019. The governor who succeeds Brian Sandoval will decide whether to reappoint her.

Reid in the interim

After Burnett stepped down, Sandoval appointed Shawn Reid as interim chairman. Reid conducted the board’s meeting Wednesday and Thursday in Las Vegas with its other member, Terry Johnson.

Harris said she was contacted about the position more than a week ago, and she spent several days thinking about the offer before accepting it.

Sources told the Las Vegas Review-Journal on Tuesday that Harris’ appointment was imminent.

Harris, a moderate Republican, flipped her Senate seat from blue to red in 2014, when Republicans took control of both chambers of the state Legislature for the first in at least three decades.

Even before Harris’ appointment, Democrats viewed her seat as their top target this election cycle. The district has about 7,000 more registered Democrats than Republicans, according to the latest statistics from the Nevada secretary of state’s office.

Without an incumbent, the GOP prospects for keeping the seat could now be slimmer.

“Becky Harris is one of the brightest minds in the state of Nevada,” he said in an emailed statement. “There is no better person to be appointed to the Gaming Control Board and her historic appointment as the first female chairwoman is befitting considering her resume, which is second to none.”