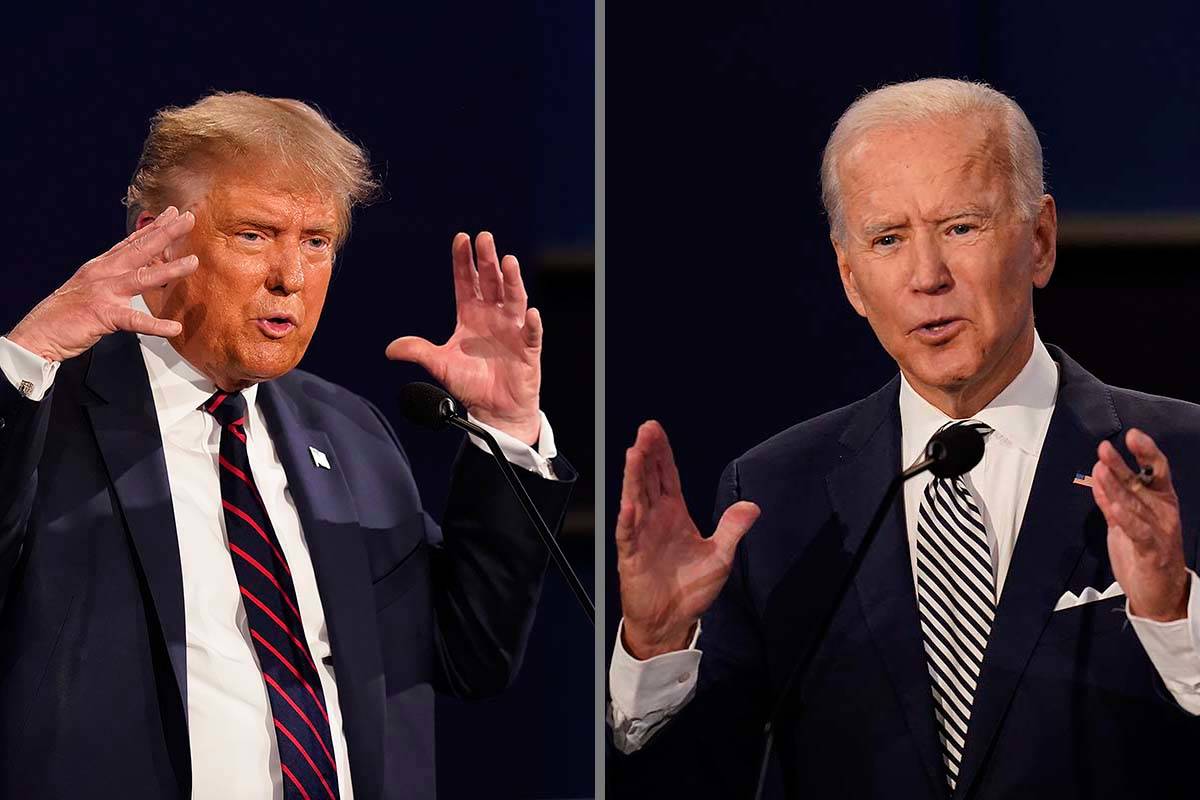 President Donald Trump and Democratic nominee Joe Biden are neck and neck in Nevada, with third-party candidates picking up small slices of the vote, according to new figures released Tuesday in The Nevada Poll™.

Six percent were undecided or refused to answer, and 4 percent said they would check “None of These Candidates,” an option on Nevada ballots.

The new numbers offer a glimpse into Nevadans’ thinking on the race after televised presidential and vice presidential debates, as well as Trump’s COVID-19 hospitalization.

Both major party candidates and their top surrogates have visited Nevada recently and made investments in advertising and staff over the past six months. Biden is trying to hold a state that has gone to Democrats in recent presidential elections, while Trump sees a chance to pick up the six electoral votes he lost in 2016 to Hillary Clinton by just 2.4 percentage points.

The Nevada Poll™ shows a slightly tighter margin in Nevada than other recent surveys of the generally underpolled Silver State.

A Siena College/New York Times poll released last week, for example, pegged Nevada at 48 percent for Biden and 42 for Trump.

Trump carried small margins among men and middle-aged respondents, while more women and voters ages 18-44 preferred Biden. The two were tied among voters 65 and older.

“The one really curious or interesting dynamic is the independents (classified in Nevada as nonpartisans),” Wilson said. “The independents in Nevada are favoring President Trump by a 4-point margin, 38 to 34, and 13 percent are undecided.”

Wilson said most of the undecided voters are either registered independents and/or have a high school education or less, which he believes the Trump campaign will view as a positive.

Trevor Smith, research director at WPA, said the margin among independents should actually be a concern for Trump’s campaign.

“According to the 2016 exit polls (and exit polls are very difficult to get right, but they give you a decent estimate of what happened), Trump won Independents by 13-points but lost the election in the state,” Smith said. “He’ll need to drastically improve his position among Independents to pull this one out.”

Trump’s campaign declined to comment on the poll’s results, but spokeswoman Samantha Zager said in a statement: “President Trump has spent his first term delivering wins for the Silver State, and with a campaign that’s had a permanent presence in Nevada for years, the President has all the momentum heading into November.”

Longtime Nevada Republican operative Sig Rogich called the race “a tossup at this juncture,” commending Trump’s campaign on its voter registration operation and efforts to identify and motivate the president’s base voters.

Rogich conceded that Biden has the advantage as shown in polling, but he believes there are a group of “quiet” Trump voters of yet-to-be-determined size across the country.

“It will all come down to turnout models — who has the best organization in place to get people to vote,” Rogich said. “Republicans have a chance in Nevada for the first time in some time.”

“Many Americans did that in 2016, and the result was a tragic presidency that has done more to destroy our political institutions than any other presidency in history,” Bryan said.

However, Bryan believes the momentum in Nevada and beyond is with his former Senate colleague.

Bryan said Trump’s insistence on campaigning in person, while possibly still contagious following his coronavirus diagnosis, shows “a reckless disregard for the safety of others” and is helping the Democratic cause.

He believes most unaffiliated swing voters will choose Biden due to Trump’s history of such behavior.

Coronavirus and motivation for voting

When voters were asked who they trusted to make the best decisions for Nevadans regarding the coronavirus, Trump scored fourth (15 percent) out of five choices, behind Gov. Steve Sisolak (35 percent), local government officials (16 percent) and individuals and businesses (16 percent).

The federal government was last with 7 percent. Eleven percent did not know or refused to answer the question.

When voters were asked to name their top motivation for submitting a ballot, getting Trump out of office was the top response from 10 choices, with 25 percent. The economy was second at 17 percent, followed by law and order/civil unrest at 7 percent and management of the coronavirus pandemic at 6 percent. No other choice had more than 4 percent, and 29 percent of voters chose a top motivation not listed in the poll.

According to secretary of state voter registration figures, 38 percent of Nevada voters are Democrats and 32 percent are Republicans.

Fifty-one percent of respondents were women and 49 percent were men.