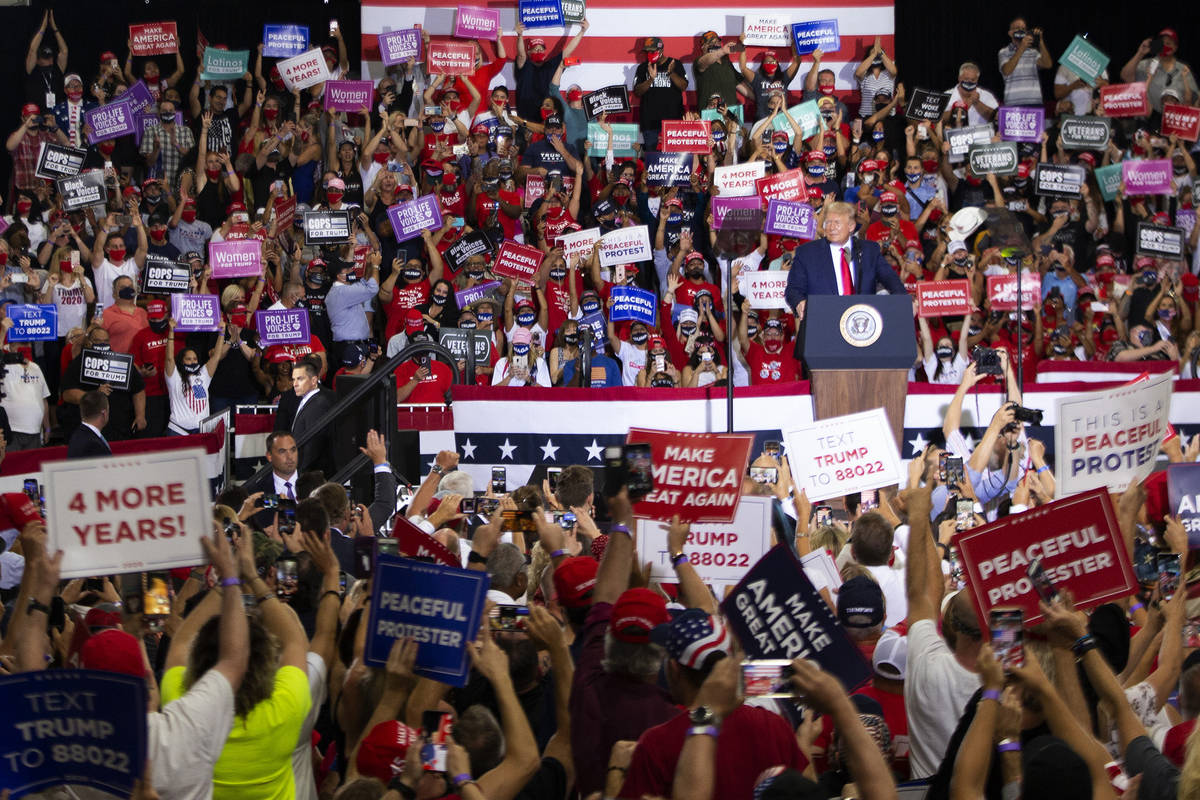 The crowd goes wild at a campaign rally for President Donald Trump at Xtreme Manufacturing on Sunday, Sept. 13, 2020, in Henderson. The gathering violated Nevada's restriction on gatherings of 50 or more people. (Ellen Schmidt/Las Vegas Review-Journal) @ellenkschmidttt 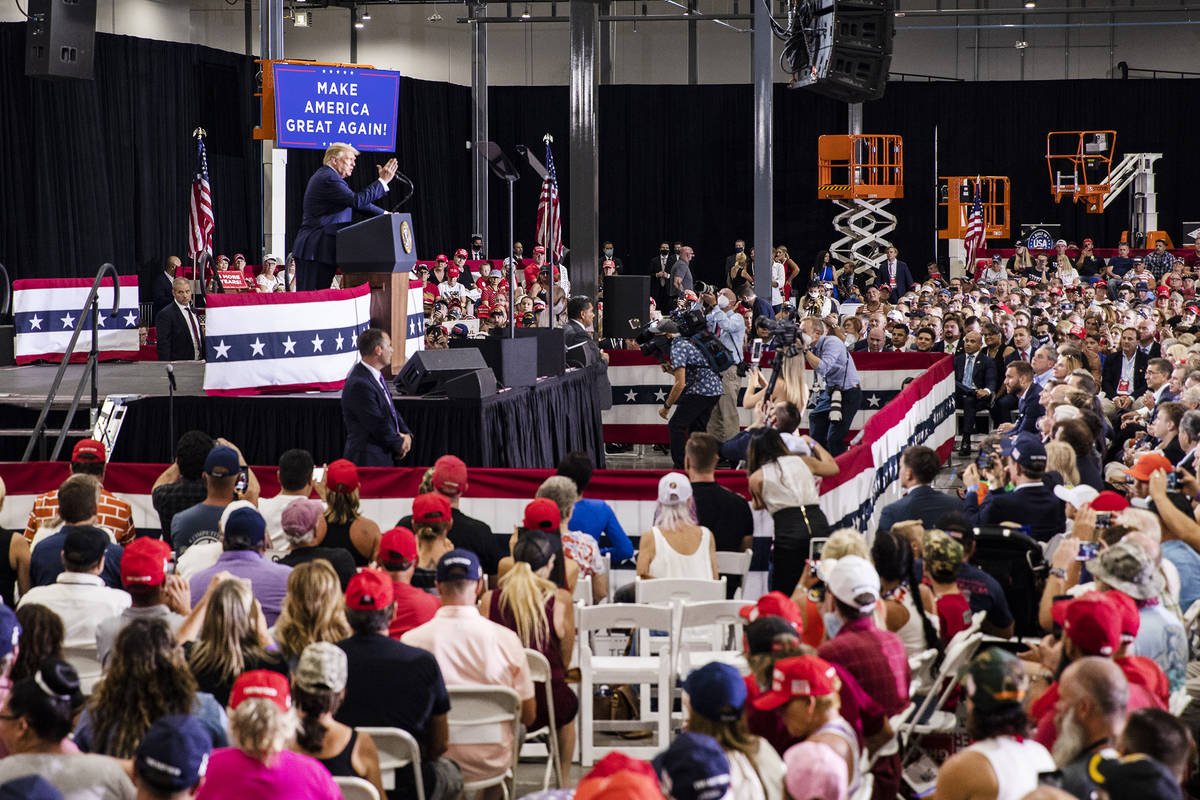 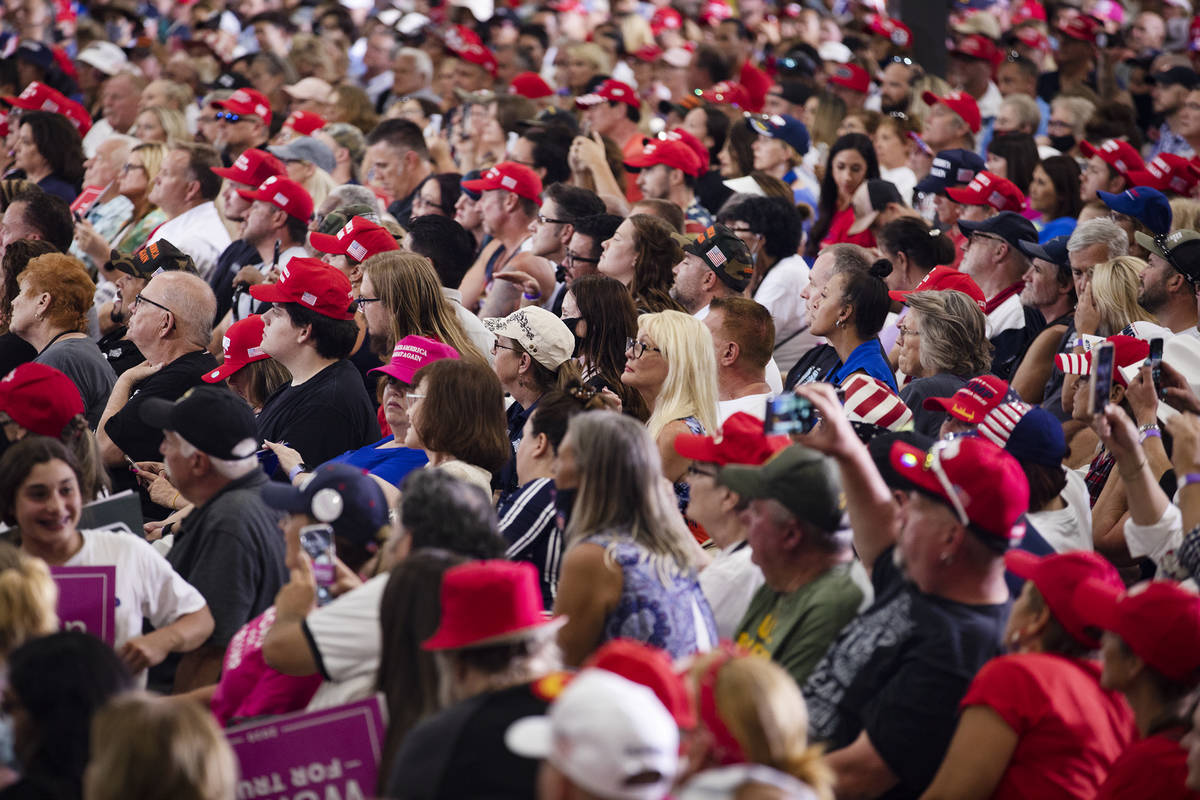 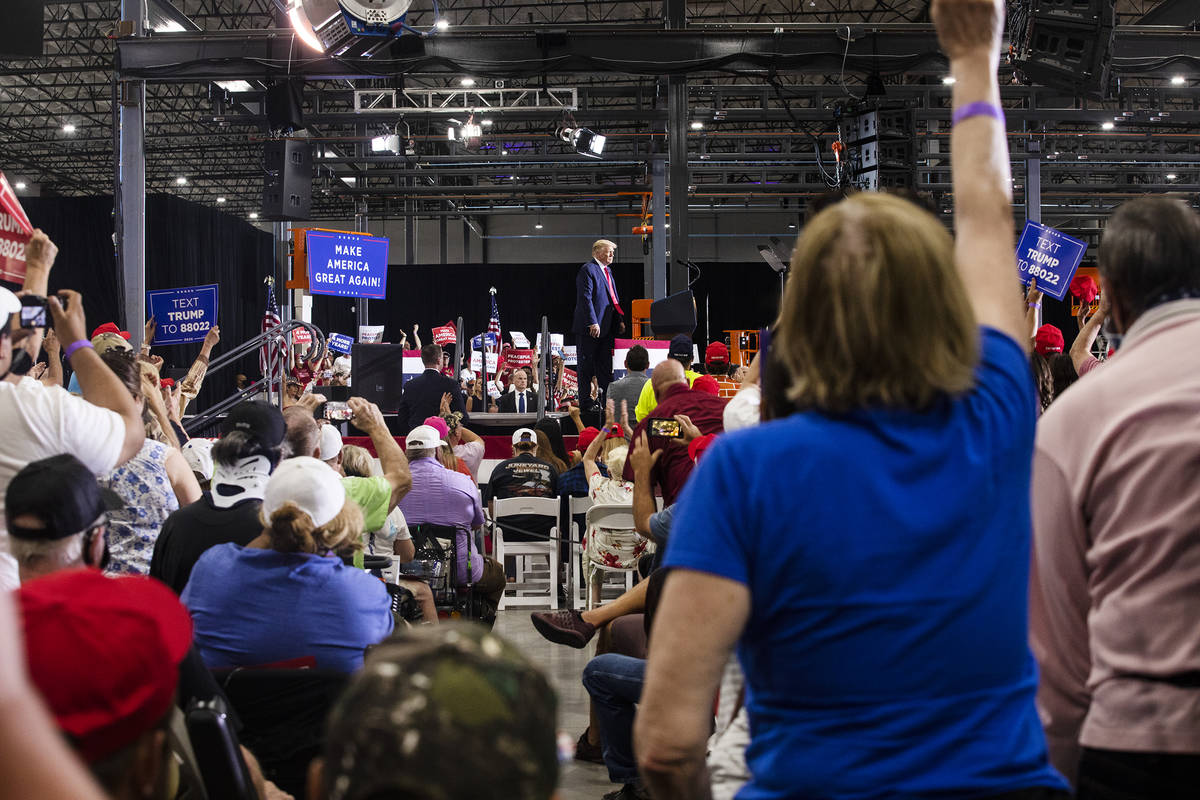 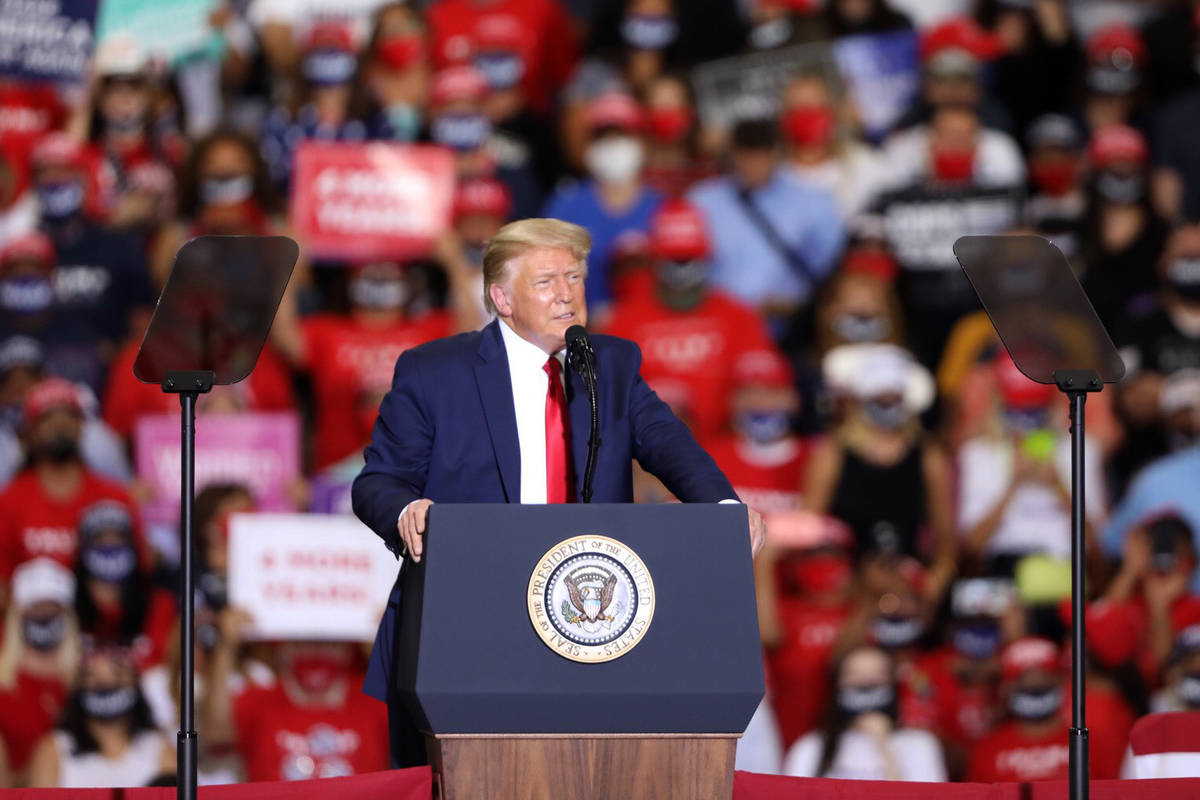 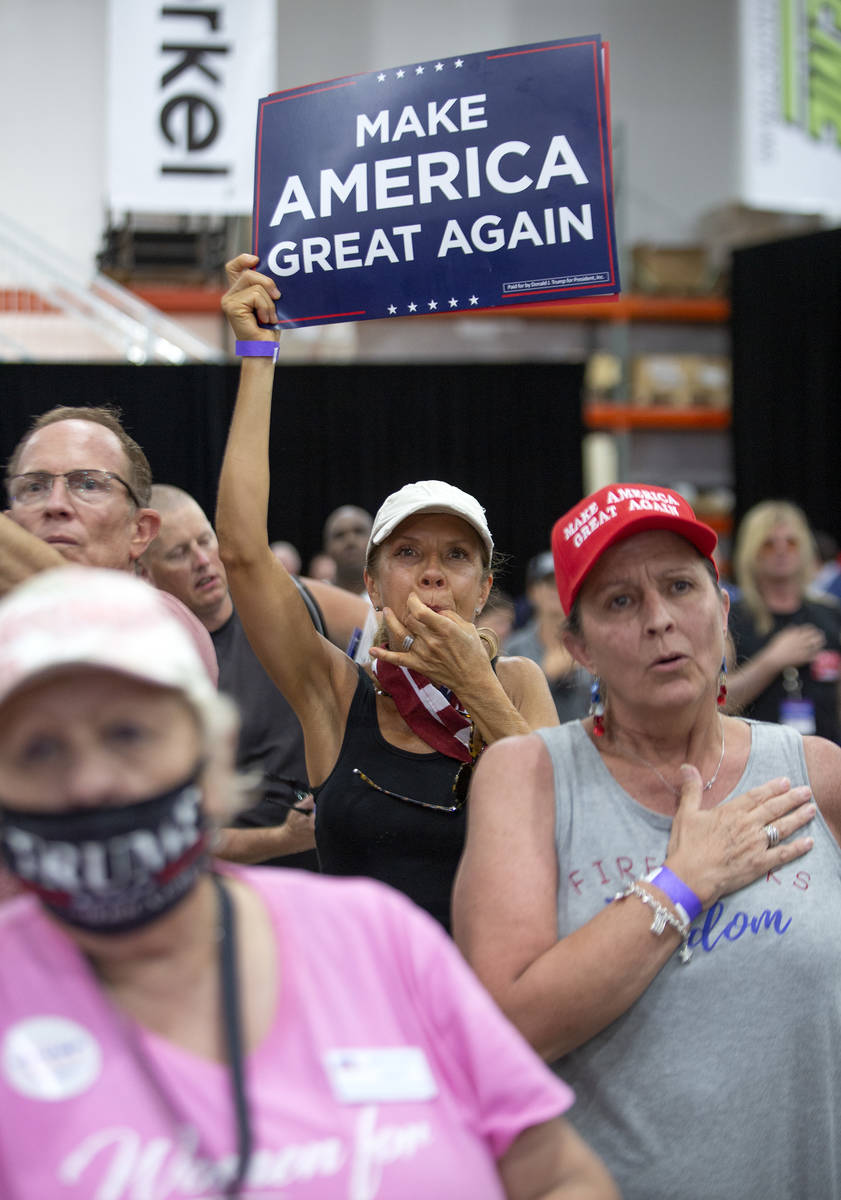 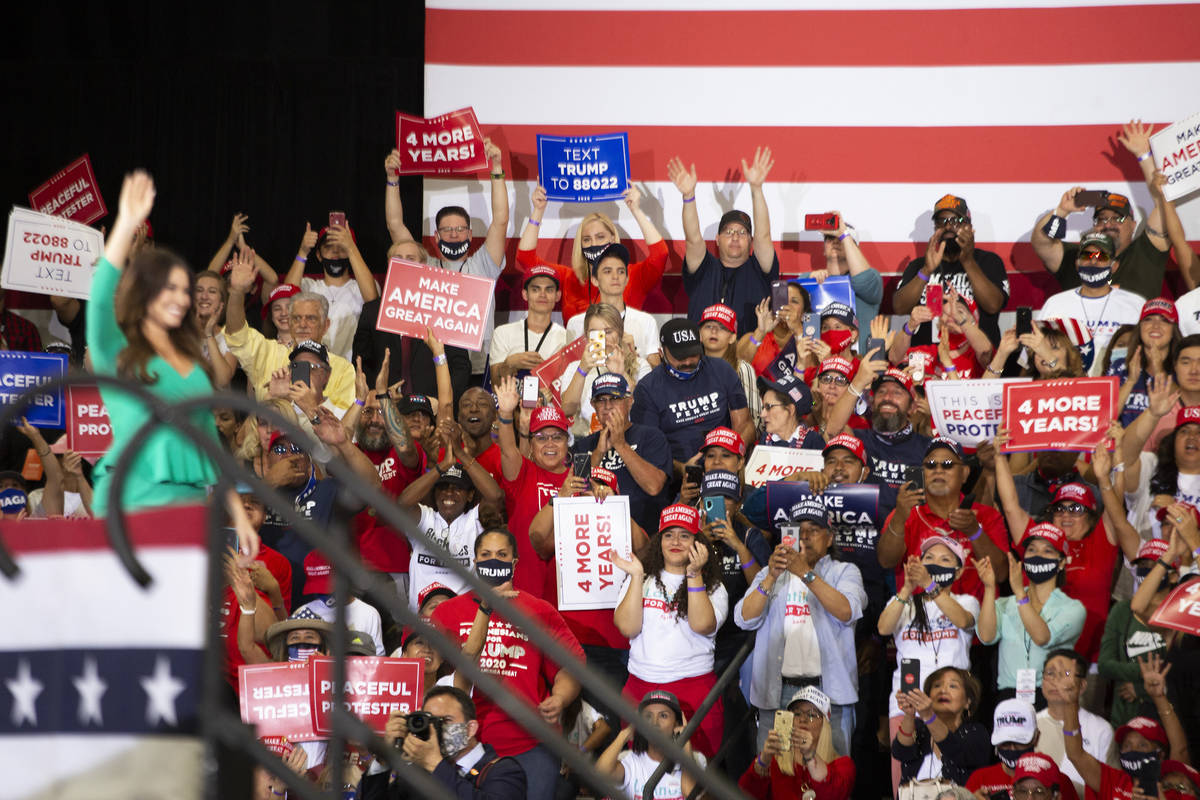 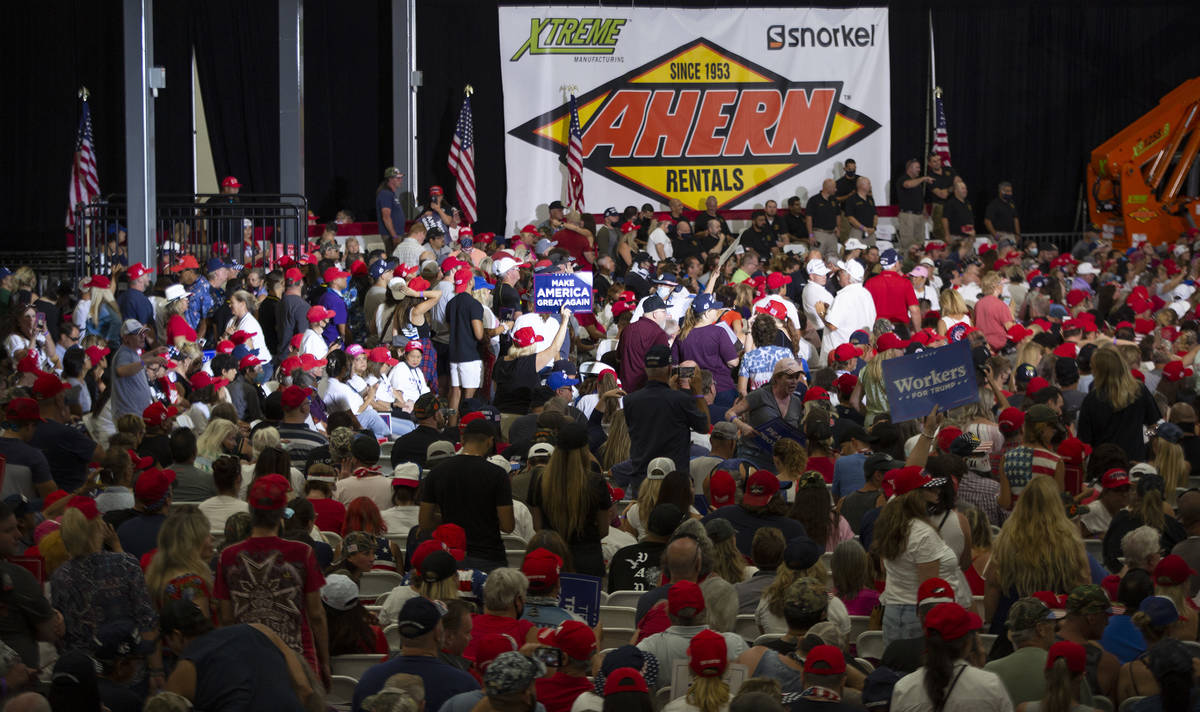 The crowd during a Trump campaign rally at Xtreme Manufacturing on Sunday, Sept. 13, 2020, in Henderson. (Ellen Schmidt/Las Vegas Review-Journal) @ellenkschmidttt 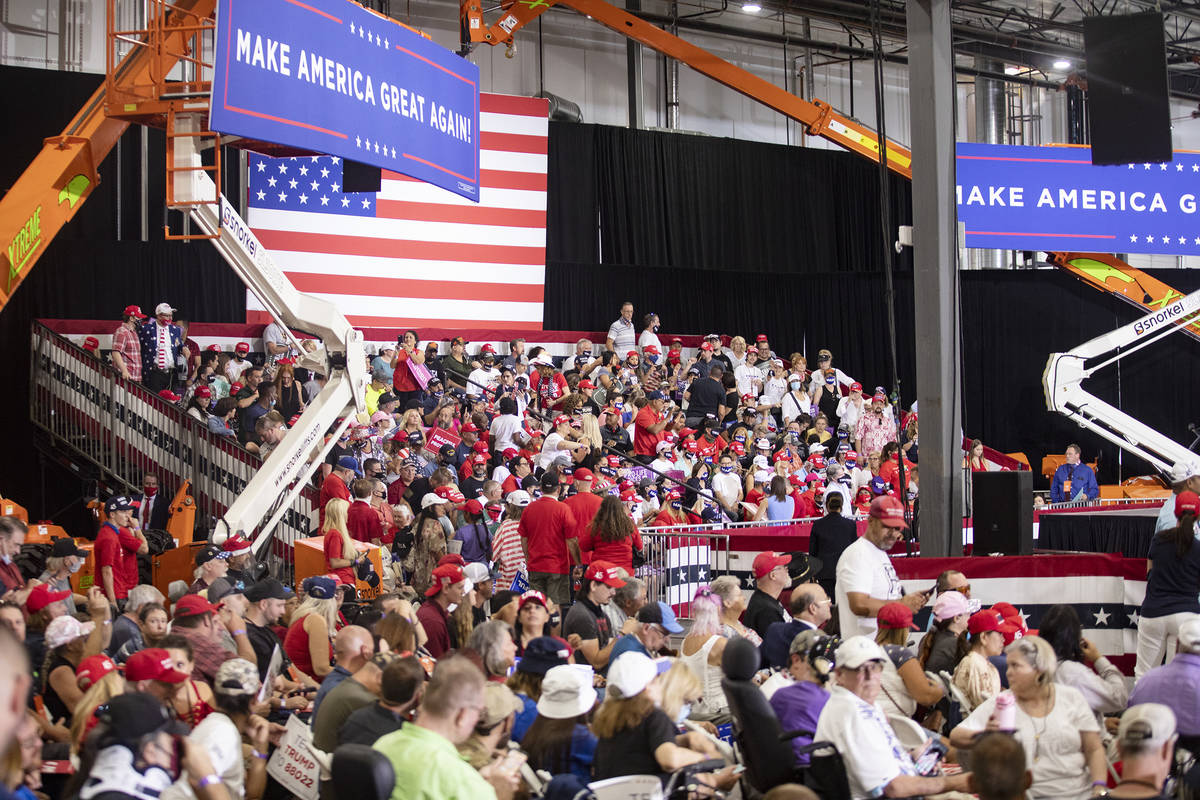 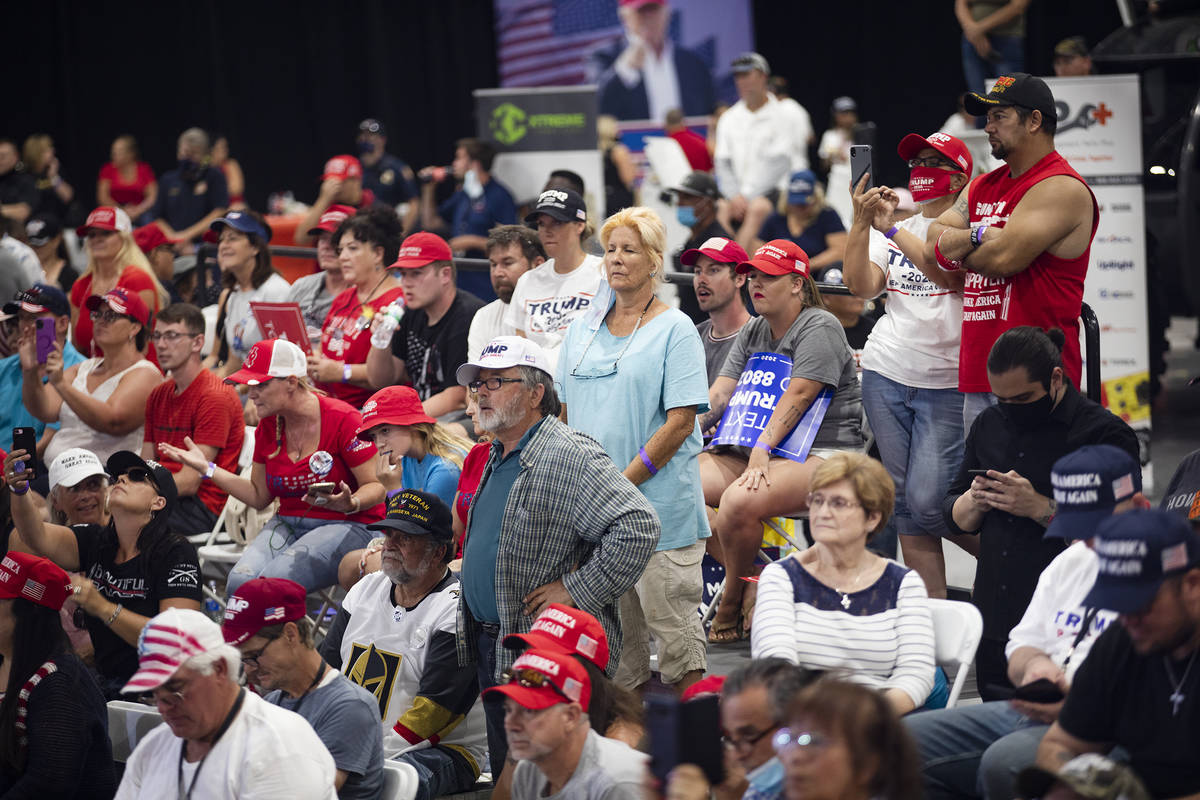 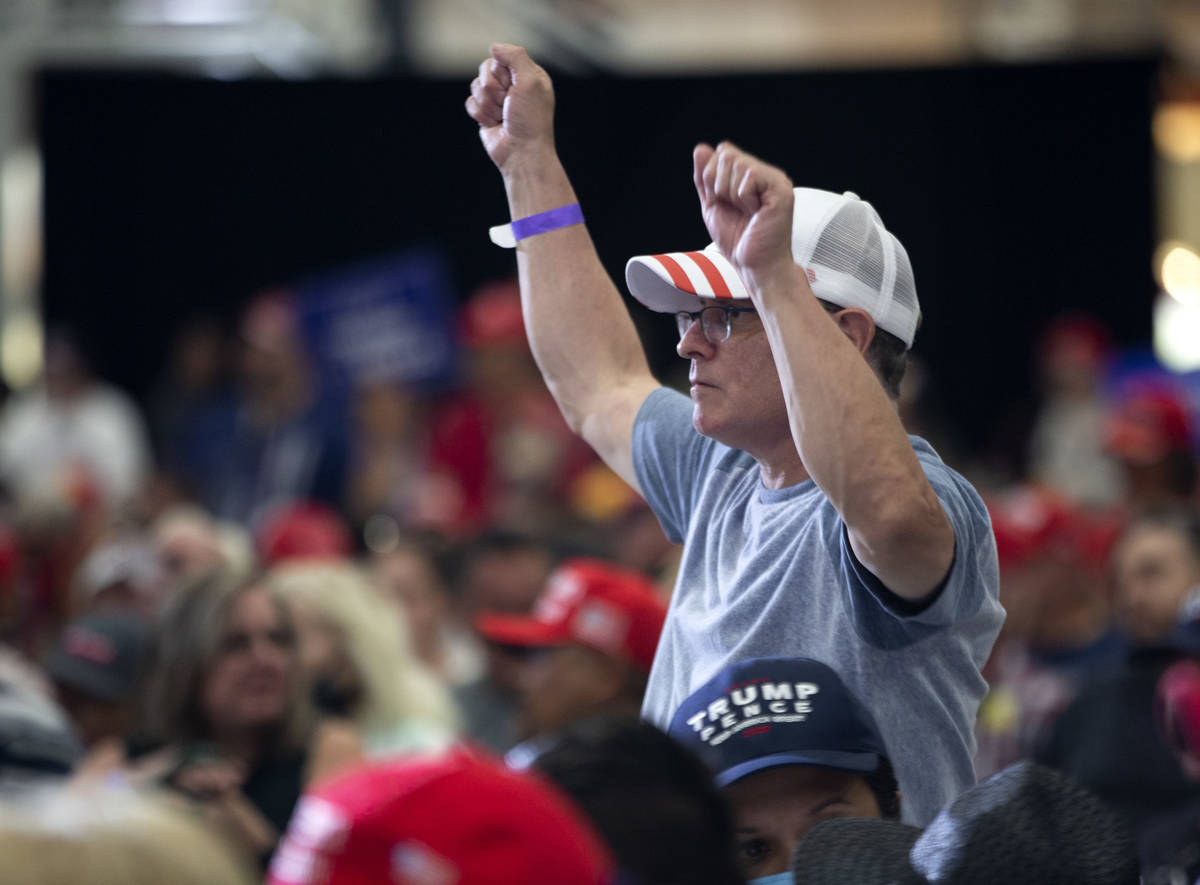 Frank Sollecito of Las Vegas dances to the music in between speakers during a Trump campaign rally at Xtreme Manufacturing on Sunday, Sept. 13, 2020, in Henderson. (Ellen Schmidt/Las Vegas Review-Journal) @ellenkschmidttt 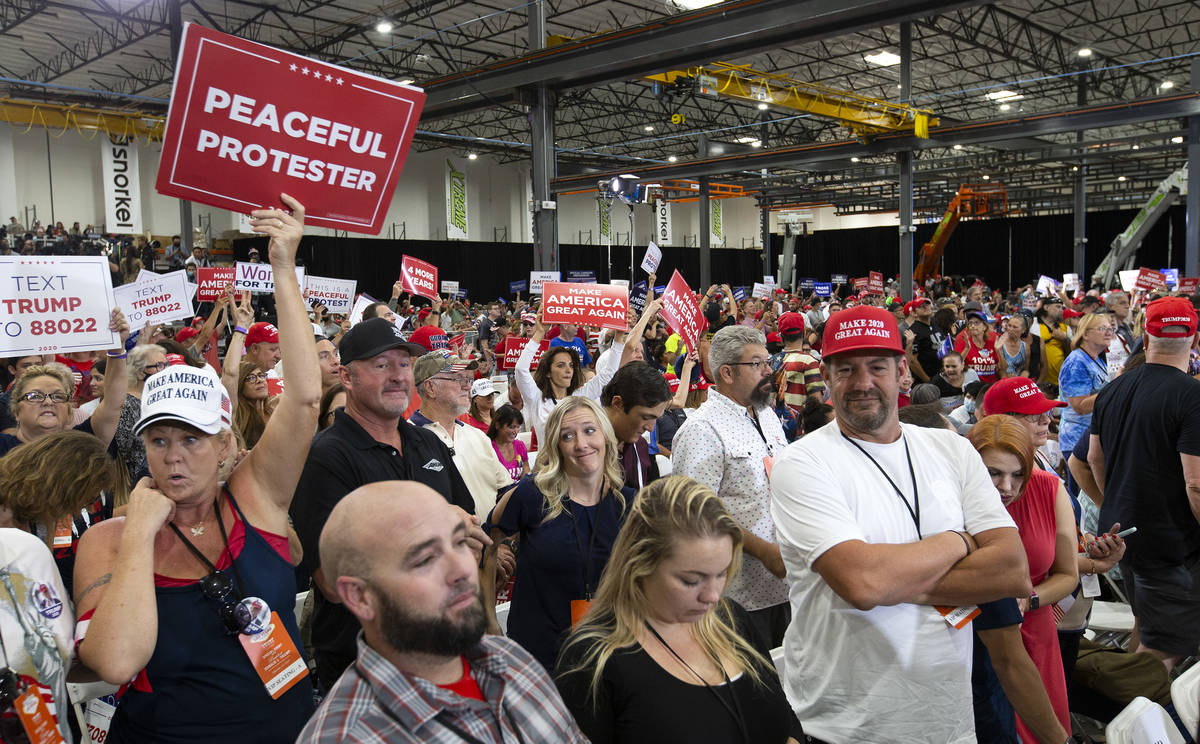 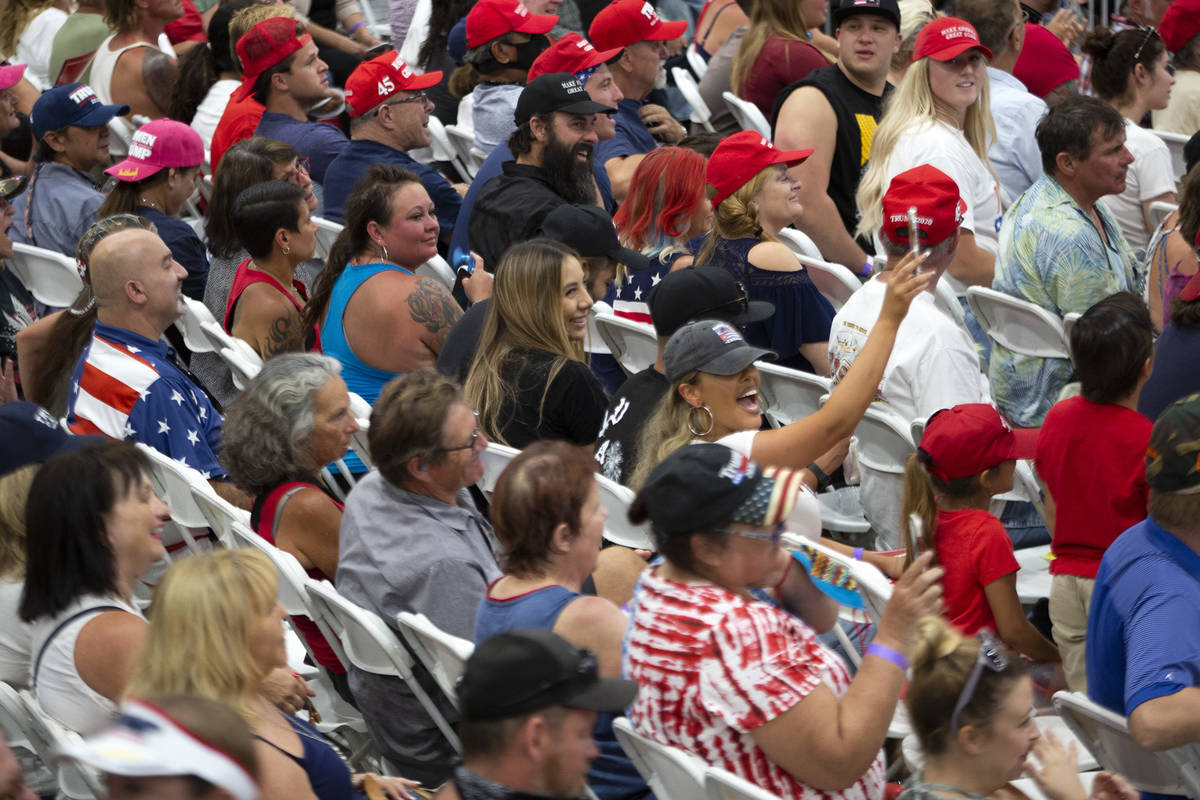 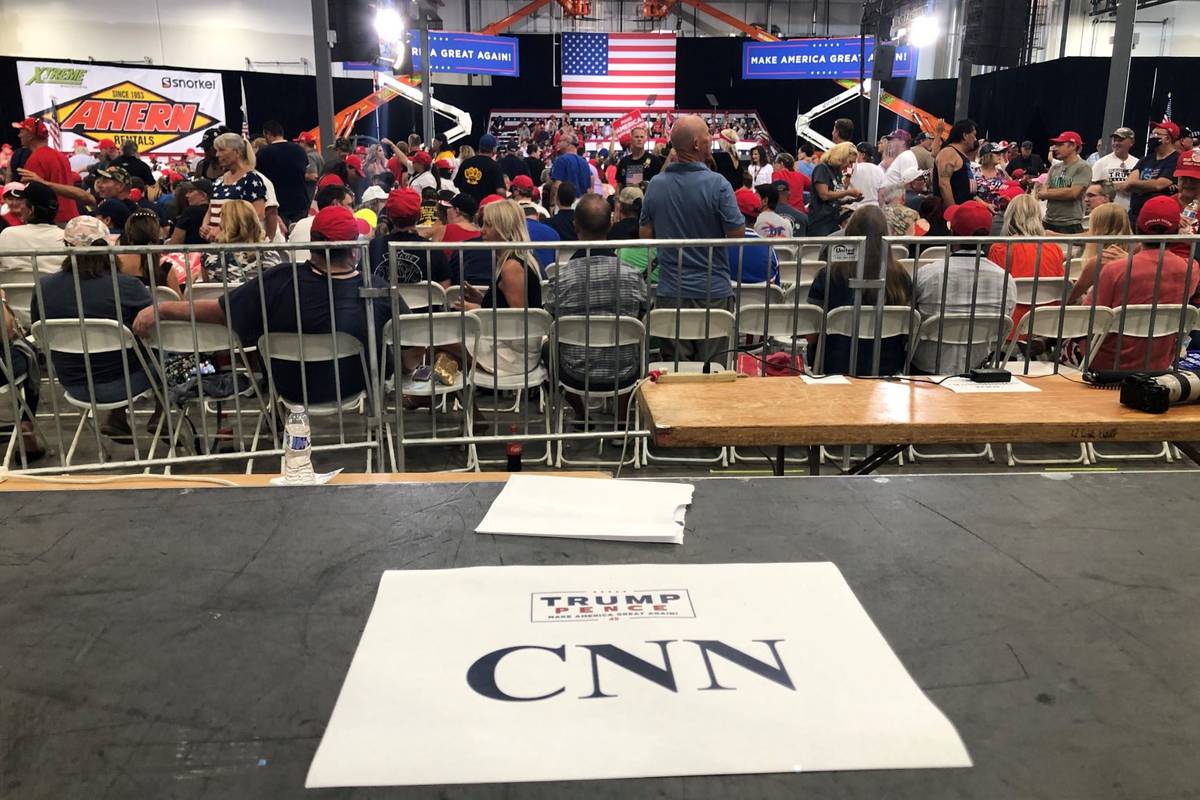 Supporters of President Donald Trump sit in front of an empty CNN media riser before a campaign rally at Xtreme Manufacturing in Henderson on Sunday. (James Schaeffer/Las Vegas Review-Journal) 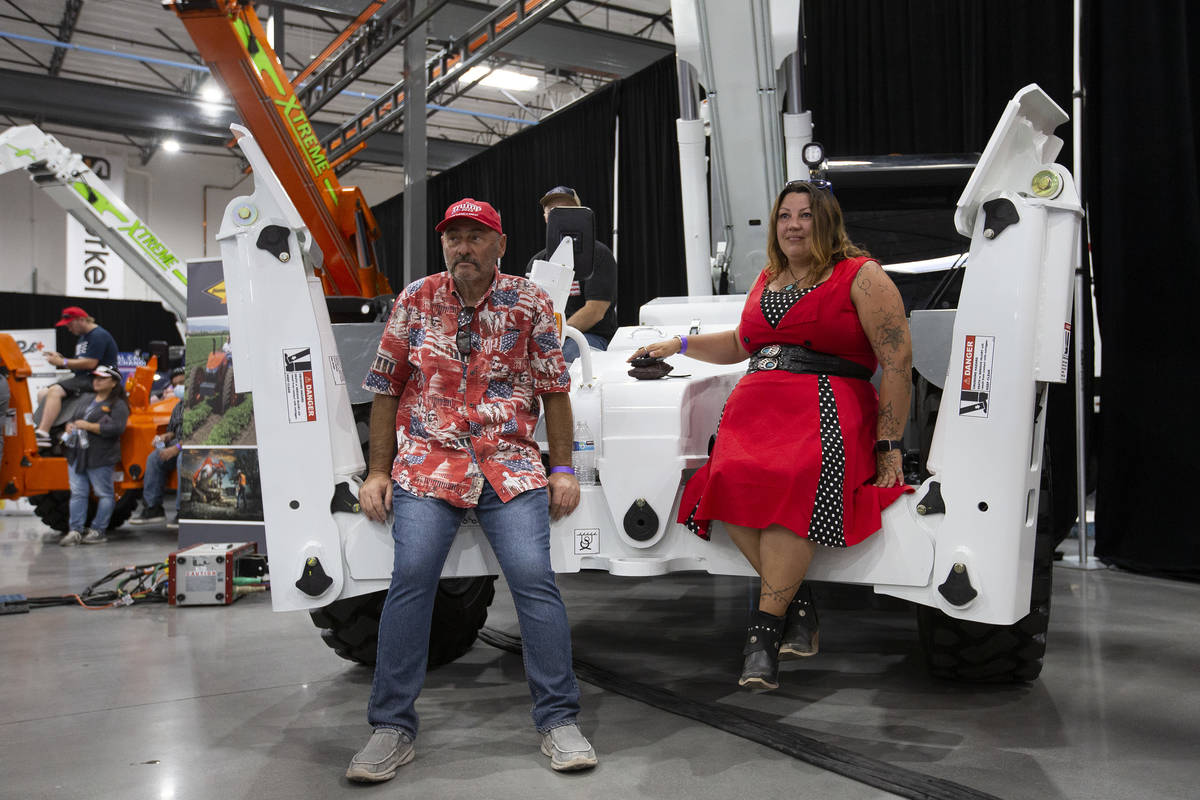 Anthony Greco, vice chair for the Independent American Party, left, and Tiffany Seeback, who is running for the Nevada Senate in District 19, right, watch speakers during a Trump campaign rally at Xtreme Manufacturing on Sunday, Sept. 13, 2020, in Henderson. (Ellen Schmidt/Las Vegas Review-Journal) @ellenkschmidttt 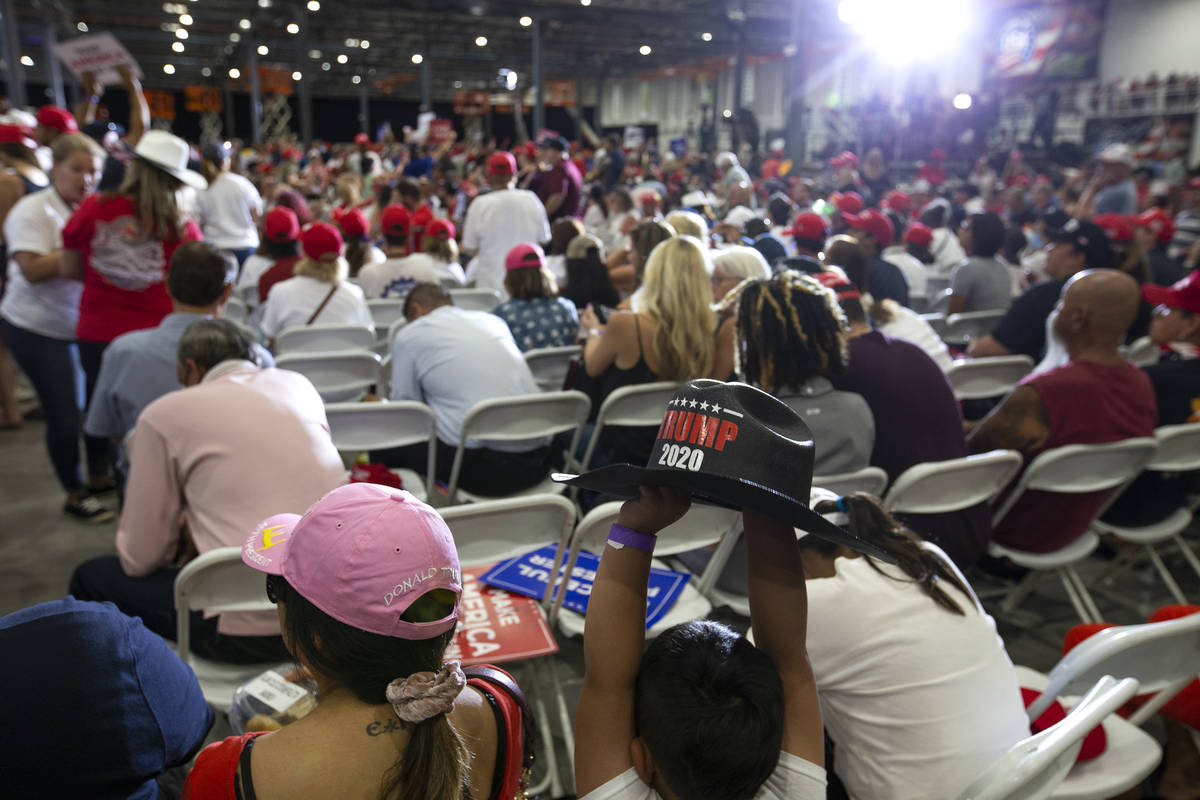 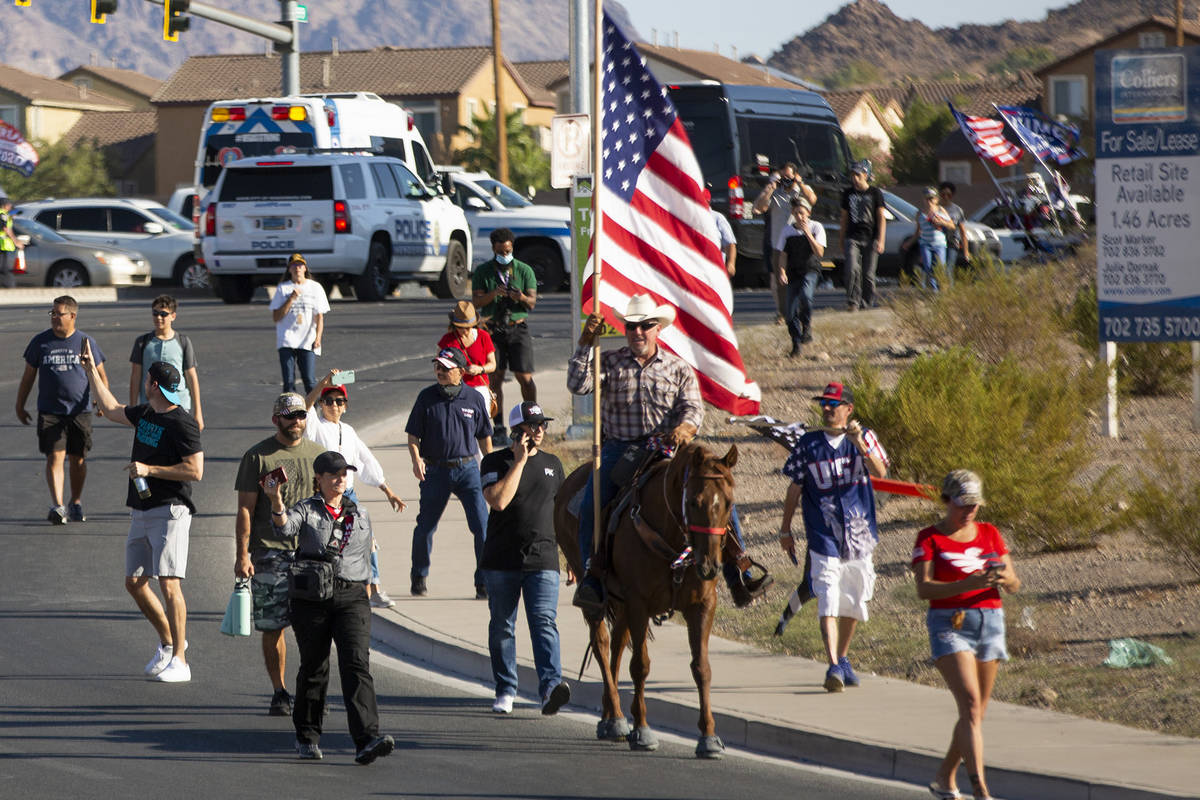 One man rides in on horseback to wait in line for President Donald Trump's campaign rally at Xtreme Manufacturing on Sunday, Sept. 13, 2020, in Henderson. (Ellen Schmidt/Las Vegas Review-Journal) @ellenkschmidttt 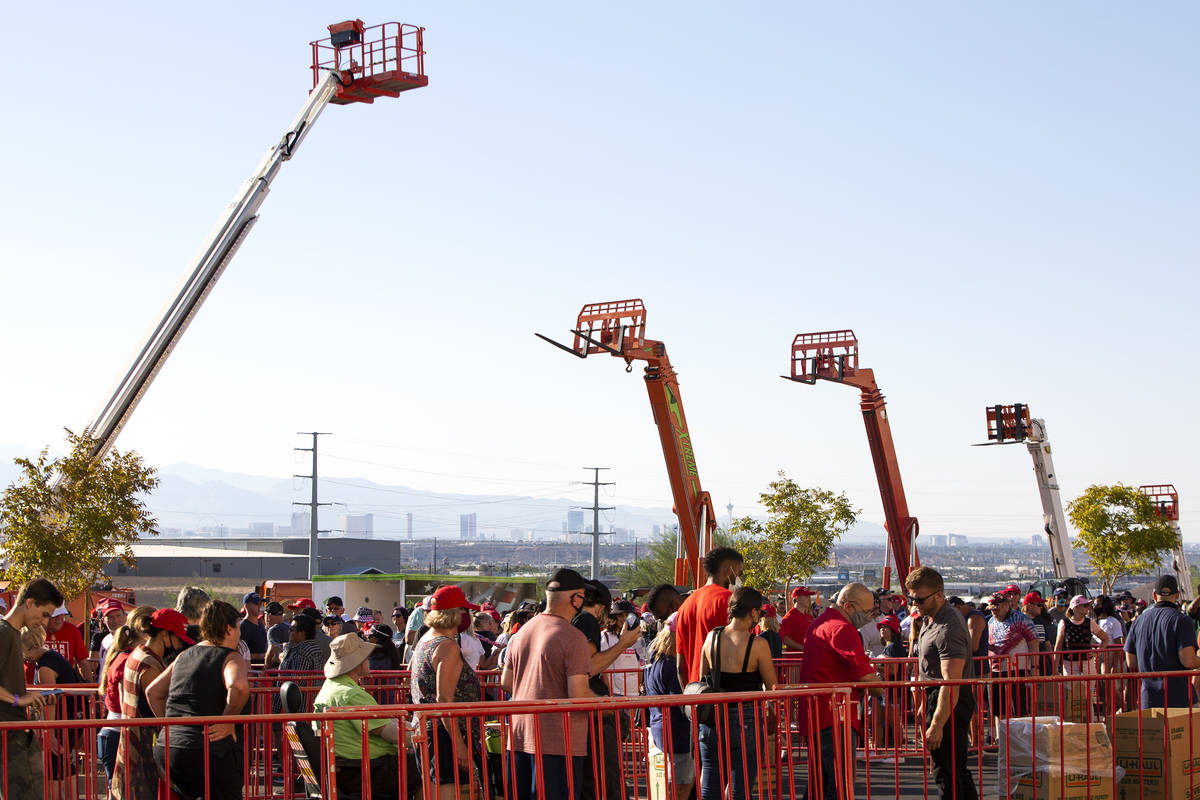 “On Nov. 3, Nevada will decide whether we will quickly return to the record prosperity we experienced before the virus,” Trump said, adding that he expected to win the Silver State on Election Day.

The visit was Trump’s first to the valley since February and drew the ire of Nevada Gov. Steve Sisolak, who accused the president of “taking reckless and selfish actions that are putting the countless lives in danger here in Nevada.”

Sisolak banned in-person gatherings of more than 50 people in an attempt to halt the spread of coronavirus. After initial cancellations at several airport venues, Trump held a rally in Minden on Saturday before holding events in the Las Vegas area Sunday.

In Henderson, Trump delivered a campaign speech focusing on his administration’s strong pre-pandemic economy, efforts to secure the U.S.-Mexican border and support law enforcement and the military.

He stressed that Biden and his fellow Democrats would seek to undo this work, and he spent a considerable amount of the rally attacking Biden’s mental capacity and record.

Some in the crowd wore masks, but the seating and standing areas were not socially distant. The event capped at several thousand attendees, with hundreds more turned away once it reached capacity.

When the president told the crowd that anyone convicted of murdering a police officer should get the death penalty, for example, many leaped to their feet and cheered for several seconds.

A small group of protesters momentarily interrupted the rally but was quickly escorted out by security.

Trump stuck mostly to national issues, but he did touch on Nevada’s economy, saying the state hit record low unemployment during his administration.

He said his administration has saved about half a million Nevada jobs during the pandemic.

Unlike Saturday’s rally, Trump did not spend much time attacking either Sisolak or changes to Nevada’s voting laws.

He called the governor a “political hack” and referenced that he “would be watching” the state’s ballots, but stuck mostly to law and order and anti-Biden talking points.

He also defended his pandemic response, saying that although the virus has killed more than 180,000 Americans, his actions kept the death toll from reaching several million.

Trump’s Republican allies have accused Sisolak without evidence of attempting to shut down the rallies. The governor has maintained he was not involved in earlier decisions made by the airports to cancel at their locations.

Tonight, President Donald Trump is taking reckless and selfish actions that are putting countless lives in danger here in Nevada.

In a statement Sunday, Sisolak stressed that Trump was putting the health of thousands of Nevadans in danger by holding an in-person rally. He noted on social media that the White House’s own coronavirus guidelines recommend restricting public gatherings in Clark County to just 10 people.

“At a time when Nevada is focused on getting our economy back on track and protecting public health, the president’s actions this weekend are shameful, dangerous and irresponsible,” Sisolak said.

Officials with Henderson said Friday that event host Don Ahern had been warned the event would violate the governor’s directive. It is unclear if Ahern was cited Sunday.

“By holding an indoor rally tonight, Trump willfully endangered Nevadans, all so he could spew lies to fan his own ego,” the statement read.

Biden released a statement over the weekend: “President Trump can’t hide from the truth. Months after admitting to misleading the American public about the pandemic, he still has no plan to contain COVID-19, a virus that has killed more than 1,400 Nevadans, afflicted more than 72,000 residents and devastated the livelihoods of hundreds of thousands of workers across the Silver State.”