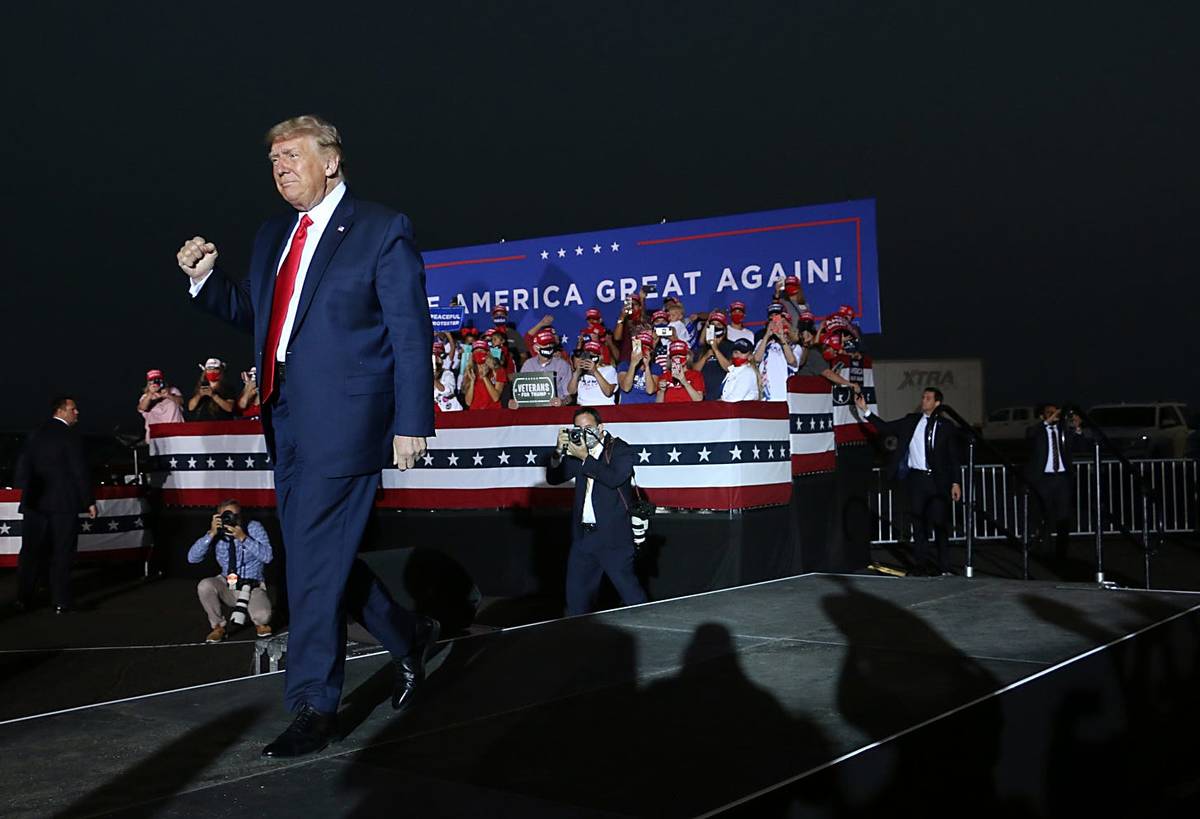 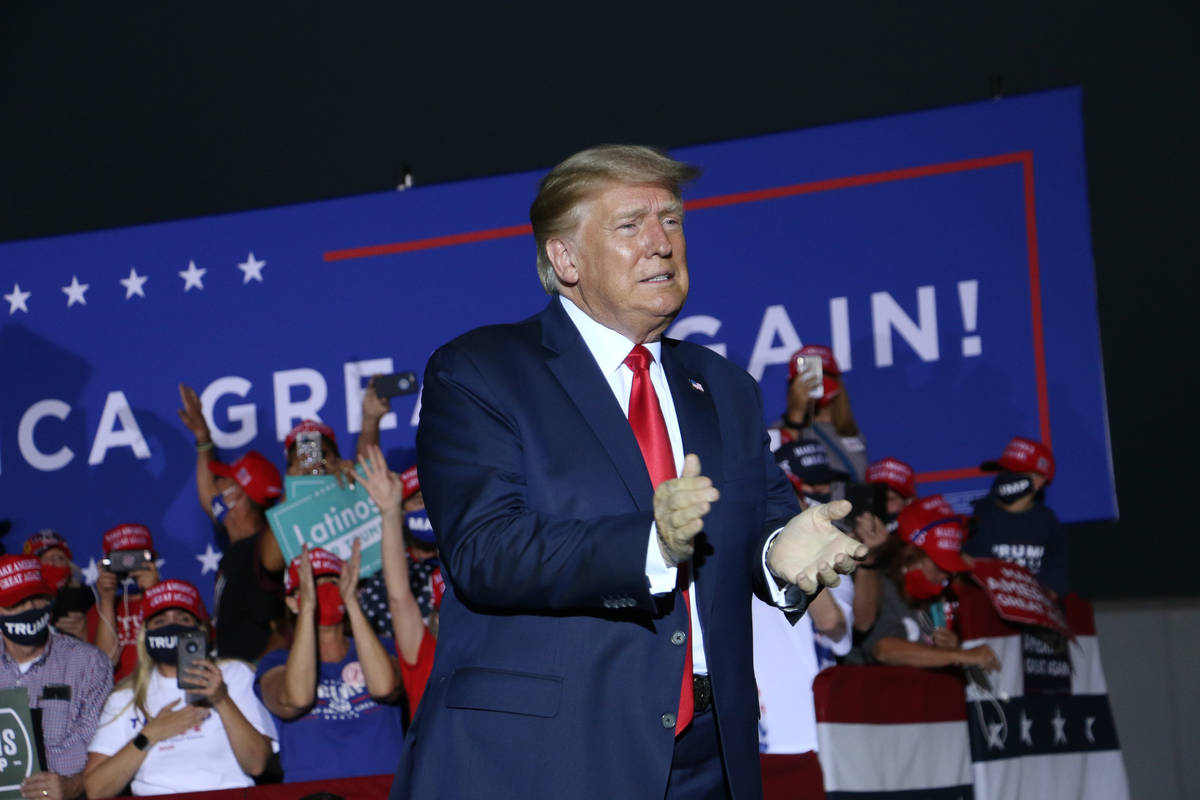 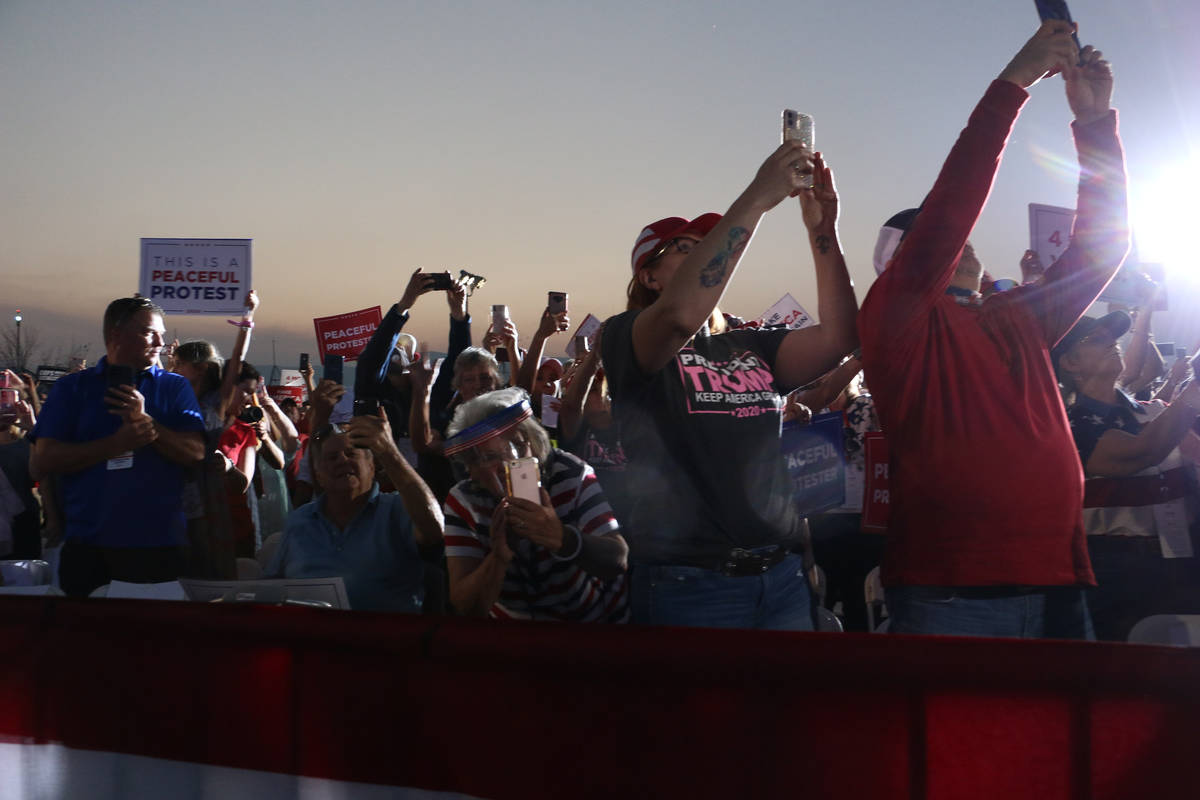 MINDEN — President Donald Trump fired up thousands of supporters at an outdoor event at the airport here with a typical ad-libbed mix of bravado, insults, grievance-airing and record-touting aimed at rallying supporters to the polls in what could be a critical state for him in November.

It was his first visit to Nevada since February — before the state recorded its first coronavirus case, and before a record 128-month economic expansion he hoped would help him clinch a second term hit the wall of a pandemic that threw more than 20 milion Americans out of work and has sickened 6.5 million to date, killing 194,000.

The president arrived shortly after 7 p.m. after a motorcade drive 50 minutes south from Reno-Tahoe International Airport, where the event was originally slated to be held, and spoke for about 90 minutes to an animated crowd in Douglas County, a deeply Republican border county that drew a significant number of attendees from California, all eating up every minute of his remarks.

He accused Gov. Steve Sisolak of trying to block his event, although it was Reno airport officials who stopped it from taking place there, citing restrictions that limit crowd gatherings to 50 people.

He attacked Sisolak and other state Democrats for making the November election here a predominantly mail-in affair, saying the governor was “in control of millions of votes” as a result.

“Here’s a guy calling venues, telling them not to have the rally, calling different venues, don’t have the rally. We’re not going to let you have the rally,” Trump claimed. “And this is the guy that we’re entrusting with millions of ballots? And then we’re supposed to win these states?”

“We didn’t,” Sisolak press secretary Meghin Delaney tweeted shortly after, responding to Trump’s claim of interference. “Emergency directives were put in place to protect the public health of all Nevadans. Whether people or businesses agree with the mitigation measures, those that respect that law and care about our State are following them.”

ON MY WAY — SEE YOU SOON! pic.twitter.com/t7vAElQQt6

The airport event was outdoors, few attendees wore masks, and no social distancing was in evidence. As much as he spoke off the top of his head, the president stuck to a familiar script, attacking and insulting opponent Joe Biden, Barack Obama, Kamala Harris, Hillary Clinton, mail-in voting, the Mueller investigation and the “fake news” media, among other favorite targets.

He customized his remarks for the Nevada audience sparingly, ridiculing a recent poll that has him trailing Biden by 4 points in the state, 46-42, and touting another poll that he said has him performing well with Hispanics, the state’s largest minority group.

He mentioned, inaccurately, that “rioters burned the City Hall in Reno” following a Black Lives Matter protest in the city in May. Fires were ignited during the melee and a car was set ablaze, but not City Hall.

“How did you allow that to happen?” he asked the crowd in jest. “I would have thought you people would have gotten out there.”

And he also referenced Shay Mikalonis, the 29-year-old Las Vegas police officer shot June 1 during the city’s “violent demostrations” by “a left person.”

He touted achievements in office including a revamped trade agreement with Canada and Mexico, pre-pandemic low unemployment and the creation of the Space Force. He also pledged his strong support for the military in the wake of media reports last week that he privately ridiculed soldiers who died in combat as “losers” and “suckers.” Trump has denied making those remarks.

Trump also made more claims about his administration’s response to the COVID-19 pandemic, referring to it as the “China virus.” He promised the crowd his continued support for gun owner rights, conservative Supreme Court nominees, and for police and “law and order,” but did not say much in the way of specific policies and programs he might pursue in a second term.

President Trump took the stage a little before 7:30 pm. pic.twitter.com/IaZUovg8BJ

On to Las Vegas

Trump was expected to fly to Las Vegas, where he will stay overnight in the city before attending a Latinos for Trump roundtable at 10 a.m. Sunday at the Treasure Island hotel-casino, which is owned by his friend Phil Ruffin.

At 7 p.m. Sunday, Trump is scheduled to speak at a Great American Comeback Event at Xtreme Manufacturing in Henderson. Doors for that event open at 4 p.m.

Henderson spokeswoman Kathleen Richards said Friday that the city had issued written and verbal warnings to Xtreme Manufacturing, reminding the company of the restrictions on social gatherings. If the company does violate the rule, it will receive a citation, she said.

Under the current coronavirus restrictions, social gatherings of more than 50 people are prohibited.

Henderson police will be on site for the president’s visit, Richards said, but only to assist the U.S. Secret Service with security. Any enforcement of the coronavirus restrictions would be done by the city’s business license department, Richards said.

Coronavirus rules thwarted the Trump campaign’s initial plans to hold a rally in a private hangar at the Reno-Tahoe International Airport on Saturday.

A similar event was apparently planned at the Cirrus Aviation hangar at McCarran International Airport, but was later canceled.

The conservative Keystone Corporation put out an announcement of a Sunday reception featuring Trump, co-hosted by Carolyn and Don Ahern, at a cost of $2,800 per person to attend.

Ahern is the owner of the Ahern Hotel, which was fined for hosting a large “Evangelicals for Trump” rally last month. He’s also the owner of Xtreme Manufacturing. 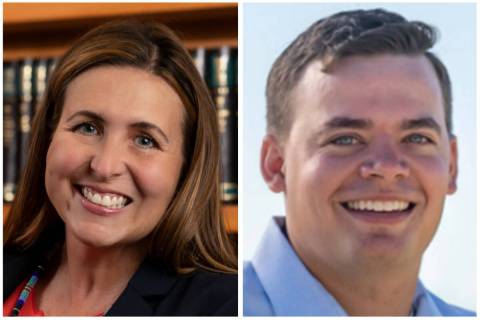 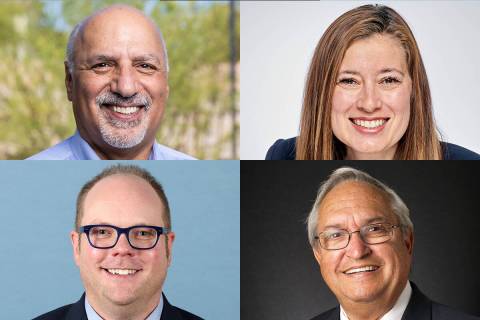