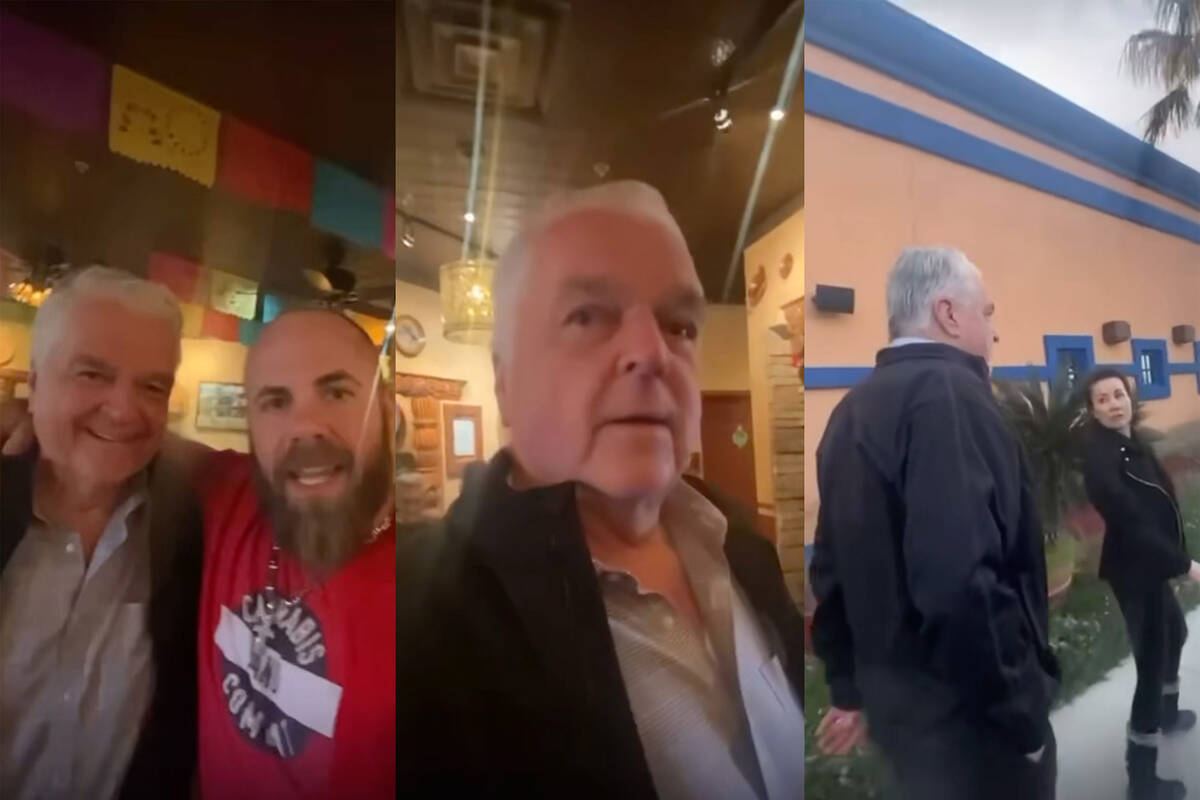 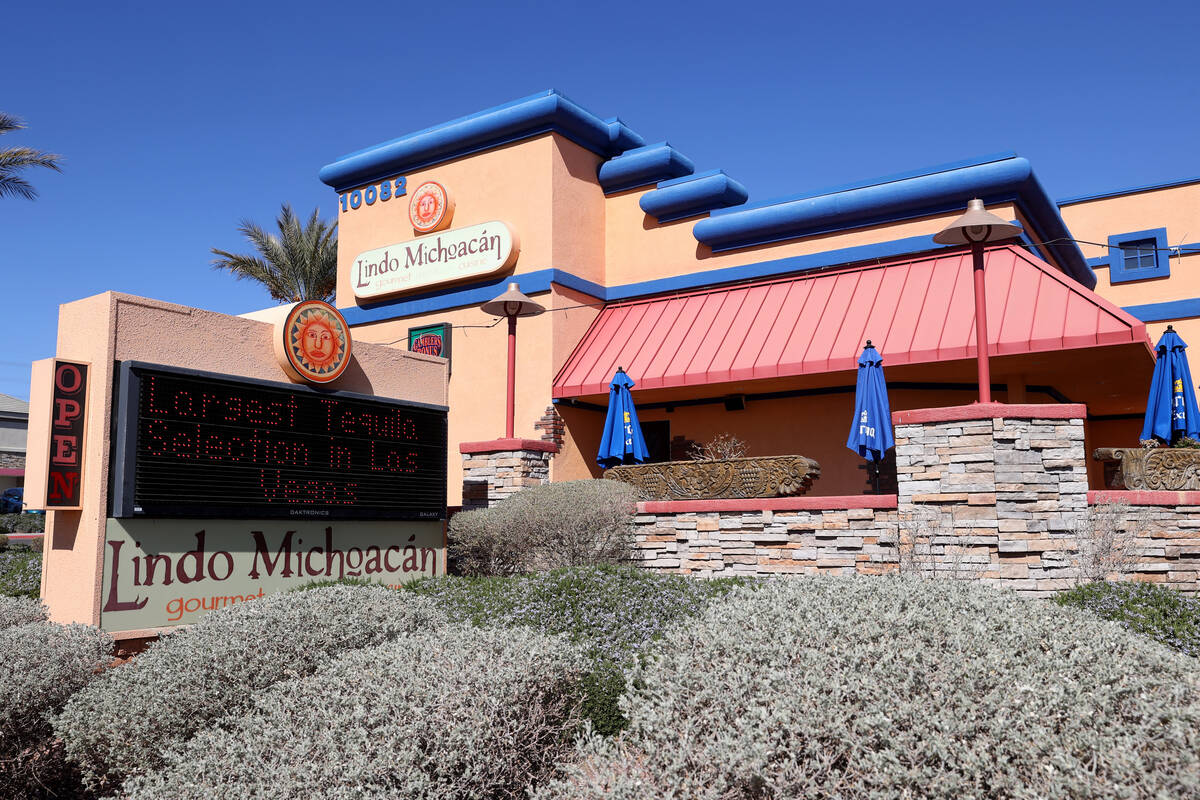 Gov. Steve Sisolak and his wife, Kathy, were accosted and threatened at a Las Vegas restaurant Sunday by at least two men who shouted racial and anti-government epithets at them in an incident captured on a cellphone video.

The governor released a statement Monday decrying the incident but declined additional comment, noting it was under investigation by state police. The governor was without his security detail at the time he was confronted.

A minute-long video, sent to news outlets and posted on social media, shows the encounter at a restaurant identified as Lindo Michoacan in Summerlin. It begins with a man appearing to want a selfie with the governor before unleashing a stream of profanities at him.

“Sorry to hear that,” Sisolak says, stepping away.

The oral assault continues as the man and at least one other follow the governor through the restaurant and outside as the Sisolaks leave.

A statement from the governor’s office Monday said Sisolak had arrived Sunday at the restaurant for dinner with his wife and a daughter when he “was approached by a customer in the establishment who asked to take a photo with him. The Governor often greets Nevadans in public with a quick handshake, conversation or a picture — talking to Nevadans is one of the Governor’s favorite parts of his job.”

The governor was “deeply disappointed in how this incident unfolded, particularly with the language used to talk about First Lady Kathy Sisolak’s heritage. We can disagree about the issues, but the personal attacks and threats are unwarranted, unwelcome and unbecoming behavior for Nevadans.”

The man in the video has been identified through social media as Justin Andersch, a self-described “digital creator” whose website and podcast promote extreme-right, anti-government conspiracy theories. A second video posted to social media, taken from the table where Andersch was sitting in the restaurant, shows him rising from the table to approach the governor.

“Sisolak, right?” the man says. “This is amazing.”

“Right,” the governor responds, posing for the photo before the encounter takes a bad turn.

The man identified as Andersch continues to scream threats and profanities at the governor and his wife as they leave.

“You’re in here without security?” he shouts. “I’m surprised you have the balls to be out here in public, punk.”

The altercation continues outside and the language becomes more threatening, with a second man joining in.

“You running into a patriot now. Huh? Huh?” the first man says.

“The Governor works on behalf of all Nevadans — even those who disagree with him — and he will continue to do so,” the governor’s statement concluded. “He appreciates the professionalism shown by the restaurant employees and looks forward to continuing to support Nevada’s small businesses and their employees.”

Nevada State Police spokeswoman Kim Yoko Smith said the agency “is aware of the incident and has opened an investigation. Due to the ongoing status of the investigation, further information cannot be provided at this time.”

A former prosecutor who viewed video of the altercation told the Review-Journal that the behavior towards the governor could be criminally prosecuted as a misdemeanor under the state’s harassment statute.

“Based upon my review of the video, it appears the individual’s threats to Governor Sisolak rise to the level of criminal conduct,” former Clark County District Attorney David Roger said. The harassment statute, he said, “prohibits a person from threatening to cause bodily injury to a person if the victim reasonably believes that the threat will be carried out.”

Reaction condemning the altercation came swiftly Monday, but not without political overtones.

“Completely unacceptable!” Attorney General Aaron Ford wrote on Twitter. “We all should denounce this verbal attack and racist diatribe against the Governor and First Lady. Thankfully no violence ensued. Real patriots don’t act like this, and anyone perpetrating these actions should be held accountable.”

Nevada Republican Party Chairman Michael McDonald said: “There is no place for the behavior and violent threats against the Governor we saw on that video from this weekend.”

But he compared the incident to California Democratic Congresswoman Maxine Waters’ calling on supporters in 2018 to confront members of the Trump administration over the administration’s border policy.

“Hell no I do not condemn it,” he wrote on Facebook. “You earned it Steve. You absolutely earned it.”

Another GOP candidate, Clark County Sheriff Joe Lombardo, said he understood “the frustration with Governor Sisolak and his left-wing policies” but added, “no one deserves to be accosted while trying to enjoy a peaceful meal with their family. Hateful verbal abuse and violent threats have no place in our political system.”

A Republican running to succeed Lombardo as sheriff, Las Vegas Assemblyman Tom Roberts, said the conduct was “reprehensible and has no place in Nevada.”

“This is a lesson to everyone that we’ve gone too far when full-time security is needed for the Governor and his wife,” Roberts said in a tweet.

“Regardless of any political views, there should always be a line of respect. Especially when families are here,” she said.