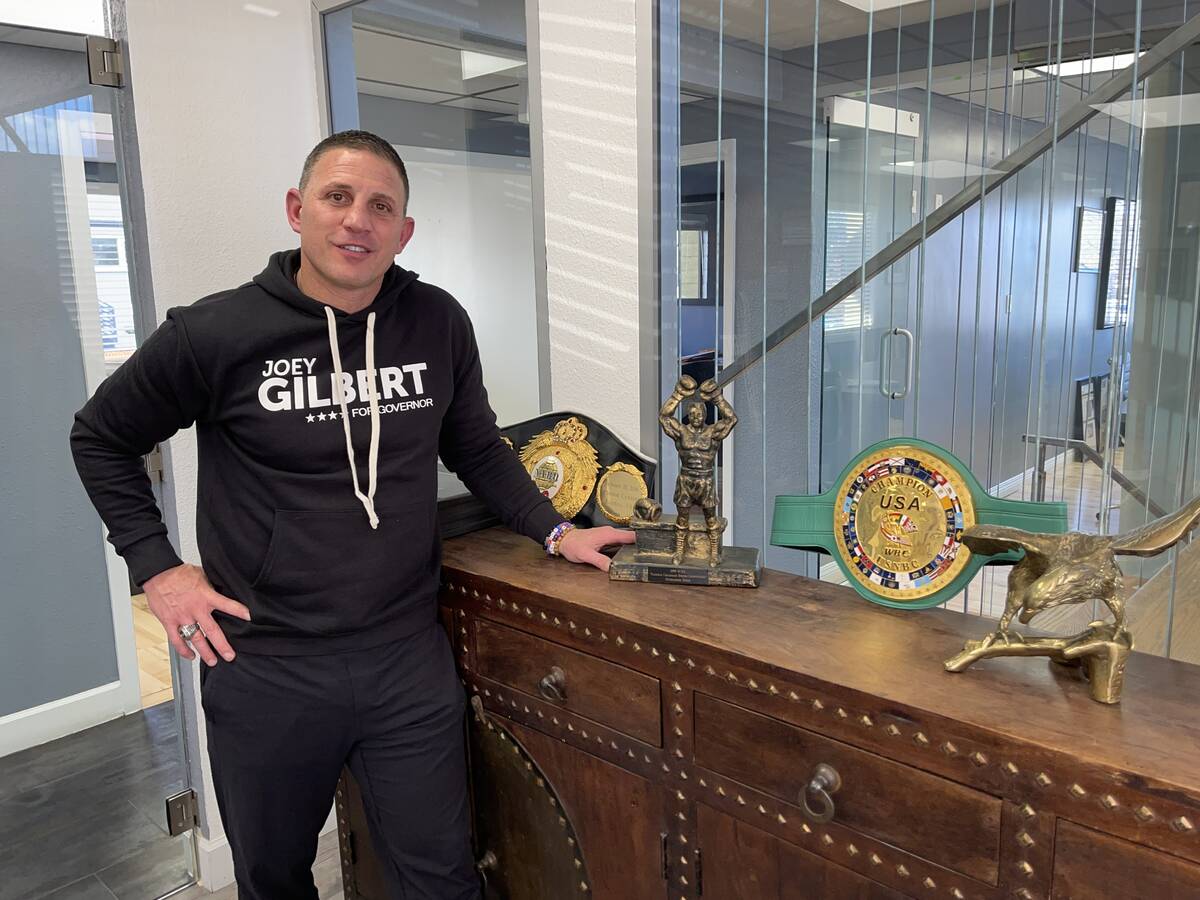 To Joey Gilbert, a Reno criminal trial attorney, former professional boxer and now one of a dozen (and counting) Republican candidates for governor, COVID-19 vaccination shots are still “Fauci ouchies,” masks are “face diapers,” and actions Democratic Gov. Steve Sisolak undertook to fight the pandemic were, and remain, “criminal.”

But while his legal efforts against various pandemic mandates imposed in Nevada starting in March 2020 might have been the catalyst for his decision to make his first run for office, Gilbert says he’s “not the COVID candidate.”

Dressed casually wearing sweatpants and a “Gilbert for Governor” sweatshirt for an interview Wednesday in a conference room at his Reno law office, he continued:

“And so I am that guy. I am the freedom of choice, fight for the people, the people’s champ, truly. Because when people called me this whole last two years, not one time did I pick up the phone and say, ‘Who did you vote for?’ I said, ‘What do you need? How can I help you?’”

Gilbert is one of two farthest-right GOP governor candidates – along with Las Vegas Councilwoman Michele Fiore, whom Gilbert views as a kindred spirit. He says he’s not anti-vax – he received vaccinations in the Air Force and would get a tetanus shot if he had to – but opposes the government deciding what’s permitted and what’s not.

Early in the pandemic, when his parents got COVID, he had researched drug treatments such as hydroxycholorquine, an antimalarial drug that was controversially embraced as a COVID treatment in some quarters but quickly rejected by established health authorities. Undaunted, he urged it on his father, a former Marine Corps combat trauma surgeon, and credits the drug for his parents’ quick recoveries.

Specializing mostly in DUI and drug-related cases, Gilbert in April 2020 represented the state Osteopathic Association in a lawsuit challenging limits on prescribing the drug. The case got tossed in June. He has also filed lawsuits opposing COVID business closures, testing requirements and vaccinating children.

He has worked with Americas Frontline Doctors, a right-wing group that has opposed COVID business closures and vaccines. His one legal victory on the COVID front, with attorney Sigal Chattah, a Republican candidate for attorney general, came on appeal in a December 2020 case challenging attendance limits for churches, following a Supreme Court ruling the month before.

“And that’s when the phone started ringing. People started saying you got to run for governor,” he said. “What COVID did was expose all the problems of our community, of our state.”

Born in Chicago, Gilbert, 45, was adopted and grew up in Sparks, attended local schools and the University of Nevada, Reno, which he had to leave after his first year because he was “partying so hard.” When he returned, he took up boxing, coming to it naturally and fighting in welterweight and middleweight divisions. He became a repeat national and regional champ, a four-time All American, and the 2000 state Golden Gloves champ in his division, compiling a 27-1 amateur record.

He enlisted in the Air Force, earned a law degree from Thomas Jefferson Law School in San Diego and passed the Nevada bar in 2004. Still boxing, that same year he was cast on NBC’s “The Contender,” a reality TV boxing show, where he lost in the quarterfinal round after an accidental head butt ended his fight.

He continued to box and amassed a 20-3-1 professional record that ended with a 2010 loss. His career was not without controversy: He was suspended by the Nevada Athletic Commission after testing positive for a number of illegal substances including steroids, methamphetamine and amphetamine. He later agreed to a settlement where he paid a $10,000 fine for a positive steroid test and a one-year retroactive suspension, with charges for using other illegal substances dropped.

He’s built his law practice around his background as a professional fighter, with billboard ads and other promotions touting him, clenched fists raised, as the “People’s Champ” who will “Fight for You” and — with his campaign now in full swing — “Fight for Nevada.” He’s had some recent disciplinary issues there as well: In December, The Associated Press reported that Gilbert faces a reprimand from the Nevada state bar on grounds that he allowed non-attorney employees to handle a case without his supervision and did not tell the same client, in required timely fashion, that he was dropping his case. He has denied the allegations. A May hearing is scheduled.

‘Trump from the jump’

Gilbert has been outspoken and consistent in his support for former President Donald Trump, and his belief that President Joe Biden did not legitimately win the 2020 election.

“When I say Trump from the jump, I just mean while everybody else was deciding, I said, ‘This is the guy.’ I got behind him,” he said. “Have there been a few things here and there that he said over time where I wanted to climb under the desk?… You know, sometimes it could have been said better, or perhaps not at all. But again, that’s who he is.”

Gilbert was in Washington, D.C., the day of the Jan. 6 Capitol riot, but for a different event to speak on “medical tyranny,” although he found himself on the Capitol steps in the middle of the melee.

“I wasn’t at the Stop the Steal rally,” he said. “But I was definitely on the Capitol steps. I don’t wanna mislead anybody. I’m proud to have been there. We’re standing up for this country stand up for our constitutional republic.”

He said he did not “support anybody that went in there and did anything violent.” Nor did he think there was any point to trying to stop the electoral vote count in Congress certifying Biden’s victory.

“I was there to support the fact that I thought our elections were not fair and that Trump got screwed, and that was that,” he said. “I didn’t think anything could be changed, quite frankly. No one sent me that memo.”

Issues in the race

Though he’s never held public office, Gilbert believes he’s “the only candidate that’s truly prepared and ready to lead on Day 1,” and said he’s learned the issues, and how to fix them, from travels across the state during the COVID crisis.

“You go across the 17 counties, you’re gonna hear five of the top things that pop everywhere,” he said. No. 1 is the economy, which he said was dragged down by “the COVID insanity” of mandates and closures.

Next is “broken” schools, with election integrity, crime and law enforcement. Then comes immigration and “sanctuary cities,” with gun ownership rights and water and power concerns – he supports modular nuclear power – on the list as well.

On voting, “I do think there was election issues across this country, and definitely in the six swing states. I’ll stand behind that, I don’t think Biden was duly elected.” He says he supports ending Nevada’s 2020 switch to universal mail-in ballots, requiring voter ID, and returning to paper ballots exclusively.

He portrays the crowded Republican race as a contest primarily between himself and Clark County Sheriff Joe Lombardo — the apparent front runner in polls and fundraising — describing him in typically pugnacious terms as “a joke” and “Sisolak with a badge.”

“And I say that because he’s trying to pretend to be something he’s not,” he said of Lombardo, going on to attack his record as sheriff on crime, immigration enforcement and gun rights. “He’s not a conservative Republican. He’s not even a moderate.”

Reached to respond, the Lombardo campaign said it had no comment.

He is mostly respectful toward the rest of the field but says former U.S. Sen. Dean Heller, another leading candidate, “had his chance.” He is quick to blast Sisolak for his actions during pandemic, accusing him of exceeding his authority to impose a state of emergency, close businesses, enact mask mandates, and limit public gatherings.

His own campaign fundraising, as of January, lagged all but one other Republican candidate, a few of whom made outsized personal loans to their campaigns. Gilbert says he is closing that gap with grassroots fundraising efforts via his website, and says he has a large team of volunteers — hundreds strong in Las Vegas, where he spends half his time — helping with his campaign. He filed officially to run for governor on Friday.

A single parent to an 11-year-old daughter, he frequently returned during the interview to the subject of schools and education, and questions about student literacy, substance abuse, absenteeism, school violence and discipline, and the role of teachers and coaches in the lives of students, noting his own grounding experience with boxing while in college.

A defense attorney, he says the solution with law enforcement is “untie our cops’ hands” but notes his support for “compassionate care with people that have addiction problems,” for whom prison “is not going to make anything better.”

Near the end of an hourlong interview, he again reviews the top campaign issues and says he has the solutions, energy and passion to address them all.

“And most importantly,” he adds, “I know that I don’t know everything. I don’t have a chip on my shoulder like the rest of these career politicians. I’m gonna bring the smartest businesswomen and businessmen in the country and in the state to work with me. It’s that simple.”