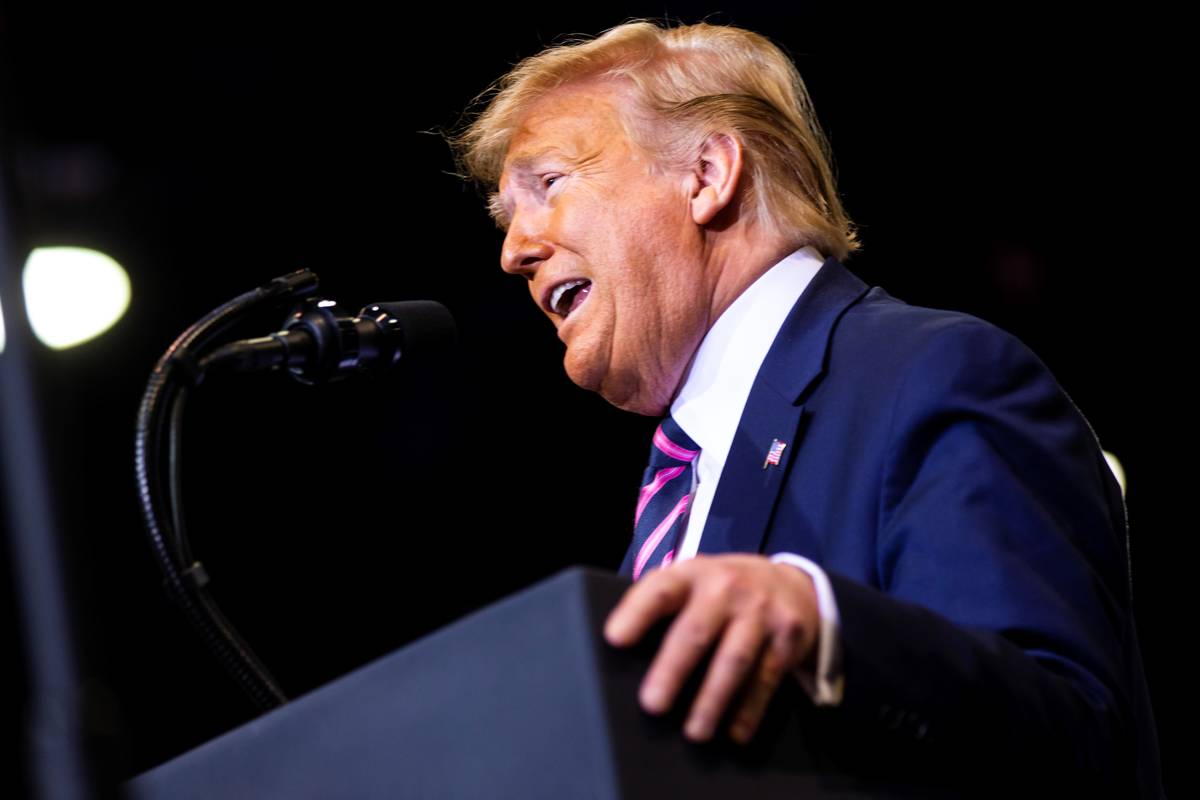 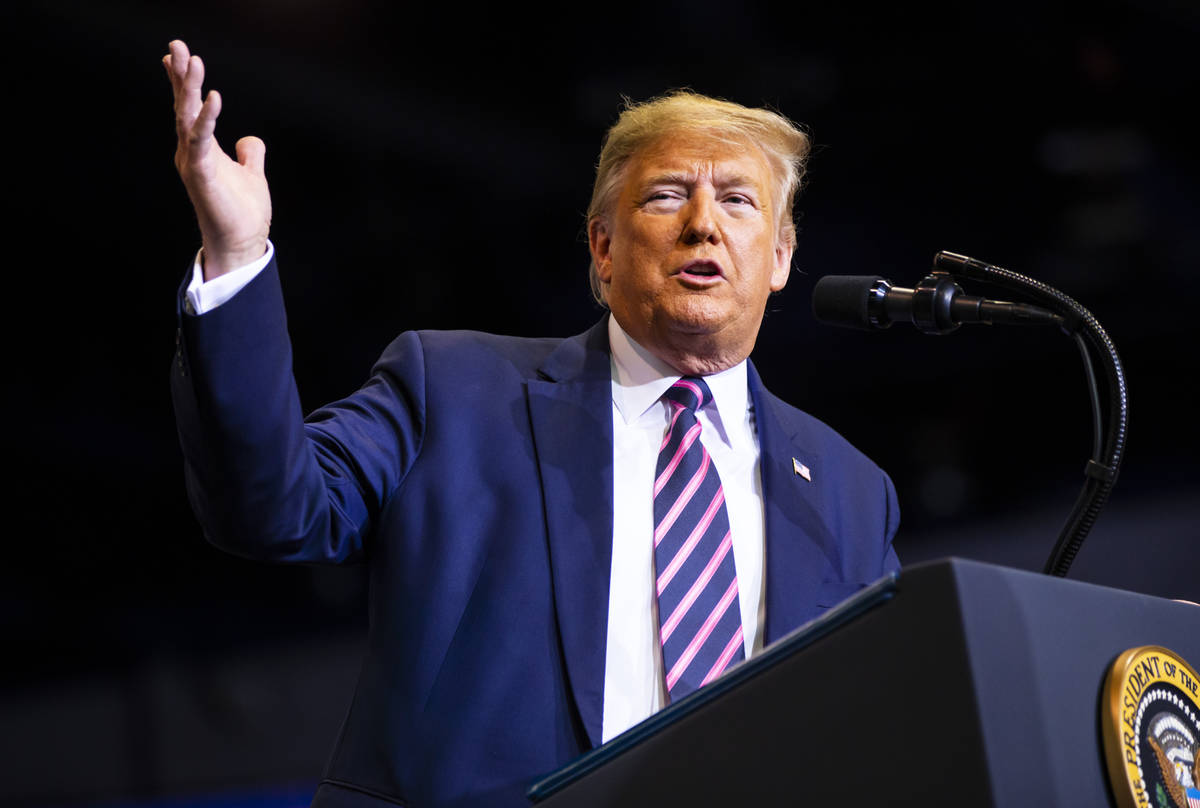 President Donald Trump’s two Nevada rallies planned for this weekend have been canceled because of limitations on public gatherings imposed in the spring by Gov. Steve Sisolak to curb the spread of the coronavirus.

Despite that, however, the Trump campaign said the president still intends to travel to Nevada this weekend, and may yet hold rallies at other locations.

Nevada since late May has been under a governor’s directive limiting the size of public gatherings to 50 people. That raised the earlier limit of 10 the governor imposed in March.

Sisolak’s office on Wednesday issued a statement saying it was not involved in the cancellations.

“The Governor’s Office had no involvement or communication with the event organizers or potential hosts regarding the proposed campaign events advertised by the Trump campaign,” said the statement, issued by Sisolak spokeswoman Meghin Delaney.

“Current statewide emergency directives include mandatory face coverings, limitations on public and private gatherings to no more than 50 people, and other measures to mitigate the spread of COVID-19. The Nevada-specific White House recommendations have consistently included recommendations to limit the size of gatherings for weeks now.”

Despite the gathering size limit, the president announced Nevada visits on Tuesday. Trump was also scheduled to hold a fundraiser during his visit, although details of that event were not public.

The White House itself, however, issues weekly guidance about coronavirus hot spots around the country. In the edition dated Aug. 31, Clark County is listed as a red zone, and Washoe County as yellow. According to the document, social gatherings in red zones should be limited to no more than 10 people, and in the yellow zones, no more than 25 people.

The Trump campaign responded by accusing Democrats of trying to censor the president.

“Democrats are trying to keep President Trump from speaking to voters because they know the enthusiasm behind his re-election campaign cannot be matched by Joe Biden — a historically weak candidate controlled by the radical left who could hold a campaign event in a broom closet,” read the statement issued by Tim Murtaugh, communications director of the president’s re-election campaign.

“The President’s uplifting message of American greatness resonates with people, while everyone knows that Biden is a tool of the radical left who would raise taxes and tank the incredible comeback that is already underway. President Trump will be traveling to Nevada on the dates planned. Additional details will be announced soon.”

In Washington, White House Press Secretary Kayleigh McEnany said, “We believe that if people want to show up and express their political views, that’s their choice to do so.”

“But at the end of the day, if you want to join a peaceful protest, you can do so,” she added. “And there’s no reason just like the protests we’ve seen in the streets, you can’t show up and express your political view at a rally.”

Nevada Republican Party Chairman Michael McDonald said the party is meeting with attorneys and searching for alternative venues to hold rallies. “I’m not going quietly on this,” McDonald said. “The president wants to talk to Nevadans…. He told me this, ‘I want to help Nevadans.’”

Meanwhile, the Reno-Tahoe Airport Authority said the rally would have violated the lease agreements that private tenants signed with the authority.

“This has nothing to do with politics. The letter (to tenants) we sent is about directives and safety and not political campaigns,” said Daren Griffin, president/CEO of the Reno-Tahoe Airport Authority, in a statement. “We would hold our tenants to the same standard whether it was a Democratic or Republican rally or any other type of gathering. We are complying with the Governor’s directive and Washoe County’s recommendation during a pandemic.”

“Our primary mission as a commercial airport is safety,” Griffin said. “We must comply with federal and state laws, directives and regulations regardless of the political season or party.”

A spokesman for McCarran International Airport said the facility was never contacted by Cirrus Aviation, where the Trump rally was set to be held on Sunday.

Nevada Democrats, for their part, criticized Trump for even considering holding rallies during the pandemic.

“The fact that Donald Trump was even considering holding these unsafe events in the midst of a global pandemic is just the latest example of his poor judgment and complete disregard for Nevadans’ public health and safety,” said Madison Mundy, spokeswoman for the Nevada State Democratic Party.

“The state is currently reeling from a pandemic exacerbated by Trump’s disastrous coronavirus response. Limitations on in-person gatherings in Nevada were established to fill the void in leadership created by Trump. Thanks to emergency directives implemented by state leadership, great progress has been made in controlling deadly outbreaks. Trump is only the victim of his own incompetence.”

The scheduling and abrupt cancellation come with the president’s campaign recently moving to put off advertising in the state, and with Trump trailing former Vice President Joe Biden in state polls.

The Trump campaign was slated to begin airing television ads statewide starting Tuesday. But over the last week, it canceled the first week of ads, according to records filed by local TV stations with the Federal Communications Commission. Ads planned to air starting next week are still in place.

The website FiveThirtyEight shows Biden leading by 6.5 percentage points in Nevada in a poll average. The RealClearPolitics website puts Biden’s lead in the poll average at 4 percent.

Adam Laxalt, the co-chairman of Trump’s Nevada effort, was the first to tweet the news of the cancellations.

“Outrageous! @realDonaldTrump rally venues in NV canceled. Welcome to Sisolak’s Nevada — home of partisan political retribution. This is unprecedented — to cancel an incumbent President’s campaign stop inside 60 days of a major contested election in a swing state. This isn’t over!” Laxalt wrote on Twitter Wednesday morning.