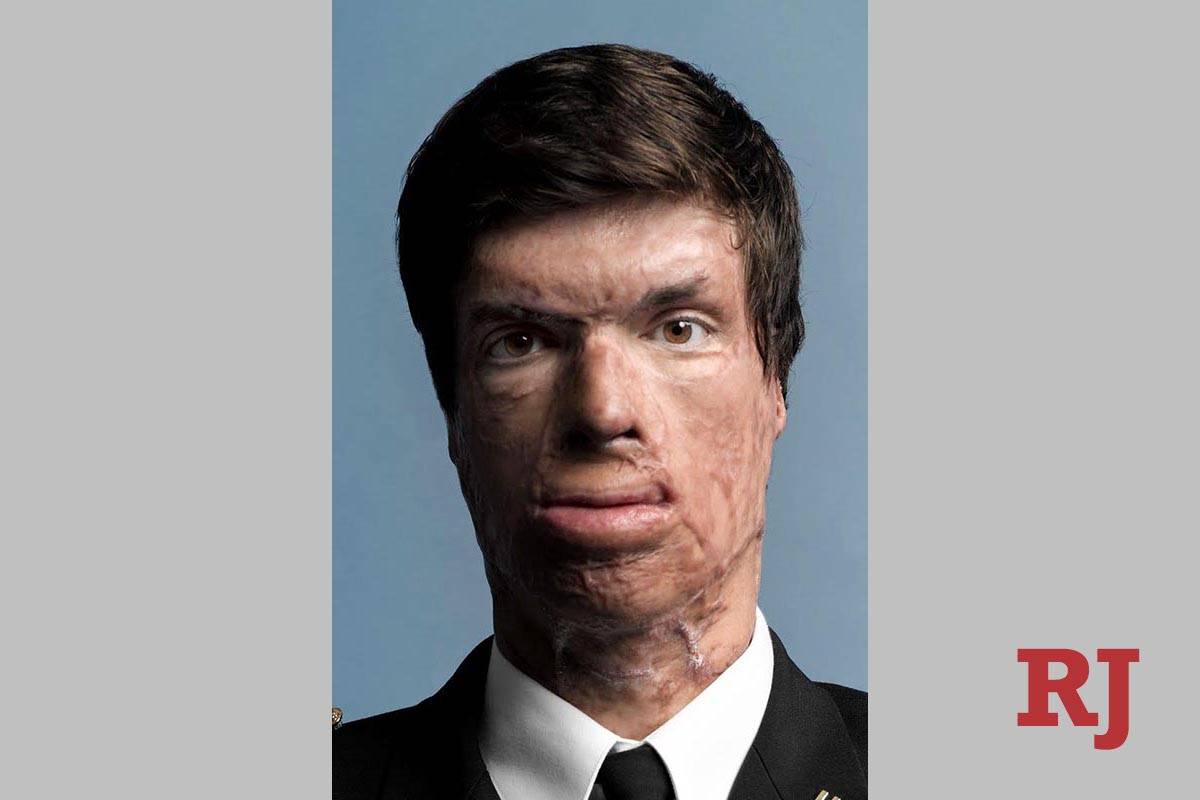 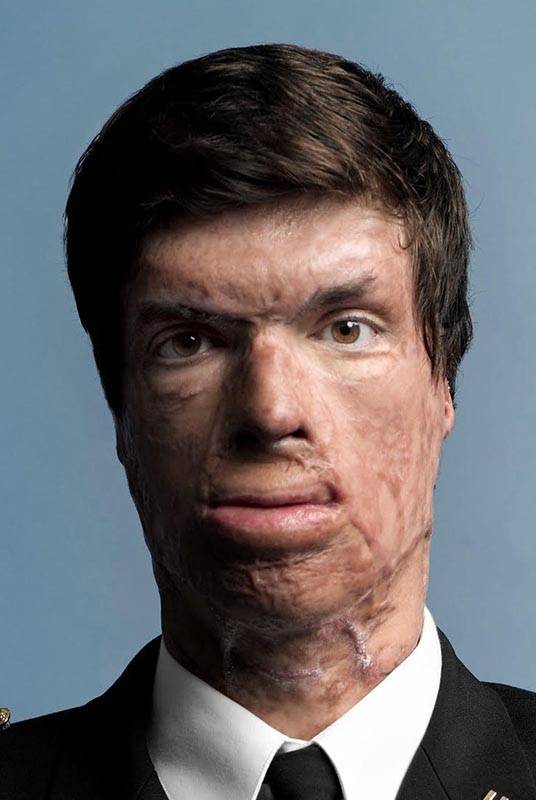 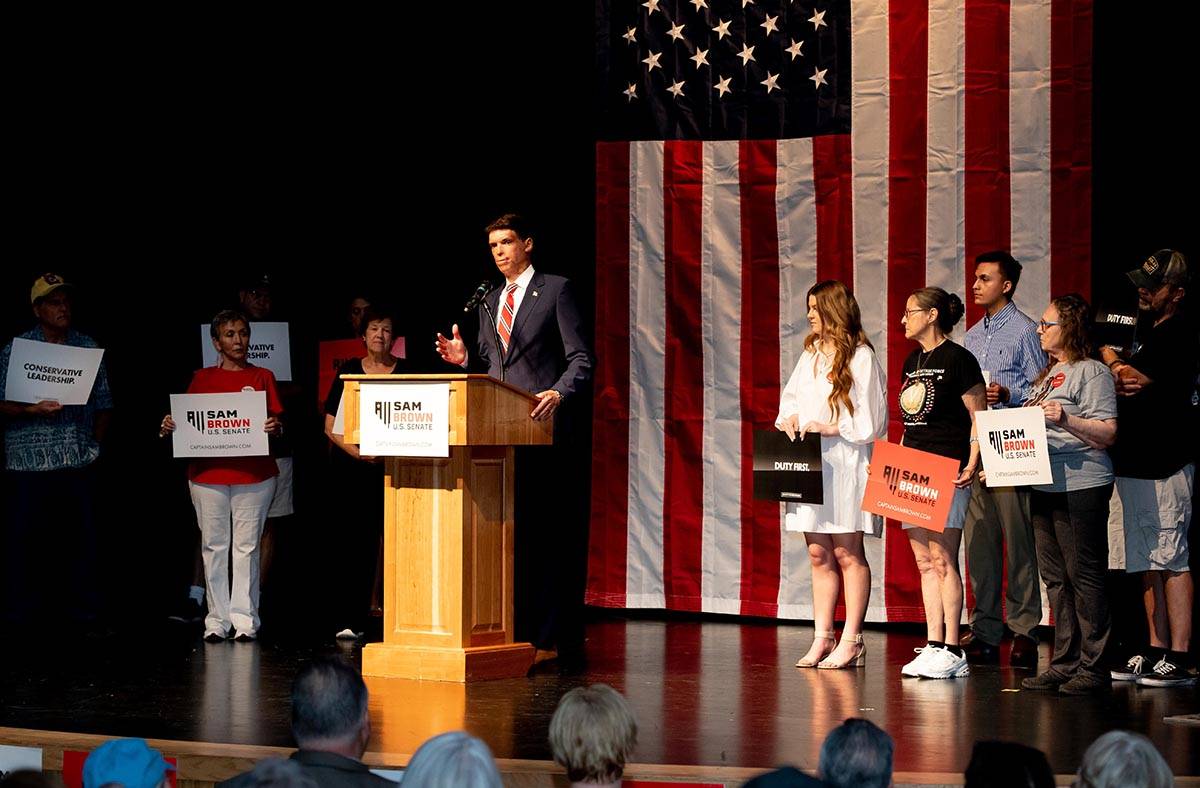 U.S. Senate candidate Sam Brown at the podium in an undated photo. (Sam Brown for Nevada)

Army veteran Sam Brown said he joined the race for U.S. Senate because Nevadans have been ill-represented by “the political class.”

“It’s time for someone of the people, by the people, for the people to take on the establishment,” he told the Las Vegas Review-Journal.

Brown, a Republican and newcomer to Nevada politics, said he opposes the progressive agenda being pushed by President Joe Biden’s administration and Congress. He said the federal government must curtail spending, otherwise lower- and middle-class families will be affected.

He said politics has hindered the country’s ability to be energy-independent, and that Congress allows the executive branch to have too much authority to conduct military operations.

Brown, 37, said Democratic Sen. Catherine Cortez Masto should be replaced because she votes “almost exclusively” in alignment with Democratic leaders, which doesn’t reflect the diverse viewpoints of Nevadans.

In a statement, spokesman Andy Orellana of Nevada Democratic Victory, the state party’s coordinated campaign, said Nevadans know Cortez Masto is focused on making a difference for them.

“She is among the most effective leaders in the Senate because she works across the aisle to get things done for Nevada,” he said. “Earlier this month, she passed a bipartisan infrastructure package that will create thousands of Nevada jobs and includes billions of dollars she secured to combat wildfires, one of the greatest crises facing our state.”

Before he can take on Cortez Masto in the general election, Brown will have to defeat former Nevada Attorney General Adam Laxalt, small-business owner Sharelle Mendenhall and health care executive and U.S. Air Force veteran Bill Hockstedler in the Republican primary.

Laxalt has the benefit of an early endorsement from former President Donald Trump, who put his support behind Laxalt last week. Brown is undeterred.

“At the end of the day, Adam Laxalt can have every endorsement he wants, but the only endorsement I’m looking for is the vote of Nevadans,” Brown said.

Brown said Laxalt’s record includes a loss in the 2018 gubernatorial race that “was widely considered to be one that he should have won” against Democrat Steve Sisolak, and that he will have to explain the loss to voters. Laxalt has attributed that loss to Democratic voters being motivated after the first two years of the Trump presidency.

The former attorney general is now missing an opportunity to elevate other candidates, Brown said.

Without naming anyone, Brown said he is different from other candidates in the primary field because he did not come out of the political class. Instead, he said, he is grounded in the middle class, so he knows the challenges people face.

“At the end of the day, I’m not doing this because I want to be a career politician,” he said. “I’m doing this out of a sense of duty.”

Brown and his family moved from Texas to Reno in 2018 so he could take a job at an Amazon fulfillment center while he got his business off the ground.

He graduated from the U.S. Military Academy at West Point in 2006 and deployed to Afghanistan in 2008. That year, his Humvee hit a roadside bomb, setting him on fire. Three years later, he retired from the military as a captain.

In 2014, Brown ran for office in the Texas Legislature, but lost in the primary. He went back to school, receiving an MBA from Southern Methodist University.

Six months after moving to Nevada, he transitioned from working at Amazon to running a business processing pharmacy claims for veterans.

In 2020, Brown was a volunteer for the Trump campaign’s effort to get out the vote.

Asked twice whether he thought there was widespread voter fraud in the 2020 election, Brown did not provide a clear answer.

“That’s not something that I want to focus on,” he said. “That’s, once again, going back to events that are behind us, and what I want to do is look forward.”

Despite lawsuits filed in Nevada and other states, no evidence has come to light to support claims of massive fraud in the 2020 election. Republican Secretary of State Barbara Cegavske says the election results are accurate, and her office investigated claims but found no evidence of widespread fraud in the state.

He said people face bigger problems than election processes and results, such as struggling to pay their rent or fill up their cars at the pump as gas prices have risen in recent days.