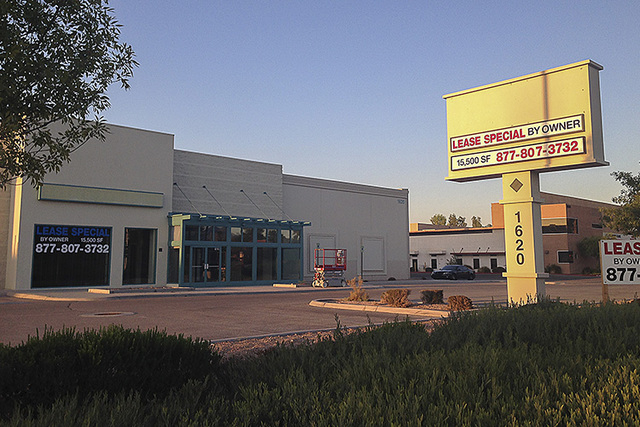 A proposed medical marijuana dispensary in Henderson is within 300 feet of a pediatric clinic, Children's Urgent Care. The applicant is claiming that a pediatric doctor's office is not what was intended to be restricted for a medical marijuana license. (Arnold Knightly/Las Vegas Review-Journal)

A medical marijuana dispensary applicant in Henderson will have to seek relief from the City Council to open in its chosen location in what is one of the first-known zoning appeals in the new industry.

The Planning Commission on Thursday unanimously affirmed the denial of site suitability for Wellness Connection of Nevada in a decision that was as much about having city lawmakers interpret new regulations as it was upholding city staff findings.

Commission Chairman Michael Campbell said the council should be the one to address any code regulating the new industry because the appeal is a policy matter of the new law.

“This is the very first appeal we’ve had for the medical marijuana,” said Campbell, adding that the council is best-suited to interpret the law’s intention so soon after adoption.

The City Council passed its medical marijuana codes July 1 and received 27 dispensary applications between the filing period of July 7-18. The applications are before the state awaiting approval by Nov. 2.

Wellness Connection filed the appeal Aug. 8 after city zoning denied site suitability for a dispensary at 1620 W. Sunset Road. The July 31 denial said the building was less than 1,000 feet from a public park and within 300 feet of a facility providing services to children, a pediatric dental center.

He argued that the actual measured distance to the developed park area is 1,700 feet and is separated by a natural wetlands area that is still zoned as part of the park but undeveloped.

He also questioned the interpretation of a pediatric dental office being a center or facility providing “recreational opportunities or services to children.”

The state and other municipalities define a child facility as a day care, public park, playground, public swimming pool, church and other similar uses, Hayes said.

“A pediatric dental office does not fall under the definition of a community facility anywhere I could find,” Hayes told the commission.

Assistant City Attorney Sally Galati said the city’s language about a community facility is ambiguous, but the city has always been conservative in its interpretation.

“We had at least one, and possibly two others that were interpreted in this manner,” Galati said. “We chose to interpret this in a very conservative manner when we did so.”

The Planning Commission was not interested in reversing any zoning staff findings despite what Hayes termed as “the clear language” of the statutes.

“We were hoping the Planning Commission would agree with us,” Hayes said. “It appears they chose to elevate this to the City Council.”

A decision on whether the council will have an opportunity to review the denial has not been made, but Hayes said he will visit with all Wellness Connection’s partners to decide on the next move.

Besides appealing to the council, the company could find a new location within five miles without having to go through the full application process again, according to city officials.

But finding an available space in that area could prove to be a challenge. Nineteen of the 27 preliminary applications for dispensaries are north of Wigwam Parkway, with 10 in the Sunset Road corridor, from Green Valley Parkway to just past Boulder Highway.