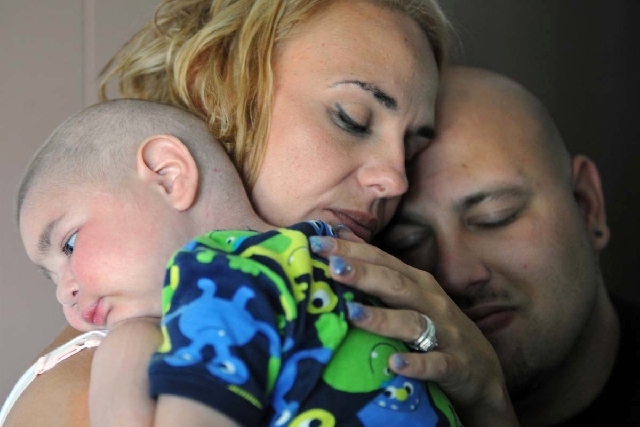 Christine Swidorsky Stevenson holds her son, Logan Stevenson, 2, on July 30 in their Jeannette, Pa., home. At right is her now-husband and Logan's father, Sean Stevenson. The Pennsylvania couple had their dying toddler serve as the best man when they wed on Saturday. Logan died Monday night. 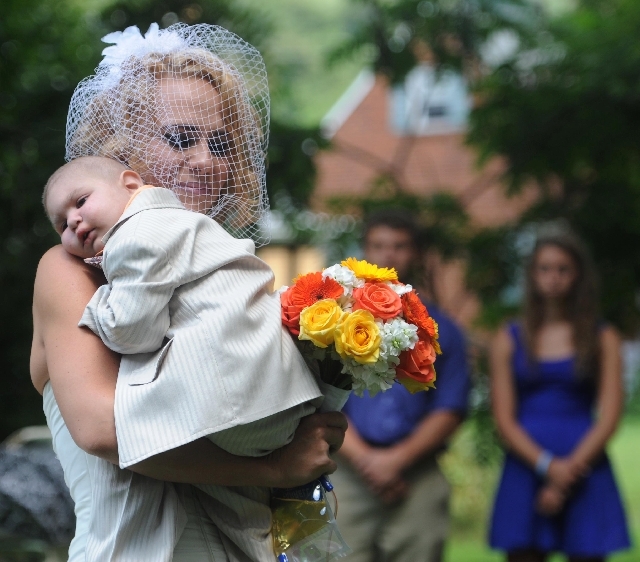 Christine Swidorsky carries her son and the couple's best man, Logan Stevenson, 2, down the aisle to her husband-to-be, Sean Stevenson, during the wedding ceremony on Saturday in Jeannette, Pa. Logan was diagnosed with acute myeloid leukemia and Fanconi anemia. He died Monday night.

PITTSBURGH — A terminally ill 2-year-old western Pennsylvania boy who served as his parents’ best man at their wedding last weekend has died, according to his mother’s Facebook page and a family friend.

Christine Swidorsky Stevenson’s Facebook post said little Logan Stevenson died Monday night in her arms at the home she shared with the boy’s father, her new husband, Sean Stevenson. The couple live in Jeannette, about 25 miles east of Pittsburgh, and were wed Saturday at a ceremony at their home.

The boy, who had leukemia and other complications, was dressed in a tan pinstripe suit and orange shirt for the wedding. His mother carried him on her shoulder, before he stood and was held by his grandmother, Debbie Stevenson, to witness the 12-minute ceremony.

A family spokeswoman, Sylvia Johnson of Youngwood, confirmed Logan’s death for The Associated Press on Tuesday. She later released a brief statement from his parents saying: “Logan passed away at 8:18 yesterday evening, surrounded by his family and loved ones. He was very comfortable.”

His mother said on Facebook, “He is with angels and he’s in no more pain.”

The post indicates the boy’s breathing became labored before his mother called a hospice worker who told the couple he was dying.

“Sean and I held him all day he was comfortable with his medication then at 8:18 my son took his last breath in my arms,” his mother wrote.

She also thanked those who supported the couple during the boy’s illness and wedding plans.

“We love all of u for all your prayers thank u all for caring god bless u all!” she wrote. “And most of all god bless Logan I’ll c u in my dreams my son.”

The Stevensons abandoned an original wedding date of July 2014 after learning from doctors late last month that their son had two to three weeks to live. The couple wanted Logan to see them marry and to be part of family photos.

Logan, who was born Oct. 22, 2010, was diagnosed shortly after his first birthday with acute myeloid leukemia. He had Fanconi anemia, a rare disease that often leads to cancer.

He underwent a stem cell transplant in July 2012. Last March, he had surgery to remove a kidney ravaged by a tumor.

During a trip to Disney World in June, Logan fell ill. He was hospitalized in Florida before he was flown back to Pittsburgh.

During a trip to the emergency room last month, a test revealed a mass in his remaining kidney, which led to his terminal prognosis.

The boy’s parents kept him at home in his final days, after doctors told them he’d likely be more comfortable there, provided he was properly medicated.