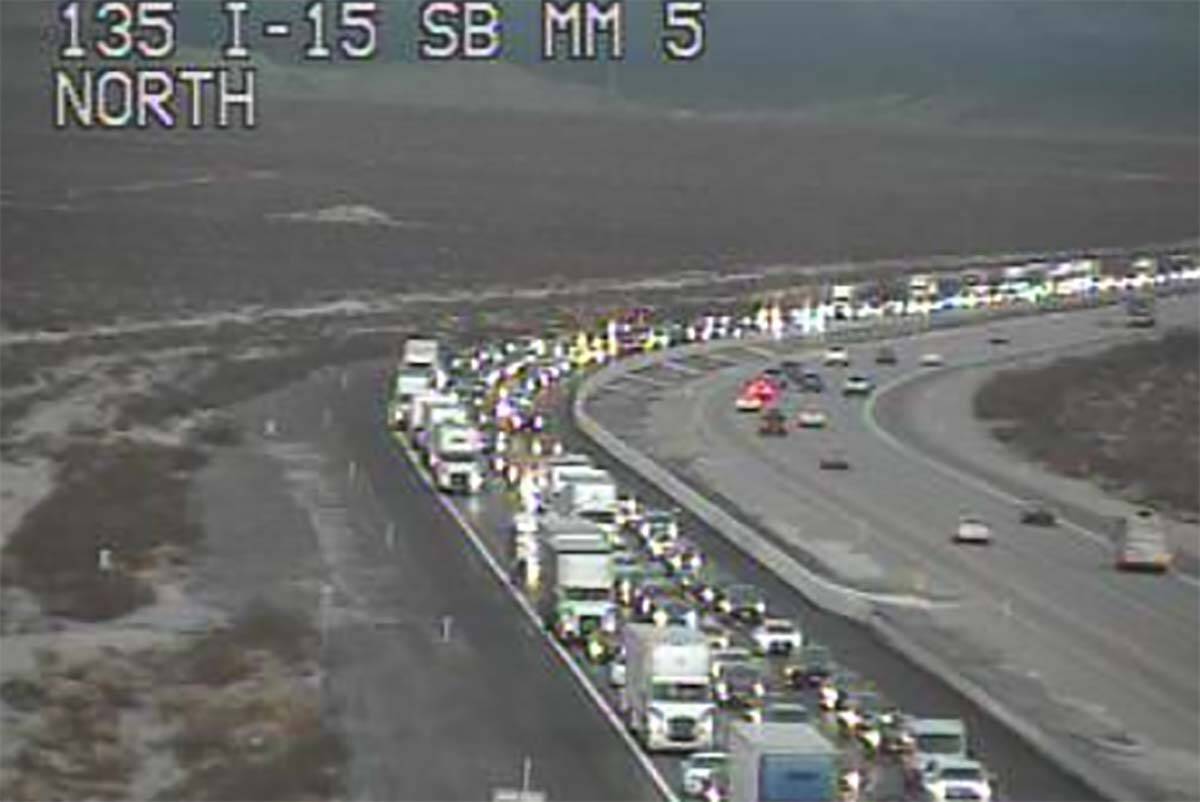 Traffic heading to Southern California is backed up on southbound Interstate 15 near the stateline on Thursday afternoon, Dec. 30, 2020. (RTC Cameras)

There’s a big difference between promising to solve a problem and actually fixing it. Just look at traffic on Interstate 15.

The Sunday after Thanksgiving featured another monster traffic backup. The Regional Transportation Commission of Southern Nevada alerted drivers that “heavy traffic to California” had created a “17 mile backup.” It added, “Prepare for long delays.” You don’t say.

Unfortunately, delays such as that have been commonplace for years. Heavy traffic will always strain roadways, but there’s another factor here. The freeway goes from three lanes each way in Nevada to two lanes in California. That frequently causes traffic backups into Nevada, especially after a long weekend.

One year ago, Gov. Steve Sisolak and California Gov. Gavin Newsom held a joint news conference. They stood in front of the I-15 and promised immediate relief. California had agreed to spend around $12 million to create a temporary third lane for 5 miles. Just days before, there had been a 20-mile backup on the Sunday after Thanksgiving 2021.

The mutual backslapping was loud enough to be heard up and down the Strip.

Gov. Sisolak said, “I appreciate Gov. Newsom and California’s willingness to work together on this critical issue.”

“While this is just a temporary solution, the expansion is crucial for continued economic health and resilience in the region and beyond,” Gov. Newsom said. “I thank Gov. Sisolak for his continued focus and partnership on this.”

A joint release from their offices said the project had an anticipated completion by the end of summer 2022.

As frustrated motorists can attest, that didn’t happen. Instead, California opened a 1-mile transition lane a few weeks before Thanksgiving. A California Department of Transportation spokeswoman said the timing for the originally promised 5 miles of a third lane wasn’t yet determined.

Here’s government efficiency in action. It takes around a year or more for Gov. Newsom’s bureaucrats to come up with a timeline for a project that was supposed to be completed in nine months.

It’s also worth pointing out the incentives here. In the private sector, Gov. Newsom would be fired for such incompetence or he’d fire those responsible for the delay. But the government has a monopoly on freeway building, so most politicians aren’t motivated by delivering results. What they want is credit, which they received at their news conference — before delivering anything.

Gov.-elect Joe Lombardo should keep on this issue, but take the opposite approach. Hold the celebratory announcement once Gov. Newsom delivers on his promises.