Over the past week, as of Thursday, there were an average of 334 new coronavirus cases a day. For comparison, there were frequently more than 1,000 new cases a day in July. The seven-day average of positive tests has dropped to 8.1 percent. That’s down from a peak of 15.7 percent in July. On Wednesday, Nevada had the lowest number of confirmed coronavirus patients hospitalized since June. All data is from the Nevada Health Response website.

The numbers are good. The details are better. King Sisolak’s coronavirus task force met Thursday. One member mentioned that the demand for coronavirus testing in Clark County has dropped noticeably. That’s despite an emergency alert going out last week urging people to get tested.

If you’re having to beg people to get tested, the crisis has passed.

Numbers around the state look even better. In the last week, Pahrump had eight new positive cases. There were no other confirmed cases in Nye County. Washoe County officials identified “private gatherings” as a “common high-risk activity.” When you’re worried about barbecues — instead of nursing homes or public events — things are looking good.

Ironically, one of King Sisolak’s edicts may have been counterproductive in preventing virus cases. “The region is experiencing party house activity in which large gatherings are occurring at private residences without fire marshal capacity limitations,” the Washoe County assessment read.

King Sisolak’s bar shutdown didn’t just hurt the economy. It drove people away from businesses that could have enforced social distancing, which is supposedly vitally important.

Lockdown defenders will credit Nevada’s decline in cases to King Sisolak’s restrictions. The numbers don’t match up with his actions. He imposed a mask mandate on June 26. That day the seven-day average positivity rate was 11.3 percent. It didn’t drop that low again until mid- August. This summer, Nevada’s seven-day average positivity rate peaked from July 8 to 10. King Sisolak closed bars in Clark and some other counties on July 11.

Nevada’s case growth and subsequent decline looks startlingly similar to what happened in Arizona, California and Utah. The best explanation seems to be that a highly contagious virus moved through a section of the country that hadn’t been hit hard yet.

After the initial uncertainty, the appropriate response would have been to inform the public, but limit restrictions unless there was a threat to hospital capacity. Top-down mandates don’t make sense when the risk posed by coronavirus varies so much by age.

Instead, King Sisolak’s one-size-fits-all rules led to the National Finals Rodeo moving to Texas this year. Then there’s the contrast of a packed Strip and caution tape over playgrounds. King Sisolak also doesn’t seem to want to relinquish his power to target events held by his political opponents.

It’s time for King Sisolak to relinquish his royal power and go back to being a governor. Reopen Nevada. 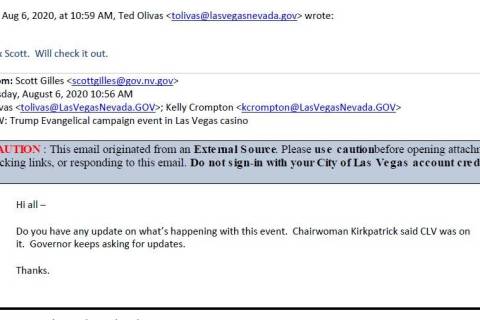