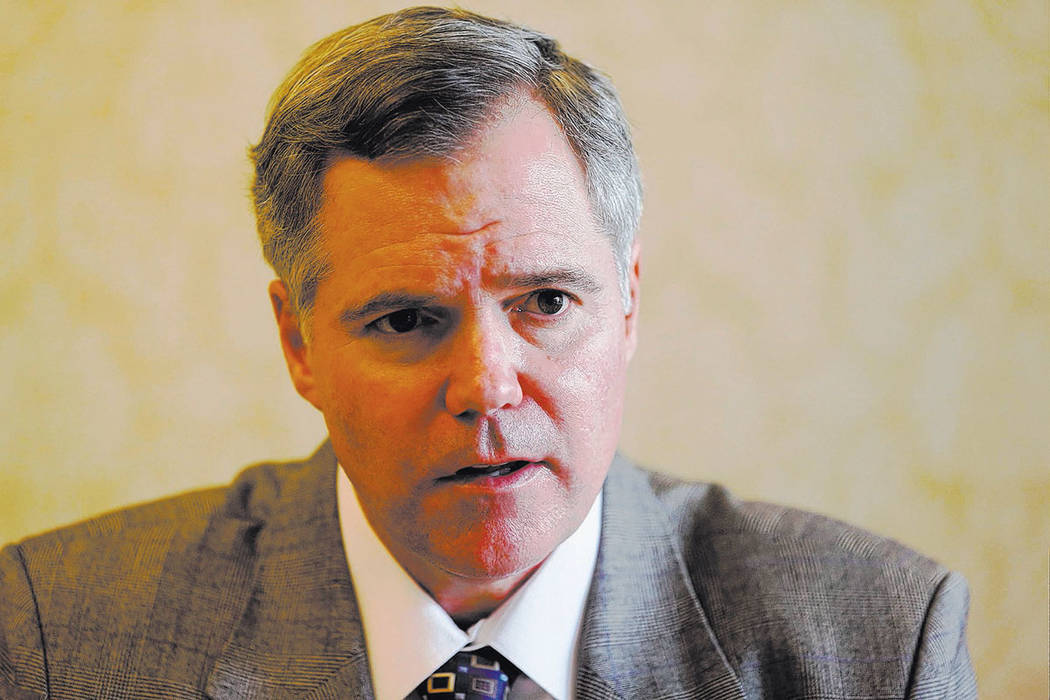 The flak is always heaviest when you are right over the target. Bull’s-eye. I must have struck right at the heart of radical liberalism with my column last Thursday about MGM Resorts International pledging to match employee contributions to a list of groups that included radical left-wing organizations.

Lucky for me, Greenspun’s passionate defense of Murren was in the Sun. That means no more than 15 people read it — including Greenspun’s wife, children and brother.

Brian called his paper the “other largest newspaper in Nevada.” Really? You mean the one that could no longer afford to publish and now is delivered as an insert inside the Review-Journal?

Greenspun claims I “bullied” Murren. “Bullied” is a leftist code word for the fact that I won the battle decisively. I really enjoy the image of a SOB (son of a butcher) and small businessman “bullying” the most powerful gaming CEO in the world, with 70,000 employees. I’m impressed — I must have super powers.

Greenspun also called me “a libertarian” and “conspiracy theorist.” As Reagan would say, “There you go again.” Here’s an update for Brian. It’s true I was the Libertarian vice presidential nominee a decade ago. But I’ve been a rock-ribbed Ronald Reagan Republican-conservative since birth.

I was born into a family of immigrant Jewish blue-collar butchers who loved America and the GOP. As opposed to Greenspun, who was born on third base and actually thinks he hit a triple.

Now to Greenspun’s defense of Murren.

First, I noticed he wrote an entire commentary without ever mentioning the radical leftist Southern Poverty Law Center that labels mainstream Christian and conservative organizations as “hate groups.” He also forgot to mention the radical Muslim terrorist-supporting Council for American-Islamic Relations. Cat got your tongue?

Or does Greenspun need to distract his readers because, of course, there is no way to defend extreme organizations such as this? There’s not much you can say about Murren hitching MGM’s wagon to a front group for Hamas.

Didn’t Greenspun’s father, Hank — a hero of mine, by the way — fight for the birth of Israel? Yet now his son defends MGM’s CEO when he pledges to match employee donations to CAIR, an organization tied to Hamas and the Muslim Brotherhood. Really? CAIR funds groups dedicated to the destruction of Israel and murder of every Jew in the world, including you and me, Brian.

Second, Greenspun may have missed the whole point of my column.

It’s pretty simple: No CEO has a right to tie his company, shareholders and employees to his radical leftist views.

But I’m obviously much more fair and reasonable than any liberal. I would never attack a CEO for his personal political beliefs. Liberals don’t feel that way. Remember a few years back, when liberal activists forced the CEO of Mozilla to resign because he made a personal $1,000 donation to a California PAC fighting gay marriage? This CEO didn’t involve his company in politics in any way. He didn’t use a dime of company money. He didn’t ask his employees to join him.

If a conservative CEO can get be forced to resign for writing a measly $1,000 personal check to a mainstream conservative group … well, what should happen to a liberal CEO who announces sending millions of dollars of shareholder money (and matching employee money) to radical extreme leftist organizations, including organizations tied to Muslim terrorism?

And by the way, it turns out that thousands of MGM employees listen to my radio show every afternoon. They are outraged and disgusted at Murren’s actions. MGM is not one big happy family. It turns out not everyone at MGM shares Jim Murren’s views. What a shocker!

Contact Wayne Allyn Root at Wayne@ROOTforAmerica.com. Hear or watch his nationally syndicated “WAR Now: The Wayne Allyn Root Show,” from 3 to 6 p.m. daily at 790 Talk Now and at 5 p.m. on Newsmax TV.