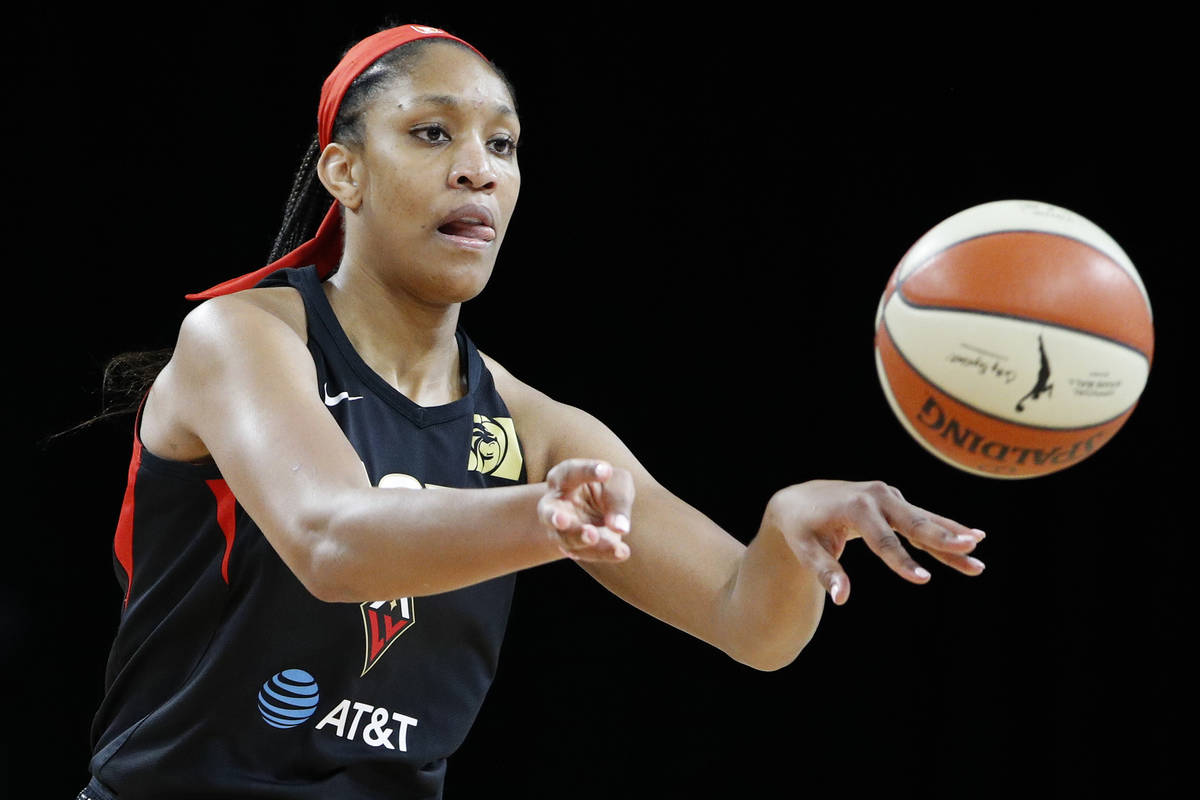 Las Vegas Aces' A'ja Wilson passes against the Washington Mystics during the first half of Game 4 of a WNBA playoff basketball series Tuesday, Sept. 24, 2019, in Las Vegas. (AP Photo/John Locher)

Here’s a look at how the Las Vegas Aces break down by position, and what the team will expect from each player on the roster this season.

Losing 6-foot-8-inch Liz Cambage leaves a huge hole under the basket. Cambage was a second-team All-WNBA performer last season and ranked in the top 11 in the league in scoring, rebounding, field goal percentage and blocked shots.

Without her, 6-6 Carolyn Swords is Las Vegas’ tallest player, and she’ll likely log the bulk of the minutes when the Aces have a true center. Avery Warley-Tablert was signed to take Cambage’s place on the roster, and she’ll help on the boards despite being a bit undersized for a center at 6-3.

Most of the Aces’ hopes will fall on third-year power forward A’ja Wilson. Her numbers were down a bit last season from her rookie year, but she still averaged 16.5 points and 6.4 rebounds.

Free agent pickup Angel McCoughtry has the ability to play shooting guard or small forward, and it’s likely she’ll have time at both spots. Small forward Dearica Hamby will try to build on her success of last season when she was the WNBA’s Sixth Woman of the Year.

This is where the Aces have the most depth, but losing Kelsey Plum to a torn Achilles tendon in June will hurt.

Jackie Young is expected to make a leap as a scorer in her second season after flashing her passing and defensive skills last year. Young’s fellow Notre Dame alums Lindsay Allen, back after an injury cost her last season, and sharpshooter Kayla McBride will also log key minutes.

In a word, here’s what the Aces are expecting to get from each player.

G Linsday Allen, ball-handling: Allen missed all of last season with an injury but has a 3-to-1 assist-to-turnover ratio in her two seasons.

F Dearica Hamby, energy: Hamby was the Sixth Woman of the Year last season, and the Aces will need the same type of boost off the bench again. She could receive some starting assignments, depending on injuries and matchups.

G Kayla McBride, shooting: McBride shot 42.8 percent from 3-point range for the Aces last year, and they’ll need more of the same to help them stretch the floor.

G/F Angel McCoughtry, leadership: McCoughtry’s resume speaks for itself. She’s a two-time Olympic gold medalist and six-time All-WNBA selection who has led the Atlanta Dream to three WNBA finals appearances in her 10 years in the league.

G Danielle Robinson, quickness: Robinson might not be as fast as she once was, but she’ll help the Aces push the tempo after being picked up as a free agent.

G Sugar Rogers, experience: It’s Rogers’ eighth year, and she’ll likely be called upon to play more than the 11.6 minutes per game she did last year.

C Carolyn Swords, size: With Cambage having opted out, the 6-foot-6-inch Swords is the Aces’ tallest player. She’ll be called upon to guard some of the other bigs in the league and help on the boards.

C Avery Warley-Talbert, strength: Warley-Talbert has been described as a bull by teammates, and the Aces will need that physicality inside.

F A’ja Wilson, everything: Wilson is the Aces’ star and will look to improve on her averages of 16.5 points, 6.4 rebounds and 1.7 blocks per game from last season.

G Jackie Young, versatility: Young was eighth in the league in total assists with 153 and showed an ability to guard a number of positions. She was timid at times in looking for her shot. The Aces expect her to play with more confidence in that area this season.