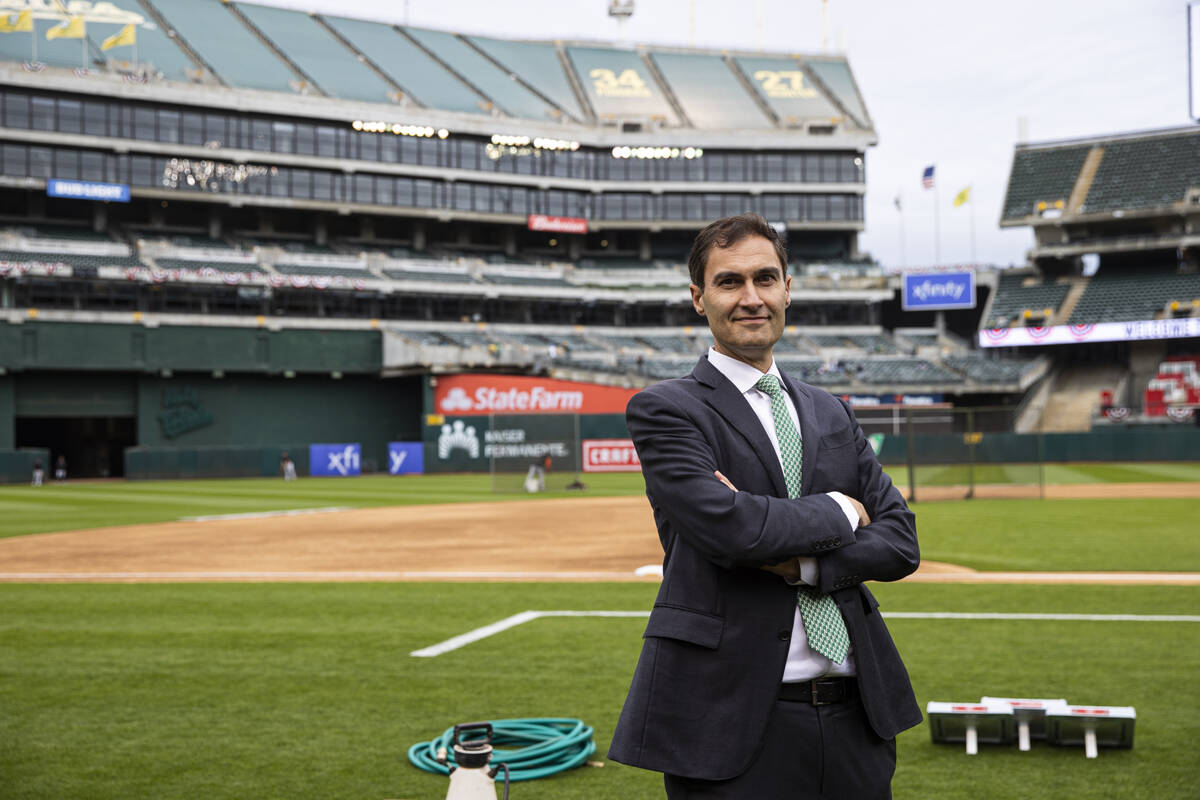 Oakland Athletics president Dave Kaval said Friday he has been making weekly trips to Las Vegas as the MLB franchise works to choose between two sites for a potential $1 billion ballpark.

“There’s been excellent progress being made on that every week; we’ve been in and out of Vegas every week for the last couple of weeks,” Kaval said. “The momentum is building.”

Kaval didn’t have a timeline on when the potential Las Vegas stadium site could be announced. He said the team wants to have all aspects of the ballpark plan in place when it is announced.

“We’re doing a lot of design work, final feasibility, traffic, parking and all that type of stuff,” Kaval said.

After it initially appeared that no public assistance would be available to the A’s if they relocate to Las Vegas, Steve Hill, president and CEO of the Las Vegas Convention and Visitors Authority, changed that tune in May.

Hill said that although a new room tax such as the one the Raiders received for Allegiant Stadium is unlikely for the A’s, there were ways a public-private partnership could work.

Kaval said it wasn’t surprising that Southern Nevada officials might sweeten the pot with public assistance.

“One thing that we’ve always been impressed with in the last year is how folks in Las Vegas have been open and creative to come up with ideas and get to yes,” Kaval said. “They have a great track record of pulling off big projects … That’s a big selling point.”

The San Francisco Bay Conservation and Development Commission is set to vote on whether to remove the port priority use designation on the Howard Terminal site. The 56-acre waterfront site is where the A’s are looking to build a $12 billion mixed-use development that would include a $1 billion ballpark.

The designation needs to be removed to allow the project to move forward. Last month, BCDC staff preliminary recommended the port priority use be removed, ahead of a June 30 vote.

The Oakland City Council is expected to have a discussion at its July 5 meeting regarding a possible public referendum to be included on November’s ballot regarding the A’s Howard Terminal plans. If the city council votes in favor of the ballot measure, another meeting might be needed to add that to the ballot. The referendum would be nonbinding and serve as a way to help guide the city council’s decision on Howard Terminal.

Not only would that likely put a kink in the timeline for finality in Oakland this year, it also could impact how the BCDC votes with the potential of a public vote looming, Kaval said.

“It’s a risk,” Kaval said. “The BCDC is a super majority vote. You need 18 of the 27 commissioners to vote yes. That’s a tall order … getting that type of support is not easy.”

Also, the A’s and the city disagree on certain aspects of a potential ballpark deal. The Oakland City Council passed its own version of a term sheet in July 2021, but the A’s didn’t approve of it.

The sides have been negotiating their differences on community benefits and infrastructure aspects ever since. Almost one year later, the same issues remain, Kaval said.

“We still remain apart on a deal,” he said. “We proposed the framework that would have the A’s funding the community benefits in exchange for a little more help on a tax increment for on-sites (infrastructure improvements), but that was rejected.”

On Thursday, after an MLB owners meeting in New York, commissioner Rob Manfred said the A’s needed to reach a ballpark deal soon in Las Vegas or Oakland.

Kaval said Manfred didn’t set a deadline for the A’s, but both sides hope that the saga comes to an end this year.

That’s especially important with elections in Southern Nevada and Oakland in November, where key players in the process, including Oakland Mayor Libby Schaaf, could be out of office.

“The end of this year is really where we’re all looking at to make some definitive decisions,” Kaval said.

If the public referendum is part of November’s elections, the Oakland ballpark process probably would be pushed into 2023, something Kaval opposes.

“Even if it’s a yes (vote), it wouldn’t be binding,” he said. “It’s difficult to have additional nonbinding votes or referendums, because you don’t get full clarity on the situation. That’s really hard for us, because we need to know definitely that there’s a path there in Oakland, and right now it’s pretty hazy.”