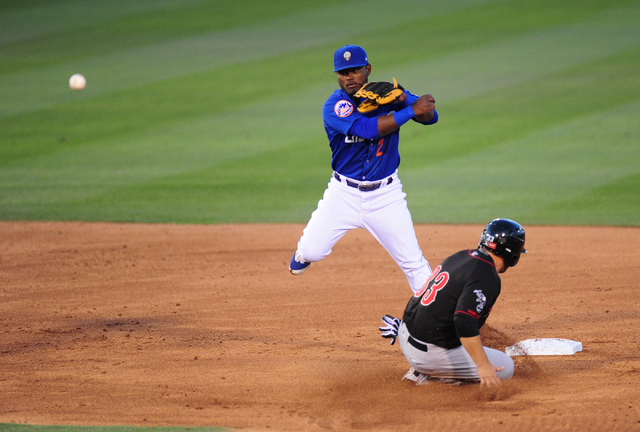 The hit parade started early with a Dilson Herrera double to lead off the bottom of the first inning. And it never stopped

Every starter, save for pitcher Gabriel Ynoa, finished with at least two hits as the 51s hung on for a 17-14 victory over theMemphis Redbirds at Cashman Field on Saturday.

But though they were hiting seemingly all night, their bullpen surrendered enough runs that they had to get closer PaulSewald warming up just in case.

“He was hot, put it that way,” acting manager Jack Voigt said. “He was ready to come in.”

That was a situation the 51s likely didn’t foresee early on as they scored runs in bunches at the beginning of the game.

They eclipsed their season highs in both runs and hits (21) in the victory and started the scoring in the first with four runs— three on a T.J. Rivera’s sixth home run of the year.

“You’re always trying to put good at-bats together. I think that’s what you saw today was guys pretty much beingrelentless,” Rivera said. “(We) just kept going out there and trying to put the ball in play hard and luckily we put enough upbecause they did start to scratch back there at the end.”

They scored two more runs in the second on a Johnny Monell home run, four more in the fourth and then two apiece in thenext three innings before capping their night with one in the eighth.

“That’s what we just try to talk about is keep the line moving,” Voigt said. “There’s no rule that says we can’t hit for a halfan hour before we have to change to defense.”

“He gets us going. He’s a little fireball,” Rivera said. “When he gets on base, he’s exciting to watch and I think that gets thewhole team going.”

Rivera and Monell each finished with three RBIs while center fielder Kyle Johnson had a team-leading four.

All of that was more than enough for their ace, Ynoa, who gave up just two runs (one earned) in his six-inning outing, goodfor his eighth quality start in 10 games.

But after his exit, Memphis teed off on the 51s’ bullpen, scoring four runs apiece off of Erik Goeddel and Jeff Walters, threeoff Stolmy Pimentel and one off Josh Smoker. They brought the tying run to the plate before Smoker got Jonathan Rodriguezto strike out to end the game.

“We’ve got guys that are trying to work on things and it was a good situation to do it,” Voigt said. “The results probablyweren’t as good as everyone would have wanted but a win is a win and the offense was able to score enough.”

Center fielder Brandon Nimmo has been out of the lineup for three straight games and is considered day-to-day. Actingmanager Jack Voigt said Friday that Nimmo “had some soreness.”

“I’m able to help out if Jack needs me,” Nimmo said. “I can come in and help him pinch hit, I can help him pinch run, I canhelp out the outfield but just right now it’s a day-to-day thing and that’s about all I can say about it.”