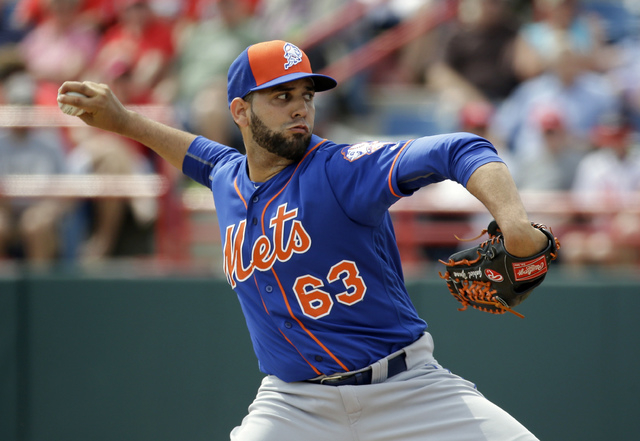 Gabriel Ynoa of the Las Vegas 51s is shown pitching for the New York Mets in spring training in Viera, Florida, on March 3, 2016. (John Raoux/AP) 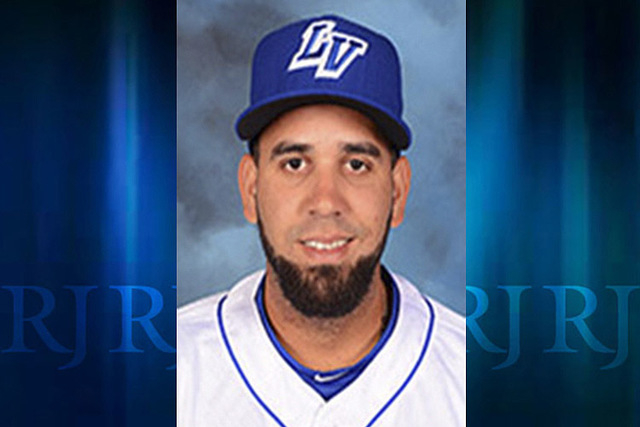 Gabriel Ynoa has been the picture of consistency for the 51s this season.

Prior to Monday, the right-hander hadn’t allowed more than three runs in a game and had recorded five straight wins and seven consecutive quality starts.

But on Monday, Ynoa was hit around by the Nashville Sounds en route to his first loss of the season. He gave up four runs in six innings as the 51s lost 7-4 at Cashman Field.

“Tonight I thought Ynoa wasn’t as sharp as he’s been in all of his starts,” Backman said. “He kept us in the ball game but he wasn’t the Gabriel Ynoa that he’s been.”

Ynoa allowed a two-run home run in the first inning and at least one hit in every inning after, giving up a season-high 11 hits in his outing.

“His changeup is one of his best pitches and he left it up all night. In the first inning, the home run was off of a changeup that was up,” Backman said. “His changeup got hit, which generally doesn’t get hit. But he pitched up in the zone tonight, even with his fastball, too, I thought.

Meanwhile, the 51s offense couldn’t get much going off Sounds starter Dillon Overton.

Backman said they didn’t carry out the plan they had wanted to against him.

“Our game plan was to try to hit the ball to right-center field and we were out in front all night long against him,” he said.

“Some guys are good throwers (but) he’s a very good pitcher,” center fielder Brandon Nimmo said. “He was commanding all of his pitches, had a really good feel for his changeup tonight and was going to both sides of the plate.”

Of the five hits Overton gave up, Nimmo had three of them.

“Sometimes you get games where you hit it on the barrel and it finds spots to fall,” Nimmo said. “This was one of those games for the most part.”

By the time he stepped to the plate in the eighth, Nimmo was just a homer away from the cycle.

Instead, he hit a ball hard to the wall in right field to lead off the inning and spark a three-run rally.

The 51s caught a break after they loaded the bases and Travis Taijeron hit a routine ground ball that Sounds third baseman Renato Nunez made a throwing error on going to the plate.

They scored two more runs in the inning on a Niuman Romero single and Marc Krauss sacrifice fly before second baseman Dilson Herrera flew out in foul territory to end the inning and leave the bases loaded.

After cutting Nashville’s lead to 5-4, with the hot-hitting Nimmo and Rivera coming to the plate to lead off the ninth, it seemed like the 51s would have a decent opportunity in the ninth to the tie game.

Even after Paul Sewald surrendered a two-run home run in the top of the inning, the 51s still thought they had a chance, which is why, Nimmo, who finished the day 4-for-5 had his fifth at-bat — the only out he made — on his mind after the game.

“I’m not feeling deflated (after the home run) like ‘Oh, well now we can’t win the game.’ Well this is Las Vegas and you can score runs pretty easily so you do know that,” Nimmo said. “(I) thought we had a shot at the end there and … I would have liked to have gotten on base and maybe we would have gotten something going, especially with T.J. getting a knock. Then the tying run comes to the plate and things can happen quickly here.”