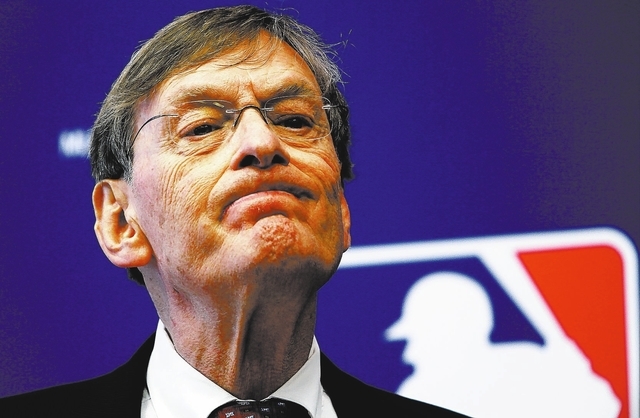 FILE - In this May 12, 2011, file photo, Major League Baseball Commissioner Bud Selig listens to a question during a news conference in New York. Selig said in a formal statement Thursday, Sept. 26, 2013, that he plans to retire in January 2015. (AP Photo/Bebeto Matthews, File)

NEW YORK — Bud Selig took over a sport with $1.7 billion in revenue, four teams in each year’s postseason, economic disparity among the clubs and a fixation on sticking with traditions that dated to the 19th century.

After a decade of maintaining his departure was imminent, the 79-year-old baseball commissioner put his exit plans in writing Thursday and said in a statement he will retire in January 2015 after 22 years — the second-longest term behind Kenesaw Mountain Landis.

His revolutionary reign produced an $8 billion industry, interleague play, an expanded postseason and two decades of labor peace. But, he also presided over a canceled World Series and long-running drug scandal.

“He’s been the voice of baseball. Some people liked his voice. Some people didn’t,” Minnesota Twins manager Ron Gardenhire said. “I have a lot of respect for the guy.”

Selig has been a bit of the Boy Who Cried Wolf in the past when it came to his retirement. He said in 2003 that he would step down at the end of 2006 but has repeatedly accepted new contracts.

Some owners — even his wife — had been skeptical in the past that he really would quit, but this marked the first time he issued a formal statement that he will give up the sport’s top job. He even gave an exact date: Jan. 24, 2015.

“I look forward to continuing its extraordinary growth and addressing several significant issues during the remainder of my term,” he said.

Selig’s length of service and impact on his sport matches those of Pete Rozelle, the NFL commissioner from 1960 to 1989, and David Stern, who is stepping down in February after 30 years as NBA commissioner.

Selig said he will soon announce a transition plan that will include a reorganization of central baseball management. Rob Manfred, baseball’s chief labor negotiator, has gained increased influence in recent years, but it’s not clear whether Selig’s successor will come from within the commissioner’s office.

Many had speculated Selig wanted to surpass the term of Landis, who served from November 1920 to November 1944.

Perhaps the biggest mark on Selig’s tenure was the prevalence of performance-enhancing drugs. Management didn’t have a drug agreement with its players from October 1985 until August 2002, and drug testing with penalties didn’t start until 2004. Selig has repeatedly defended his record, saying baseball acted as fast as it could in a matter that was subject to bargaining with players.

“The game has grown under him tremendously. He’s made every effort to try to clean the game up,” New York Yankees manager Joe Girardi said. “He’s left his mark on the game. There’s no doubt about it.”

Selig’s tenure also included splitting each league into three divisions instead of two in 1995, when wild cards and an additional round of playoffs were added. Wild cards doubled to four last year, when the postseason stretched to four rounds.

Expansion teams in Arizona and Tampa Bay started play in 1998, raising the major league total to 30. Interleague play began in 1997 along with revenue sharing, which allowed the smaller-market clubs a better chance to compete. Jackie Robinson’s No. 42 was retired by Selig for all of MLB that same year, and other initiatives followed. Major League Baseball Advanced Media launched in 2000, the World Baseball Classic in 2006, limited video review of umpires’ calls in 2008 and the Major League Baseball Network in 2009.

Owners have repeatedly praised his financial stewardship, which has led to record franchise values as shown by the $2 billion sale of the Los Angeles Dodgers last year. The average player salary has tripled under his tenure to more than $3 million.

Selig’s critics said he moved cautiously — a characterization even he sometimes agreed with. Running baseball from his longtime home in Milwaukee, he worked to build consensus rather than dictate to owners in the manner of Peter Ueberroth. Selig used a grandfatherly charm to get what he wanted.

“Everything’s been a success overall,” Toronto general manager Alex Anthopoulos said. “You’re going to have your detractors, that goes without saying.”

Selig became a baseball fan when his mother took him to games as a child. Working in the family auto-leasing business, he became a minority investor in the Milwaukee Braves and tried to stop the team’s move to Atlanta for the 1966 season.

As a stopgap, he arranged for the Chicago White Sox to play nine regular-season games at Milwaukee in 1968 and 11 in 1969. Just before the 1970 season, he bought the Seattle Pilots in bankruptcy court, moved the franchise to Milwaukee and renamed it the Brewers.

Mentored by then-Detroit Tigers owner John Fetzer, Selig became a leading owner by the early 1980s in his role as chairman of the Player Relations Committee, which determined labor policy. He was part of the group that wanted major changes in the sport’s lab contract with players and forced the resignation of Fay Vincent, who had been in office for three years. Selig took over as acting commissioner on Sept. 9, 1992, in his role as chairman of the executive council.

While he presided over a 7½-month strike in 1994-95 that led to the cancellation of the World Series for the first time in 90 years, following eight straight work stoppages owners and players reached agreements without interruption in 2002, 2006 and 2011.

Although Selig repeatedly said he would not take the job full time, he was formally elected commissioner July 9, 1998. He turned running the Brewers over to daughter Wendy Selig-Prieb, but the Selig family did not sell the franchise until 2005.

Selig agreed to a new contract as commissioner in 2001. He first announced his planned retirement in 2003, telling a group from Associated Press Sports Editors he would leave in 2006.

“For a guy who took it in Sept. 9, 1992, and I told my wife it was two-to-four months — 14 years later … I think that will be enough. There’s no question, because there are other things I really would like to do.”