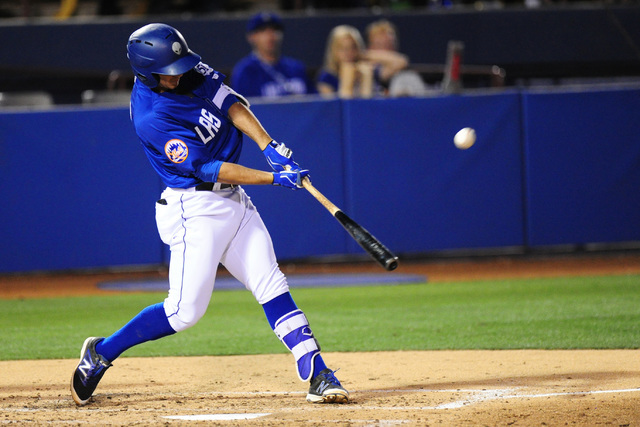 T.J. Rivera of the Las Vegas 51s bats against the Nashville Sounds on May 23, 2016, at Cashman Field. Josh Holmberg/Las Vegas Review-Journal

T.J. Rivera stood at home plate appearing confused as the Nashville Sounds piled out of the dugout and onto the field to congratulate one another.

Rivera certainly wasn’t the only one confused after Wednesday night’s 5-3 loss in 12 innings to Nashville at Cashman Field ended in a bizarre fashion.

Brandon Nimmo, who walked with two outs in the 12th, appeared to have second base easily on defensive indifference.

That is, until Rivera swung and missed, and Nimmo turned back to go to first.

Nimmo got caught between first and second to end the game with the Pacific Coast League’s leading run producer in the batter’s box.

“Brandon said he thought that it was a foul ball,” Las Vegas manager Wally Backman said. “That’s why he started back.”

While the ending sticks out, the 51s (24-21) had their chances to win and couldn’t capitalize.

A failed attempt in the fourth inning to execute a hit-and-run turned into a caught stealing one batter before Travis Taijeron hit a home run that would have given them the lead.

The team didn’t do any better attempting to sacrifice bunt, either.

“We couldn’t execute. We couldn’t do the little things that win you ballgames,” Backman said.

The 51s had about as much success against Nashville starter Daniel Mengden as the rest of the PCL — which is to say not much.

Mengden, who features an unorthodox delivery, gave up Taijeron’s home run and three other hits in seven innings.

“His stuff is good,” Backman said. “He’s different, which as a hitter, you’re not used to seeing a guy with that type of delivery, I guess, on a consistent basis. There’s a lot of legs, a lot of stuff coming at you before the ball even comes out of his hand.”

While Mengden was holding the 51s’ offense in check, Las Vegas starter Rafael Montero did the same to Nashville (26-20).

Montero gave up three hits and two walks in the fourth inning, but escaped relatively unscathed, allowing just one run thanks to a strong throw from Nimmo cutting down a runner at the plate.

His five walks were a season high, but despite his early wildness, he allowed just one run in six innings and retired the final seven batters he faced.

“I thought his last two innings were his best two innings,” Backman said. “He only allowed one run, he pitched himself out of some jams. He was a little frustrated because he wasn’t getting the low pitch like I think he normally has. He still has the ability to keep you in the game when he’s not just right, when he’s not perfect.”

Montero and reliever Josh Smoker did their part in holding down Nashville for eight innings — long enough for the 51s to take a 3-2 lead on a Rivera infield single and a balk in the eighth.

And at that point, with closer Paul Sewald coming in for the ninth, the 51s looked as if they would escape with their first win of the series. Instead, Sewald surrendered two hits before uncorking a wild pitch with two outs that catcher Johnny Monell had no chance of smothering.

And from there, though the 51s had runners on in the next four innings — including the leadoff runner in two of those innings — they couldn’t scrape together a run and the Sounds took the 5-3 lead on two unearned runs off Zack Thornton in the 12th.

“We just didn’t get any timely hitting tonight,” Backman said. “We couldn’t execute the bunts, and the way the game ended was a little bit bizarre. That’s a tough loss for us tonight.”

Outfielder Roger Bernadina was out of the lineup Wednesday for the third straight game with an oblique injury. Bernadina first felt something during Sunday’s game at Colorado Springs.

Bernadina is hitting .290 with 14 RBIs in 38 games and has played all over the outfield for Las Vegas. Kyle Johnson, recently called up from Double-A Binghamton, has started in left field in his absence.