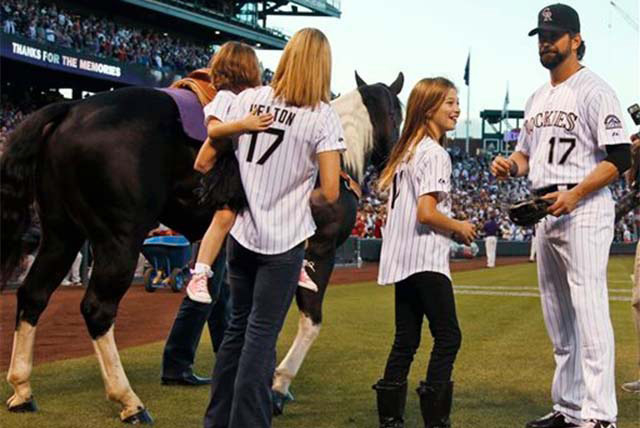 After being given a gelding paint horse as a retirement present, Colorado Rockies first baseman Todd Helton, right, joins his daughter Tierney Faith, second from right, and his wife Christy and daughter Gentry Grace in looking over the horse. (AP Photo/David Zalubowski)

DENVER — The Colorado Rockies gave Todd Helton a horse — a real horse — to ride off into retirement.

In a pregame tribute commemorating his final contest at Coors Field on Wednesday night, Helton caught the ceremonial first pitch from his daughter with his wife, younger daughter and good friend Peyton Manning watching from the field.

Afterward, a cowboy emerged from the left field gate and trotted out Helton’s newest teammate — a shimmering black and white gelding Paint horse named “A Tru Bustamove.” The horse came complete with a custom-made saddle that featured the Rockies’ logo, Helton’s number (17) and a silver embroidered handle.

All the while, the fans showered Helton with applause as he wore purple pinstripes in front of the home crowd for the final time in his 17-year career. He acknowledged them with a tip of his cap before heading into the dugout to get ready for a game against the Boston Red Sox.

He hit a solo homer in his first at-bat after the tribute, bringing the raucous crowd to its feet yet again.

Helton appreciates all the outpouring of emotion even if he’s a no-fuss kind of person.

Each time Helton has stepped into the batter’s box or made a play in the field — no matter how routine — since announcing his retirement nearly two weeks ago, the crowd at Coors Field has given him a roaring ovation.

“Seventeen years goes by in a heartbeat,” said Helton, who presented the lineup to the home plate umpire before the game. “Once you get caught up in a season, caught up going out there and playing, it just happens. The next thing you know you’re retiring.”

Soon, Helton will trade driving in runs for riding around his Colorado ranch with his new horse.

Leading up to his final home game, Helton admitted it was going to be tough and “emotional.”

“It’s also going to be a good day,” said Helton, whose final game is Sunday in Los Angeles against the Dodgers.

His teammates leaned on the dugout railing as they watched highlights of Helton’s career. Manning had a front-row view, too, taking a quick break from preparing for Sunday’s game against the Philadelphia Eagles.

“It’ll be a special night, emotional night for a lot of people that will be there,” the Broncos quarterback said after Wednesday’s practice. “And I’m looking forward to being there.”

Saying farewell to Helton seems almost surreal for smooth-field shortstop Troy Tulowitzki. Helton has scooped countless throws out of the dirt to bail out Tulowitzki and the rest of the infielders.

“It’s just crazy to think he won’t be there,” Tulowitzki said. “It will be a sad day for myself, seeing him go. But I’m happy for him, if it’s time to go. He’s had a great career, a Hall of Fame career.”

Helton will certainly receive strong consideration for Cooperstown, even if he did play his entire career at hitter-friendly Coors Field. After all, he’s one of two players to have at least 2,500 hits, 550 doubles, 350 home runs and hit .315 or higher for his career.

The other? Former St. Louis Cardinals great and Hall of Famer Stan Musial.

“Helton has put up monster numbers,” outfielder Carlos Gonzalez said. “I’m sure that he feels really happy the way he’s going to end.”

Always able to keep his emotions in check, Helton cracked — briefly, anyway — at his recent farewell news conference, choking up several times as he chatted about his playing days.

On the way to the park, he shed a tear, too. Just one, though, he said.

“There’s no crying in baseball,” he said.

Helton insisted he’s at peace with his decision. He’s ready for retirement, despite hitting .314 since his announcement.

“Mentally, 17 years is enough. Physically, it’s definitely enough,” said Helton, a first-round pick out of the University of Tennessee in 1995. “It’s September. I’m 40 years old. I’m looking forward to the season ending. It may be tough again once spring training rolls around, when next seasons starts. It may be hard for me then. But right now, it’s been a long grind, long season. It’s time.”

With Helton goes the face of the franchise, the player who’s been in the field so long that he once was teammates with current manager Walt Weiss.

“Just steady. Just so steady,” Rockies owner Dick Monfort said about his longtime first baseman who’s been bothered by back and hip trouble in recent seasons. “When Todd came up to bat, you had as much confidence in him as anybody. We’ll miss him around here.”

Helton made his Rockies debut on Aug. 2, 1997, in Pittsburgh, batting fifth and starting in left field. He flied out in his first plate appearance and then singled. Following a walk, he hit his first homer, a solo shot off Marc Wilkins.

Since then, there have been plenty more highlights for Helton:

— Leading the Rockies to the 2007 World Series (where they were swept by the Boston Red Sox).

Red Sox slugger David Ortiz had a feeling this sort of career was about to unfold for Helton after a conversation with former Rockies shortstop Neifi Perez during winter ball in 1997. Perez said there was an up-and-comer named Helton about to step in for Andres “Big Cat” Galarraga.

“The following year we’re playing winter ball again and I’m like, ‘Neifi, you were right,’” Ortiz recounted. “He’s been a leader for that ball club for a long time and he’s been teaching a lot of young kids the right thing. That’s one of the good guys you want to have around.”