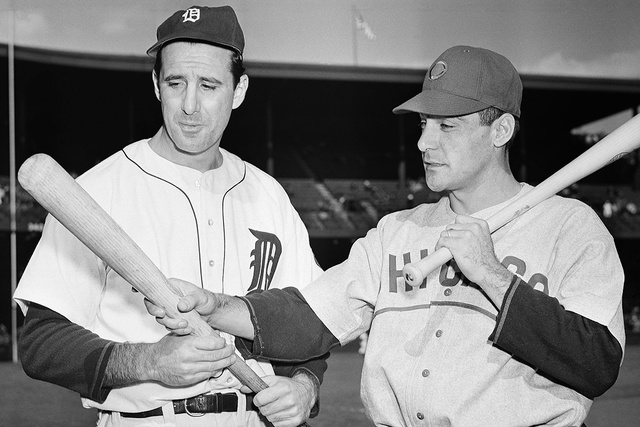 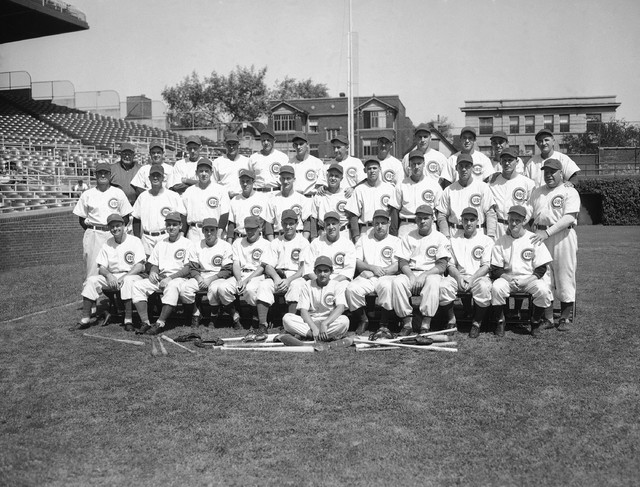 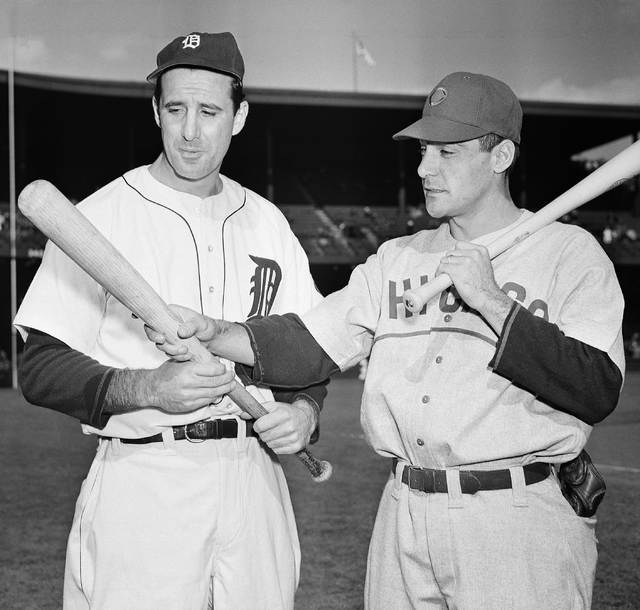 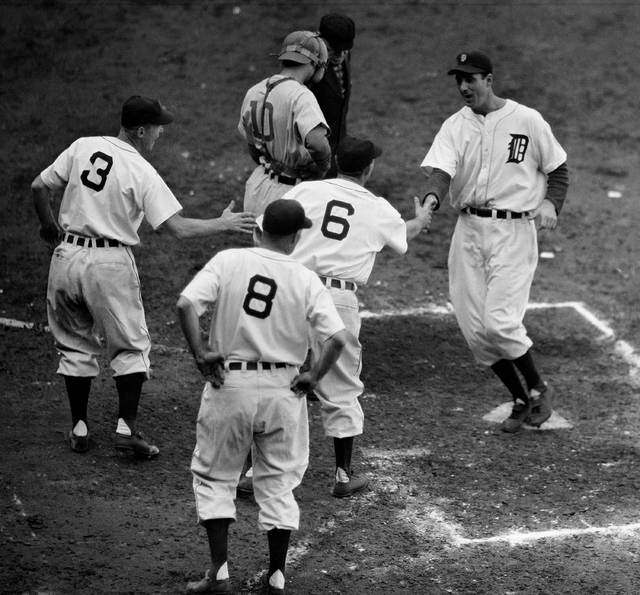 Detroit Tigers left fielder Hank Greenberg, right, finds three teammates, Eddie Mayo (3), Roger Cramer (8), and Ray Cullenbine (6), on hand to welcome him as he crosses the plate with a fifth-inning, three-run homer against the Chicago Cubs in the second game of the World Series on Oct. 4, 1945 at Detroit. (AP Photo) 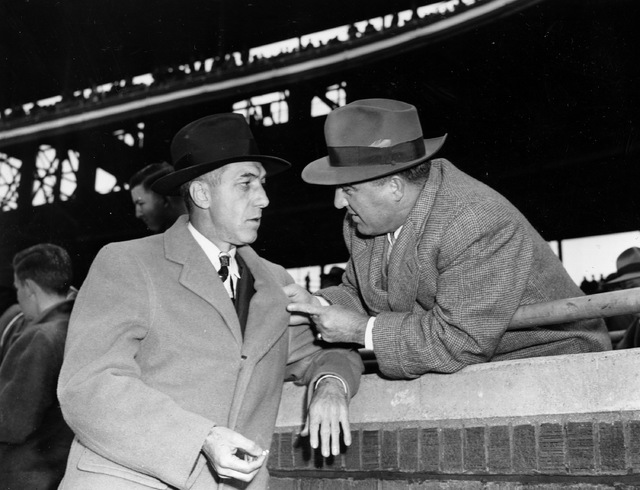 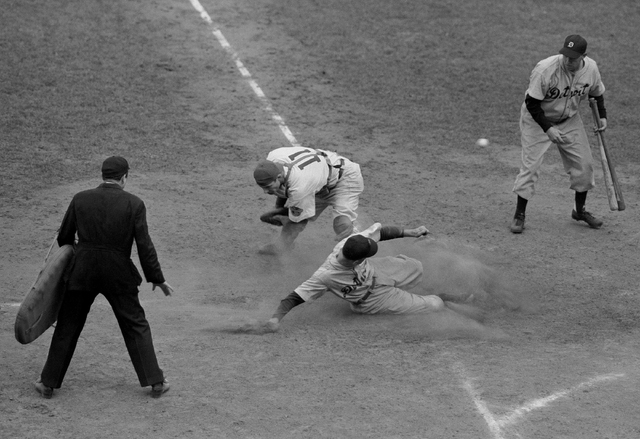 Detroit Tiger second baseman Eddie Mayo slides safely across home plate in the eighth inning of the final World Series game here on Oct. 10, 1945 at Chicago. As Chicago Cubs catcher Mickey Livingston (11) bends to trap the outfield throw (arrow) which bounces in back of the plate toward Roy Cullenbine, right, next batter. The Tigers won the game 9-3 and the 1945 World Series Championship. (AP Photo) 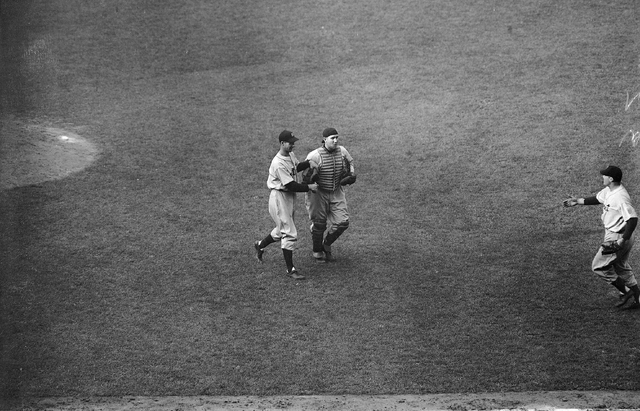 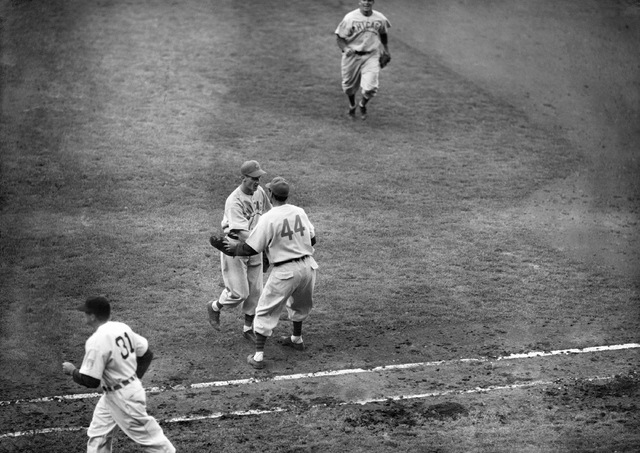 In this Oct., 3, 1945, file photo, Phil Cavarretta (44), of the Chicago Cubs, rushes over from first base to pitcher Hank Borowy to congratulate him on his six-hit, 9-0, victory over the Detroit Tigers in Game 1 of baseball's World Series in Detroit. (AP Photo/File) 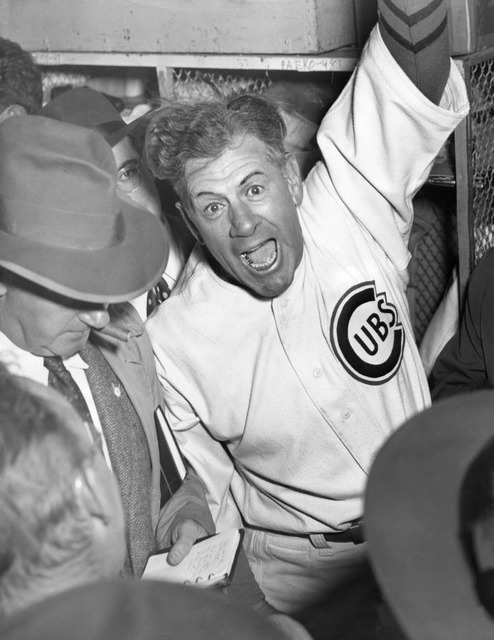 In this Oct. 8, 1945 file photo, Chicago Cubs manager Charlie Grimm Manager celebrates the Cubs 8-7 victory in the sixth game of the World Series in 12 innings at Wrigley Field in Chicago. (Mel Larson/Chicago Sun-Times via AP, File) 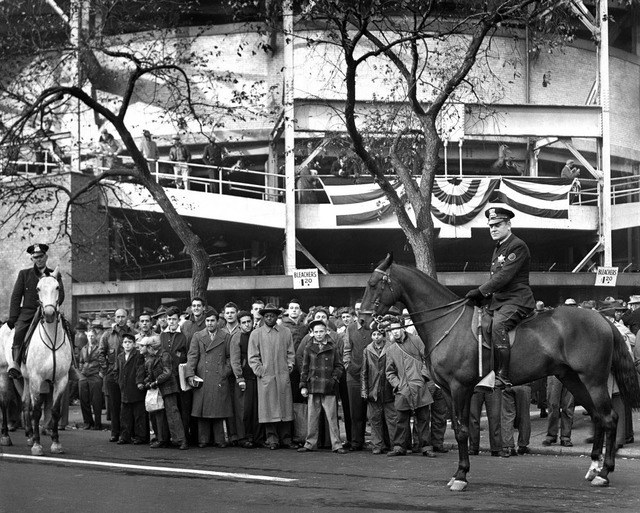 In this Oct. 10, 1945, photo, fans wait to buy bleacher tickets to the seventh game of the World Series between the Chicago Cubs and Detroit Tigers at Wrigley Field in Chicago. (Mel Larson/Chicago Sun-Times via AP)

The Chicago Cubs host the Cleveland Indians tonight for Game 3 of the World Series, and it’s the first time the Cubs have hosted a World Series game since 1945.

Game 7 saw the Tigers score five runs in the first inning and the Cubs unable to come back. The Tigers won 9-3, capturing their second World Series title.

For the next seven decades, the Cubs and Wrigley Field has not seen the World Series.

Regardless, it’s a historical day in Chicago as Wrigley Field is prepped and ready for the World Series to return.

Check out the photo gallery above.