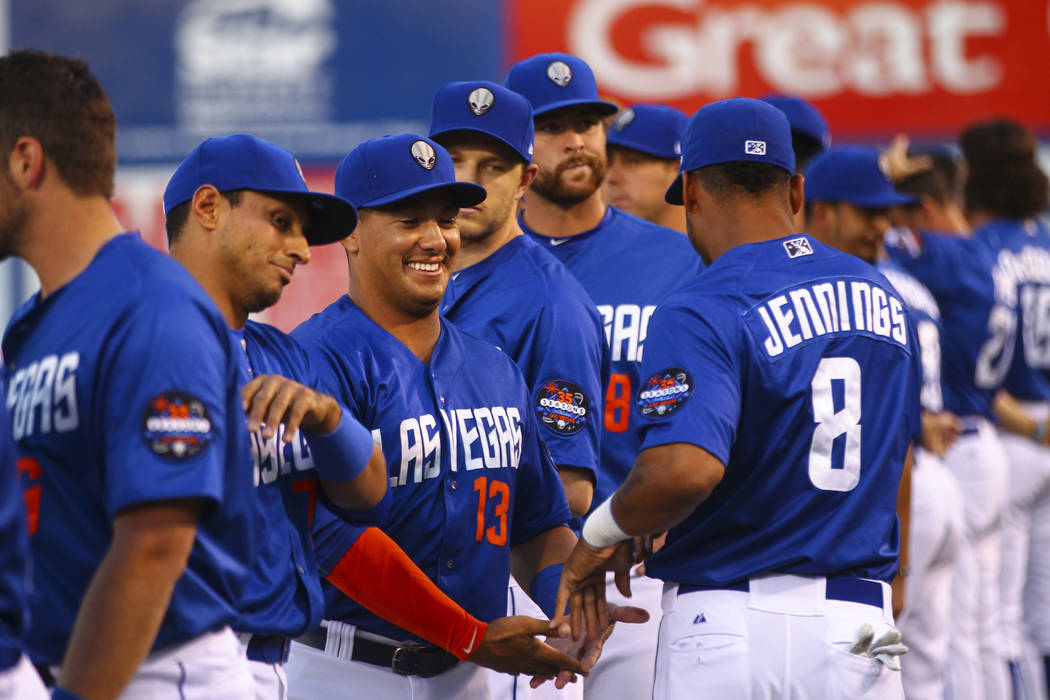 That can be seen in anything from jerseys to promos to team names. For most minor league teams, that wackiness begins with the nicknames. And all of those nicknames have a story behind them.

One of the more intriguing ones visits Cashman Field on Thursday to open a four-game series with the 51s. The Albuquerque team is known as the Isotopes and can thank “The Simpsons” for their moniker.

Likewise, nearly every Pacific Coast League has a story behind its nickname, including the home team 51s, who were previously known as the Las Vegas Stars, the Spokane Indians and the Portland Beavers.

In honor of Homer and Marge, we reveal the story behind every PCL nickname.

A 2001 episode of “The Simpsons” provided the inspiration for the team’s name.

In the episode “Hungry, Hungry Homer,” Homer uncovers a plot by the Springfield Isotopes baseball team to move to Albuquerque and attempts to stop them by going on a hunger strike.

When the real team moved from Calgary, Alberta, it worked with the Albuquerque Tribune, which conducted a name-the-team contest. Isotopes was submitted and won with 67 percent of the vote.

The name works because of the area’s history of nuclear technology. However, the Isotopes Park pays homage to “The Simpsons” with statues of Homer, Marge, Bart and Lisa.

Many teams get their nickname from their affiliate.

However, these Colorado Spring Sky Sox never have been affiliated with the Chicago White Sox or Boston Red Sox.

The original Colorado Springs Sky Sox, however, were. They played in the Western league from 1950 to 1958 and were affiliated with the White Sox.

When these Sky Sox began in 1988 — moving from Honolulu as the Hawaii Islanders — they adopted the name as the Triple-A team for the MLB expansion Colorado Rockies.

The franchise has had many names, but when it moved to El Paso, it changed its name — which most recently had been the Tucson Padres — to the El Paso Chihuahuas.

Fans were allowed to vote for the name, and Chihuahuas, in part a nod to the state of Chihuahua in Mexico, which borders Texas, won out.

The Grizzlies were named in part because Yosemite National Park is about 60 miles from Fresno, California.

The Grizzlies transform into the Fresno Tacos on Tuesdays when they are at home.

It shouldn’t come as any surprise why the Iowa Cubs have their current moniker.

They are one of four Triple-A teams that hold the same name as their parent club.

They’ve also taken up the same color scheme, their logo is the same but with the additional “Iowa” written on it, and they have a Cubbie Bear mascot.

They’ve had the name since 1982, a year after the Cubs’ affiliation began. Before that, they were the Iowa Oaks for 14 seasons.

The local team got its name and mascot from Area 51, located about 80 miles from Las Vegas.

Area 51 is a U.S. military facility, though little is known about the activity that happens there, prompting wild conspiracy theories, including many involving aliens.

The 51s mascot, Cosmo, is an alien. Before being named the 51s, the team was the Stars for 18 seasons.

The Memphis Redbirds’ nickname is a reference to their parent club, the St. Louis Cardinals, which they’ve been affiliated with since their inception in 1998.

Their jerseys, logo and color scheme also mirror the Cardinals’.

The “Nashville sound,” a subgenre that was created in the 1950s, transformed country music, moving it toward pop and jazz and away from folk.

The team’s logo is a large “N” inside a guitar pick.

The name has stuck for three leagues and eight major league affiliations.

The New Orleans Zephyrs became the Baby Cakes last offseason in tribute to king cakes, a dessert that is an important part of Mardi Gras celebrations.

A small baby figure is often hidden inside the cake.

The name drew a lot of attention for the team and has boosted merchandise sales.

It’s not hard to figure out where the Oklahoma City Dodgers got their name.

In 2015, the former Oklahoma City RedHawks were sold to the Los Angeles Dodgers, who promptly changed the team’s name, logo and color scheme to match the parent club’s.

The team changed its name from 1999 to 2001 to the Golden Spikes to pay tribute to the city’s railroad ties.

After changing back to the Royals, the franchise gave fans a chance to submit names in 2010.

Team officials sifted through more than 1,400 suggestions to cut that list to 24, and through a fan vote, Storm Chasers won out, becoming the team’s name in 2011. After all, this team plays in the middle of the country’s tornado alley.

When the franchise relocated to Reno from Tucson, it changed its name from the Tucson Sidewinders to Reno Aces.

The Aces took their name in part as a nod to the state’s gaming industry and part in tribute to ace in the more traditional baseball sense — a team’s top pitcher.

Nolan Ryan, nicknamed “the Ryan Express,” is a part owner of the team, and the name is in part for him.

The city also has longstanding ties to the railroad industry. The Express have had their nickname since 2005.

The Vancouver Canadiens moved there in 1999, and a team official said the name was suggested as part of a contest and grew in popularity.

By the way, the team plays at Raley Field, which sits beside the river in West Sacramento.

After playing for years as the Salt Lake Buzz and then changing their name to the Salt Lake Stingers, the Bees finally got their current name in 2006.

It pays tribute to the Salt Lake City Bees, a minor league franchise from 1911 to 1984 that held many names, including the Bees. Also, Utah is the “Beehive State,” and there is a beehive depicted on the state flag.

Through the years, Tacoma’s minor league team has had many names, often imitating that of its parent clubs (Giants, Cubs, Twins, Yankees).

In 1995, when it became affiliated with the nearby Seattle Mariners, it took its current name.

Tacoma is a 60-mile drive to Mount Rainier National Park, and the mountain is visible from the city.

Before the Tacoma Rainiers took up their current nickname, there was a team called the Seattle Rainiers.