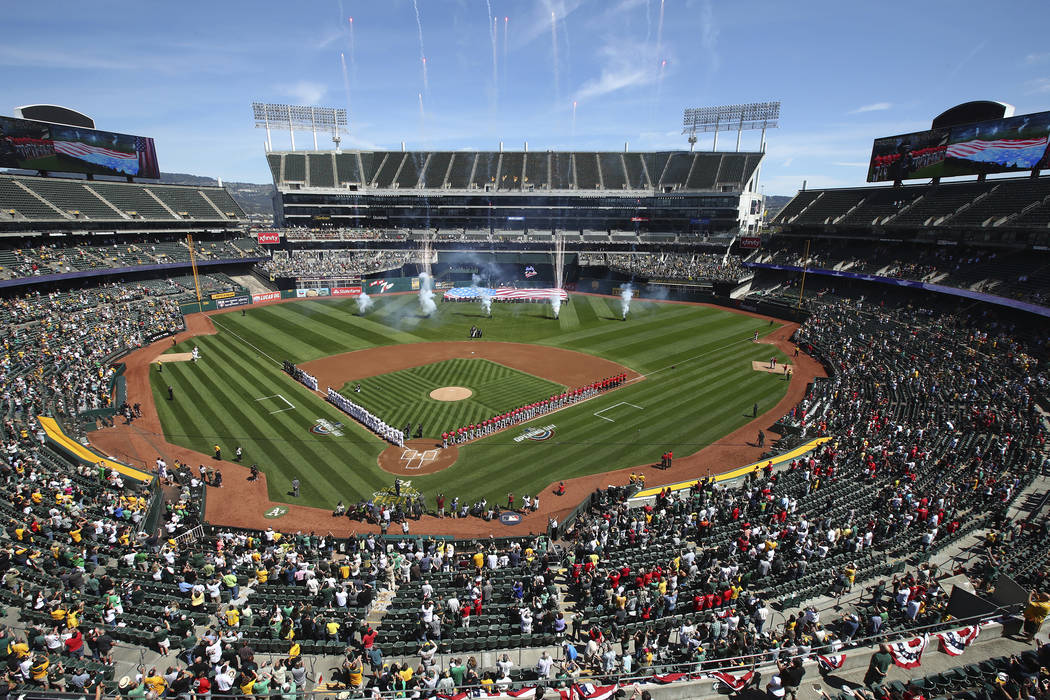 The Los Angeles Angels and the Oakland Athletics stand for the national anthem at Oakland Coliseum prior to an opening day baseball game on Thursday, March 29, 2018 in Oakland, Calif. (AP Photo/Ben Margot)

Major League Baseball Commissioner Rob Manfred in early October told Oakland officials that the Athletics could move to Las Vegas if the city doesn’t drop its lawsuit over the sale of land at Oakland-Alameda County Coliseum, according to a story in San Francisco Chronicle.

On Wednesday, according to the San Jose Mercury News, Oakland decided to just do that, dropping the lawsuit against Alameda County meant to kill the deal between the county and the A’s over the Oakland Coliseum.

The Mercury News reported that city council members made the decision during a special closed session meeting held Wednesday afternoon — the day before the city’s attorneys and the county’s attorneys were scheduled to battle in court over whether Alameda County Superior Court Judge Frank Roesch should grant a preliminary injunction against the county. The injunction would have extended a temporary restraining order issued on Oct. 1 barring the sale of the county’s half-ownership share of the coliseum to the A’s for $85 million.

After the city filed its lawsuit in September, the A’s offered the city the same deal — but only if the lawsuit was dropped. The city officially began negotiating the deal with the A’s last week.

A’s president Dave Kaval, in a statement issued Wednesday evening, said he looks forward to finalizing agreements with both the city and the county. The baseball team wants to convert the complex to a mixed-use development to help it finance the construction of a 35,000-seat waterfront ballpark along the estuary near Jack London Square.

In recent months, the Review-Journal reported that both Las Vegas and Henderson have entered nondisclosure agreements to discuss the possible relocation of the Arizona Diamondbacks to Southern Nevada. And the Athletics are the parent ballclub for the Triple-A Las Vegas Aviators, who recently built a ballpark in Summerlin. But there has been no evidence of the A’s making overtures to relocate to Nevada.