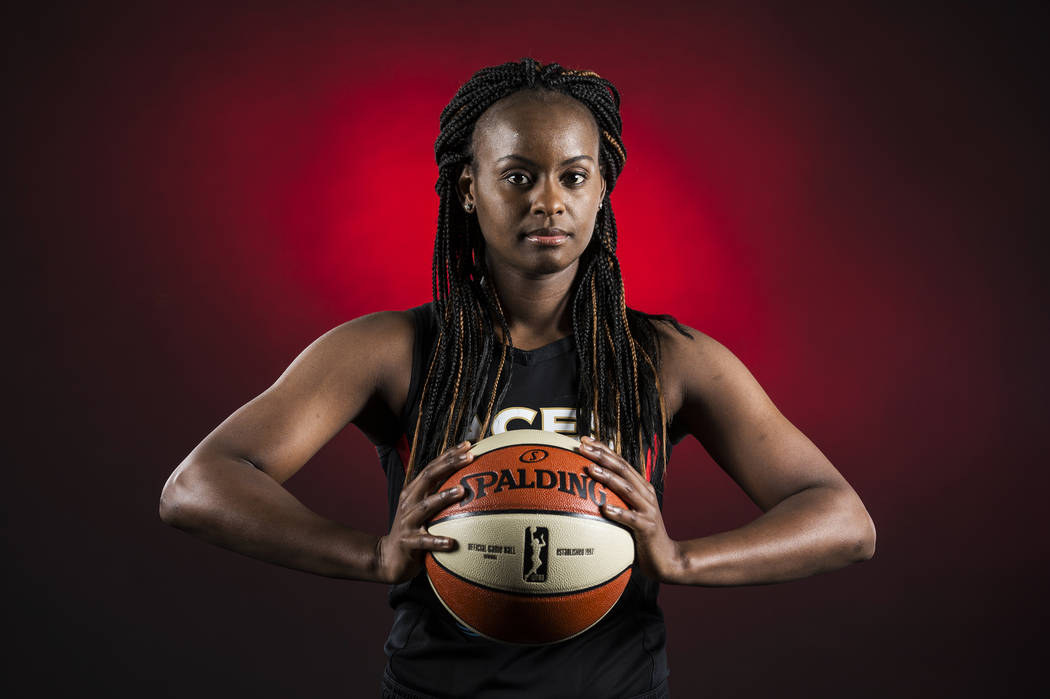 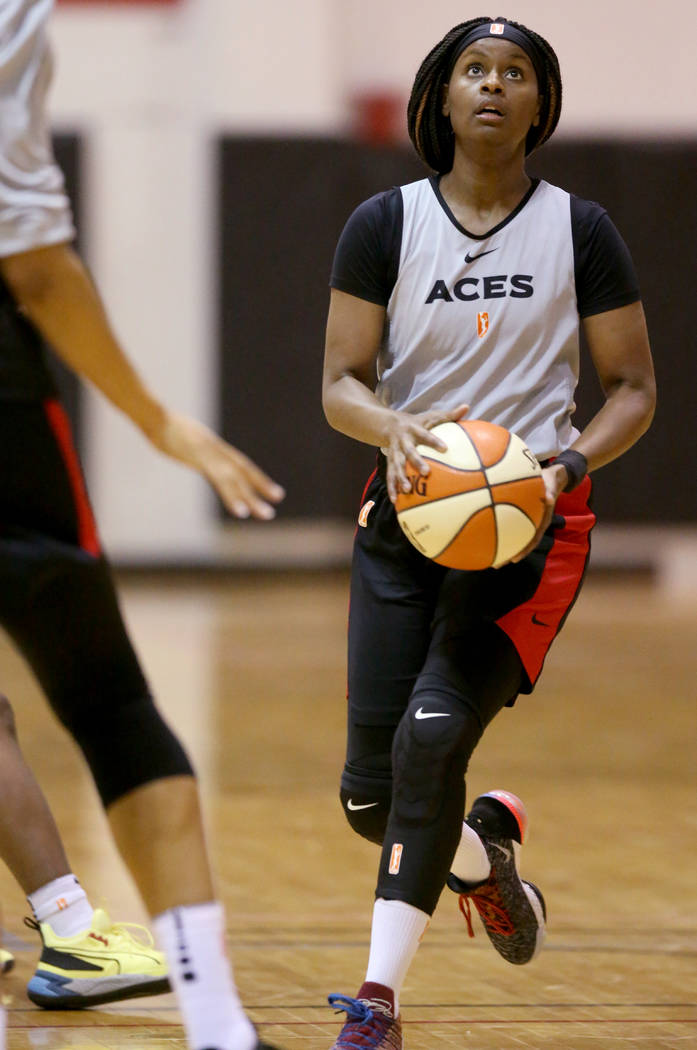 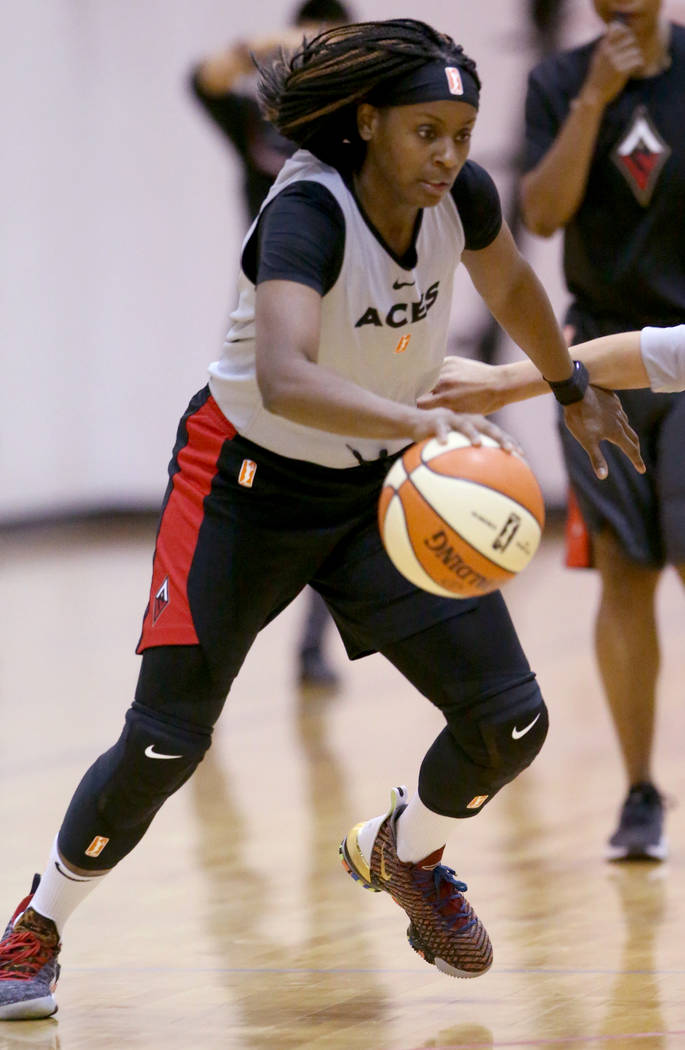 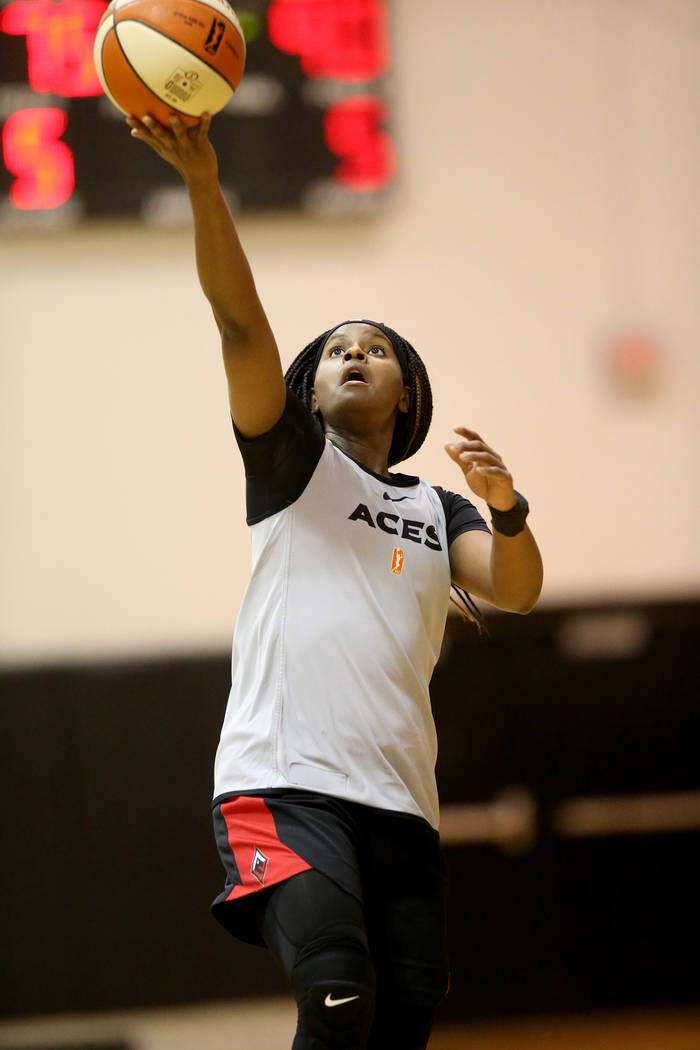 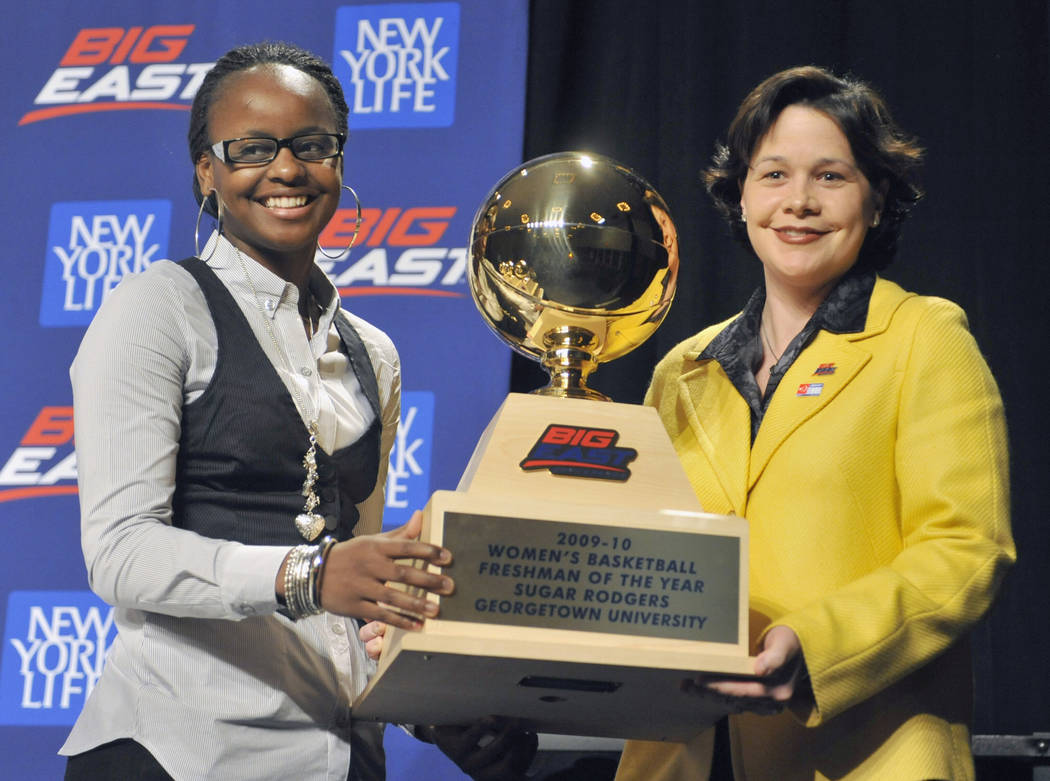 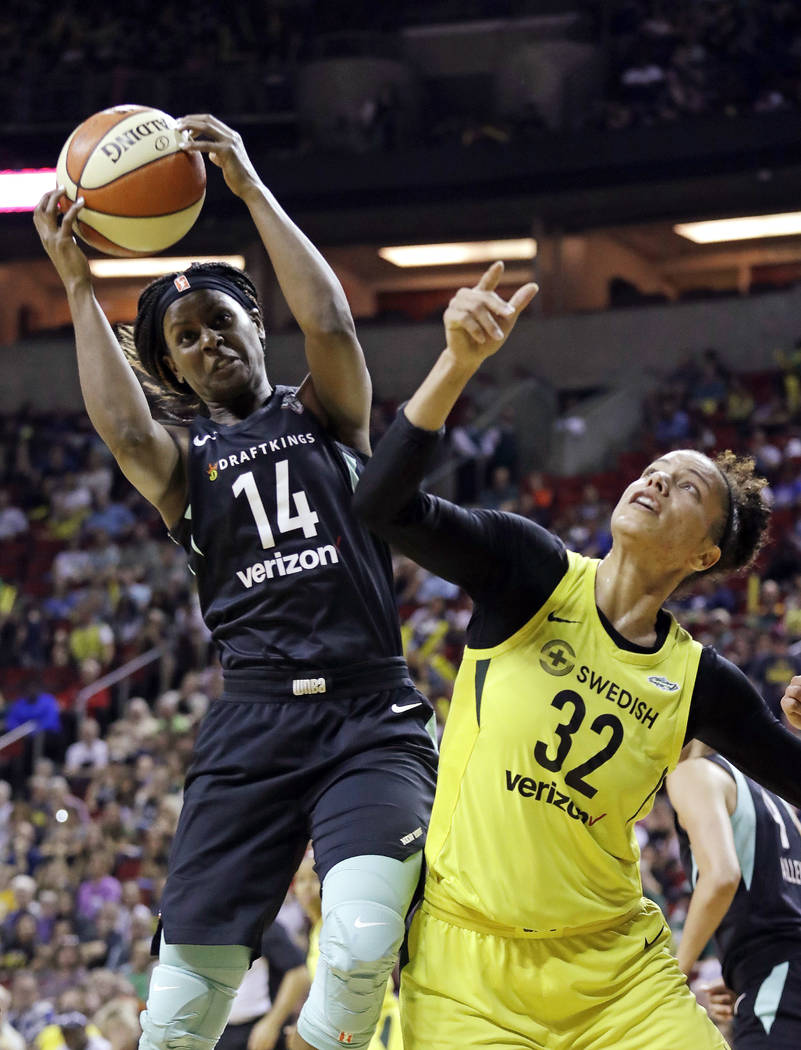 New York Liberty's Sugar Rodgers (14) grabs a rebound next to Seattle Storm's Alysha Clark during the second half of a WNBA basketball game Friday, Aug. 17, 2018, in Seattle. The Storm won 85-77. (AP Photo/Elaine Thompson) 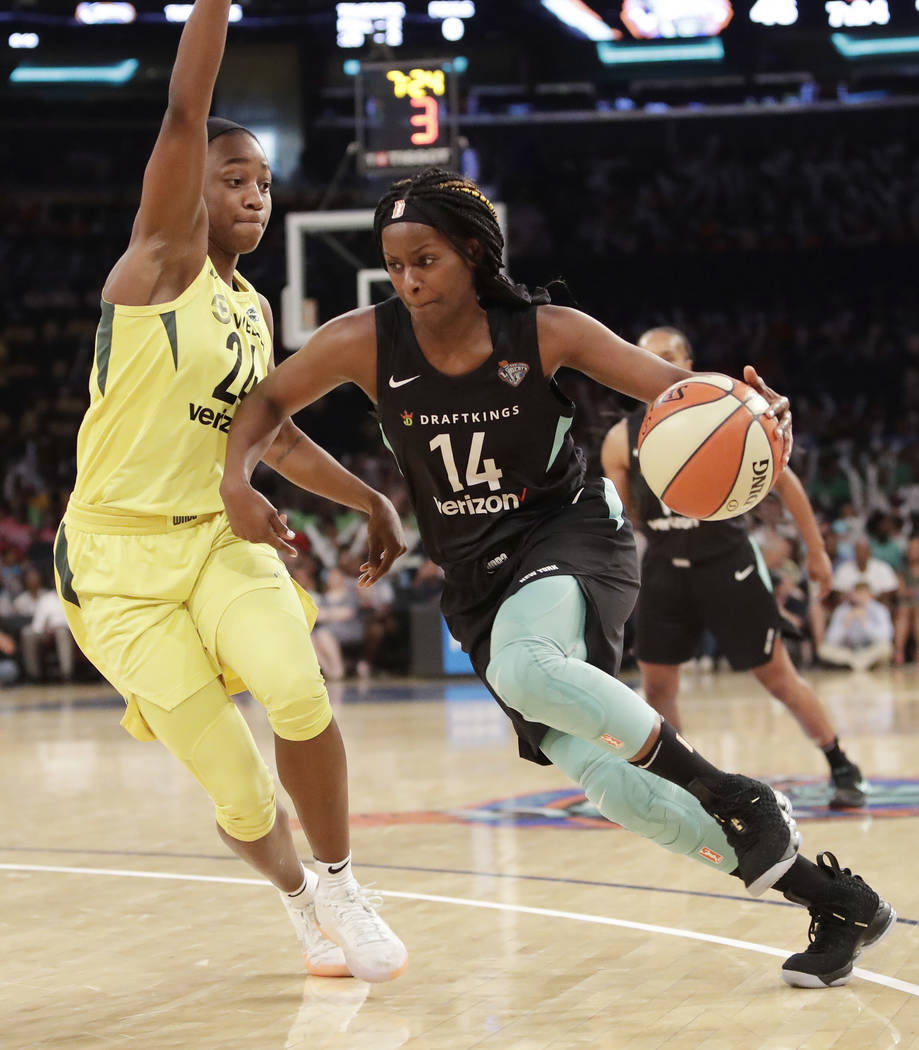 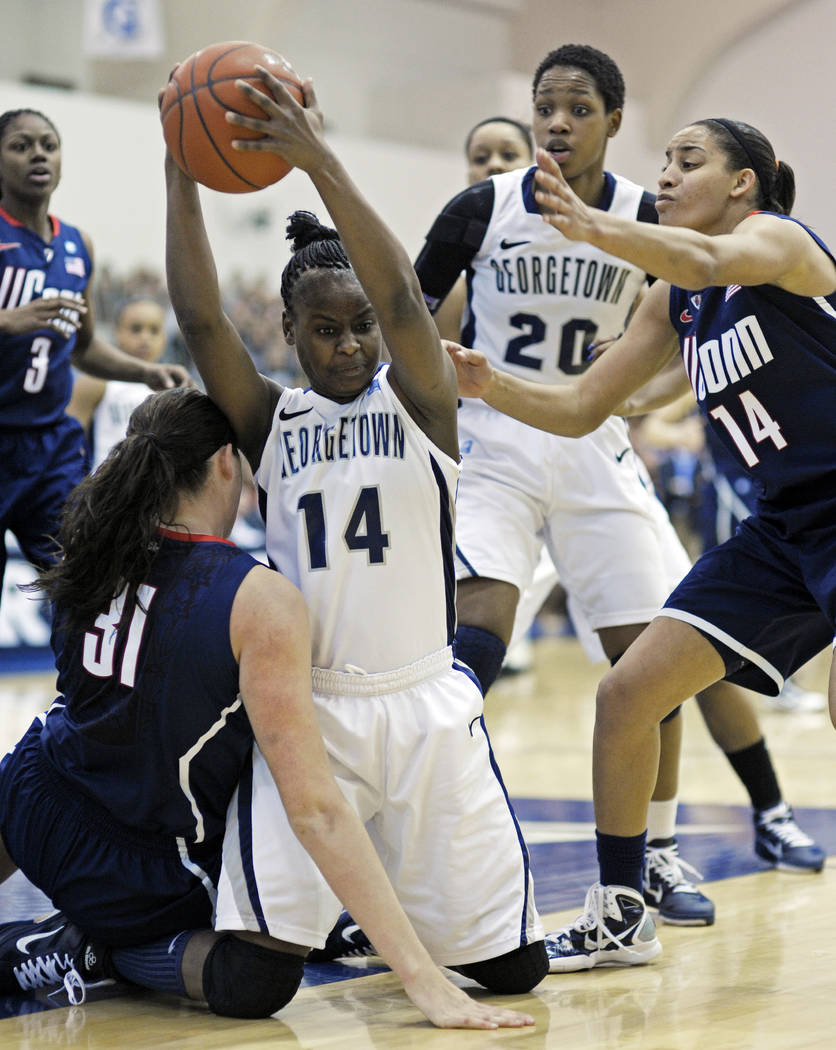 One of Sugar Rodgers’ favorite expressions is “crabs in a bucket.” It’s not a culinary craving, explains one of the newest additions to the Las Vegas Aces, but more of a metaphor for what drives her in life.

It’s what makes her one of the best guards in the WNBA, whose talents will be on full display Sunday when the newly configured team tips off its second season in Las Vegas against the Los Angeles Sparks at Mandalay Bay Events Center.

When a crustacean tries to climb out of a confined environment, the others reach up to pull it back down.

She’s seen it; she’s lived it. She’s determined to conquer it.

Rodgers, 29, grew up in a gritty, crime-ridden corner of Suffolk, Virginia.

She focused on her game and got good enough to get out of the hood. But during a visit after turning pro a few years ago, she was reminded that she would never really be free from its grip.

While staying with relatives, four men broke in. One wearing a red hoodie put a gun to her forehead while they robbed the place.

Memories of that night still haunt Rodgers, who still checks and rechecks the locks on her doors before going to sleep — even when staying at fancy hotels with the team.

But she does not harbor ill will for the desperate man in the red hoodie.

“It’s easy to get caught up,” she says. “The people you surround yourself with, it’s like crabs in a bucket.”

Ta’ Shauna Rodgers — an uncle nicknamed her Sugar when she was a toddler — grew up in a public housing project. Her mom, Barbara Mae, worked two jobs to provide for her children and a grandchild after Sugar’s sister was sent to prison for selling drugs. Her brother was in and out of prison, too, for the same crime.

But her brother had put up an old wooden backboard in front of the house. That’s where Sugar learned to sink 3-pointers.

That old backboard and crooked rim became the neighborhood hangout. Rodgers would sometimes use her modest allowance to hustle money from drug dealers by playing H-O-R-S-E.

She usually wound up using the money to care for her mother, who had become too sick to work.

There was a drug bust at the house. The cops put her mom in a nursing home. Barb Mae died of lupus when Sugar was 14.

“It felt like I wasn’t loved anymore,” she said.

The house was condemned. The teenager started bouncing around, staying here and there, with this cousin or that one, or maybe one of her coaches. Whoever would take her in. Wherever she could lay her head.

Basketball was her refuge.

She played to honor her mother’s memory, and to keep her mind off an uncertain future. As long as there was time on the clock, she didn’t worry about where she would sleep that night or when McDonald’s might be hiring again.

“I was treated bad some nights,” she said. “I would lie awake and say ‘Tomorrow is going to come; it’s going to be different.’

“But sometimes it would be the same.”

After she stopped taking money from dope dealers by sinking baskets on the front stoop, Rodgers starred for King’s Fork High School in Suffolk, where she became a Parade All-American. But she said joining Boo Williams’ AAU team during summertime proved to be the biggest impetus in her basketball development.

“She was a kid that wanted to compete,” Williams said. “She was our MVP coming off the bench. I’ve been doing this for 39 years. I’ve had two Hall of Famers (Allen Iverson and Alonzo Mourning), and having a(n) MVP come off the bench is something that’s never heard of.”

Williams is from the same part of Suffolk (Williamstown) as his protege, but said they grew up worlds apart.

“I had a mother and a father, and my father worked every day,” he said. “For her to do what she’s done is amazing. She knows what tough times are about.”

Williams had been a star at Saint Joseph’s in Philadelphia. He had college contacts. His sister, Terri Williams-Flournoy, was the Georgetown women’s coach.

“I ended up getting a scholarship to Georgetown,” Rodgers said. “I said, ‘Where the hell is Georgetown?’

“It was the best thing that could have ever happened — to go to one of the most prestigious schools in the country, which Georgetown is. I was going to be the first in my family not only to graduate (college) but even attempt to go. It was a big deal for me and my family.”

It was a big deal for Georgetown, too.

Sugar Rodgers was a four-time All-Big East selection at Georgetown, scoring a school-record 2,518 points. She also set school records for most 3-pointers and steals and graduated with a degree in English. (Jim R. Bounds/The Associated Press)

Rodgers was a four-time All-Big East selection who scored a school-record 2,518 points — more than Sleepy Floyd and Patrick Ewing. She also set school records for most 3-pointers and steals and graduated with a degree in English.

“For the first time in about 10 years, me and my brother and my sister were in the same area, together, and that was for my graduation,” Rodgers said.

She was drafted 14th overall by Minnesota in 2013. After spending a season mostly sitting on the bench for the WNBA-champion Lynx, she was traded to the New York Liberty, where she blossomed under then-Liberty and now-Aces coach Bill Laimbeer. Even if she didn’t mind him all the time.

“I’ve been through some tough times, so sometimes when Bill yells at me I’m like ‘Bill, OK, (whatever),’” she says with a chuckle. “Sometimes yelling bothers people. It doesn’t bother me. I take what I need and I keep moving.”

Laimbeer said as long as Rodgers keeps moving and sinking long jump shots, there probably won’t be a whole lot of yelling from the bench. Or at least no more than usual.

“Smart player, great teammate and she plays defense, which is a positive,” the Aces’ coach said. “But we got her for her 3-ball. Last year we were short from the 3-ball line for volume and accuracy. That’s why we got her.”

As for making it out, as Rodgers calls the odyssey of overcoming humble beginnings to play basketball as a professional, Laimbeer said you can’t help but be impressed.

“She picked herself up and persevered, that’s the hard part — just to push yourself through a lot of adversity,” Laimbeer said. “But at the same time, she has a lot of confidence in herself. I think that’s what has carried the day for her.”

“You get caught up in it. … The violence, the gang-bangin’. The sellin’ drugs, whether you use drugs. My sister was a drug dealer. She got caught up. She got hit with a tough sentence. I couldn’t imagine doing 10 years in prison, locked down 23 hours a day.”

Rodgers says it’s a lot easier providing spark off Laimbeer’s bench than it is being a crab in a bucket.

“I try not to think about it,” she says about how her life might have turned out without basketball. “When I go back (to Suffolk) now, I see some of those faces that will have the same opportunity as me.”

She wonders if they’ll be able to make it out before the other crabs drag them down.

“You get caught up in it,” Rodgers says. “The violence, the gang-bangin’. The sellin’ drugs, whether you use drugs. My sister was a drug dealer. She got caught up. She got hit with a tough sentence. I couldn’t imagine doing 10 years in prison, locked down 23 hours a day.”

A sister, a brother, multiple nephews. They got caught up. They made mistakes. They told Rodgers not to make the same mistakes. Find something you love, said her favorite niece, Ebony. Let it be your guide, your inspiration, your reason not to get dragged back into the bucket.

“My niece had her sons,” Sugar Rodgers says. “She said that I have basketball.”