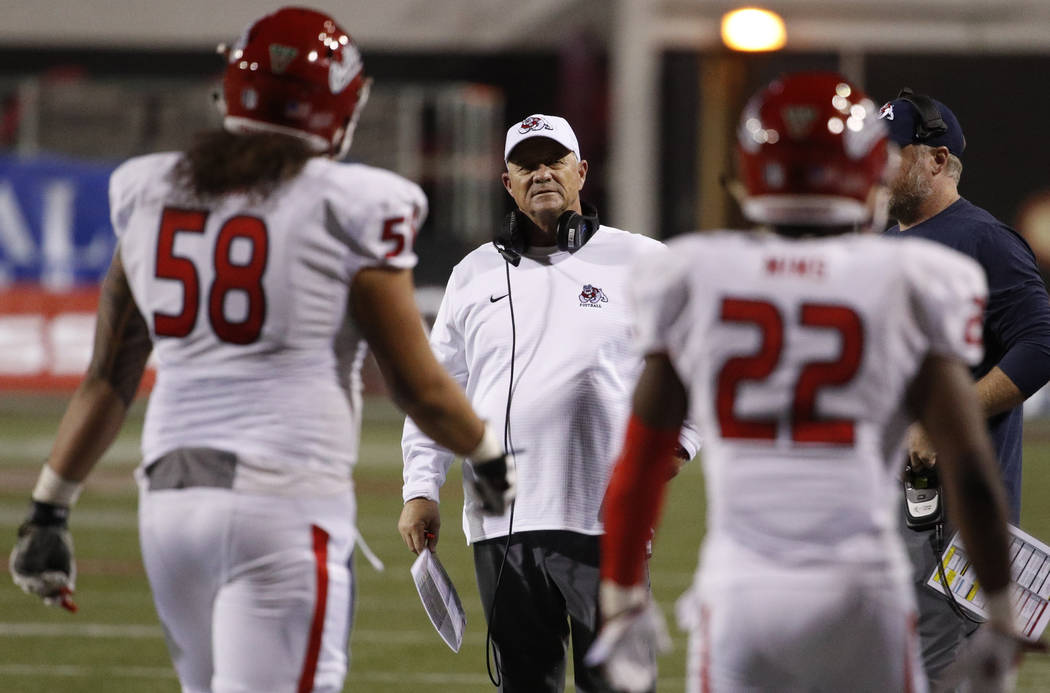 Fresno State Bulldogs head coach Jeff Tedford looks at players after a play against the UNLV Rebels during the second half of an NCAA college football game Saturday, Nov. 3, 2018, in Las Vegas. (AP Photo/John Locher) 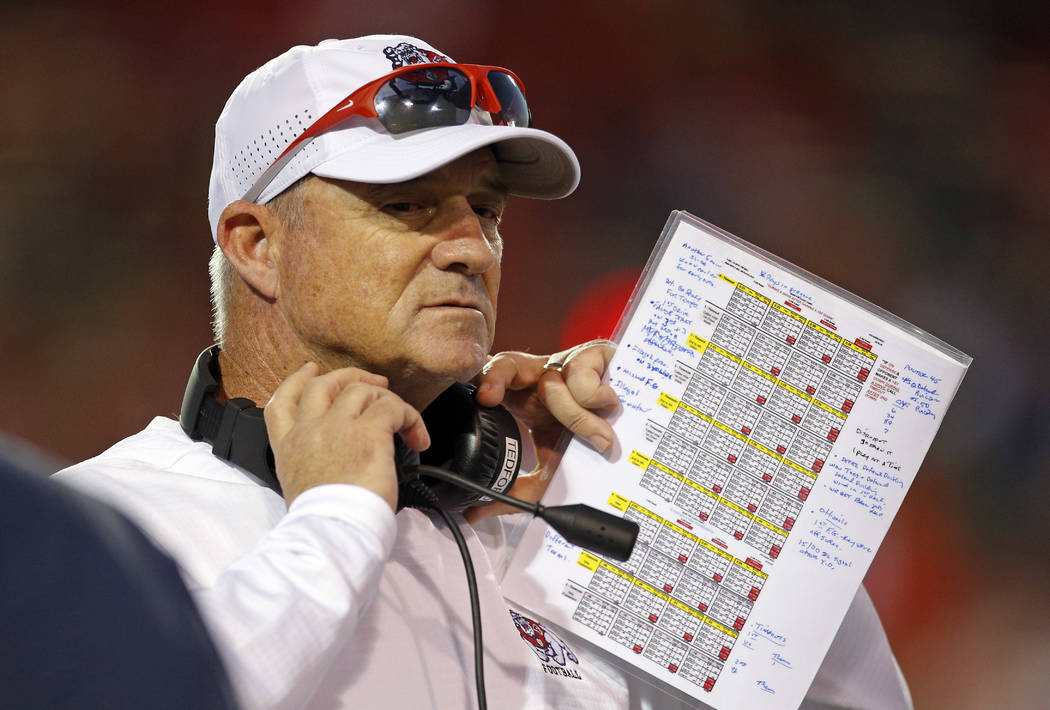 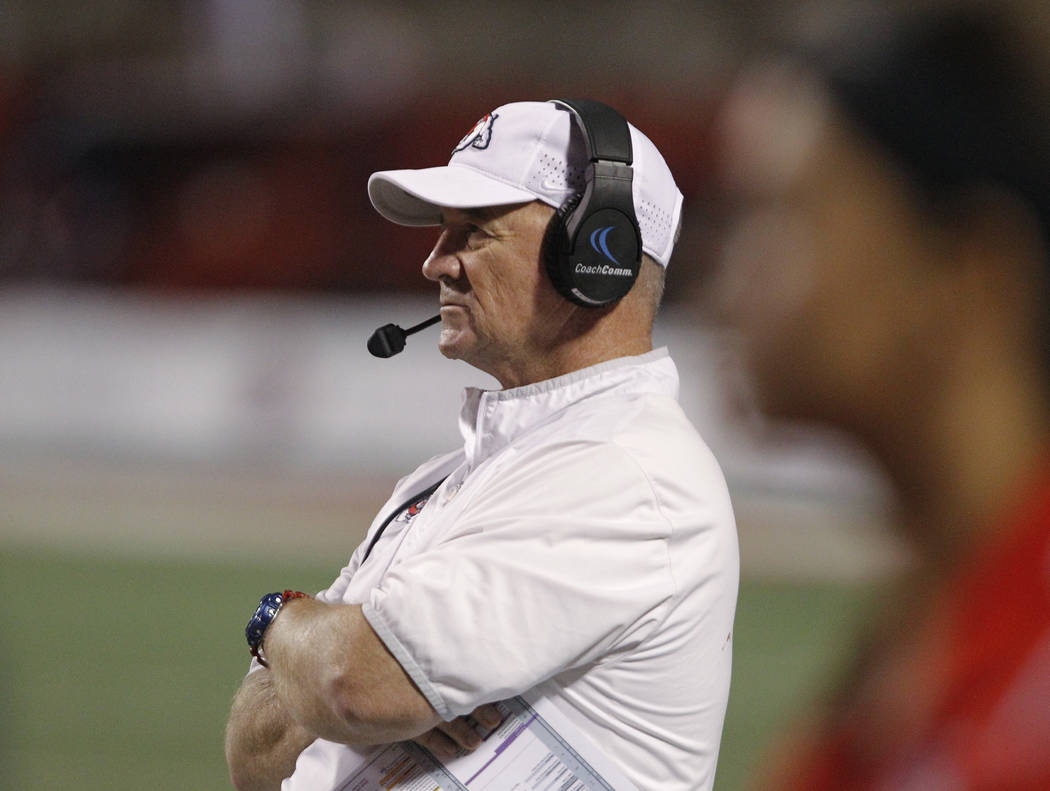 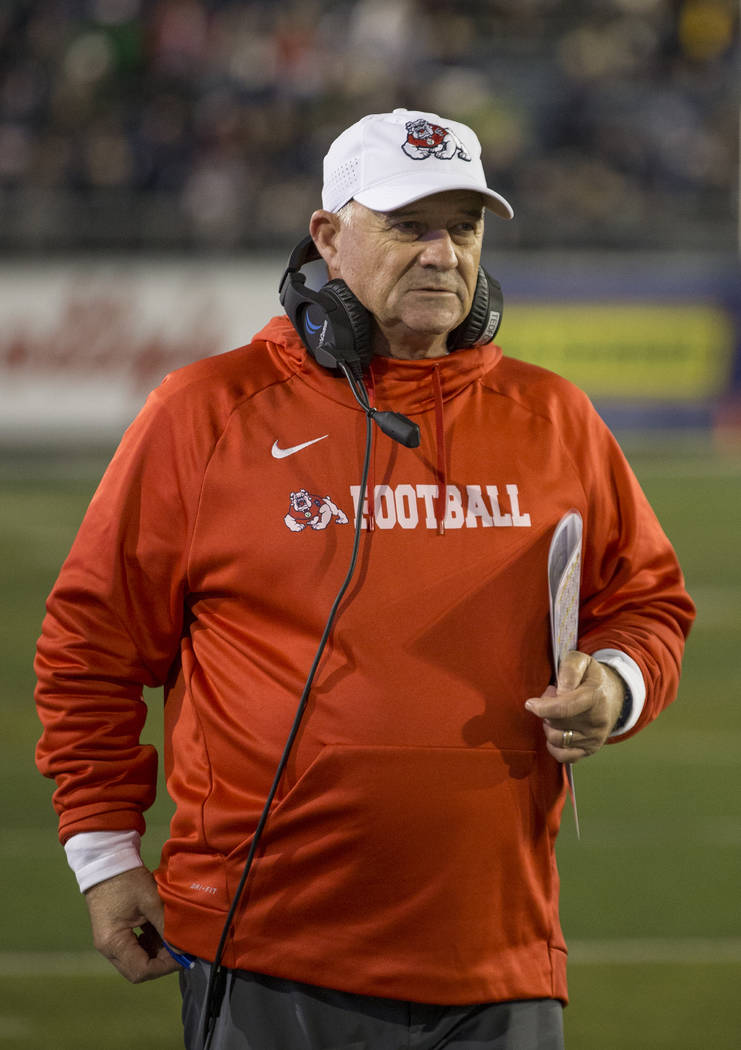 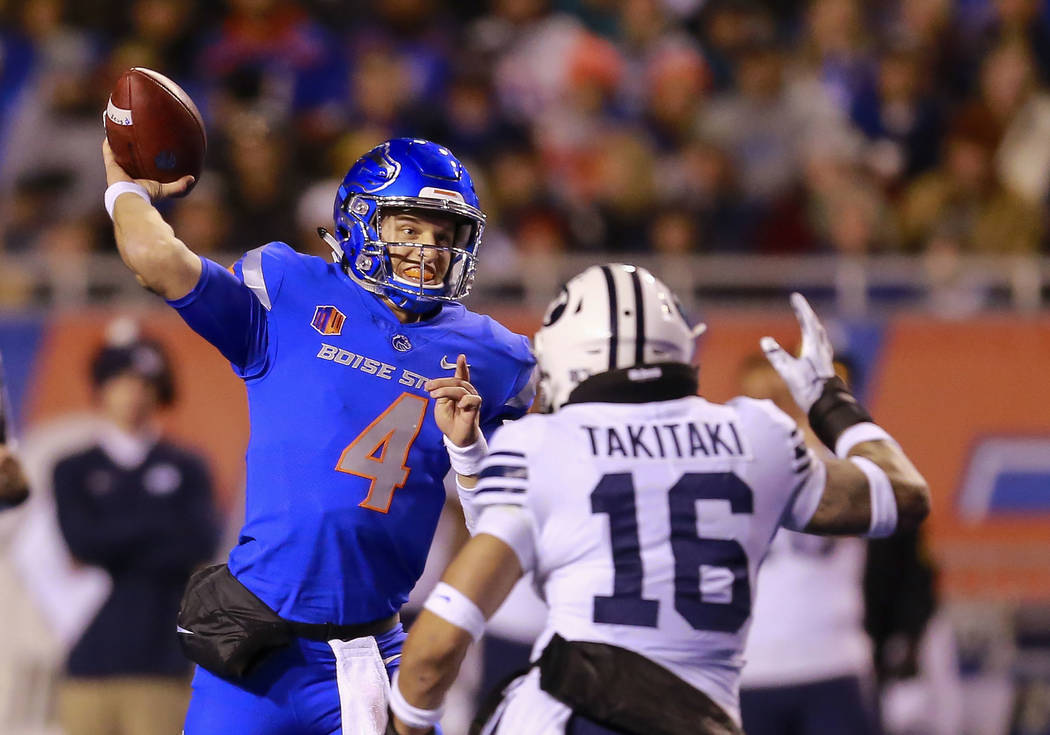 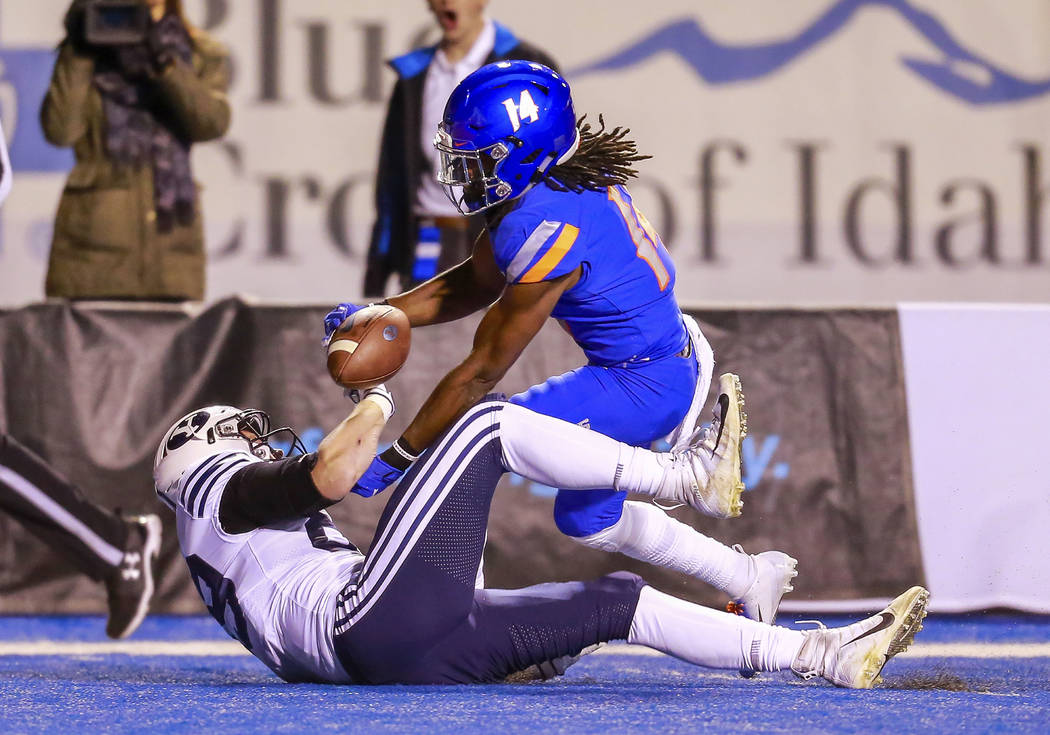 Boise State cornerback Tyler Horton (14) strips the ball away from BYU tight end Matt Bushman (89) in the second half of an NCAA college football game, Saturday, Nov. 3, 2018, in Boise, Idaho. Horton recovered the ball in the end zone for a touchback. (AP Photo/Steve Conner) 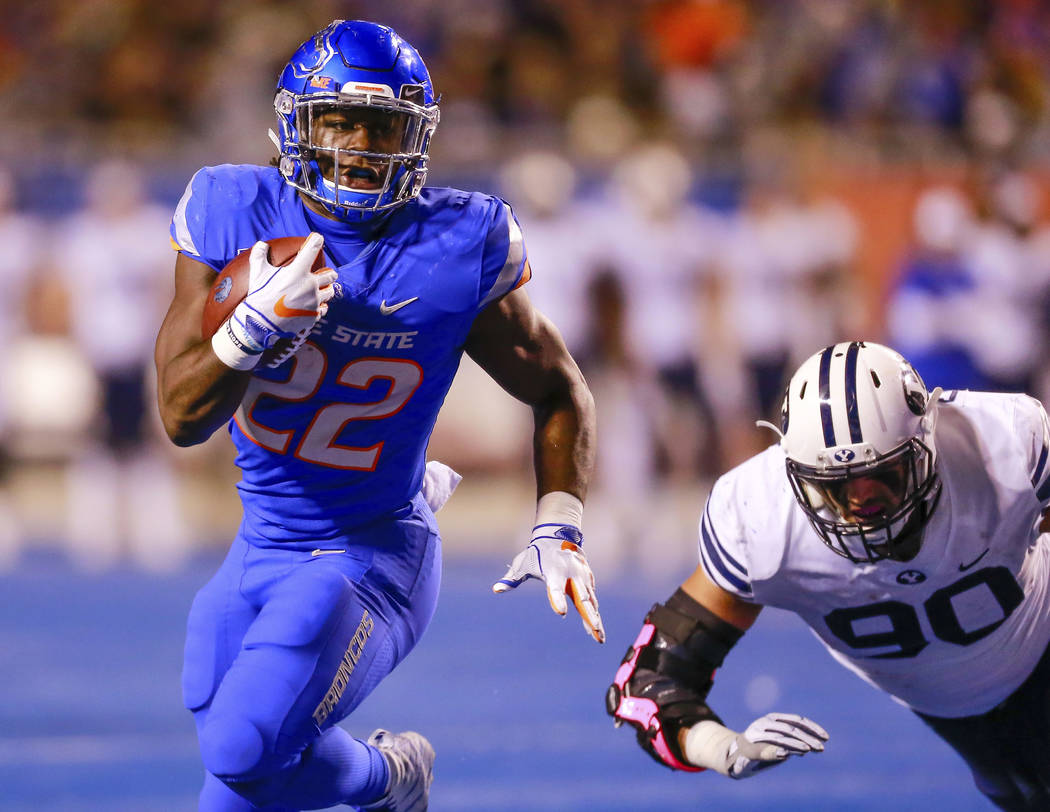 Louisville at Syracuse (-20½): Louisville is 1-8 against the spread this season and 6-20 ATS since early 2016. But the Cardinals have won and easily covered their last four games against the Orange, who are 2-1-1 ATS as Carrier Dome chalk this season. Edge: Syracuse.

Clemson (-20) at Boston College: The Tigers are surging with wins and covers in their last four games and trounced the Eagles the past two years. But Boston College is on a 16-2 cover streak in the regular season and is 7-1 ATS in its last eight games as an underdog. Edge: Clemson.

Texas Christian at West Virginia (-11½): The Horned Frogs are on a 2-10 spread slide. The Mountaineers have covered four of the last five meetings. Edge: West Virginia.

Oklahoma State at Oklahoma (-20½): The Sooners have won and covered the last three meetings and also have covered their last five Big 12 home games. The Cowboys are on a 5-10-1 spread slide in Big 12 games. Edge: Oklahoma.

Washington State (-6) at Colorado: The Buffaloes are on a four-game losing streak (1-3 ATS) overall and are on a 3-8 spread slide at home. But the home team has won and covered handily the last three meetings. The Cougars are 4-0 ATS on the road this season and on a 21-10 cover streak as visitors. Edge: Washington State.

Illinois at Nebraska (-17): The Huskers are on a 4-0 ATS surge. The Illini are on a 2-6 spread skid as Big Ten road underdogs. Edge: Nebraska.

Louisiana State (-13½) at Arkansas: The Tigers have covered the last two meetings after the Razorbacks covered the previous four. LSU is on a 5-1 cover streak in conference road games. Edge: LSU.

Ohio State (-3½) at Michigan State: The Buckeyes are on an 0-5 spread slide. The Spartans are on a 3-2 ATS uptick in the series but were crushed 48-3 last season. Michigan State is on a 20-8 ATS run as an underdog. Edge: Michigan State.

UNLV at San Diego State (-22½): The road team has covered the last four meetings. The Aztecs are 0-4 ATS as home chalk this season. The Rebels are on a 23-10 cover streak as road underdogs. Edge: UNLV.